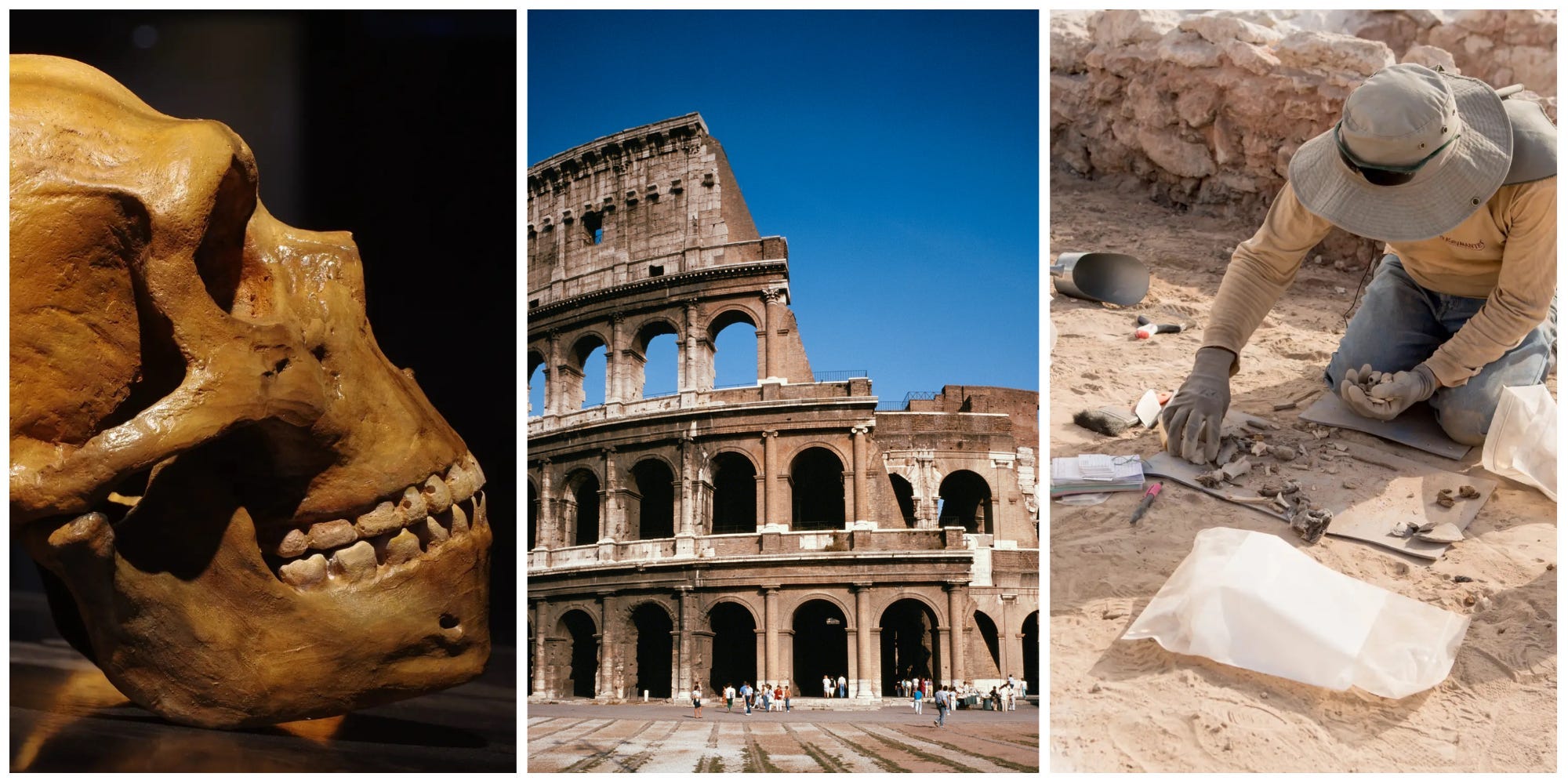 From left: A skull, the Roman Colosseum, and an archaeologist excavating for vilca seeds at the Quilcapampa site in Peru

In 2022, archaeologists discovered an array of lost treasures of the ancient world.

Insider’s coverage of the fascinating glimpses into humanity’s past included an engraving on an ancient ivory lice comb which is the oldest known sentence written in the first alphabet, the earliest known limb amputation, and ancient poop that contained new clues about feasts eaten at the construction of Stonehenge. Universities of Freiburg and Tübingen, KAO

Extreme droughts across the globe characterized part of 2022. While this did, in parts, cause ecological devastation and ravaged wildlife hotspots, it also revealed some incredible secrets that were hidden underwater.

In June, Insider’s Paola Rosa-Aquino reported that successive droughts had revealed the hidden city, which dates back to the Empire of Mittani. This kingdom controlled parts of northern Mesopotamia and Syria between 1550 and 1350 BC.

An earthquake destroyed the city. Experts say burial beneath the fallen walls might have helped preserve the ancient structures after years of submerging underwater.

You can read the full story on the hidden city here and learn about the ancient artifacts that survived over 3,000 years.

2,600-year-old pots of cheese found at the ancient necropolis of Egypt’s pharaohs 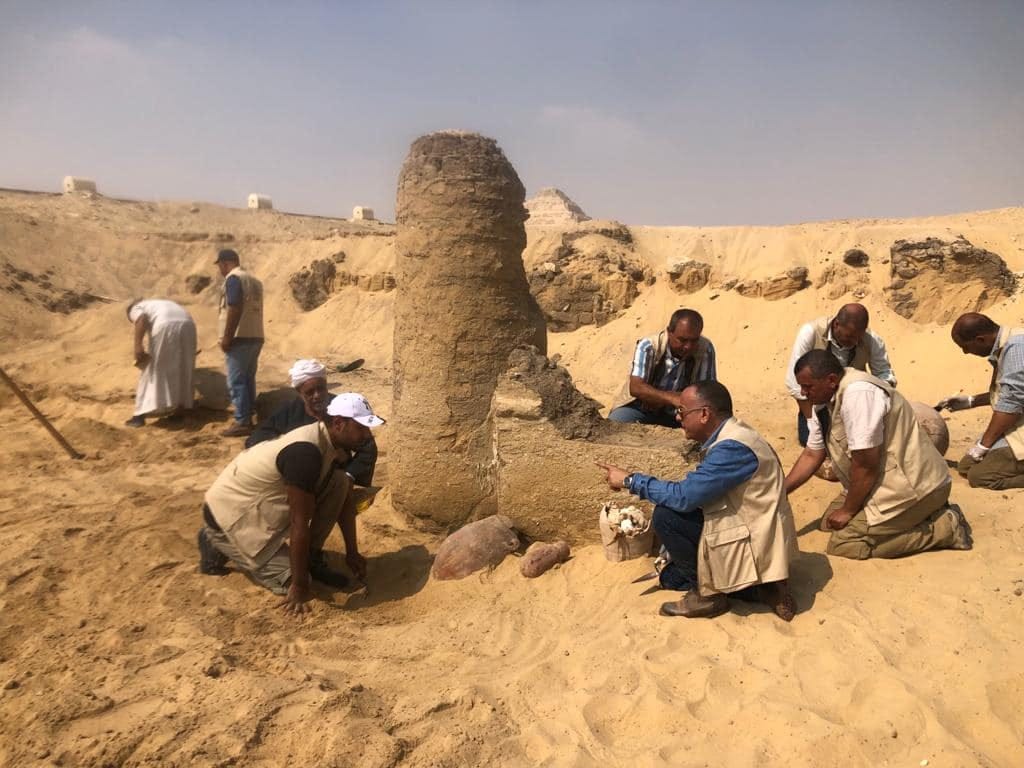 Excavations at the Saqqara necropolis in Egypt in September 2022.

Egypt’s Ministry of Tourism and Antiquities.

Another 2022 discovery came in the form of something many of us enjoy during the festive season: cheese.

The halloumi cheese was found inside pottery during a new round of excavations, which researchers believe dates back to 688 and 525 BC.

You can read the full story here and see what else researchers found on the site of  Egypt’s oldest pyramid.

Sausage dogs could have been made to fight bears in the Colosseum of ancient Rome, archaeologists said 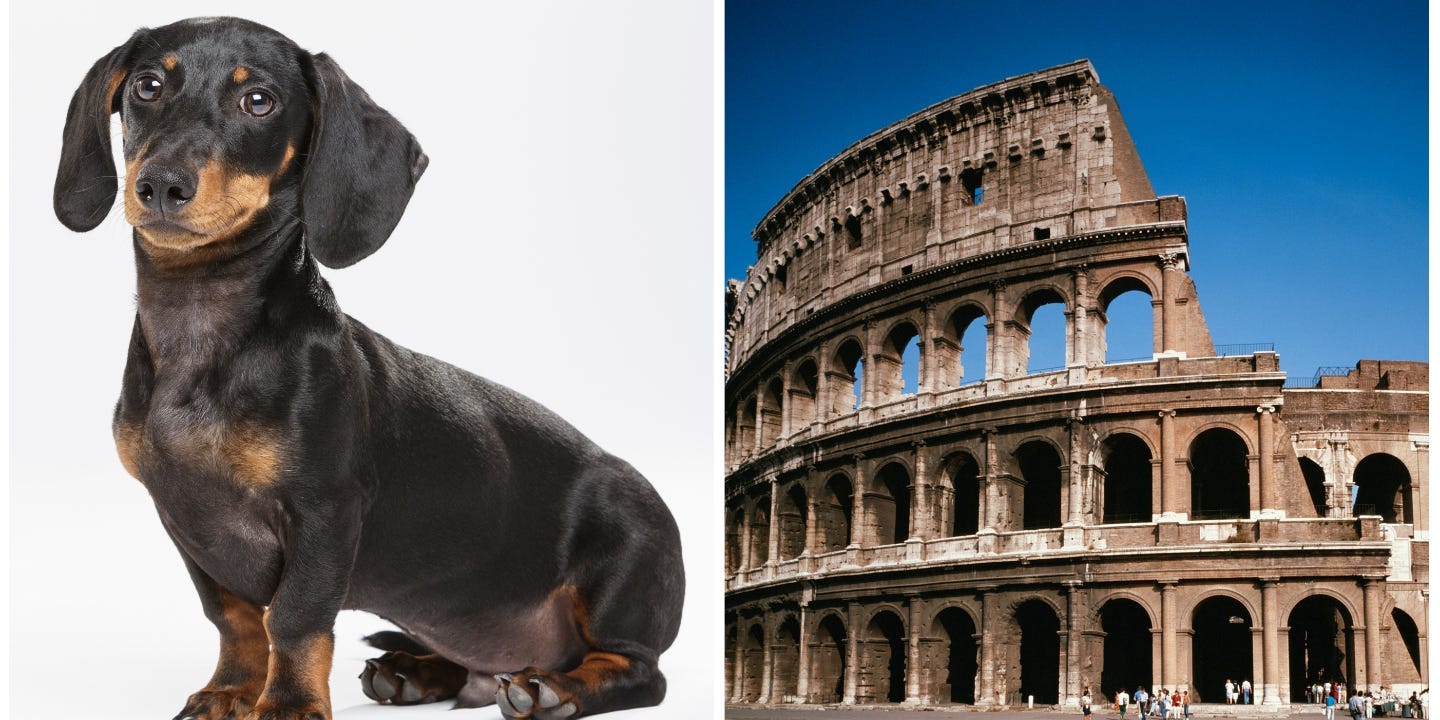 Insider’s Alia Shoaib reported that researchers in Rome had discovered the remains of small dogs similar to dachshunds while excavating the drains of the iconic 2,000-year-old amphitheater.

“They were less than 30cm [11.8 inches] in height. We think they may have been used to perform acrobatic tricks, just as you would see in a circus today. Or it may be that they were used as part of staged hunts or even pitched against bears and animals like that. We don’t know for sure,” researchers said.

After you’ve hugged your own canine friend, you can read the full story here.

Archaeologists have full-color portraits of Egyptian mummies in ancient Philadelphia 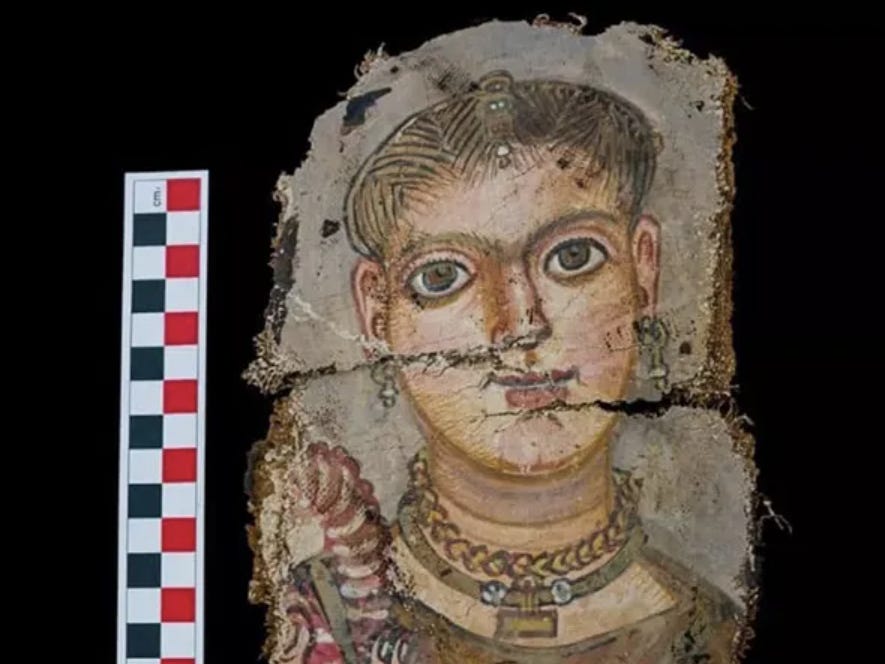 One portrait of a mummy discovered

Egypt’s Ministry of Tourism and Antiquities

A late entry to the list of archaeological discoveries comes from Egypt, where archaeologists uncovered full-color portraits of mummies in early December – the first to be found in over a century.

Researchers found the two full portraits of Egyptian mummies and fragments of others at the Gerza excavation site in Fayoum, Egypt.

English archaeologist Flinders Petrie was the last to find similar artwork when he discovered 146 mummy portraits at a Roman cemetery in 1911, Artnet News reports.

To discover what else the archaeologists discovered at the site, you can read the full story here.

Largest-ever stash of mummy-embalming tools found in Egypt, may have been for lavish funeral 2,600 years ago 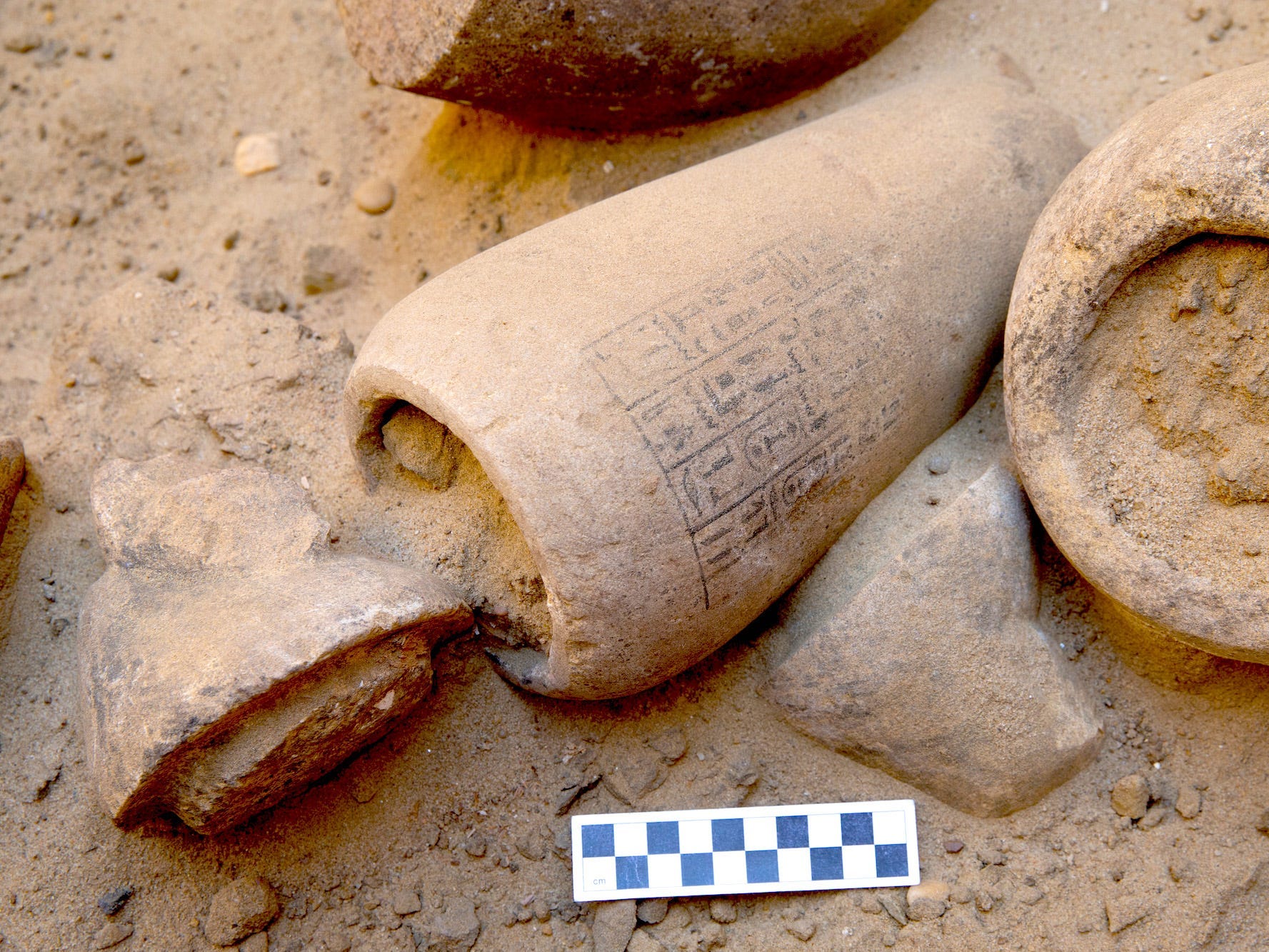 A jar found at the Abusir site.

Archive of the Czech Institute of Egyptology, photo Peter Košárek

Insider’s Marianne Guenot reported that 2022 saw the discovery of the largest-ever stash of mummy-embalming tools in Egypt — maybe not something you’re hoping to find o=under your Christmas tree.

The find offers clues into a lavish funeral that likely took place about 2,600 years ago.

Wojciech Ejsmond, an Egyptologist from the Warsaw Mummy Project, told Insider, “This is a really exciting and important discovery,” and will help fill in the gaps of knowledge of the embalming process.

You can read the whole piece here. 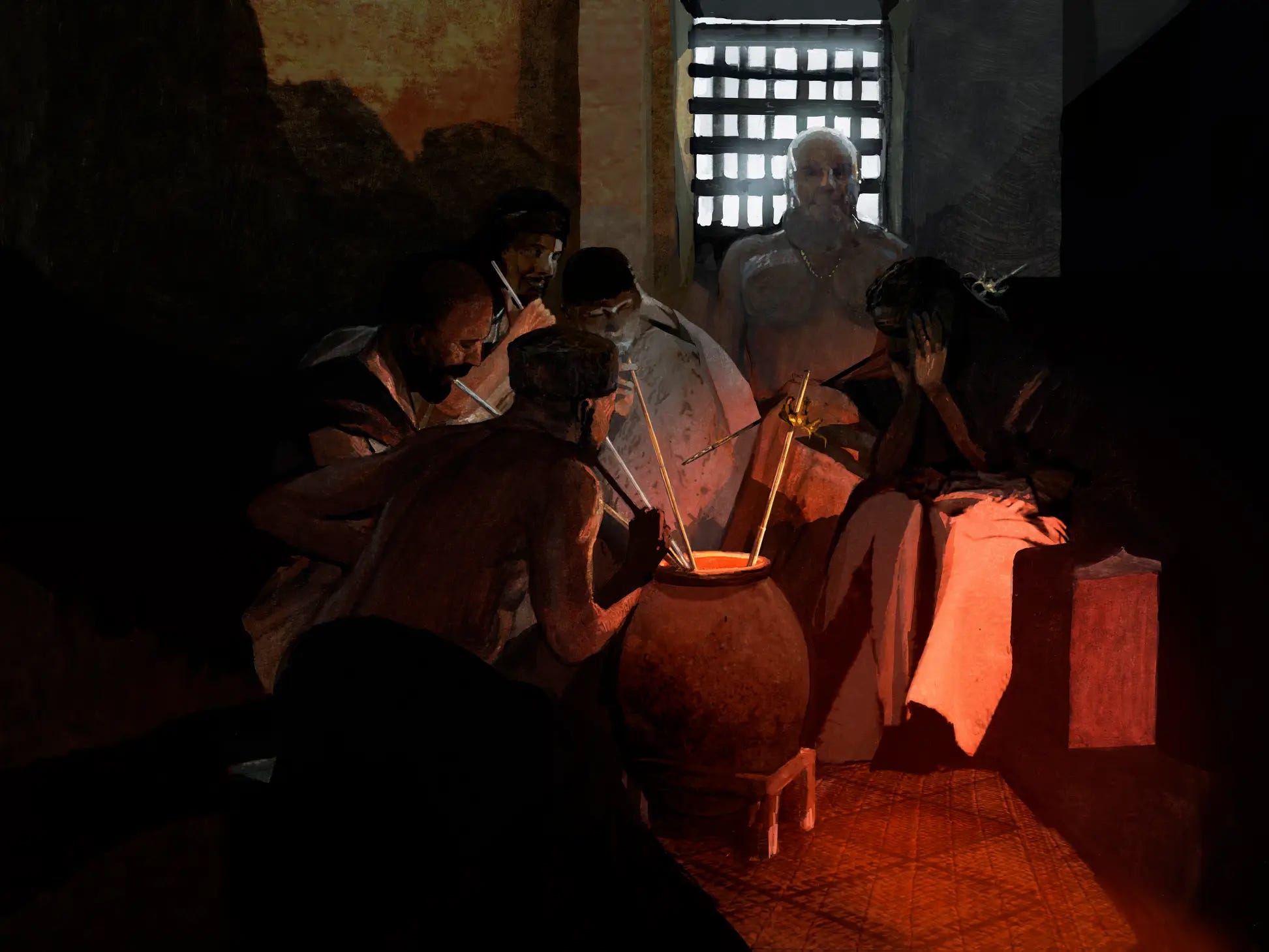 An illustration of ancient people drinking beer from a communal vessel with long straws.

2022 taught us that beer parties with pals are hardly a modern feat. Early this year, Insider’s Morgan McFall-Johnsen reported that the oldest-known straws on Earth — which were three-foot-long silver and gold tubes — were possibly used to drink beer out of communal pots.

These straws were discovered in an ancient burial mound called Maikop kurgan in South Russia.

You can read the full story here to learn about the party pieces discovered in the “most famous elite burial of the Early Bronze Age Caucasus.”

You can read more about the insight into ancient parties here. 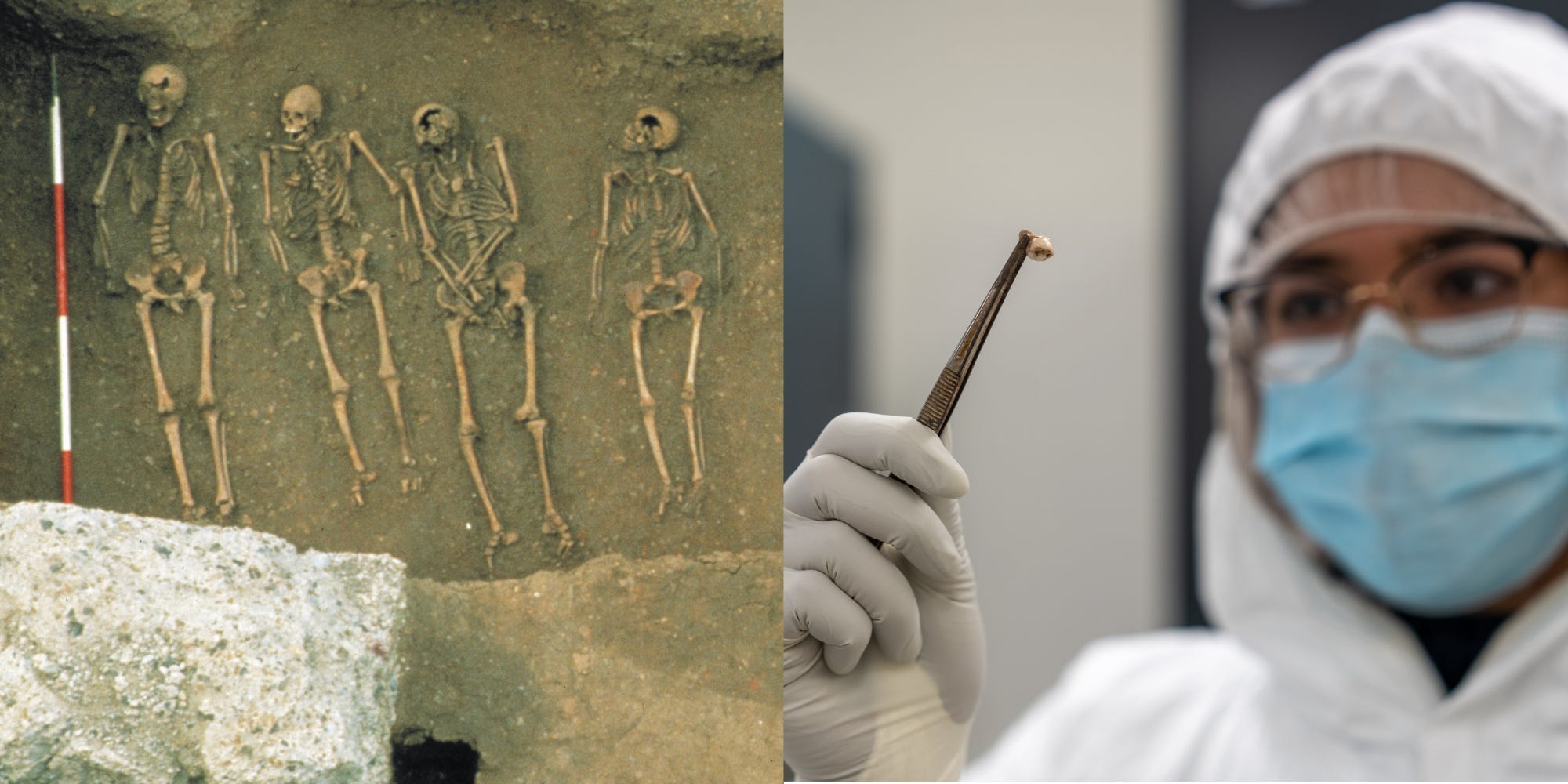 Scientists are studying the genetic makeup of human remains buried during a plague outbreak to see how that shaped genetics of human populations today.

In 2022 we lived through the aftermath of the COVID-19 pandemic, but new research has found that a prior pandemic continues to impact human health.

Insider’s Marianne Guenot reported that a pioneering study found that people who survived the Black Death plague, which ravaged Europe 670 years ago, are much more likely to carry a specific genetic mutation that increases one’s risk of increased risk of chronic and potentially debilitating conditions like Crohn’s disease and rheumatoid arthritis.

You can read all about the “price paid” for surviving the Black Death here.

Dead rats found on an ancient shipwreck provide clues to its voyages 1,400 years ago 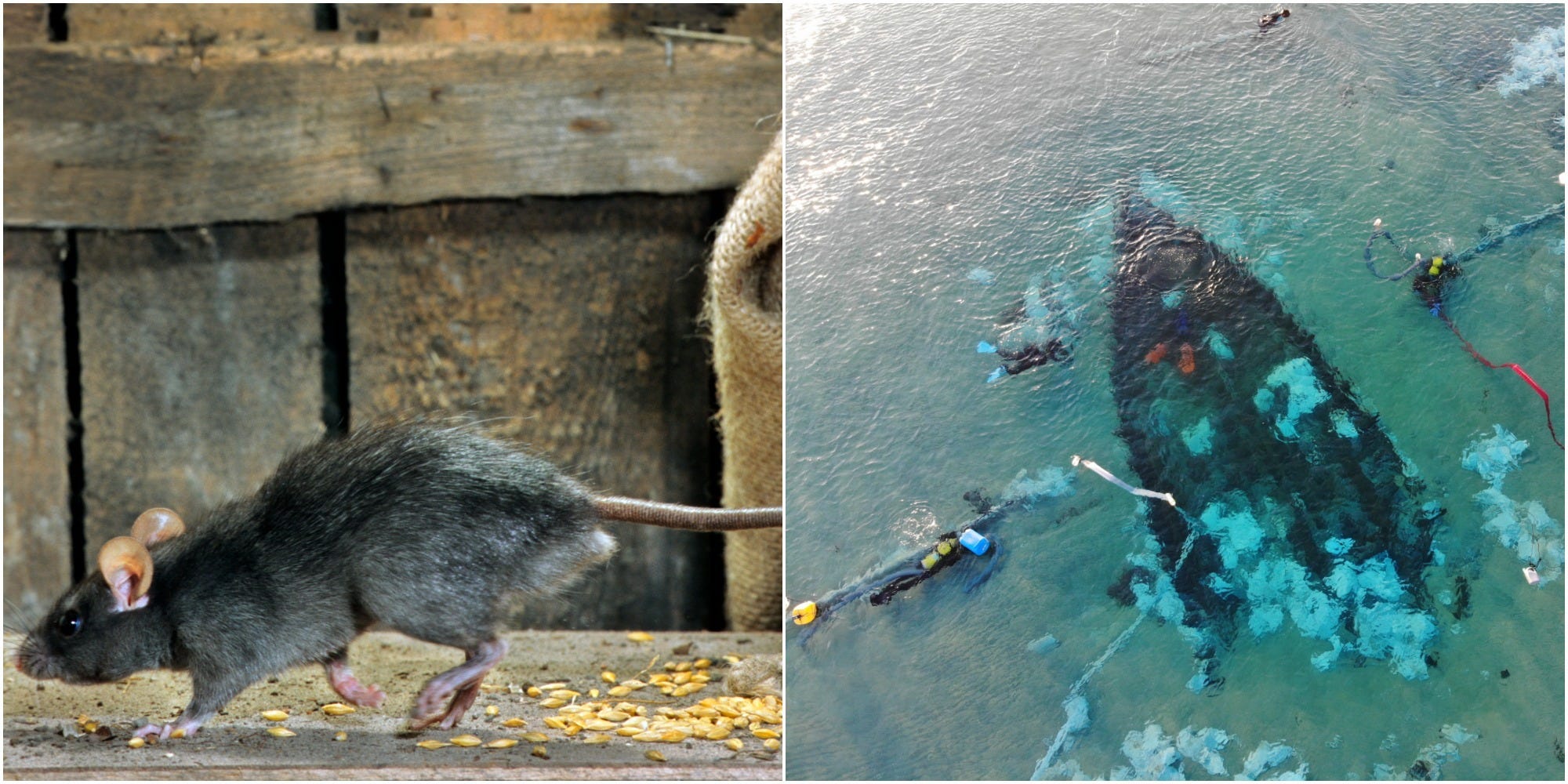 A black rat, also known as a ship rat, next to the Ma’gan Michael B ship.

Skeletons of dead rats on the ship labeled the Ma’gan Mikhael B, dated between 648 and 740 C.E., have helped the team learn more about the life of the vessel that once sailed the Mediterranean.

Speaking to Insider, Sierra Harding, a zooarchaeologist on the project, said the remains are the oldest and only direct evidence of a ship rat infestation on an ancient shipwreck in the Mediterranean.

Find more about what the rodents have told scientists about the ancient ship here. 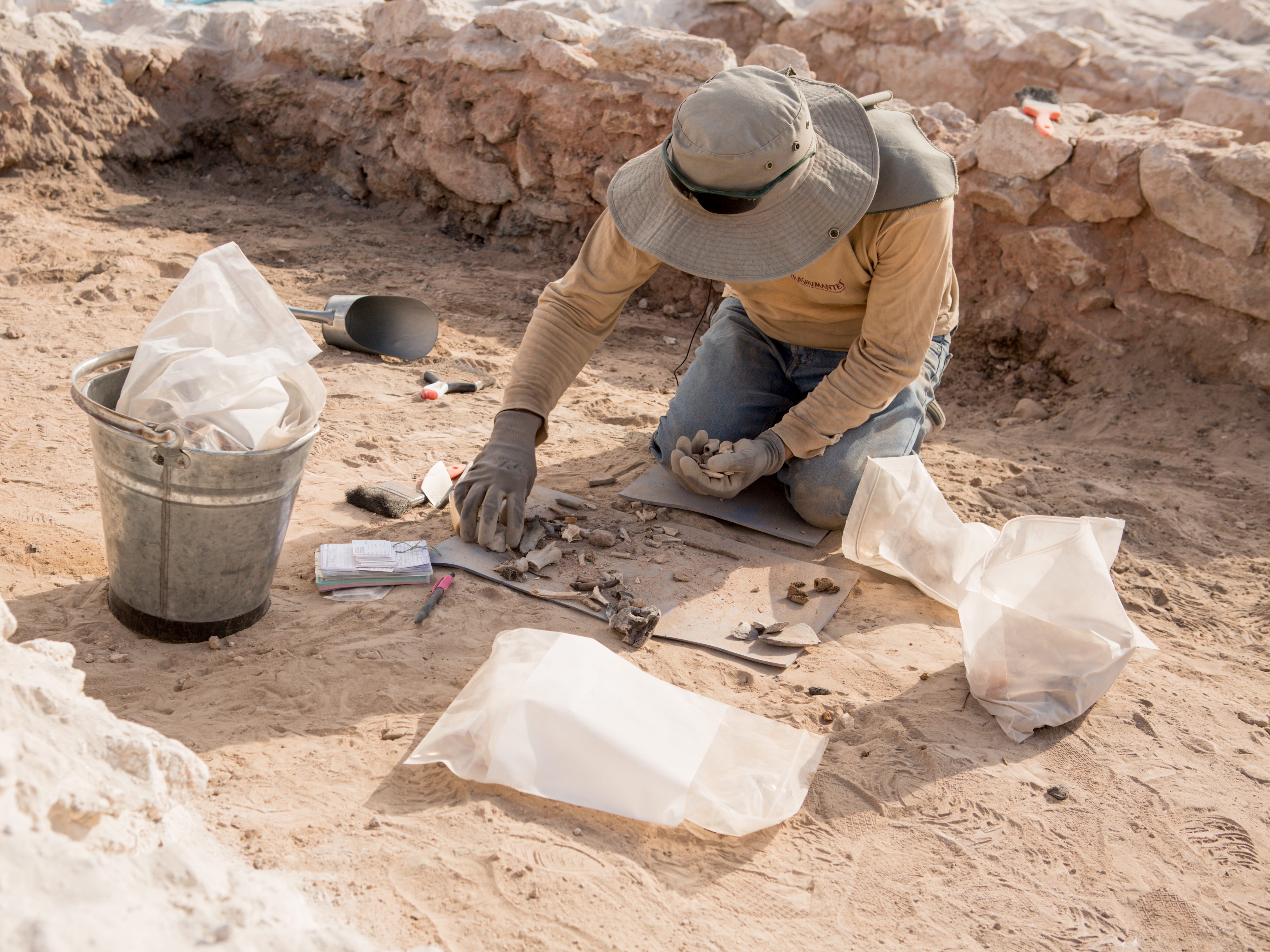 An archaeologist excavates for vilca seeds at the Quilcapampa site in Peru.

Insider’s Joshua Zitser reported that new archaeological research uncovered that beer laced with hallucinogenic drugs may have helped the rulers of an ancient, pre-Incan empire in South America maintain power for about 400 years.

The new research found that people would drink the potent mixture, a beer-like drink made from the drupes of molle trees and combined with psychotropic seeds, which was likely a staple of intimate feasts that helped foster social relationships and reinforced elite positions in the Wari empire.

You can find out more about the head-spinning beverage in the full article here. 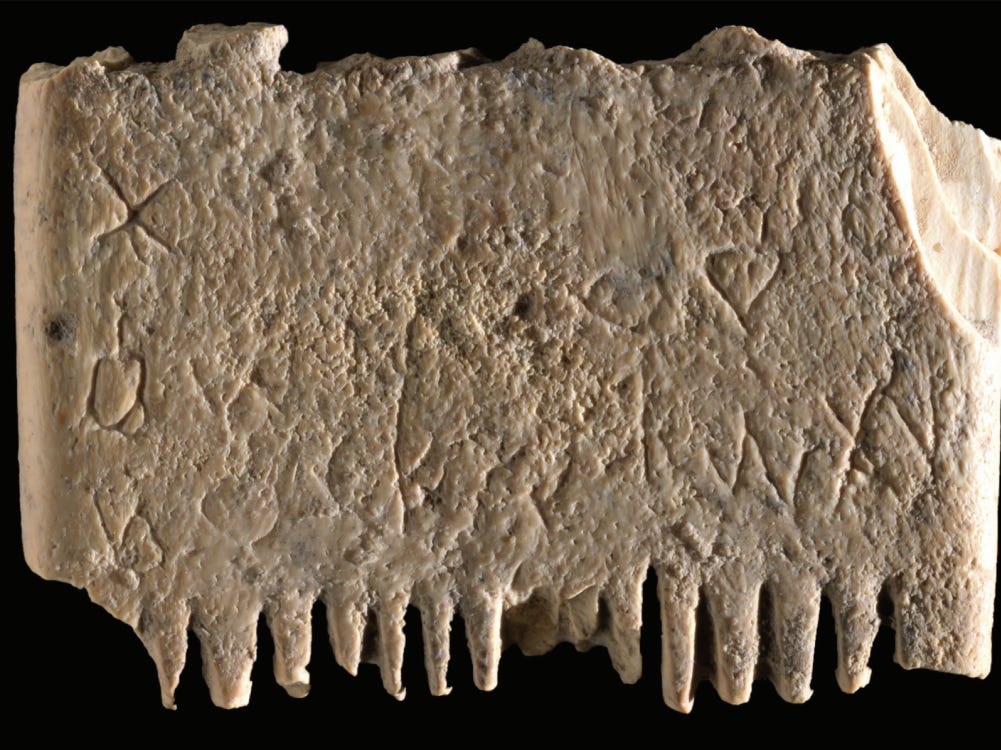 An ancient lice comb, believed to be from around 1700 BCE, has on it the oldest known sentence written in the first alphabet.

The oldest known sentence is in the first alphabet. Its location was a little surprising.

Insider’s Alia Shoaib reported that it was inscribed on the world’s oldest lice comb, found in Israel.

The inscription in an early Canaanite script, made up of 17 letters, reads: “May this tusk root out the lice of the hair and the beard.”

You can read the full story here. 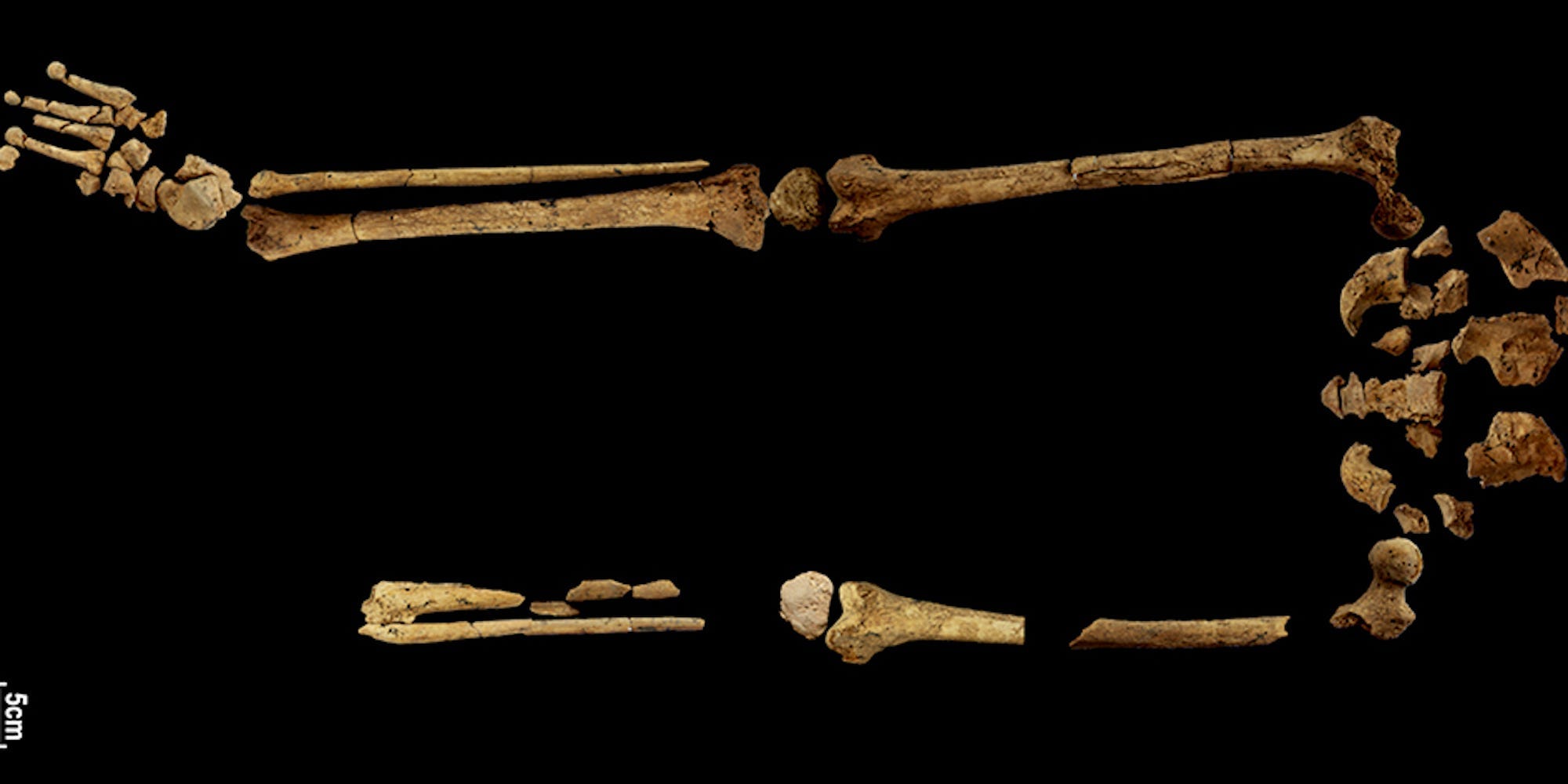 A skeleton who has gone through the world’s earliest limb amputation.

A 31,000-year-old leg amputation in Borneo was revealed when archaeologists found the skeletal remains of a young person in East Kalimantan, Indonesia. It was missing the tibia and fibula, the bones between the knee and ankle.

You can read the full story here and find out just how long the young person could live after they had their leg amputated.

Ancient poop contains new clues about feasts eaten at the construction of Stonehenge more than 4,500 years ago 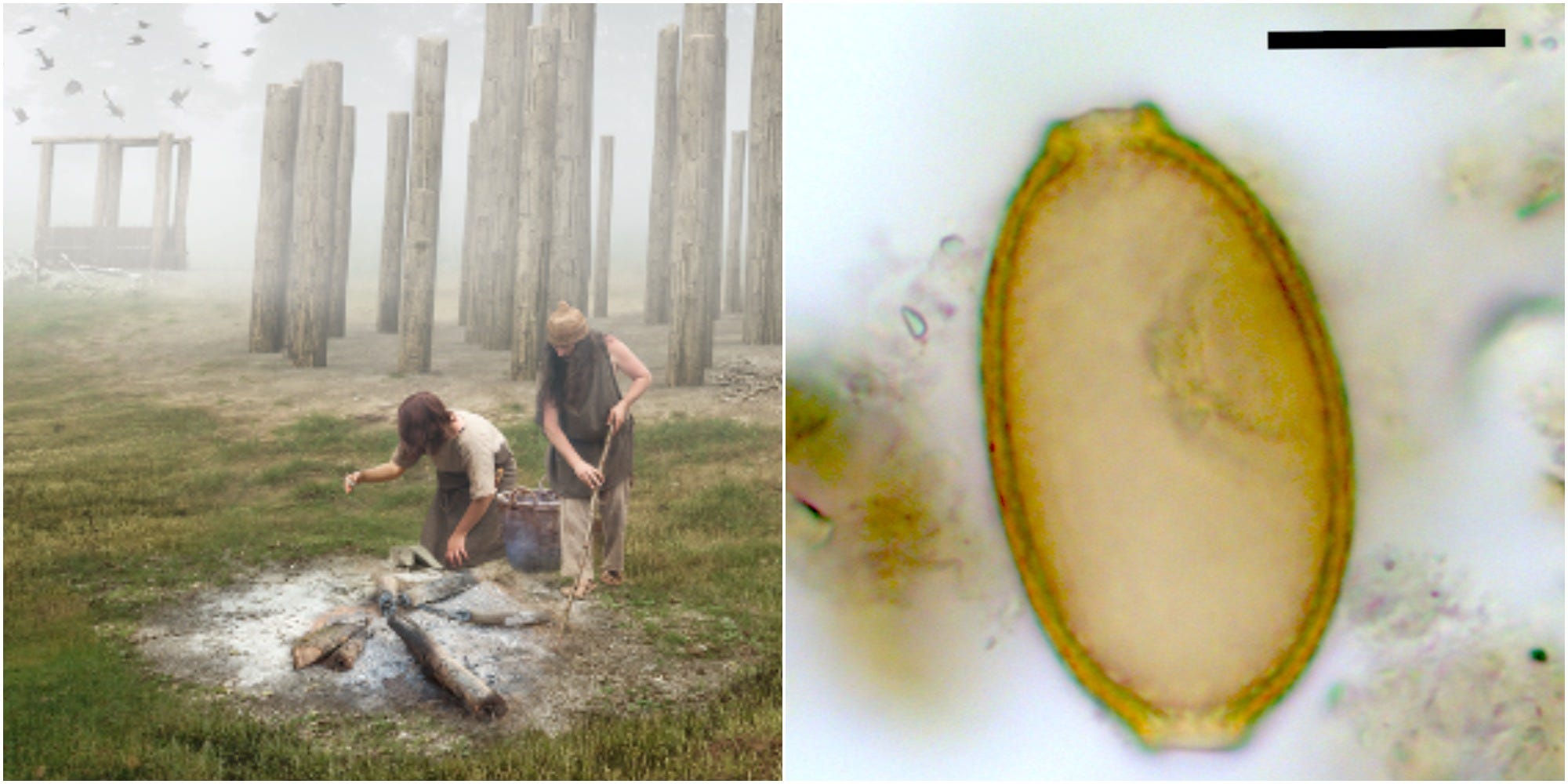 Parasite eggs were found in the feces of workers that built Stonehenge.

You can find out what the study author told Insider by reading the full story here.

Home » Audio Sources - Full Text Articles » 12 amazing archaeological discoveries of 2022: From the world’s oldest limb amputation to the fighting sausage dogs of the Roman Colosseum
a