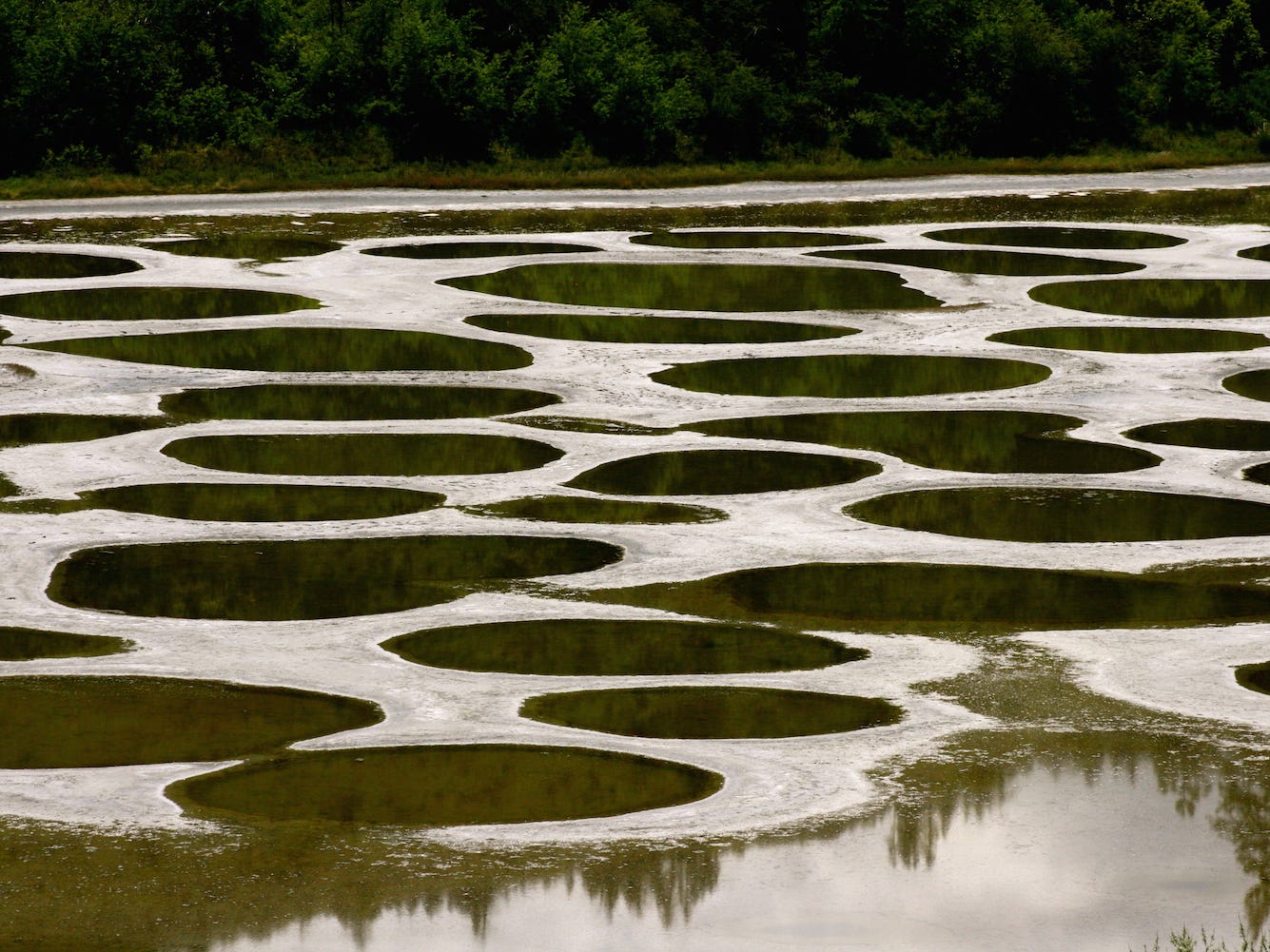 An unusual lake in Canada. 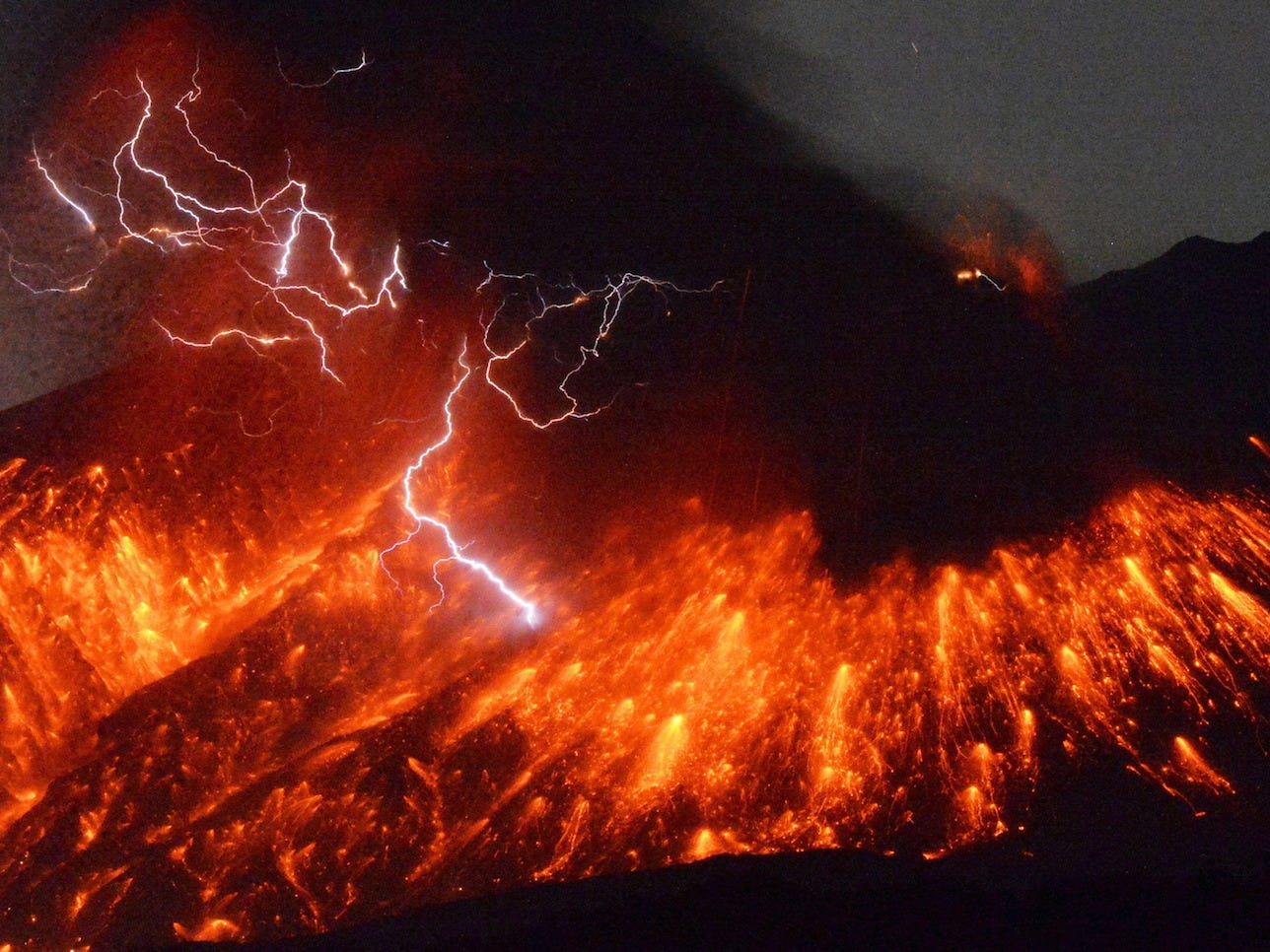 It’s pretty hard to study, but researchers have a few ideas about what causes it. One of the most common is that during an eruption, ash picks up so much friction that the build-up of static electricity causes lightning.

Check out volcanic lightning in action below: 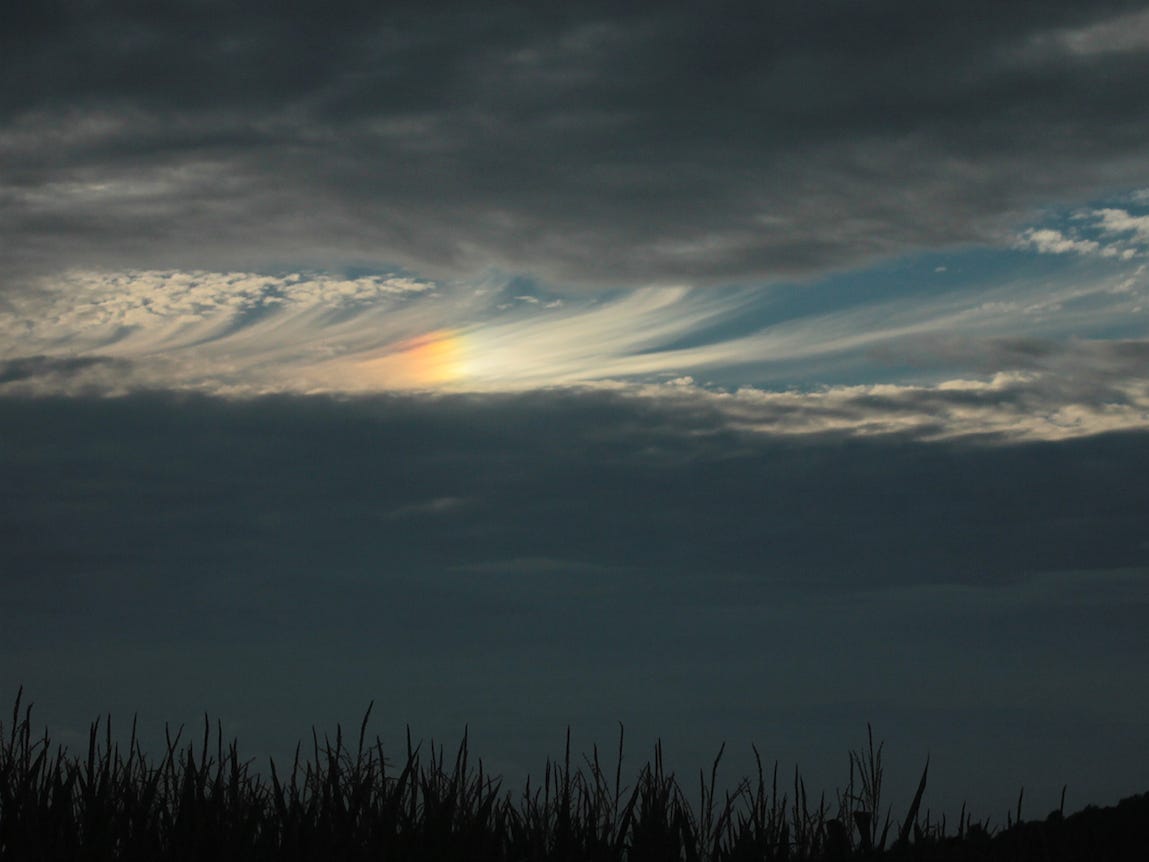 A fire rainbow in Pennsylvania.

These beautiful sky paintings have nothing to do with fire or rain, as weather-loving people are very quick to point out.

They’re actually caused by the sun, very high in the sky, shining through a particular type of ice cloud formation. That means that how rare they are varies with how far north or south you are. 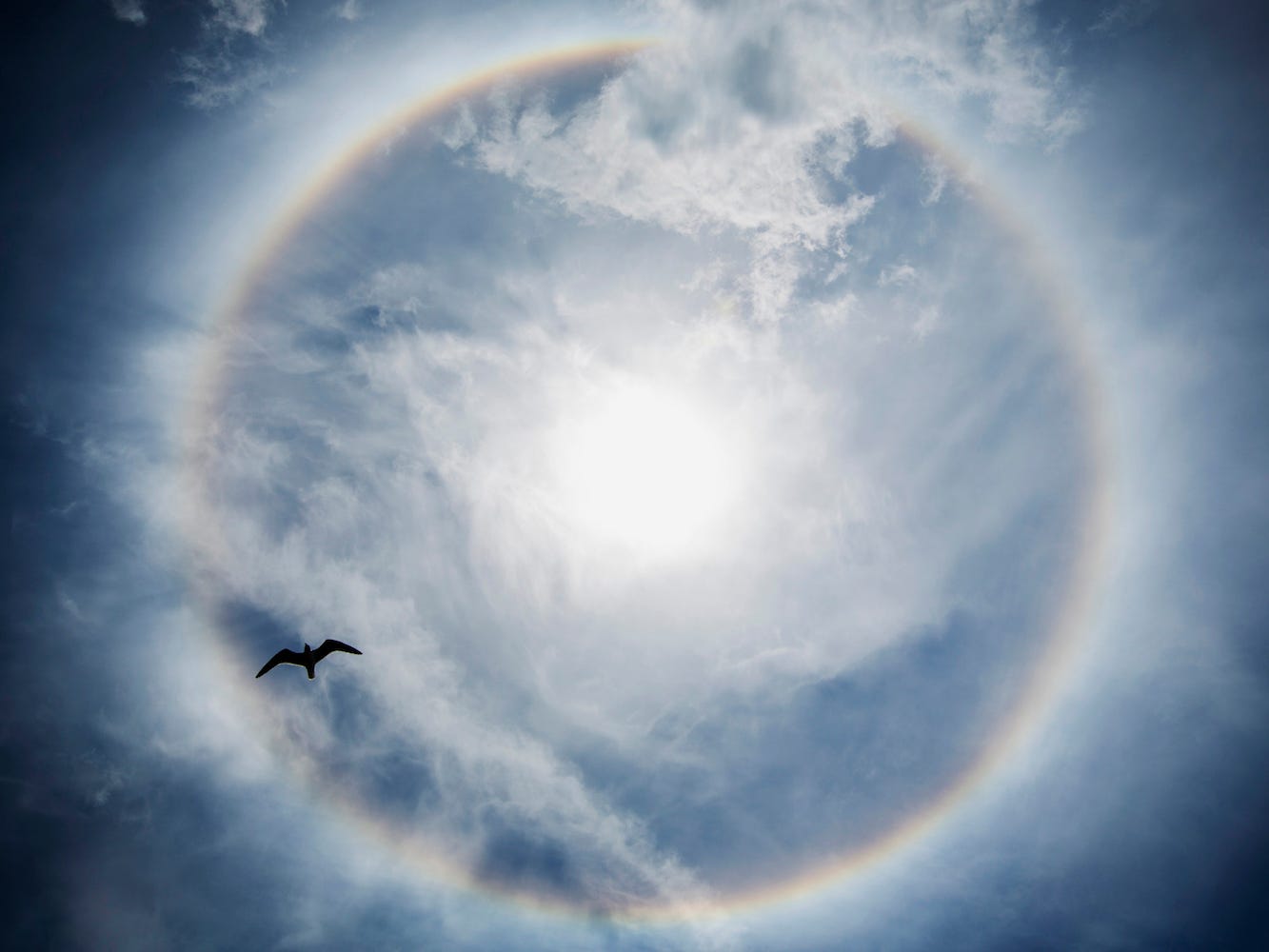 Like fire rainbows, halos require just the right formation of ice crystals in clouds high above the surface of the Earth to bend light from the sun into a perfect ring.

The same phenomenon can also happen with moonlight, although moon halos are usually white and sun halos can be rainbow-colored, like this one. 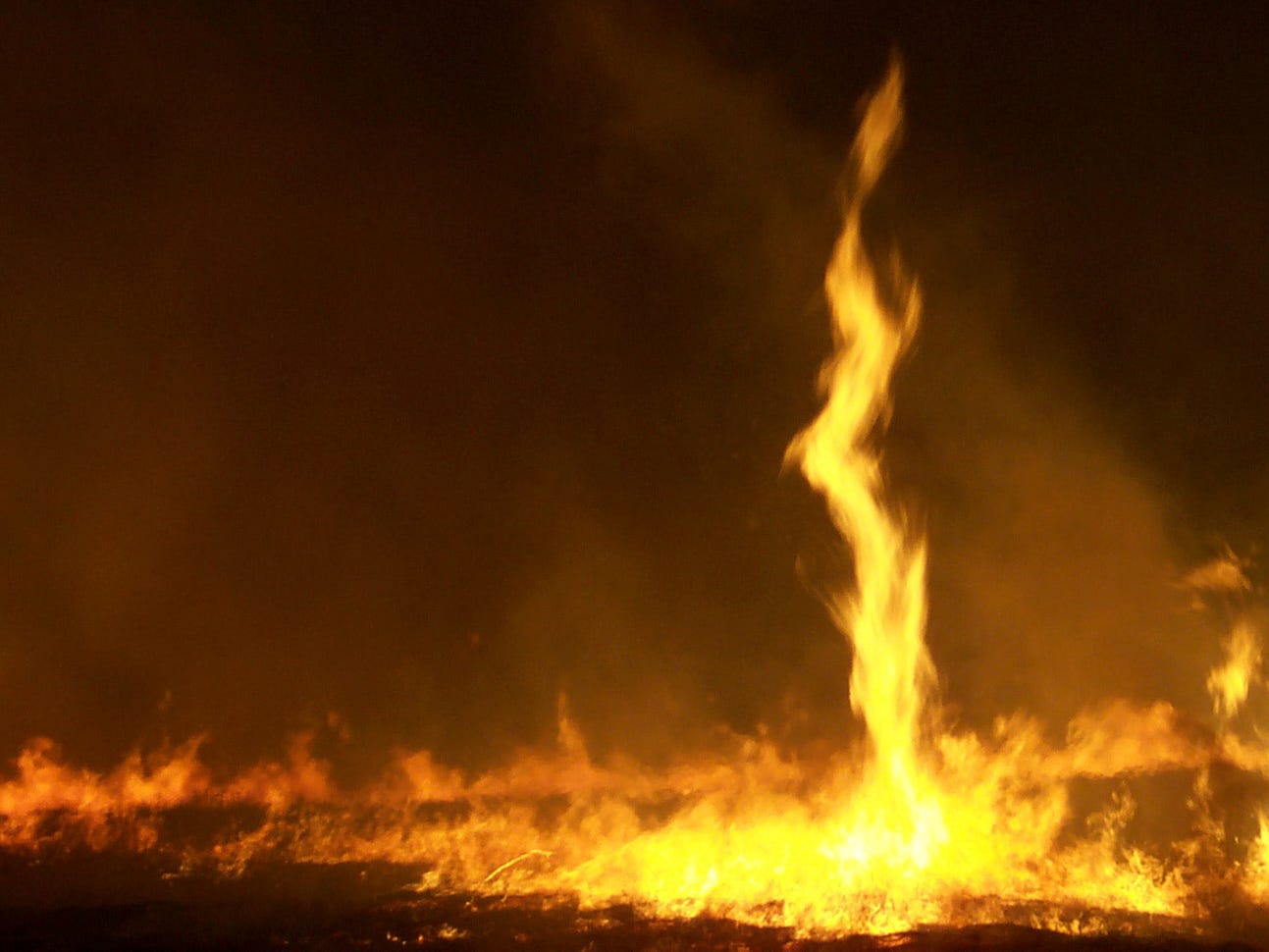 US Fish and Wildlife Service/Wikimedia Commons

It’s pretty clear how this phenomenon got its nickname: It looks like a tornado, but it’s made of fire. They form when wind patterns twist an active fire into a column.

Fire tornadoes are rare, but they’ve been reported to grow as wide as 1,000 feet. Fire whirls can spread fires not only directly, but also by scattering burning debris. 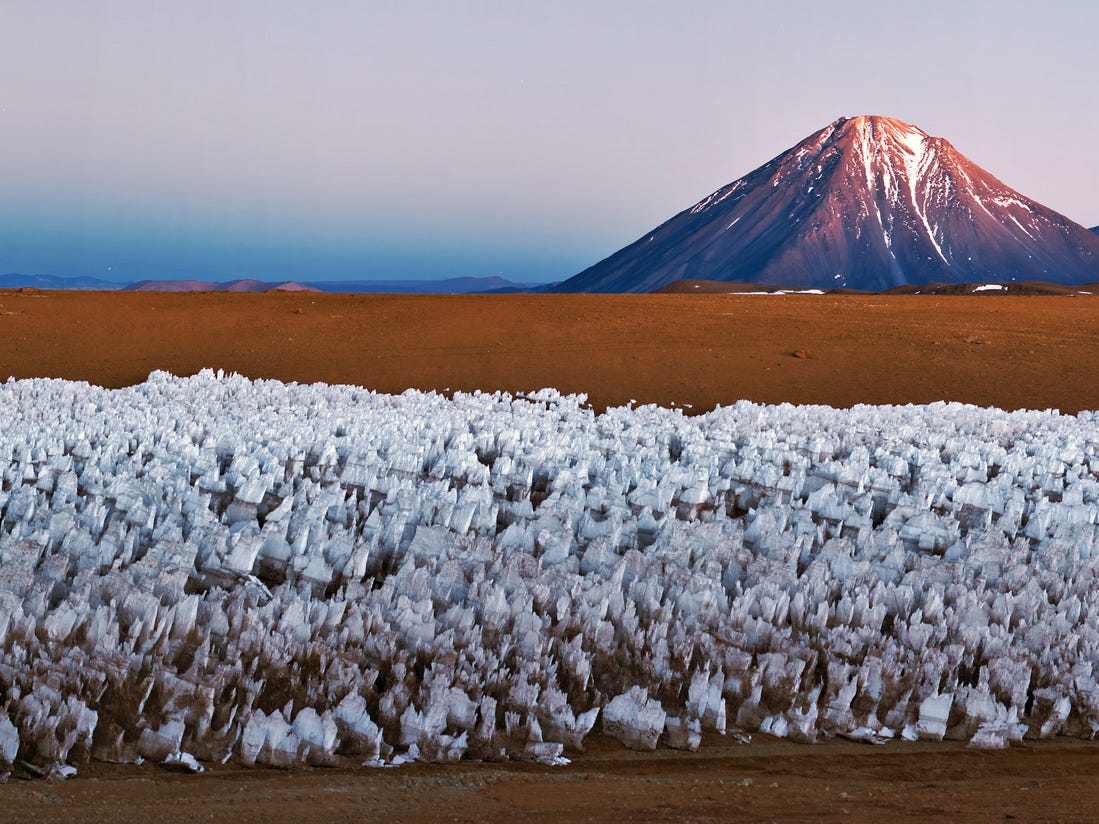 Penitentes in front of the Atacama Large Millimeter/submillimeter Array telescope and the Licancabur volcano in northern Chile.

These ice spikes, called penitentes, form in high altitudes, where sunlight turns ice directly into water vapor, rather than melting it to water.

Sun beams vaporize small dimples in the snow’s surface. Then, the uneven surface directs sun into the dips and away from the peaks, exacerbating the trend.

Penitentes can grow as tall as 15 feet.

Watch them grow and die: Wind can catch individual droplets of lava from a volcanic eruption and stretch them into what’s basically long, thin glass wires. These strands  — which are called Pele’s hair — can reach as long as 6 feet.

While in Hawaii the phenomenon is named for Pele, the goddess of volcanoes, it’s also found in Norway, where it’s known as Witch’s Hair. 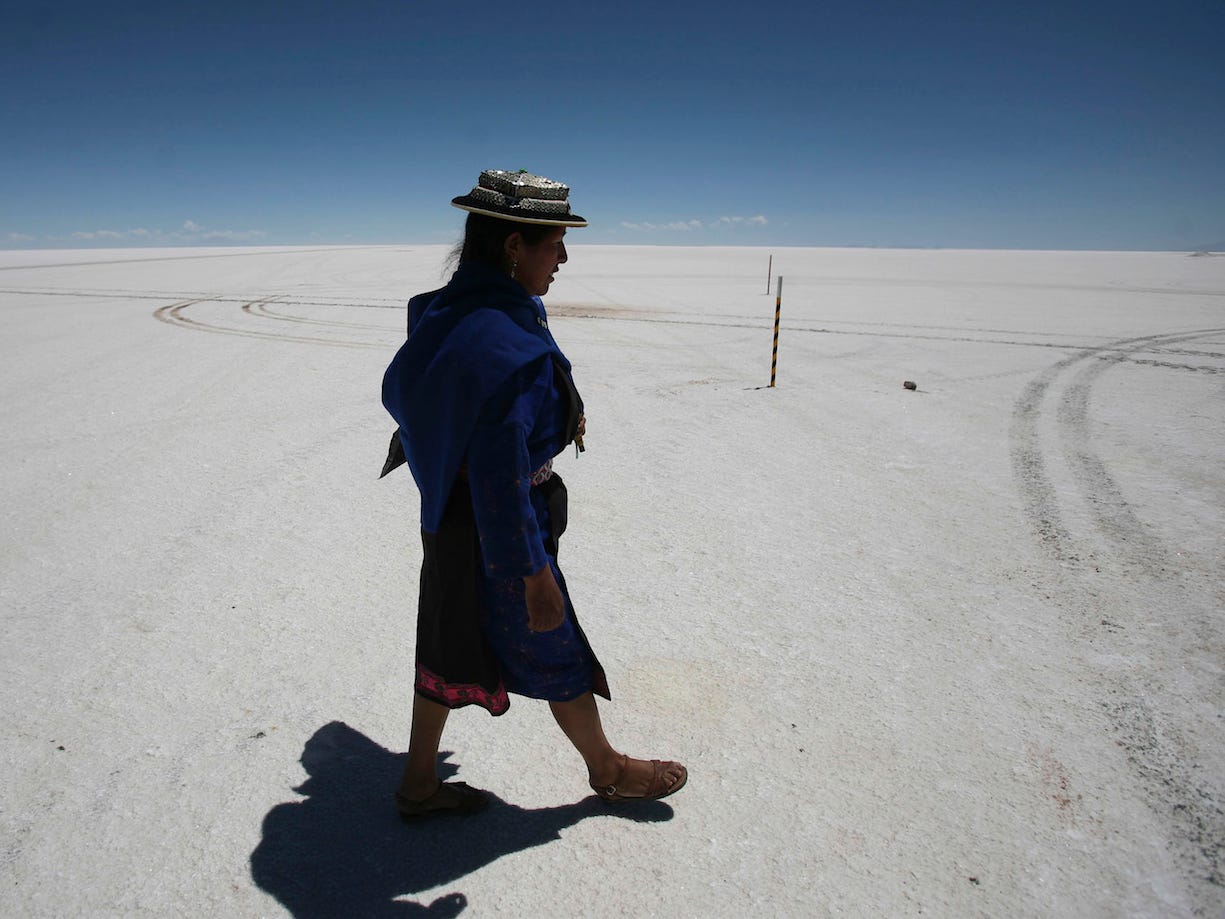 Salar de Uyuni in Bolivia is both the world’s largest salt flat (it’s about 4,000 square miles) and the home of half the planet’s lithium, a key component in most electronics’ batteries.

The wet season turns the salt flat into a perfectly reflective lake. 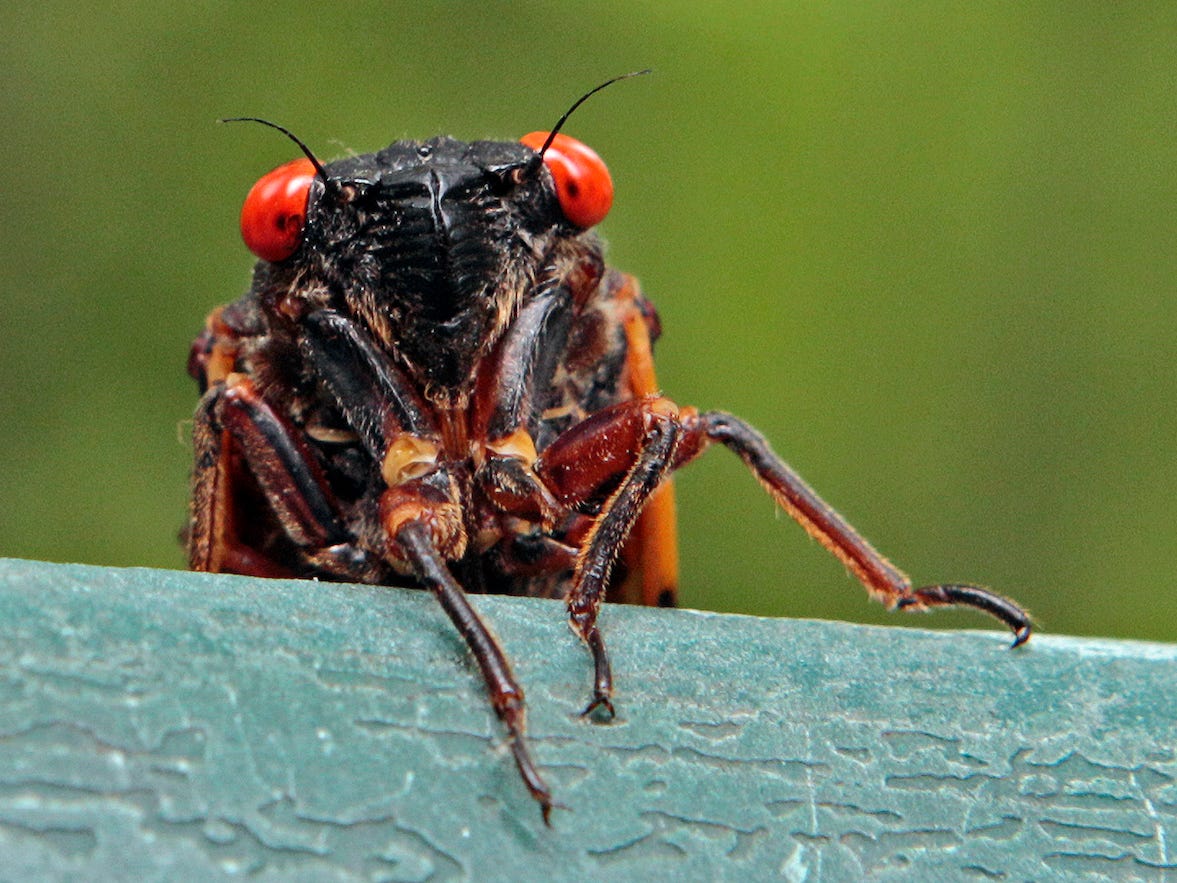 Periodical cicadas are insects that emerge as broods every 13 or 17 years. They spend most of their life underground, sucking the juice out of plant roots — in fact, they’re North America’s longest-living insect.

Once a brood emerges, they’re singing to mates, mating, laying eggs, and dying, all over the course of a few short weeks. 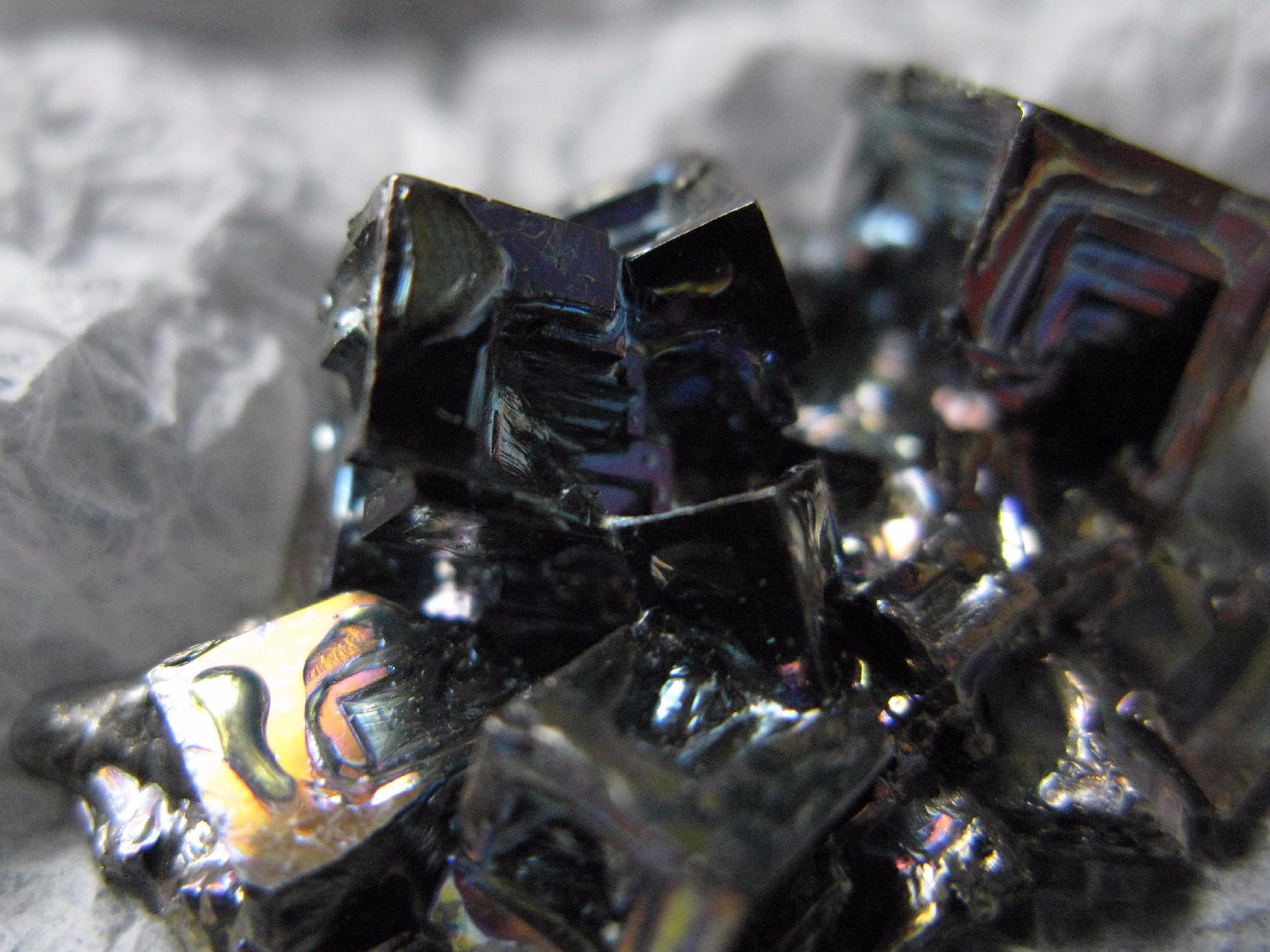 Bismuth is a dense, super-shiny grey metal that’s found in predictable places like safety valves and paintings, but also Pepto-Bismol.

If you melt it, then cool it very slowly, bismuth forms iridescent cubic crystals — even on your own stove. 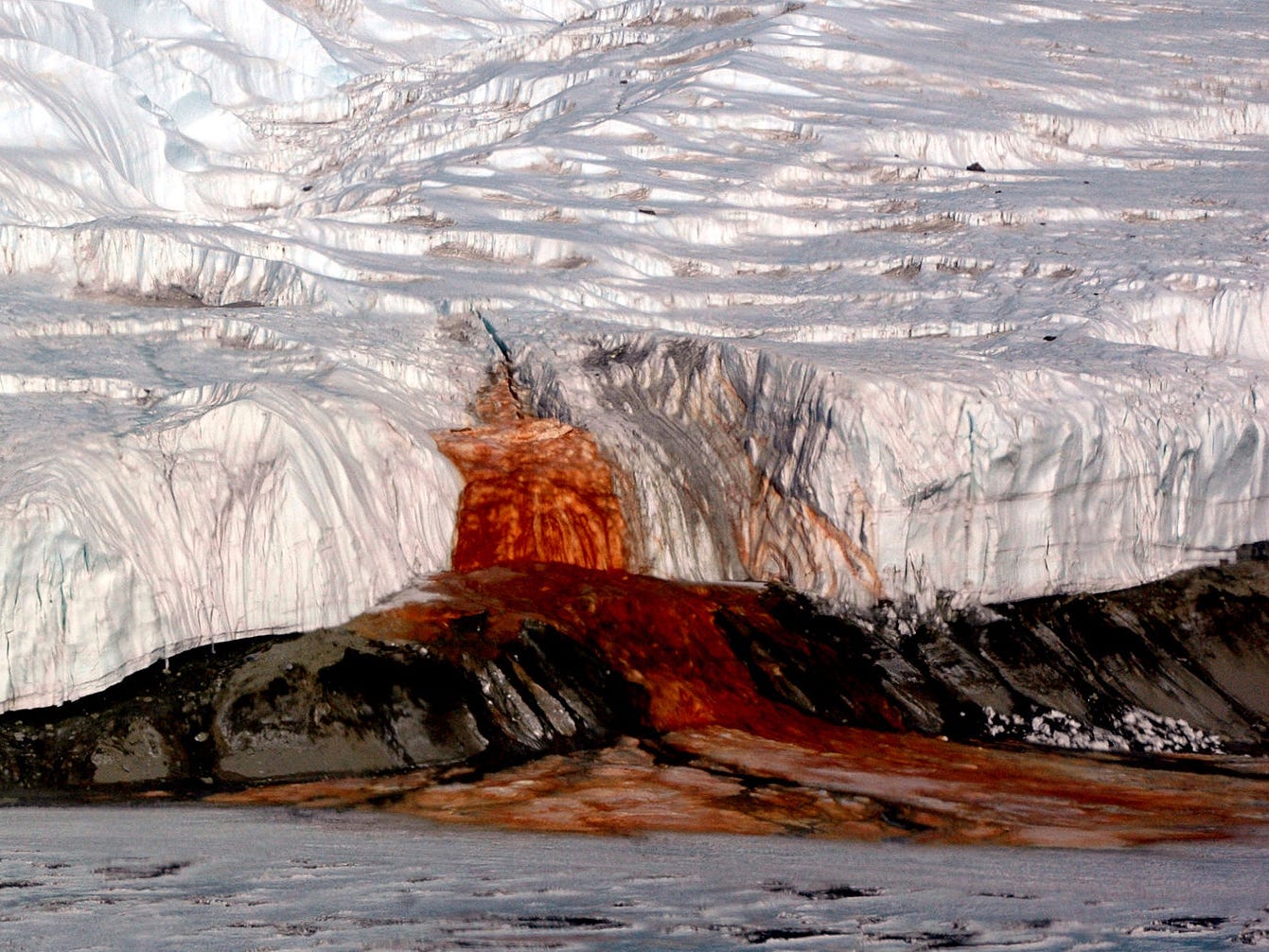 Blood Falls, in one of the driest regions of Antarctica, is fed by an underground lake. It’s full of bacteria scientists want to study because they fuel themselves with sulfates, instead of sugars like we do.

The water has so much iron in it that it literally rusts when it meets air, giving the waterfall its trademark color. 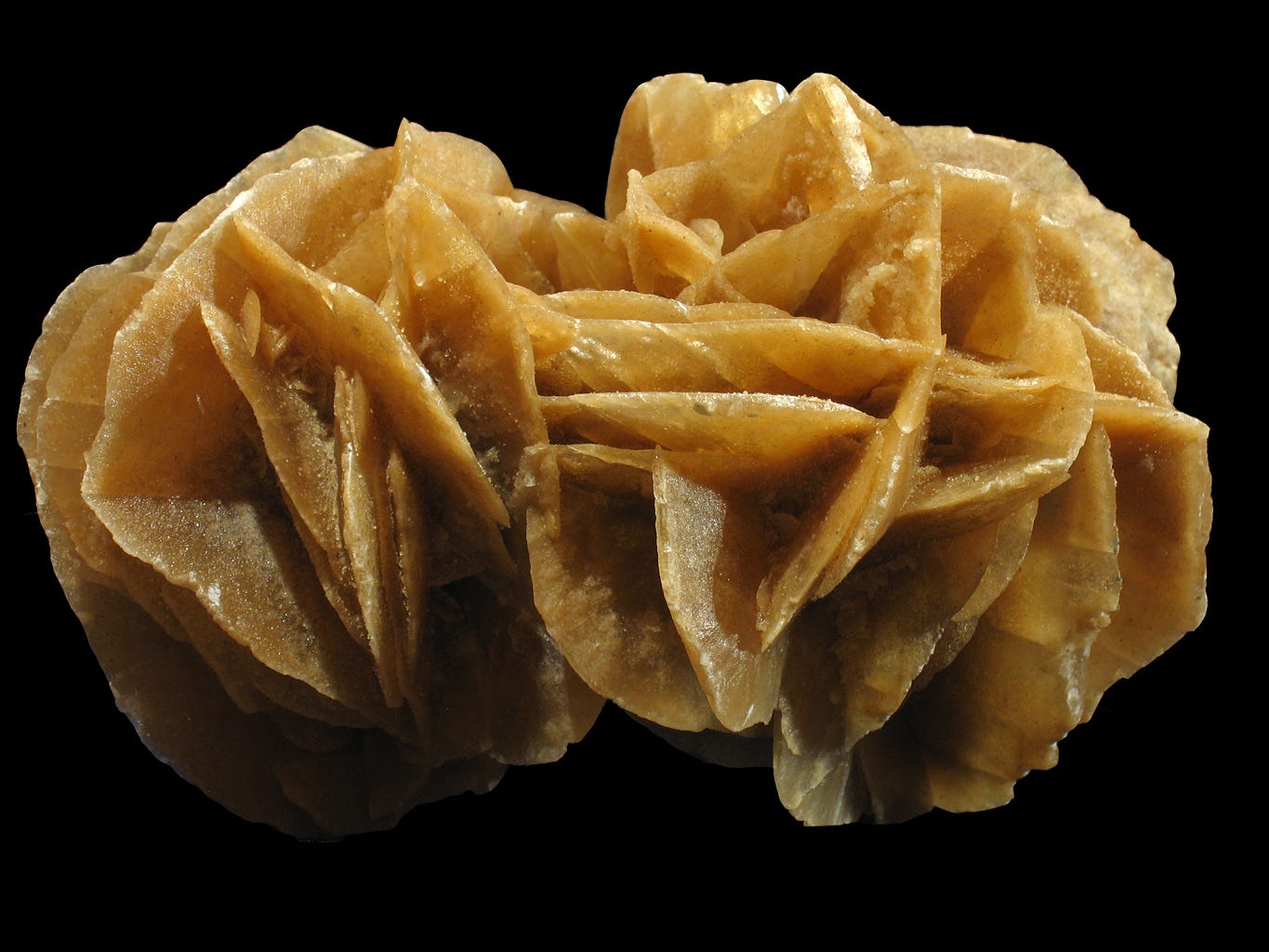 A desert rose, which is a special form of the mineral gypsum.

Sting wasn’t making it up: There really is such a thing as a desert rose.

It’s a rose-like formation of the mineral gypsum that can develop in dry, sandy places that occasionally flood. The switching between wet and dry lets gypsum crystals form between grains of sand, trapping them. 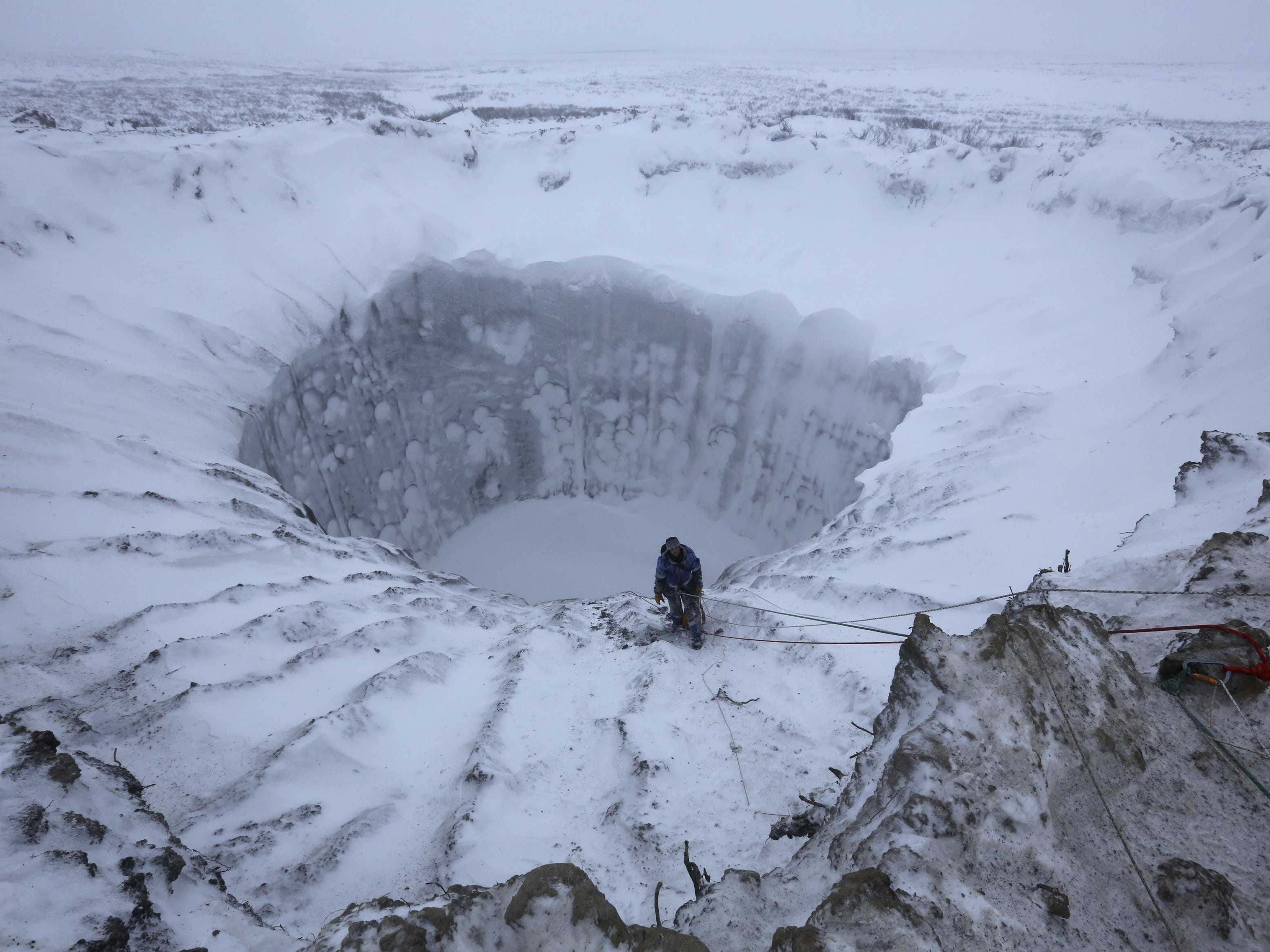 A giant hole in the Siberian permafrost.

As the climate is changing, new phenomena are developing — none quite so explosively as this one.

It turns out that if you heat frozen methane trapped in the Siberian permafrost enough, it turns into a gas, eventually building up so much pressure that the ground explodes. The loud boom and giant hole these bursts create were first reported in 2013. 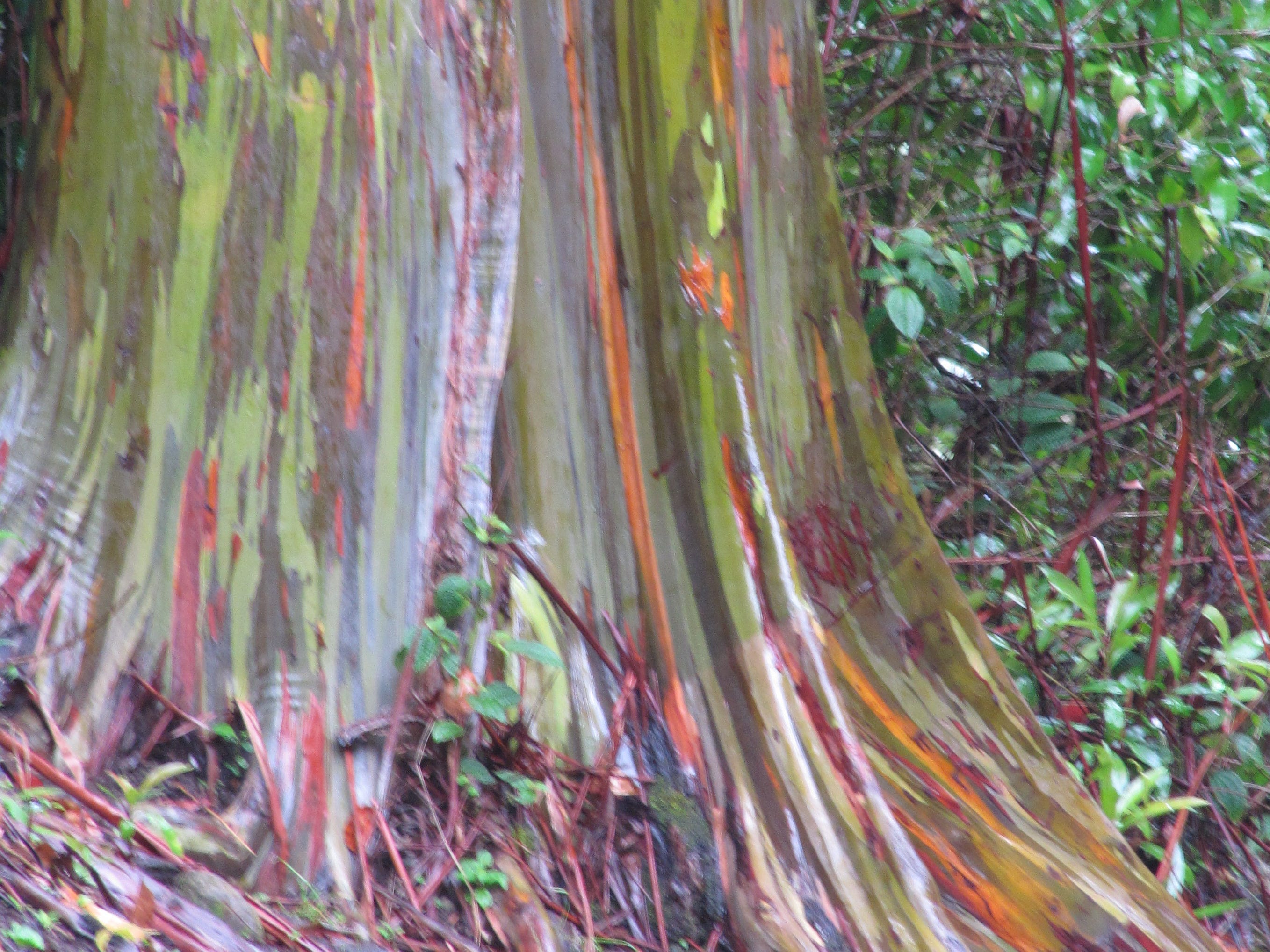 Rainbow eucalyptus, which hails from the Philippines and Indonesia.

Hailing from the Philippines and Indonesia, the rainbow eucalyptus, also known as the rainbow gum, is probably the most colorful tree on Earth. Its striped look is caused by bark turning colors and peeling away as it ages.

The youngest bark is bright green because it contains chlorophyll (usually found in leaves), then turns first purple then red then brown as it gets older, loses chlorophyll, and picks up tannins (also found in wine).

In an ironic twist, huge amounts of rainbow eucalyptus wood pulp is turned into white paper every year. 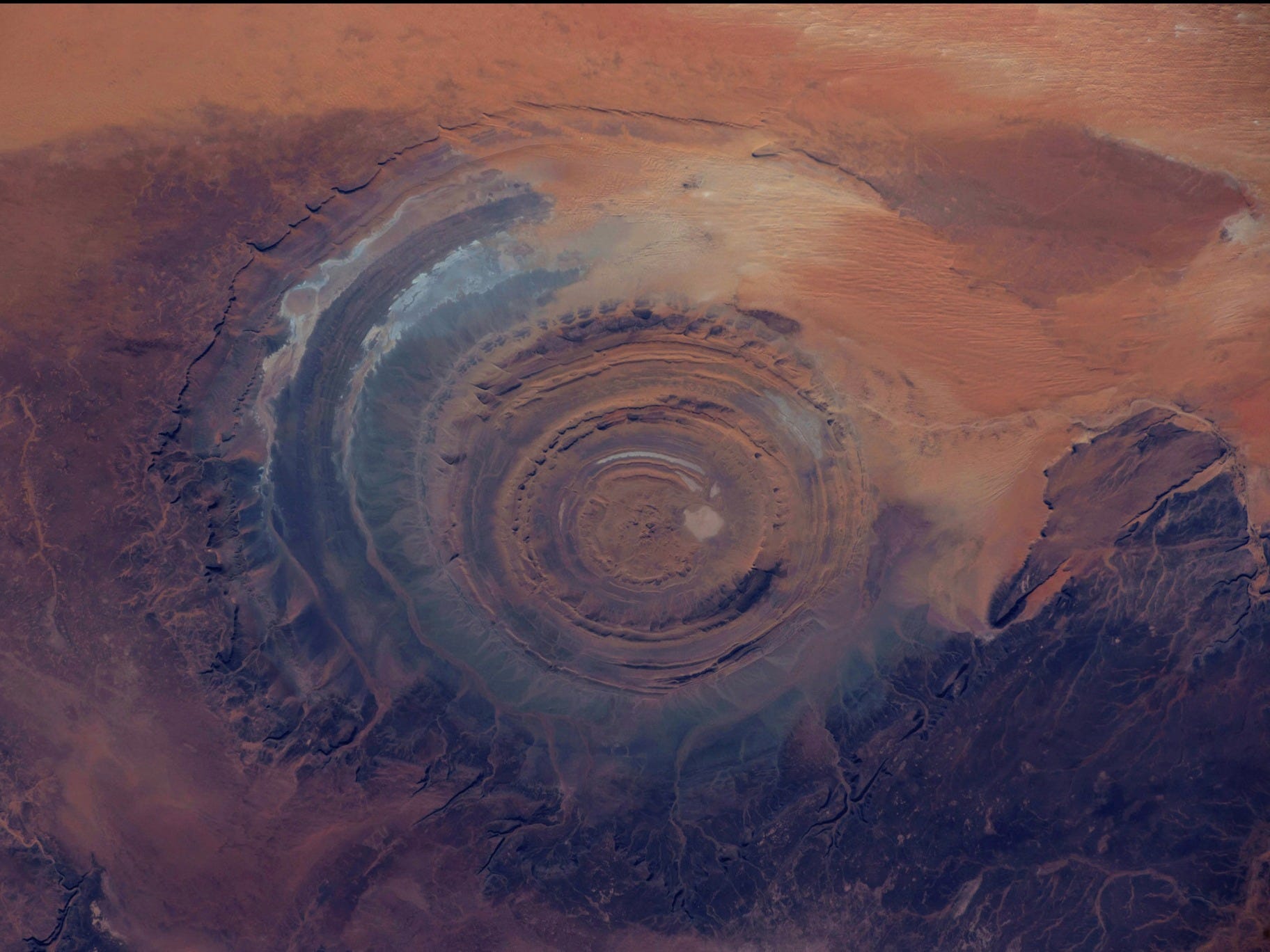 Richtat structure, also known as “the Eye of the Sahara.”

Formally known as the “Richtat structure,” the Eye of the Sahara is in Mauritania. Scientists are still trying to confirm how it was formed, but they think it’s the eroded remains of a giant dome of rock. If so, it would have originally formed when magma pushing up toward the surface of the Earth created a bulge, like a pimple.

Each band of the ring is made of a different type of rock that erodes at a different speed. It’s also the “almost home” signal for astronauts landing in Florida. In fact, astronauts are mostly responsible for teaching us there’s something there in the first place, since the formation is difficult to recognize when you walk over it. 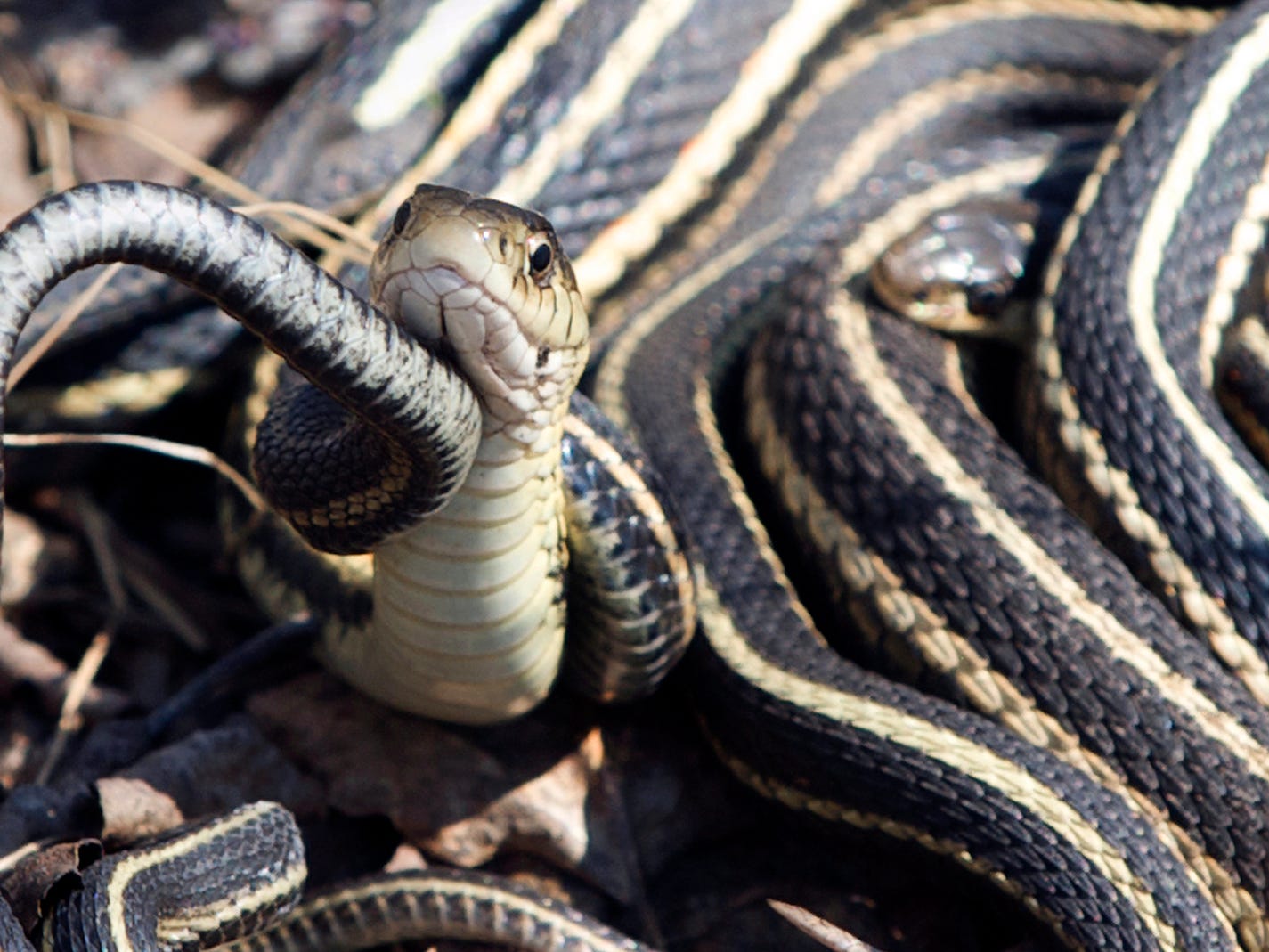 Maybe you don’t really like snakes, but how do you feel about tens of thousands of harmless snakes waiting out the winter in underground limestone dens? That’s a real thing in Manitoba, Canada, home to the highest concentration of snakes in the world, according to National Geographic.

In May, they slither out of their nests to mate, with dozens of smaller male snakes lurking, waiting to ambush larger females.

“Imagine trying to find a slightly bigger piece of spaghetti in a colander of spaghetti, and it’s moving,” Bob Mason, a scientist at Oregon State University, told The New York Times in 2016.

Watch the snakes in action here: 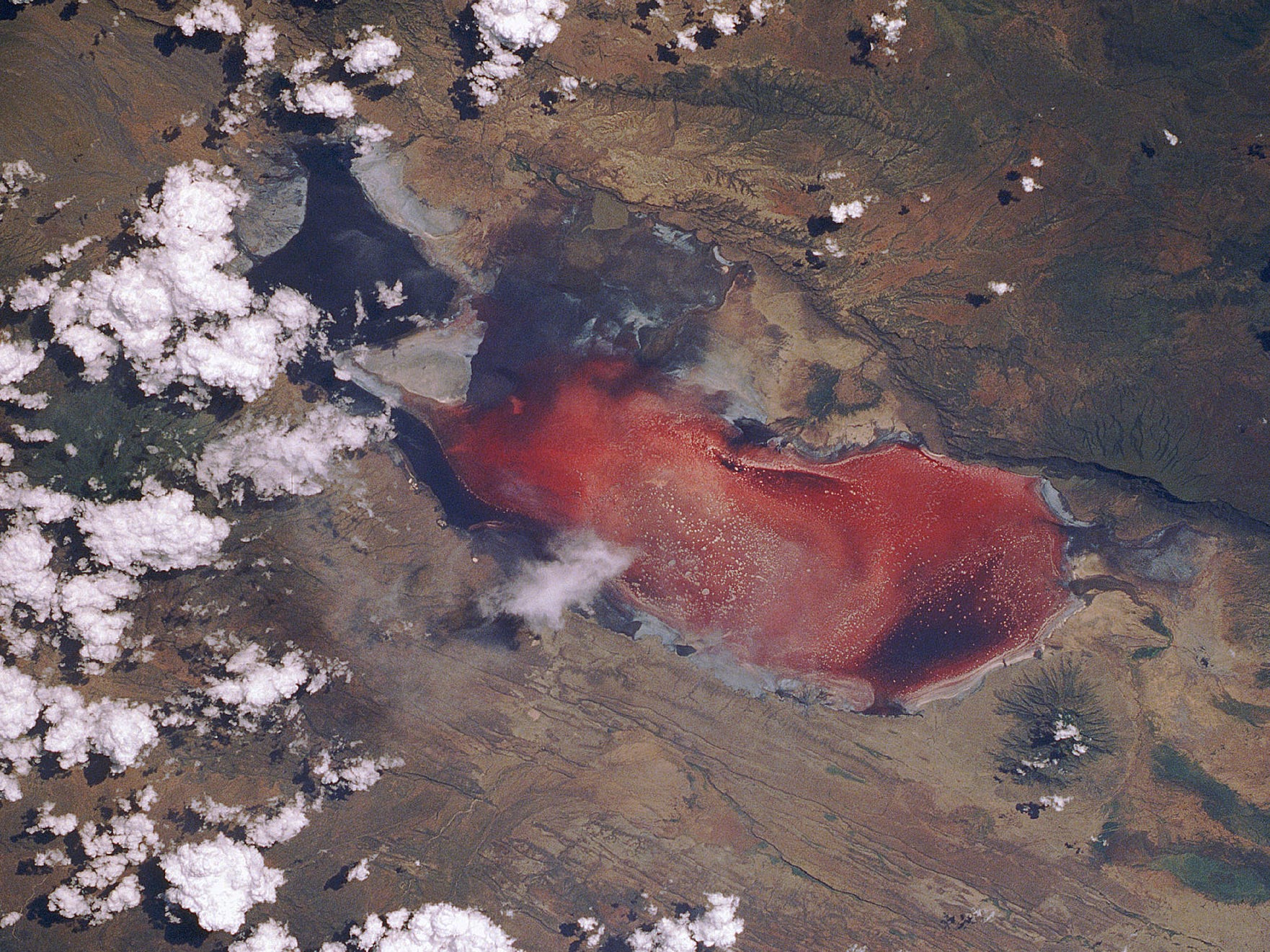 Lake Natron, in Tanzania, can hit 140 degrees Fahrenheit and, thanks to a nearby volcano, alkalinity at the level of pure ammonia.

That means it’s almost deserted, except for a particularly hardy fish, the microbes that make it look red, and lesser flamingos. (The birds actually use the lake as their only breeding ground — not just because they’re color coordinated, but because there aren’t very many predators around to eat the chicks.)

But animals that do die in the lake end up so coated in baking soda and similar chemicals that they look like they’ve been turned to stone. 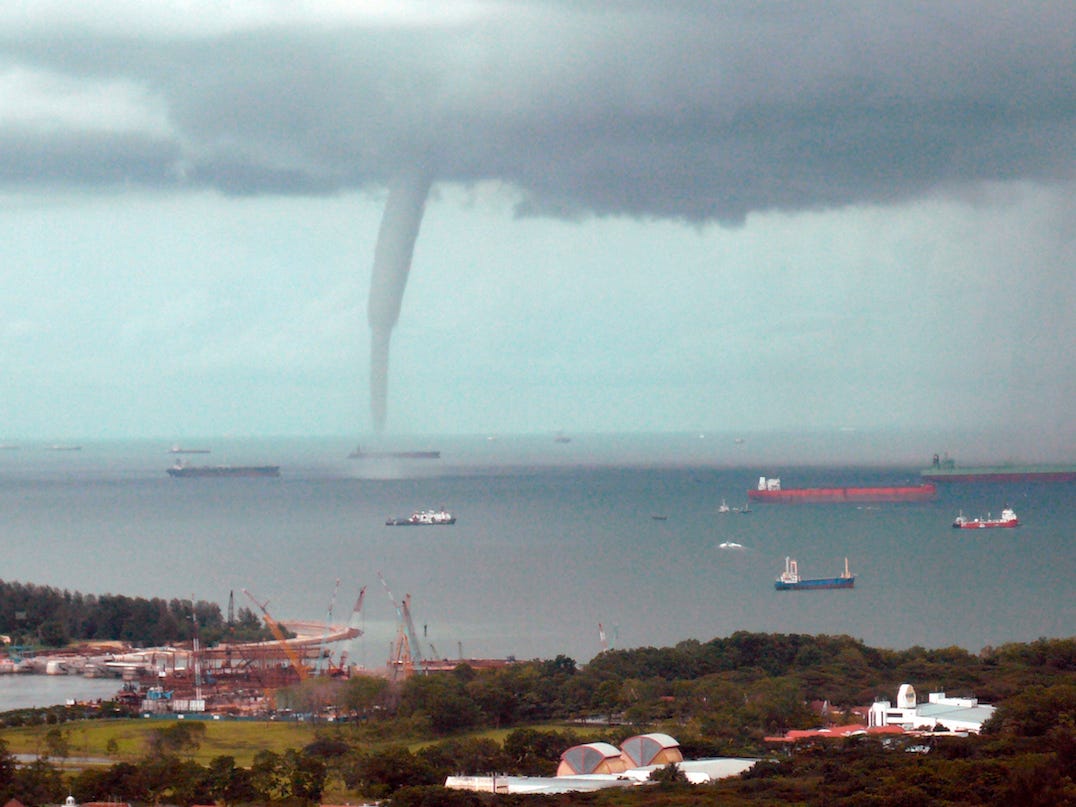 A waterspout near Singapore.

Waterspouts look like liquid tornadoes, but while they can form during storms, they can also develop on calm, open ocean — swirling towers of wind climbing up from the water to the sky.

They are most common in the Florida Keys, although they’ve also been spotted on the Great Lakes. 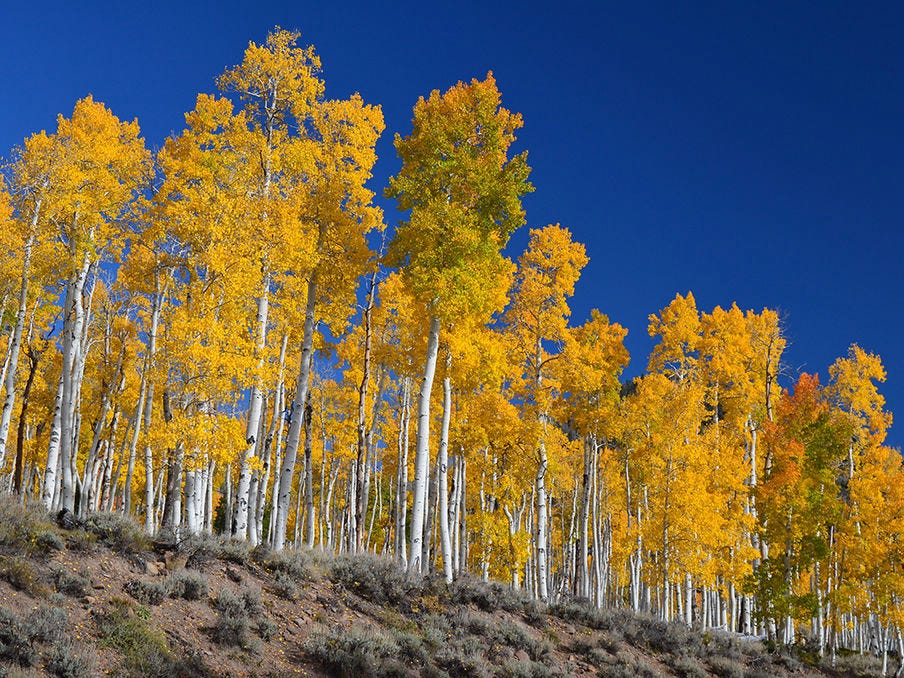 Pando, one of the oldest and largest organisms in the world.

That looks like a forest, right? All those trees you could walk between? Wrong. It’s all one tree.

Underneath the soil, a dense network of roots connects all the shoots that look like 47,000 trees from above.

Called the quaking aspen for its fluttery leaves, it usually grows into groves of identical clones, although it can reproduce sexually on special occasions.

This grove, nicknamed Pando, is one of the oldest and largest organisms in the world, although the original stem is long dead by now. 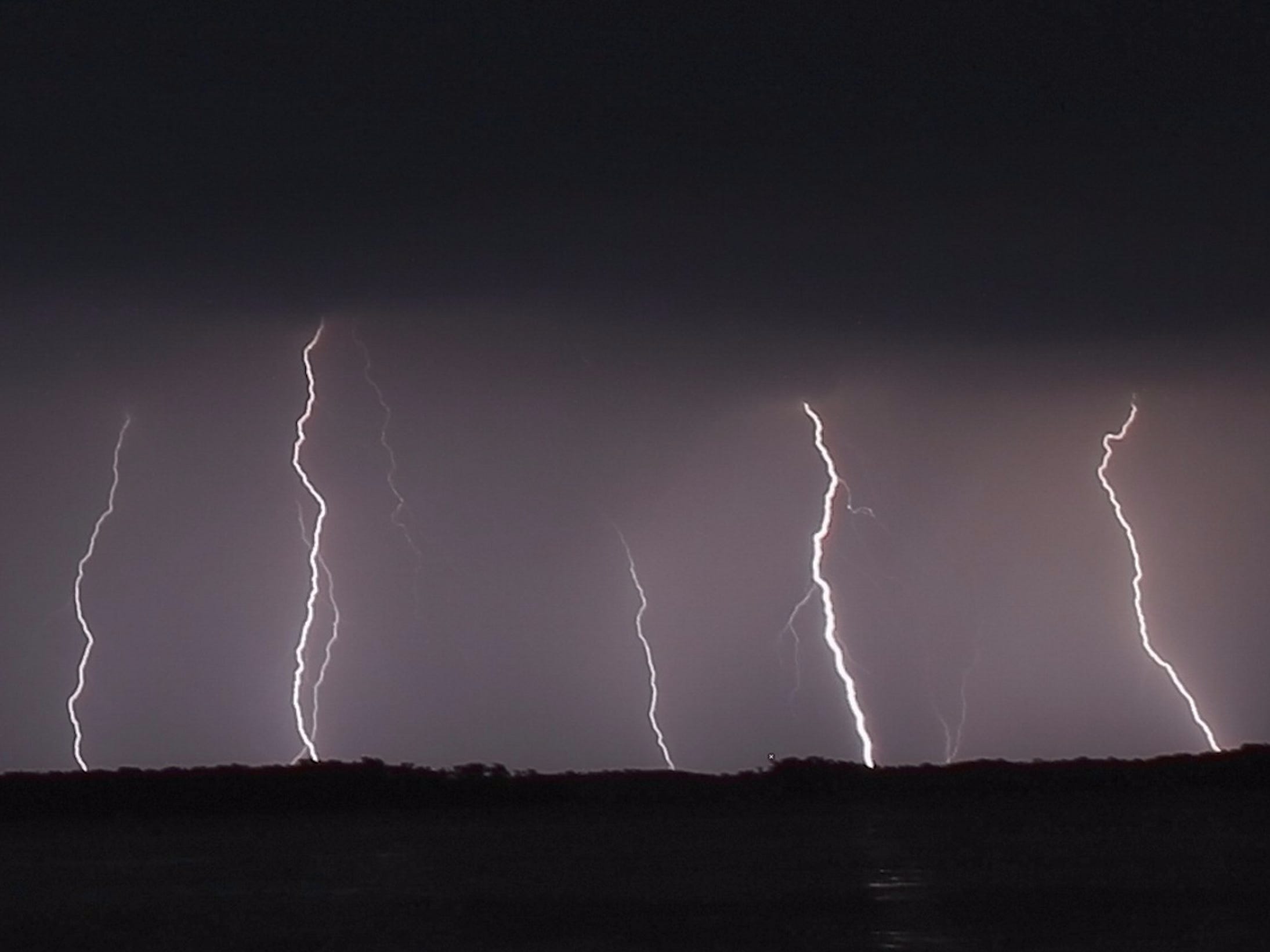 Lightning occurs over and around Lake Maracaibo.

Lake Maracaibo in Venezuela sees more lightning strikes than anywhere else on Earth: In fact, there are thunderstorms here 300 days out of the year, according to a NASA study.

The area is so stormy because cool mountain breezes and warm, moist air clash over the lake, creating electricity. 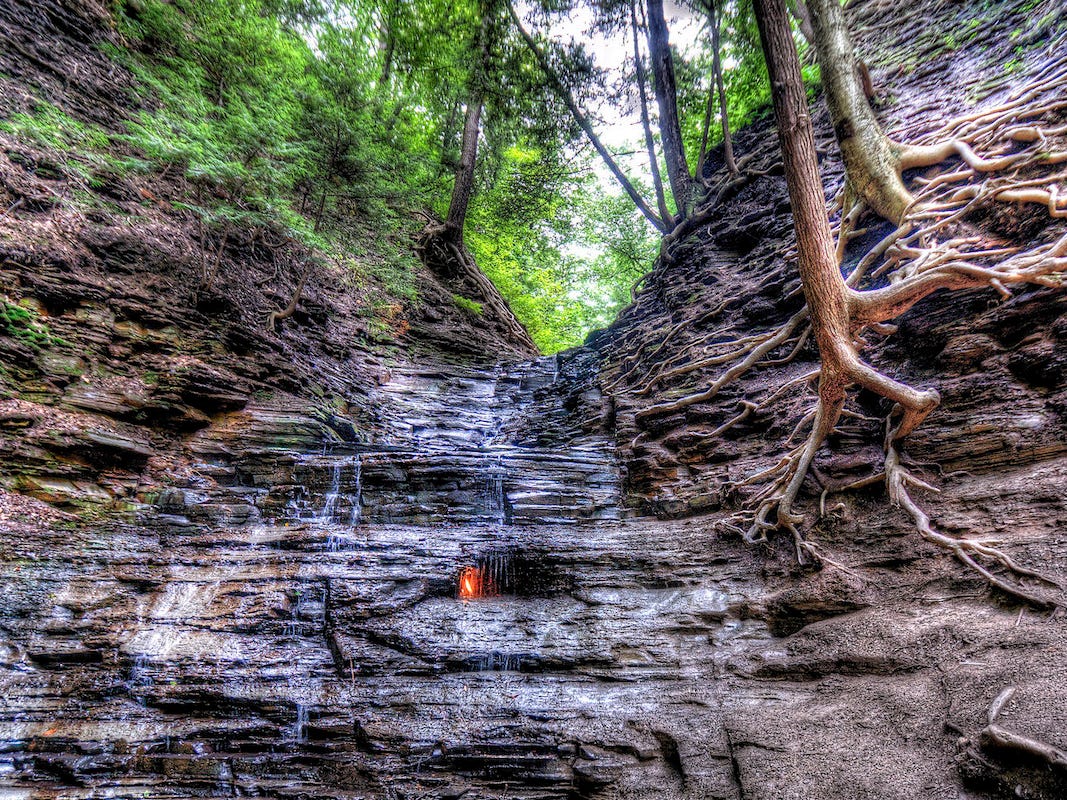 A shoot of fire behind an upstate New York waterfall.

In upstate New York, near the Canadian border, there is a small waterfall hiding a big surprise: a shoot of fire about eight inches tall.

Behind the waterfall is a natural gas seep that feeds the flame.

It’s sheltered enough by the waterfall to stay lit pretty reliably, although hikers do re-light it if they see it’s been blown out. (We should note that it’s not 100% natural — but too cool to skip.)

These burning gas seeps are actually fairly common, but this one is more interesting and younger than most — and very photogenic.

An unusual lake in Canada.

Canada’s Spotted Lake is famous for its summer style, which is heavy on the polka dots.

That’s because the lake’s water actually evaporates every summer. It leaves behind large spots, which are colorful deposits of a dozen minerals.

Further proof Spotted Lake is out of this world: Scientists are using it as a model for how ancient Martian lakes may have worked. 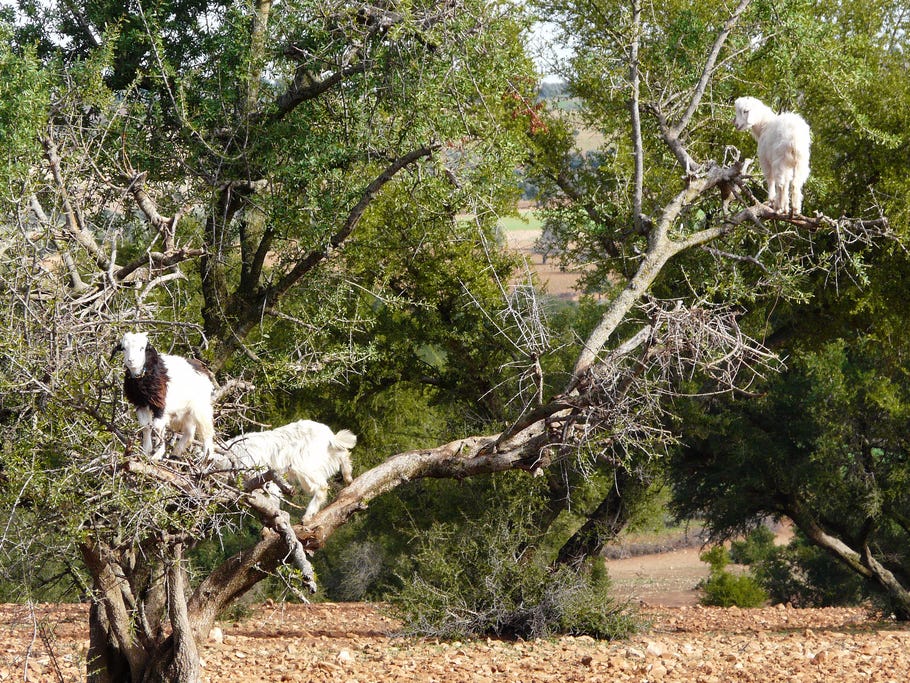 Goats in Morocco are climbing trees.

Moroccan goats have learned to climb trees in order to better snack on their tasty Argan fruit.

Local farmers like the goats so much (and their Argun-nut-filled poop, which the farmers turn into oil) that they’ve brought more goats in to enjoy the buffet. 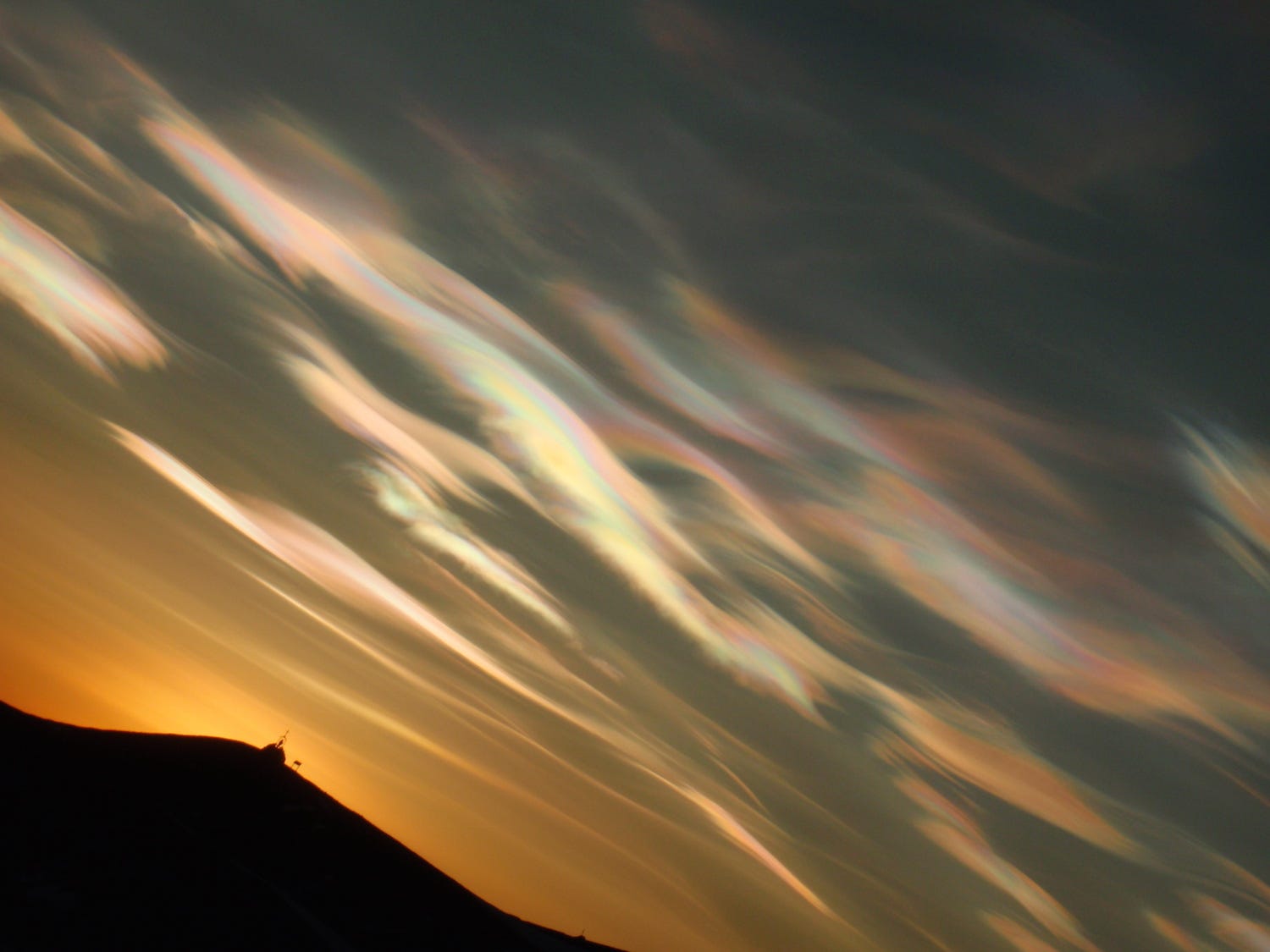 Nacreous clouds, which form very high in the atmosphere.

Usually spotted only near the poles, nacreous clouds form very high in the atmosphere (twice as high as commercial airplanes fly), where the air is particularly cold and dry.

The colorful shine actually comes from the setting sun being lower in the sky than the clouds, so they reflect sunbeams back toward Earth.

Unfortunately, while they’re beautiful, nacreous clouds also destroy ozone, the compound that protects us from the sun’s most dangerous rays. 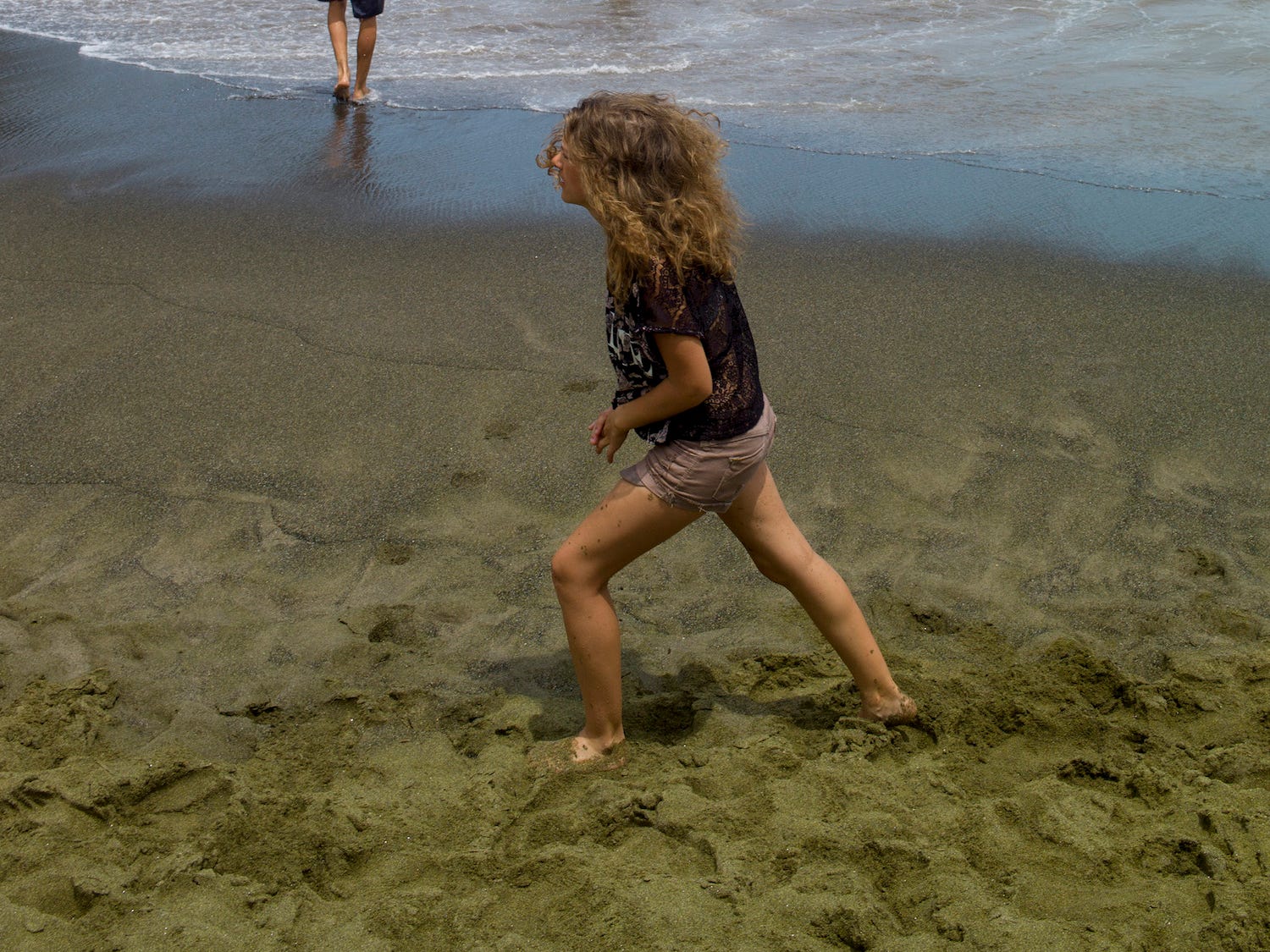 This probably isn’t what comes to mind when you dream of tropical beaches. Papakolea, also known as Green Sand Beach, in Hawaii is one of only a couple beaches in the world with green sand.

The remarkable hue comes from olivine rock that was formed during eruptions of the nearby volcano.

25. A starling murmuration, aka a ‘black sun’ 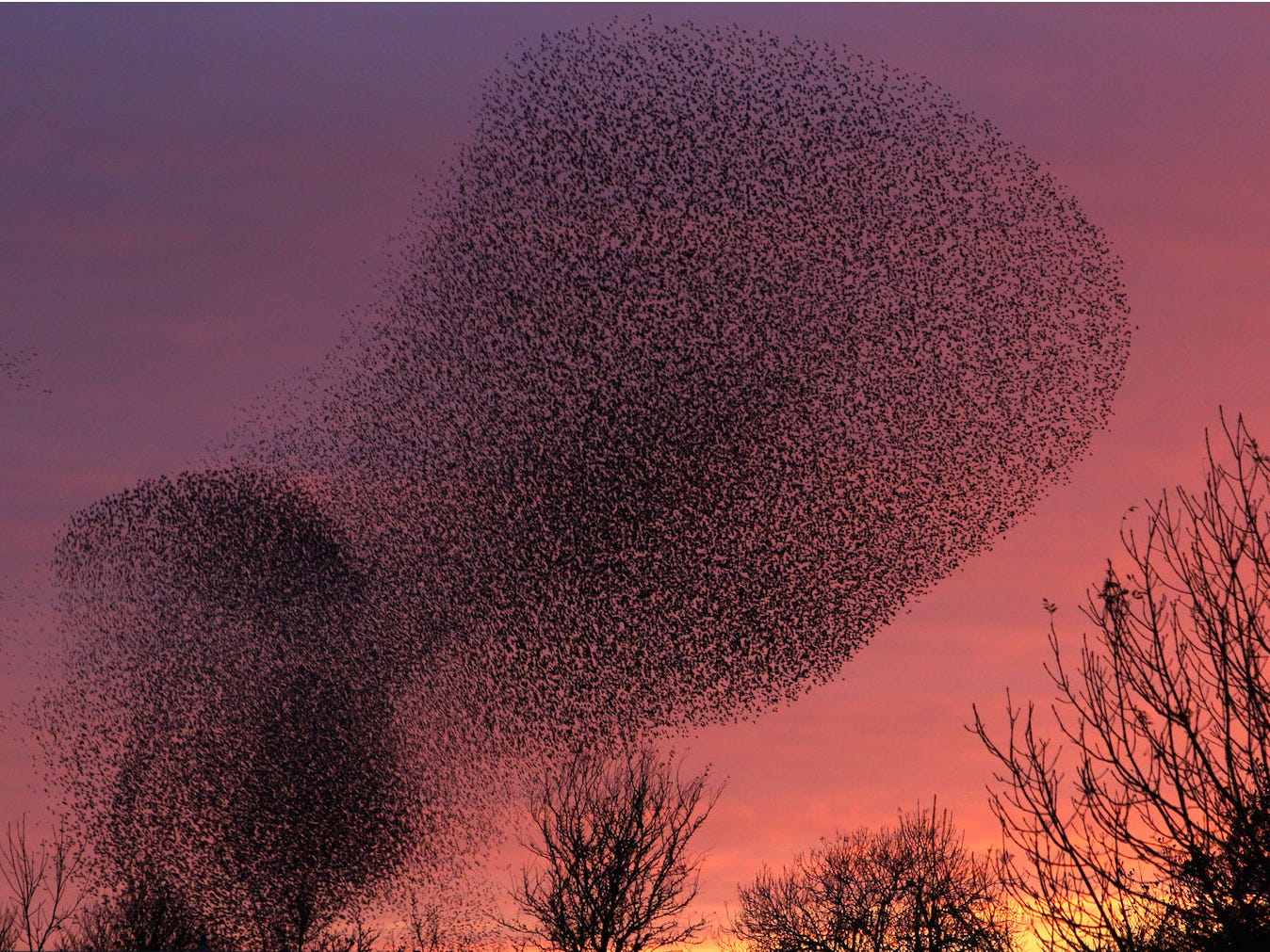 A murmuration of starlings in Britain.

An individual starling isn’t much to look at. But put hundreds or thousands together and these birds turn into an incredible dance known officially as a murmuration and nicknamed a “black sun.”

The flocks can be seen in the US and Europe, particularly in England, although the bird’s British population is now only a third of what it was 40 years ago.