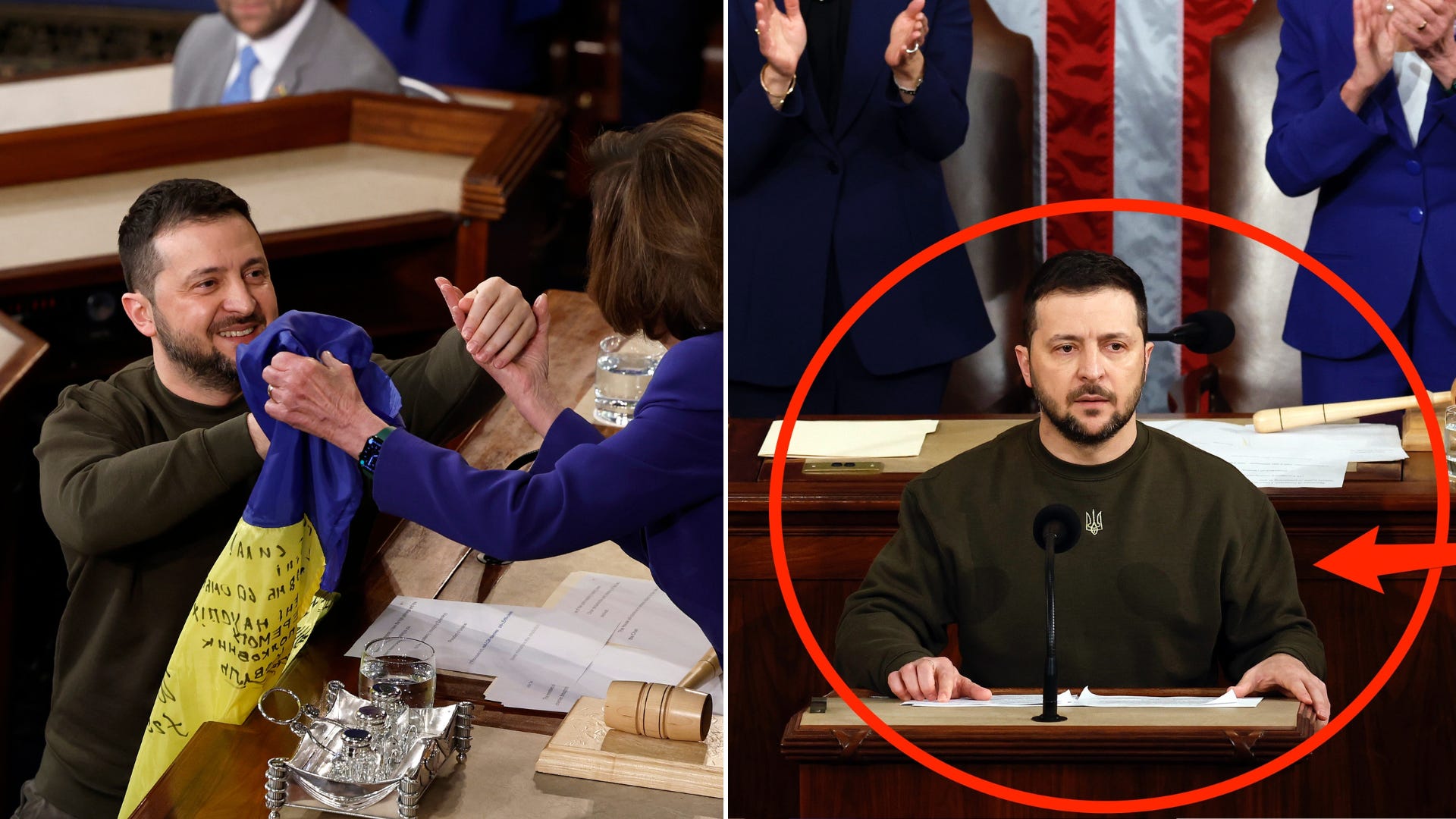 President of Ukraine Volodymyr Zelensky as he addresses a joint meeting of Congress in the House Chamber of the U.S. Capitol on December 21, 2022 in Washington, DC.

Ukrainian President Volodymyr Zelenskyy addressed Congress at the Capitol on Wednesday in an impassioned speech during his first trip abroad since Russia’s invasion in February.

After meeting with President Joe Biden at the White House earlier in the day, Zelenskyy was met with rousing applause by members of the House and Senate from both parties.

“Against all odds and doom and gloom scenarios, Ukraine didn’t fall. Ukraine is alive and kicking,” he said, using his speech to thank the US for its support throughout the war.

There were also a few symbolic aspects to Zelenskyy’s visit, as well as similarities to historic events.

President of Ukraine Volodymyr Zelensky addresses a joint meeting of Congress as U.S. Vice President Kamala Harris (L) and Speaker of the House Nancy Pelosi (D-CA) applaud, in the House Chamber of the U.S. Capitol on December 21, 2022 in Washington, DC. In his first known trip outside of Ukraine since Russia invaded, Zelensky met with U.S. President Joe Biden and outlined Ukraine’s request for continued military aid.

Zelenskyy wore an army-green crewneck sweatshirt as shook hands with Biden at the White House and spoke to a room full of lawmakers in collared shirts and suits at the Capitol. The sweatshirt was also embossed with the Coat of Arms of Ukraine, which is a gold trident.

Zelenskyy’s sweatshirt, paired with cargo pants and boots, stood in stark contrast to the suit that would usually be expected on such a visit. But the outfit, which was similar to what Zelenskyy has often worn during his addresses over the past 10 months, served as a reminder that Ukraine is still very much at war. He told FT reporter Christopher Miller that he will go back to wearing a suit when the war is over. (Insider’s Azmi Haroun broke down the importance of the sweatshirt.)

It also resembled the green t-shirt Zelenskyy was wearing during his first address from a bunker in Kyiv and continued to wear during his nightly addresses and virtual meetings with lawmakers around the world. 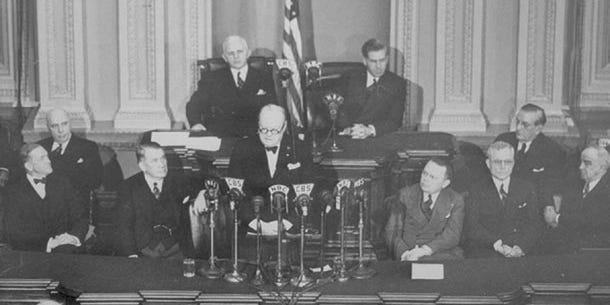 Zelenskyy’s visit just before Christmas was reminiscent of another war-time leader. British Prime Minister Winston Churchill arrived at the White House on December 22, 1941, after ten days at sea crossing the Atlantic Ocean. Churchill planned the trip, which came weeks after Japan attacked Pearl Harbor and the US entered World War II, to discuss strategy with President Franklin D. Roosevelt.

Churchill also sported a notable outfit during his visit to the White House. The prime minister wore a siren suit, which was essentially a military-style onesie of his own creation. The main purpose of the suit was so Churchill could easily put it on in the event of an air raid, according to the Science Museum in London. 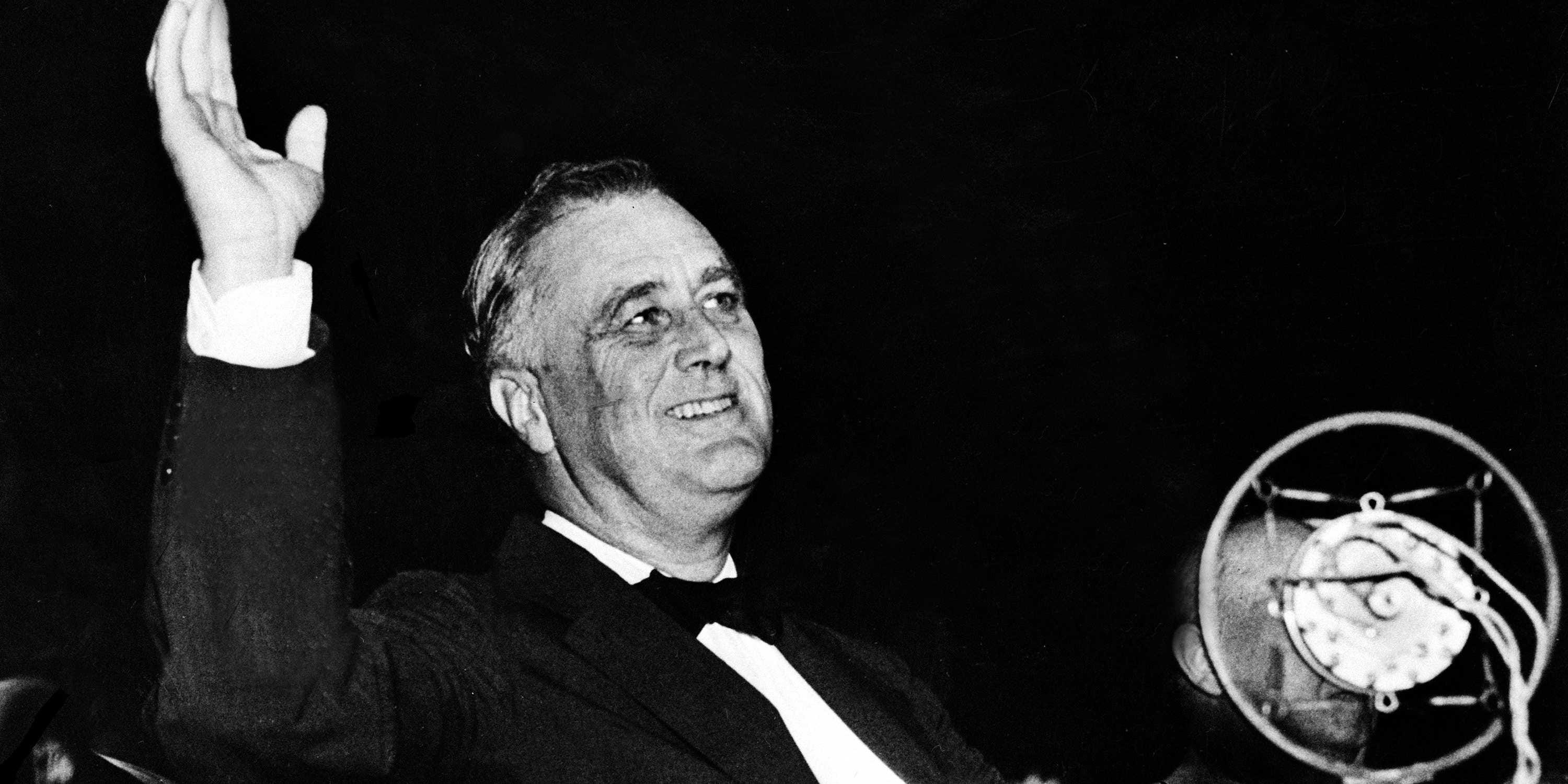 In his speech to Congress, Zelenskyy framed the war as not just one for Ukrainian independence, but for security and democracy around the world — the kind of existential threat that is reminiscent of Nazi Germany’s spread across Europe.

Zelenskyy invited a direct comparison himself by invoking a famous quote from a speech delivered by Roosevelt one day after Japan bombed Pearl Harbor.

“No matter how long it may take us to overcome this premeditated invasion, the American people in their righteous might will win through to absolute victory,” Roosevelt said.

After repeating the latter half of the quote, Zelenskyy added: “The Ukrainian people will win too, absolutely.” 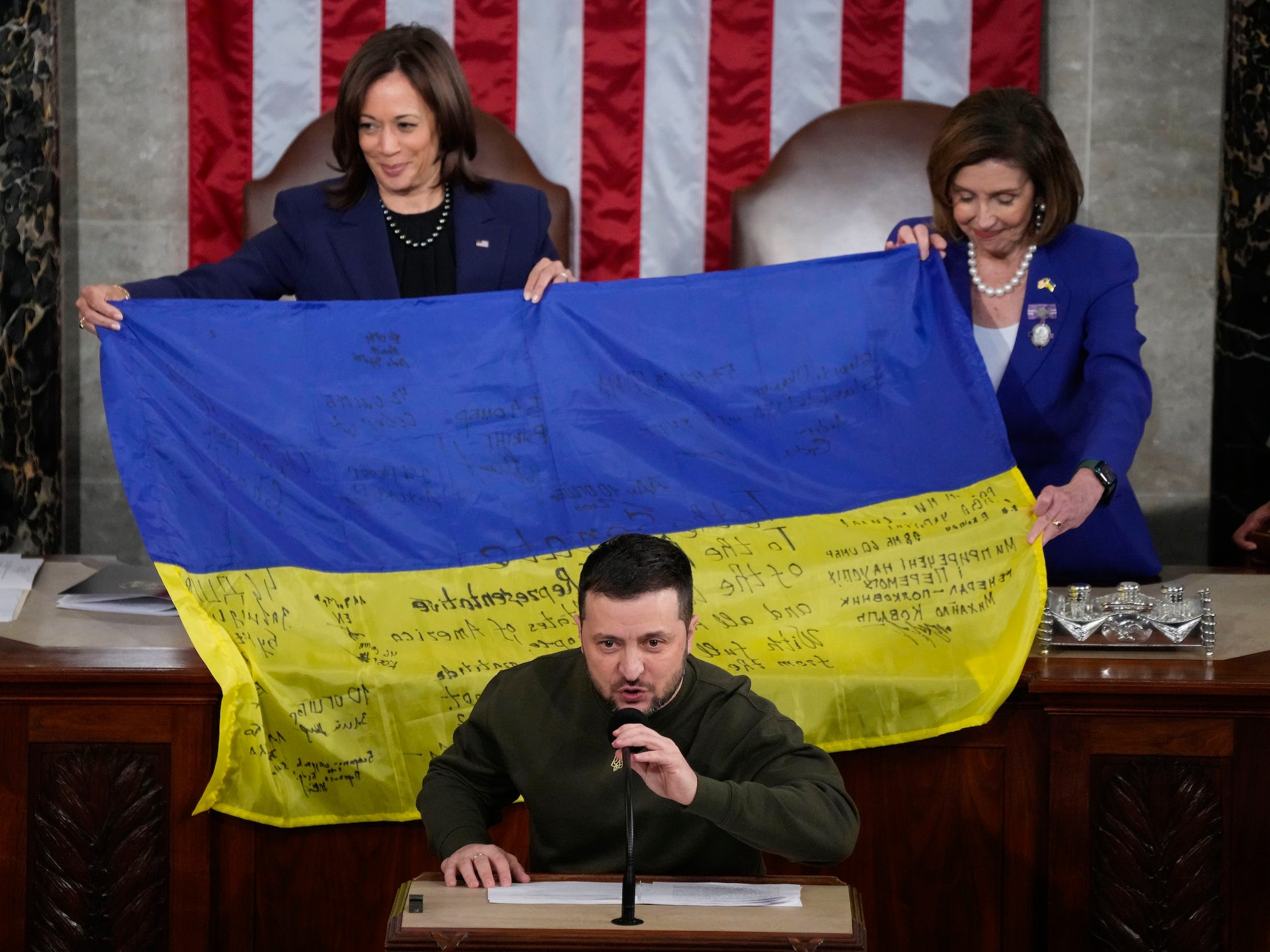 Towards the end of his speech, Zelenskyy presented House Speaker Nancy Pelosi with a Ukrainian flag that had been signed by Ukrainian soldiers fighting on the frontline in Bakhmut. He said the flag was a gift from the soldiers, who asked him to deliver the flag to the halls of Congress, where decisions “can save millions of people.”

“This flag is a symbol of our victory in this war. We stand, we fight, and we will win because we are united. Ukraine, America, and the entire free world,” he said.

Pelosi also gifted Zelenskyy with a flag — an American flag that flew over the Capitol on Wednesday — in honor of his visit.

Comparison to the Battle of the Bulge and Battle of Saratoga

Zelenskyy again made a comparison to America’s role in World War II, invoking the Battle of the Bulge.

“Just like the brave American soldiers, which held their lines and fought back Hitler’s forces during the Christmas of 1944, brave Ukrainian soldiers are doing the same to Putin’s forces this Christmas,” he said, prompting applause. “Ukraine holds its lines and will never surrender.”