The Biden administration has been particularly focused on expanding relations with Vietnam, with its booming economy and strategic location on the South China Sea. During high-level visits to Hanoi over the past 18 months, administration officials have stated very publicly that bilateral relations should be upgraded to a “strategic partnership.” The possibility of such an upgrade has been discussed for years in quiet diplomacy, but the idea has never been realized — partly due to Vietnamese concerns that it could be construed in Beijing as hostile to China. A strategic partnership is achievable, however, if both sides address the issue systematically over a reasonable timeframe.

The Trajectory of Bilateral Relations

U.S.-Vietnam relations have already expanded dramatically since diplomatic normalization was achieved in 1995 — an expansion seen in the establishment of a “comprehensive partnership” in 2013, the transfer of two U.S. Coast Guard cutters to Hanoi since 2017, and port visits by U.S. aircraft carriers in 2018 and 2020. In addition, bilateral trade has grown 200-fold since normalization, and annual U.S. investment in Vietnam has reached $2.8 billion. Vietnam sends roughly 30,000 students to U.S. educational institutions each year, ranking sixth among sending countries, and this year the first cohort of American Peace Corps volunteers arrived in Vietnam.

Washington and Hanoi have begun cooperating on the regional stage as well. Among ASEAN nations, Vietnam has most actively supported the Quad partnership between the United States, Australia, India, and Japan, with Vietnamese diplomats participating in pandemic-related dialogues with Quad members. Last year, the U.S. Centers for Disease Control and Prevention (CDC) established a regional office in Hanoi to enhance public health engagement in Southeast Asia.

This trajectory has resulted not only from shared concern over China’s aggressive actions in the South China Sea, where Hanoi has longstanding territorial disputes with Beijing, but also from popular attitudes in Vietnam strongly favoring the United States. Recent surveys of Southeast Asian policy experts have found that, within ASEAN, Vietnamese experts are especially wary of China’s growing strategic clout and are among the most supportive of U.S. influence in the region.

Hanoi Keeps an Eye on Beijing

Popular sentiment in Vietnam may favor expanded ties with the United States, but party leaders in Hanoi, all too aware of their country’s economic dependence on, and geographic proximity to, China, worry about blowback from Beijing if they get too close to Washington. They also have doubts about Washington’s long-term commitment to allies and partners in the region. And so Hanoi, seeking to balance China without provoking it, pursues a “multidirectional” foreign policy rooted in “three no’s”: no foreign troops on Vietnamese soil, no allying with one country to counter another, and no military alliances with foreign powers.

In recent months, rising U.S.-China tensions over Taiwan have only intensified Vietnam’s efforts to triangulate between Washington and Beijing. This hedging behavior was on display in late October when Vietnamese Communist Party Chief Nguyen Phu Trong paid an official visit to Beijing. Trong was the first foreign leader to meet Chinese President Xi Jinping after China’s 20th Party Congress, telling him that Vietnam gives “top priority” to “developing its comprehensive strategic cooperative partnership with China.” This party-to-party visit was not, in fact, unusual from a historical perspective, and it probably says more about China’s calculations than Vietnam’s, with Xi pointedly reminding Trong that both countries should “never let anyone interfere” with their progress.

Hanoi’s caution is understandable from an economic perspective. Although Vietnam has emerged as Asia’s growth leader, with annual growth expected to reach 7.2% in 2022, its economy has become increasingly dependent on China since 2012, when Xi became China’s paramount leader. Vietnam is by far China’s largest trading partner in ASEAN. Trade between the two countries surpassed $165 billion in 2021, more than quadruple the figure from 2012. Last year, nearly a fifth of Vietnam’s exports went to China, which, in turn, contributed a third of Vietnam’s imports. These imports are indispensable to Vietnam’s manufacturing supply chain.

Meanwhile, serious issues continue to hamper Vietnam’s bilateral relationship with the United States, including Hanoi’s longstanding procurement of Russian defense systems as well as profound differences over human rights and core political philosophies. Yet, at least some of these differences may not be as insurmountable as they appear.

Data from the Stockholm International Peace Research Institute indicate that the five-year moving average of Vietnam’s arms dependency ratio on Russia has declined from approximately 94% in 2013 to below 60% in 2021. Last week, Vietnam organized its first-ever international defense expo with the goal of diversifying the country’s defense procurement channels. The U.S.-ASEAN Business Council led a U.S. defense industry delegation to Hanoi to market their wares at the expo, and America’s ambassador to Vietnam, Marc Knapper, told the local news media that the event “represents a new stage in Vietnam’s efforts to globalize, diversify, and modernize, and the United States wants to be part of it.”

Moreover, although Vietnam is a one-party state led by a communist party, and the Biden administration has formulated a foreign policy that envisions a global struggle between democracies and autocracies, the administration’s National Security Strategy (NSS) makes an important distinction between different types of autocracies. The principal strategic challenge, the document says, comes from “powers that layer authoritarian governance with a revisionist foreign policy,” resulting in behavior that threatens international peace and stability and undermines democracy in other countries. China and Russia clearly fit into this category, according to the NSS, but “many non-democracies join the world’s democracies in forswearing these behaviors.”

Vietnam, it seems, falls squarely into the latter category, exemplified in its strong support for freedom of navigation and overflight in the South China Sea, and for the United Nations Convention on the Law of the Sea more broadly.

If the United States wishes to establish a strategic partnership with Vietnam, it should return to quiet — but persistent — diplomacy with the goal of realizing the partnership by the end of the current presidential term. Toward this end, it should seek to integrate related issues into ongoing bilateral dialogues with Hanoi (e.g., the U.S.-Vietnam Asia-Pacific Dialogue and the U.S.-Vietnam Defense Policy Dialogue) to flesh out the main focus areas of an elevated relationship. In addition to maritime security, the dialogues could explore areas of shared concern that will resonate with Vietnamese leaders and the public at large — especially pandemic prevention, climate change, and sustainable infrastructure development in Vietnam and the Lower Mekong subregion.

The administration should also scope out the possibilities of an official visit by Biden to Hanoi, or of a Vietnamese leader to Washington, just as then U.S. President Barack Obama hosted General Secretary Nguyen Phu Trong in the Oval Office in July 2015 and, a year later, visited Vietnam. Precedent suggests that the Vietnamese would expect a strategic partnership to be formalized in the context of a state visit.

The Vietnamese leadership has decisions to make as well. Given the precariousness of Vietnam’s geopolitical position and economic interdependence with China, it is understandable why the leadership prefers to deepen strategic ties with Washington quietly while keeping the diplomatic nomenclature as ambiguous as possible. But the recently concluded Comprehensive Strategic Partnership between the United States and ASEAN appears to offer a platform — and the political cover — for individual ASEAN states to conclude strategic partnerships with Washington on a bilateral level, no matter what China thinks.

Nearly 10 years ago, then Vietnamese Prime Minister Nguyen Tan Dung said it was Vietnam’s “desire to establish strategic partnerships with all the permanent members of the U.N. Security Council.” Today, Hanoi has concluded strategic partnerships with all of the Permanent 5 save one: the United States. In some ways, it would be more consistent with the basic tenants of its “multidirectional” foreign policy for Hanoi to agree to the Biden administration’s proposal to elevate relations. It might also be prudent to lock in the current gains. Given the vagaries of American politics, this could be a time-limited opportunity.

Ultimately, a strategic partnership would signal that the bilateral relationship is not just comprehensive, or the sum of its parts, but is also moving in a more ambitious direction based on shared long-term objectives — such as promoting a rules-based order in the Indo-Pacific, encouraging transparent economic governance in the Mekong, and addressing public health challenges and climate change in Southeast Asia and beyond. It would also be a natural evolution of gains already won. 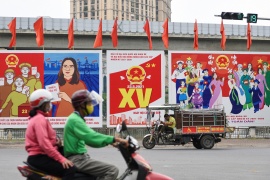