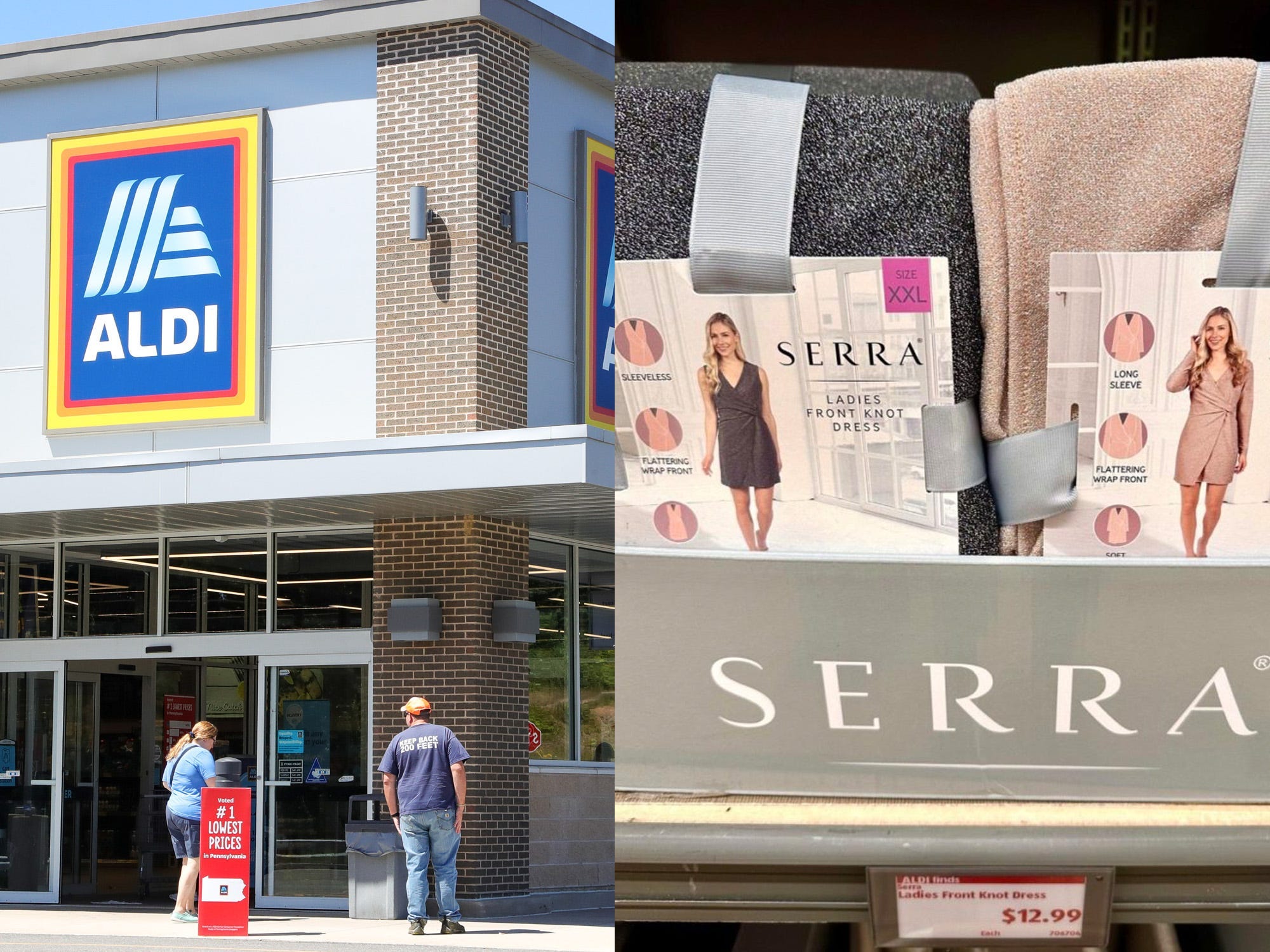 A $13 dress under the Serra brand that Aldi advertised has become a viral hit.

Aldi customers are doing whatever it takes to get their hands on a $12.99 dress that’s only available in stores.

The wrap-style dress from the brand Serra was featured in Aldi’s weekly “Aldi Finds” advertisement for the week of November 9. The budget grocery chain puts out an ad every week — in print and online — advertising discounts and new items, including products destined for the aisle of miscellaneous curiosities found in the middle of its stores. What’s on the shelves in these aisles changes regularly.

The knot-front dress, available in three colors, took off through the cheekily named “Aldi Aisle of Shame Community” Facebook group, which has more than 1.5 million members. Members began posting photos of themselves in the dress and raving about it — and then the hunt was on

“It’s like the sisterhood of the traveling pants. Everyone looks good” in the dress, Denise League of Texas told Insider.

Some customers weren’t satisfied with just one version, and went to great lengths to find the in-demand dress.

“I own three brand-new sparkly dresses and have been to probably six different Aldi stores this season,” group member Rachel Medlin told Insider.

Tracie Nicole Helms in central Mississippi doesn’t have any nearby Aldi stores, so she made two separate trips — of three hours each — to find the “sparkling gem” only to come up empty, she said. Stacey Somich in Florida had her mother in Illinois ship her the dress when she couldn’t find one locally, she said.

After more than 100 posts in the Aldi Aisle of Shame group, moderators stepped in to corral praise for the dress under one master post because it was taking over the group. In the comments, would-be dress buyers shared their sizes and asked strangers in other parts of the country to send them dresses available in their local stores. 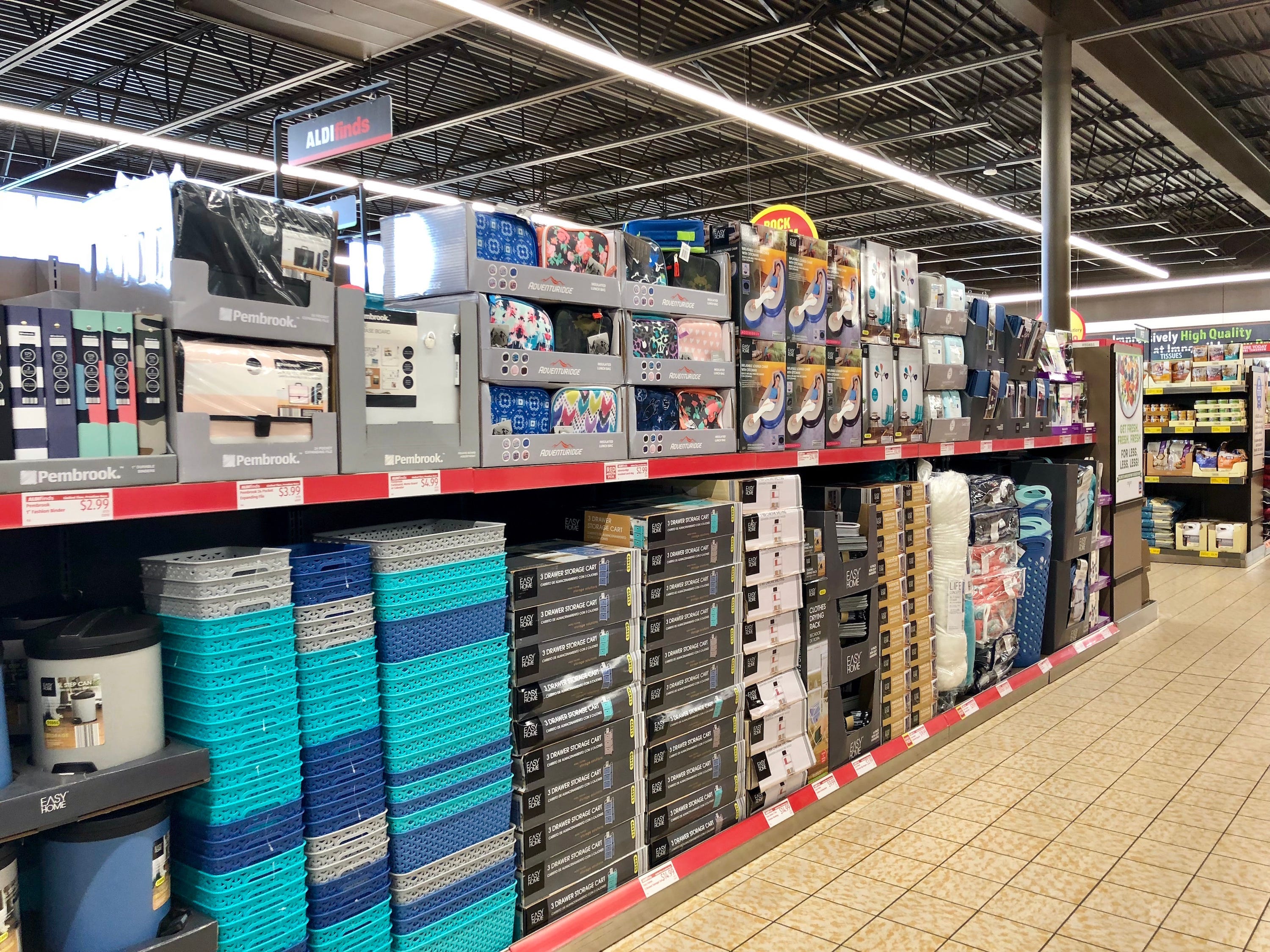 Aldi’s “Aldi Finds” aisle is a grab bag of products that changes throughout the year.

The dress’s massive popularity among Aldi superfans shows a key part of the budget chain’s strategy is working, even as consumers are tightening their belts and cutting down on nonessential purchases.

Aldi’s well-known “Aldi Finds” aisle — which some superfans jokingly call the “Aisle of Shame” — changes offerings regularly to new themes, like outdoor items in the summer and Advent calendars ahead of the holidays. Items are divided about 50-50 between food and other goods, RetailWire reported, with the store using the aisle as a testing ground for new food items before extending them to the main area of the store.

These items make up about 20% of all sales, Nils Brandes, the coauthor of the book “Bare Essentials: The Aldi Success Story,” previously told Insider. The items are advertised beforehand and only stocked in limited numbers, so they become a “treasure hunt” for shoppers, according to Suzy Monford, an executive at retail technology firm Focal Systems.

Shannon Vissers, an analyst at product review site Merchant Maverick, said that the aisle is a “smart business model” with a “great return” because products are typically overstock items from suppliers that Aldi buys at a discount.

Aldi did not respond to Insider’s request for comment, but as Aldi plans to continue its rapid expansion, its Aldi Finds aisle likely will remain a key part of future store designs.

Do you have a story to share about a retail or restaurant chain? Email this reporter at mmeisenzahl@businessinsider.com.