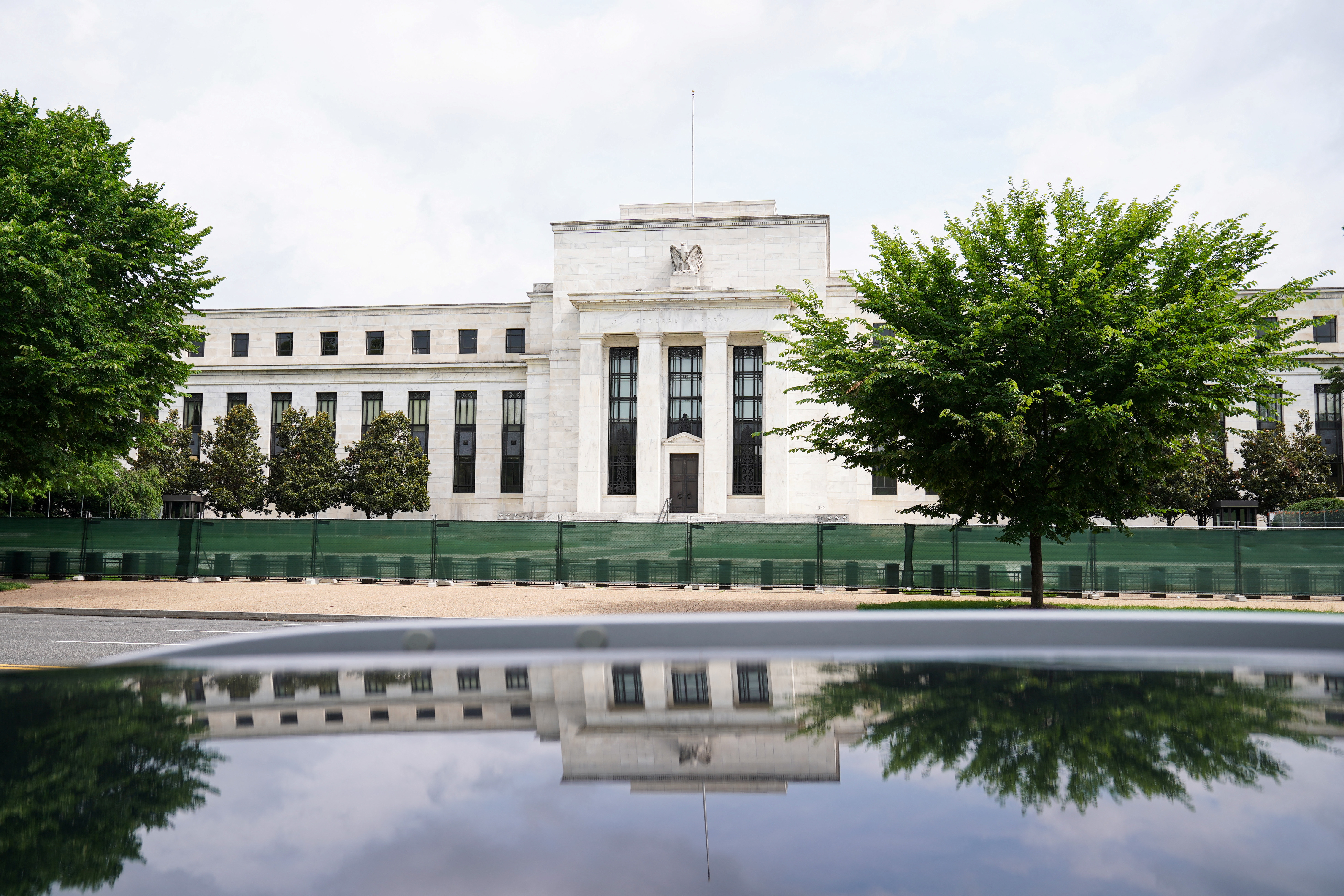 The exterior of the Marriner S. Eccles Federal Reserve Board Building is seen in Washington, D.C., U.S., June 14, 2022. REUTERS/Sarah Silbiger

Some investors believe an expected recession will force the Federal Reserve to loosen monetary policy next year, even as the central bank projects it will raise rates higher than it previously anticipated and keep them there longer as it fights to crush inflation.

The dynamic came into stark focus after the Fed’s monetary policy meeting on Wednesday, when it delivered a widely expected 50 basis point rate increase and projected borrowing costs will rise by an additional 75 basis points by the end of 2023 – half a percentage point higher than officials forecast in September.

Such a move would take the fed funds rate to around 5.1%, according to the median estimate in the Fed’s quarterly summary of economic projections – a level not seen since 2007. The fed funds rate currently stands in the 4.25%-4.50% range.

Rates futures markets told a different story, however, with investors late Wednesday betting the Fed would continue raising rates in the first half of 2023 before cutting them back to around 4.4% by year end.

“The Fed is struggling to convince markets to move in their direction,” said Ed Al-Hussainy, senior global rates strategist at Columbia Threadneedle, who is betting that 10-year Treasuries will continue a recent rebound. “There’s … lack of belief in the Fed’s ability to move rates significantly above 5 percent.”

How much higher borrowing costs will rise and whether restrictive monetary policy will plunge the economy into recession are questions that have consumed investors for months, as the Fed embarks on its most aggressive rate increases since the 1980s to defeat surging inflation.

While Fed Chair Jerome Powell said on Wednesday that the Fed’s projections don’t necessarily mean the economy will fall into a recession, he suggested the risk is worth it and that policymakers have no plans to cushion the blow by cutting rates – echoing a message he has delivered on previous occasions.

Nonetheless, hopes that inflation will peak and allow the Fed to stop raising rates sooner have reverberated throughout markets in recent weeks, sparking a rally in the S&P from its recent lows, toppling the U.S. dollar from a two-decade high and fueling a sharp rebound in battered Treasuries.

Yields on the benchmark 10-year Treasury, which move inversely to prices, recently stood around 3.5%, compared with over 4.2% earlier this year. The S&P 500 has risen by 11.4% in the fourth quarter but remains down some 16% for the year. U.S. consumer prices rose less than expected for a second straight month in November, data showed Tuesday.

“The market moves really describe the challenges that they are facing, which is not so much inflation-fighting credibility, but credibility on being hawkish and sticking to their guns,” said Sonal Desai, CIO of Franklin Templeton Fixed Income, referring to the Fed.

Among those forecasting lower rates are fund manager Vanguard, Deutsche Bank and Bank of America, with the last two forecasting a recession next year and predicting that the Fed will start cutting rates by December 2023.

“The markets believe that the Fed is going to have to ease by the end of next year and nothing from the Chairman today disabused them of that notion,” said RJ Gallo, a portfolio manager at Federated Hermes. He is currently overweight U.S. Treasuries and mortgage-backed securities.

Christopher Alwine, head of the global credit team in Vanguard Fixed Income Group, believes the economy will fall into a shallow recession in the second half of next year, prompting the Fed to cut rates by the fourth quarter of 2023.

“We don’t feel the market is that far off on pricing, but a little bit ahead of itself on the easing cycle,” he said.

Plenty of investors believe the Fed will stick to its guns, even if the economy wobbles. The Fed’s economic projections showed rates dropping to 4.1% in 2024, higher than estimated three months ago.

“(The Fed’s) statement and economic projections tell a simple, but persuasive story: This Fed isn’t prepared to ‘pivot’ in any meaningful way until it sees sustained and conclusive evidence of a reversal in inflationary pressures,” said Karl Schamotta, chief market strategist at Corpay.

Desai, of Franklin Templeton, is taking Powell at his word. She is expecting the gyrations that rocked bonds this year to continue, driven in part by investors second-guessing the Fed’s commitment to keeping monetary policy tight.

“The market truly is conditioned to expect that the Fed is going to jump in,” she said. “We have a generation of traders that has never seen the Fed not bail it out when push comes to shove.”