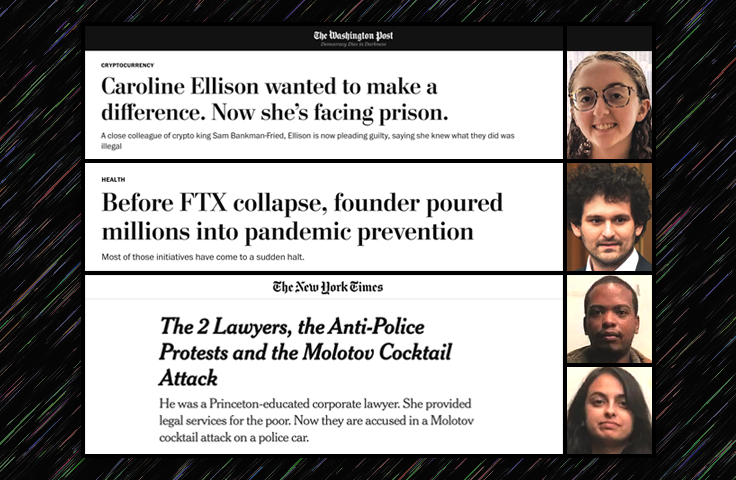 The Washington Post published an absurd story about Caroline Ellison, the admitted crypto fraudster who is helping federal prosecutors build a case against her former lover Sam Bankman-Fried, the disgraced FTX founder who remains an alleged crypto fraudster. (SBF pleaded not guilty to multiple felonies on Tuesday.)

What did it say?

Ellison was raised by “accomplished academics” and educated at a “prestigious” university (Stanford). She was a gifted child who read “a thick Harry Potter book when she was just 5” and grew up to espouse “the importance of giving money away to make the world a better place.”

Indeed. Here’s the headline: “Before FTX collapse, founder poured millions into pandemic prevention.” The story explains that SBF was “raised in an elite academic family” and “became committed to philanthropy at a young age” before setting out to save the world by giving millions of dollars to Democratic politicians and the various causes they support.

Jeez. Next they’ll be writing puff pieces about actual terrorists.

Been there, done that. In 2019, the original headline on the Post‘s obituary for ISIS leader Abu Bakr al-Baghdadi described the dead thug as an “austere religious scholar.”

What about domestic terrorists?

Yep. Remember those well-credentialed lawyers who firebombed a police car during the “mostly peaceful” riots in the summer of 2020? The New York Times and New York magazine published fawning profiles of the criminals and defended their efforts to “embrace a more flexible definition of ‘lawless'” because “nothing else works.”

Urooj Rahman, who threw the Molotov cocktail, attended “one of the most selective public high schools in New York” before advancing to Fordham Law. She spent a summer in “Occupied Palestine” and cared deeply about “people who were systemically oppressed”

Rahman’s accomplice, Colinford Mattis, went to Princeton and NYU before becoming a corporate lawyer. He had a goldendoodle named “Lorde Hampton” and “was always available to give friends a ride.” Indeed, he was driving while Rahman tossed the Molotov cocktail out the passenger window.

That’s pretty messed up. Has the Washington Free Beacon conducted an analysis?

We have. The analysis determined that liberal élites are unreasonably credulous and sympathetic toward élite liberals who commit unsavory acts, and keep getting scammed by criminals who give lots of money to élite liberal institutions.

What in the actual f— is wrong with these people?

Are there any other examples you think I would find particularly shocking?