In the twilight of the Soviet Union, Yevgeny Prigozhin was languishing in prison for theft. Now as the founder of Russia’s most powerful mercenary group, he is vying for Vladimir Putin’s favour by claiming a rare battlefield win in Ukraine.

His aim is to leverage the success that Wagner Group, his mercenary outfit, had this week in pushing Ukrainian forces out of the salt mining town of Soledar, a move that revives Russian plans to seize more of eastern Ukraine after multiple defeats.

Russia claimed victory on Friday after Ukraine said its forces were holding on after a ‘hot’ night of fighting. Reuters could not immediately verify the situation in the town.

Prigozhin, 61, who is sanctioned in the West and casts himself as a ruthless patriot, has posed in combat gear with his men in a salt mine deep beneath Soledar and said they were fighting alone, an assertion contradicted by defence officials.

The Kremlin on Thursday spoke of the “absolutely heroic selfless actions” of those fighting in Soledar. The defence ministry on Friday attributed victory to its airborne units, missile forces and “artillery of a grouping of Russian forces”.

Prigozhin said Russian officials were not giving his forces their due credit.

“They constantly try to steal victory from the Wagner PMC (private military company) and talk about the presence of other unknown people just to belittle Wagner’s merits,” he complained.

Some commentators have said he could one day be made defence minister, but it is not fully clear how much influence the businessman from St Petersburg has gained with Putin, who tends to balance factions with a strategy of divide and rule.

Prominent Putin supporters, some with access to the Russian leader, have contrasted Prigozhin’s progress with what they say has been a less impressive performance by the regular military.

Sergei Markov, a former Kremlin adviser, has hailed the shaven-headed mercenary chief as “a new hero.”

“Prigozhin has flaws too. But I won’t tell you about them. Because Prigozhin and Wagner are now Russia’s national treasure. They are becoming a symbol of victory,” Markov wrote on his blog, saying they should be given more resources by the state.

Margarita Simonyan, editor-in-chief of the state-controlled RT channel and close to the Kremlin, thanked Prigozhin for Soledar.

Prigozhin has played down the idea he is seeking official elevation in the past, while not emphatically ruling it out. His press service, and the Kremlin, did not immediately reply to requests for fresh comment.

Putin has said Wagner does not represent the state and is not breaking Russian law and has the right to work and promote its business interests anywhere in the world.

One of the military bloggers who help shape Russians’ view of the conflict likened Prigozhin to a Roman centurion licensed to operate above and outside the law to achieve Putin’s goals.

“A couple more successful Wagner operations and online votes proposing Prigozhin for Minister of Defence will cease to be fantasy,” said Zhivov Z.

Yet Igor Girkin, a Russian nationalist and former Federal Security Service officer who helped launch the original Donbas war in 2014 and is under U.S. sanctions, has said Prigozhin is careless with the lives of his men. He has also said capturing Soledar and nearby Bakhmut would not be militarily significant.

Prigozhin, nicknamed “Putin’s Chef” by Western media because he once ran a floating restaurant in St Petersburg where Putin ate, has plenty to gain or lose.

He has his own future to consider at a time of tumult as well as the commercial interests of Wagner, which Russian officials say has military and mining contracts in Africa and is active in Syria. He also has a vast catering company serving state entities, as well as troll farms and media outlets.

“In essence, he is a private businessman who is highly dependent on how his relations with the authorities are structured. This is a very vulnerable position,” said Tatiana Stanovaya, founder of the R.Politik analysis firm.

The attendance on a Wagner training course this month of the governor of Russia’s Kursk region bordering Ukraine looked like another way for Prigozhin to enhance his connections, she said.

Russia has allowed Prigozhin to recruit tens of thousands of convicts from its prisons for Wagner, which U.S. officials say is a 50,000-strong force, and let him equip them with tanks, aircraft and missile defence systems.

It has also stood by while he flung sometimes profane criticism at the top brass, although some Western military analysts suggested the appointment of the most senior general to lead the war in Ukraine was designed to balance his influence.

Before Russia’s invasion, something Moscow calls “a special military operation”, Prigozhin had denied his Wagner connection. In September, he said he had founded the mercenary group in 2014.

Despite its sometimes publicly strained ties with the Russian defence ministry, some Western military analysts suspect Wagner is closely affiliated with it.

Leonid Nevzlin, an Israel-based former executive at oil major Yukos which he says was illegally appropriated by the Russian state, something it denies, said this week there was a risk Wagner could throw off Kremlin control.

One source close to the Russian authorities, who declined to be named because they were not authorised to speak to the media, said the Kremlin viewed Prigozhin as a useful operator but maintained unspecified safeguards over leaders of armed groups.

“There is a ceiling (of growth) and mechanisms in place,” said the source, who declined to provide more details. 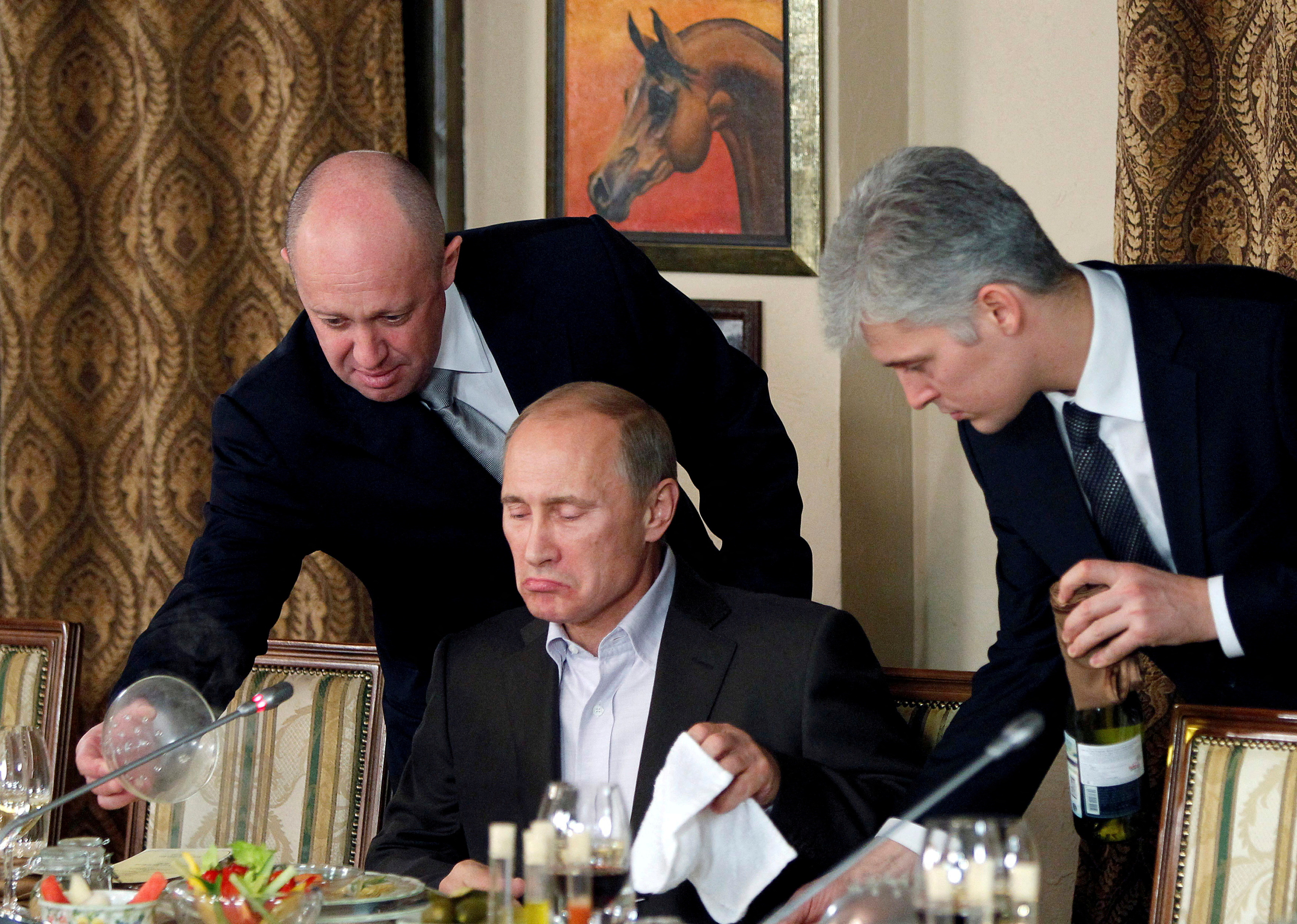 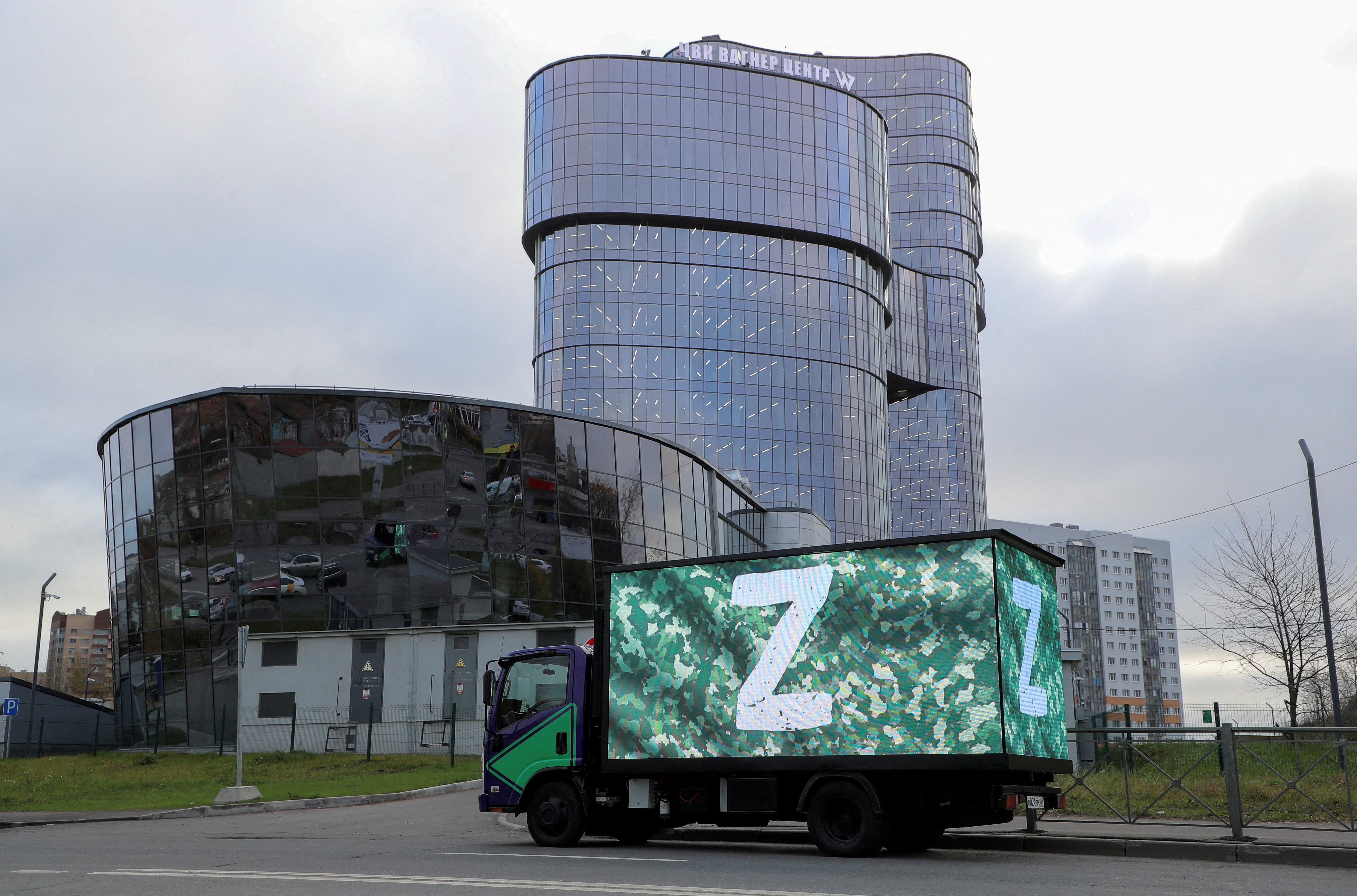 A truck displaying “Z” symbols in support of the Russian armed forces involved in a military conflict in Ukraine is parked outside PMC Wagner Centre, which is a project implemented by the businessman and founder of the Wagner private military group Yevgeny Prigozhin, during the official opening of the office block in Saint Petersburg, Russia, November 4, 2022. REUTERS/Igor Russak
获取更多RSS：
https://feedx.net
https://feedx.best