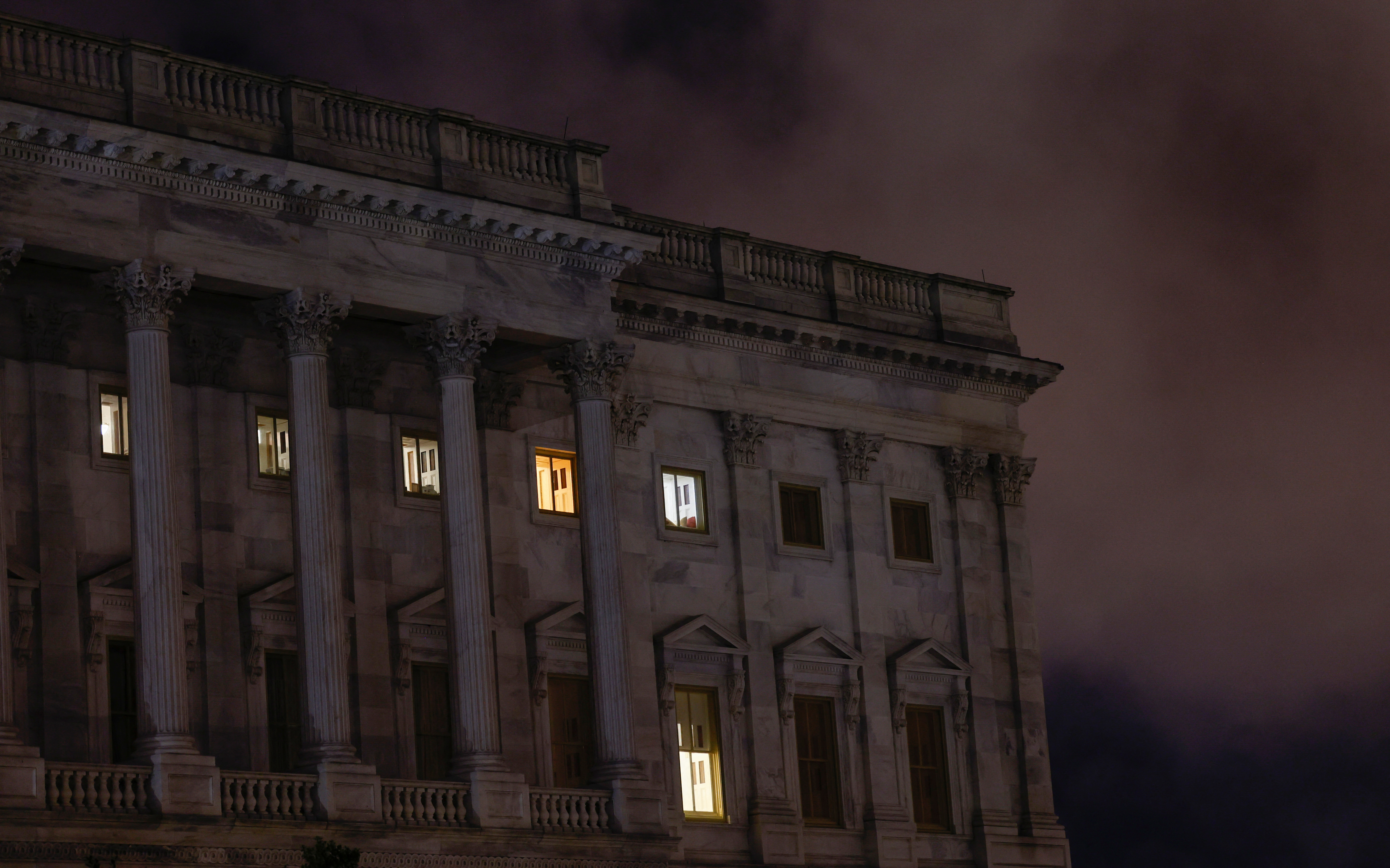 Late night office lights burn on the House of Representatives side of the U.S. Capitol after another day of voting, but no resolution, in the election of the new Speaker of the House, as Republican Leader Kevin McCarthy (R-CA) lost a sixth straight round of voting on the second day of the 118th Congress at the U.S. Capitol in Washington, U.S., January 4, 2023 REUTERS/Evelyn Hockstein

Three days into a standoff over who would lead the Republican-majority U.S. House of Representatives, members of the party expressed anger that a small group of hardline holdouts were squandering their chance to use the power they had won.

The party’s leader in the chamber, Kevin McCarthy, was set to make another bid on Thursday for the powerful position of speaker, after being rejected in six votes by a group of 20 hardline Republicans who represent less than 10% of the caucus.

“You have 20 people demanding that 201 surrender to them unconditionally. Well, I am not going to surrender,” Republican Representative Trent Kelly told reporters after a late Wednesday vote rejecting McCarthy.

He was joined by 17 other Republicans who expressed similar views, with Representative John James accusing the 20 holdouts of “governing on fear.”

A weaker-than-expected performance in the November midterm elections gave Republicans a smaller-than-expected 222-212 majority in the House. McCarthy would need 218 votes to be elected speaker, a role second in line to the Oval Office, and the narrow margin gives the hardliners outside influence.

Members of the opposition say they are concerned McCarthy would not pursue the scorched-earth tactics they want to take to counter Democratic President Joe Biden and the Democratic-controlled U.S. Senate.

“Is he going to fight for us? Is he willing to shut the government down?” Representative Ralph Norman, who has voted against McCarthy all six times, told Reuters. “His history has not been that.”

The leadership fight has prevented individual lawmakers from taking their oaths of office and pursuing priorities like investigating the administration of the Democratic president. The inability to agree on a leader also raises questions about how lawmakers will be able to reach accord on key issues that will arise later this year, including funding the government and addressing the nation’s approaching debt ceiling.

The last time the House failed to elect a speaker on the first ballot was in 1923, during a contest that took nine ballots to resolve.

McCarthy said late on Wednesday that he was making progress, but it was not clear whether he would win over the holdouts or if the party would have to search for an alternative when the chamber reconvenes at noon (1700 GMT) on Thursday.

Possibilities include number two House Republican Steve Scalise and Representative Jim Jordan, who have both said they backed McCarthy. Jordan, who received 20 votes when nominated on Tuesday.

Republicans could also look to Democrats for help, although House Democratic Leader Hakeem Jeffries told reporters that they have not reached out.

Democratic Representative Ro Khanna told Reuters he and others could support a moderate Republican who would agree to share subpoena power with Democrats and to avoid brinkmanship over government funding and the debt ceiling.

McCarthy’s supporters said they were sticking by him.

Trump remains an influential figure among Republicans and is so far the only announced presidential candidate for 2024. Some in the party have blamed Trump for the failure of Republicans to win more congressional seats in the midterms.

Some Republicans said the standoff was not likely to end soon. “It could go into the weekend. We hope it doesn’t, but it could,” said Representative Scott Perry, a Trump ally who has helped spread the former president’s false election claims but who opposes McCarthy.