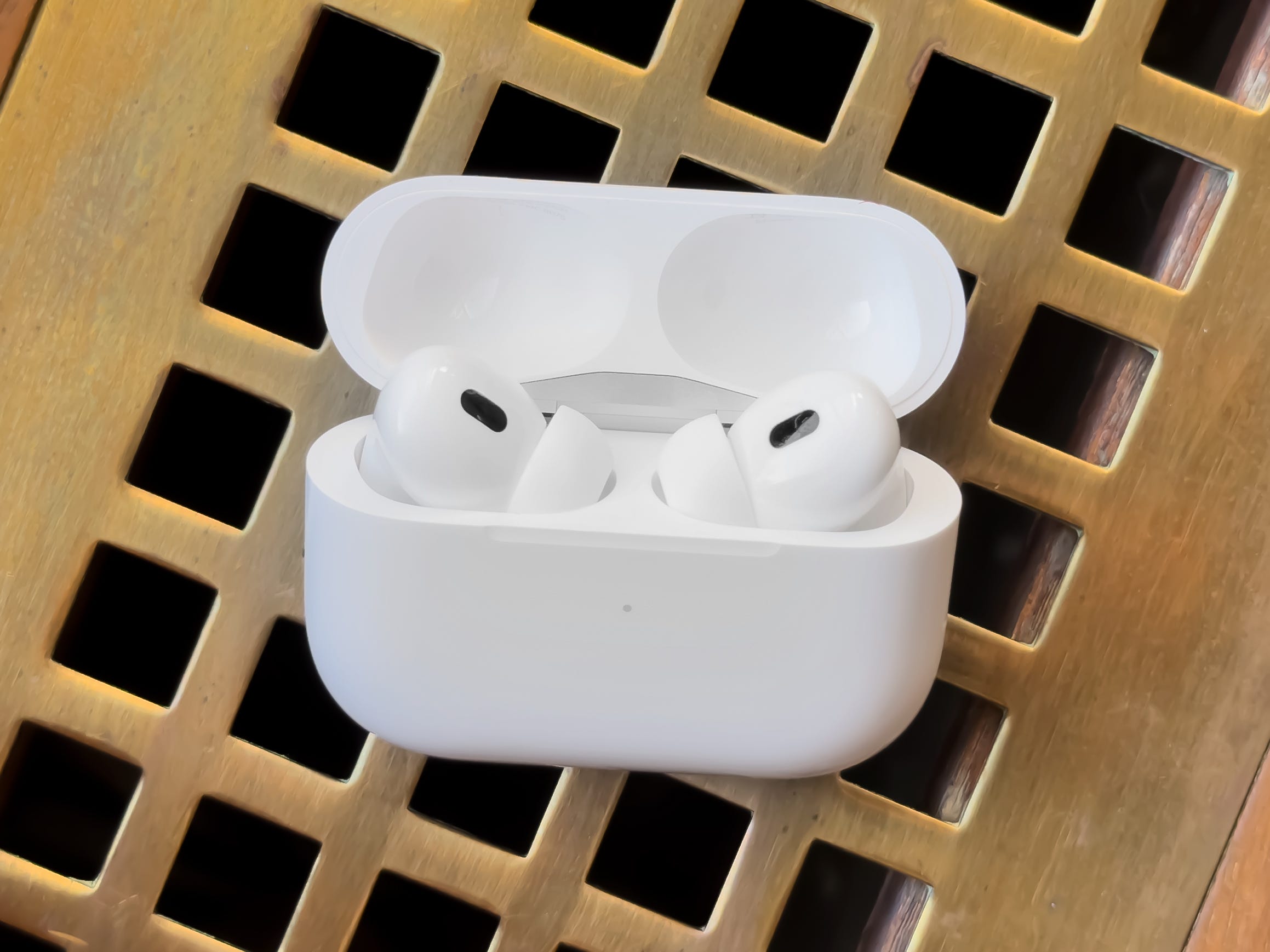 Apple’s second-generation AirPods Pro come three years after the originals were released, and they’re a massive improvement on all the fronts that matter.

The new AirPods Pro look identical to their predecessors, but the meaningful upgrades come with how they perform. You can thank Apple’s all-new H2 chip for significantly improved sound quality, noise cancellation, and battery life, plus advanced features like “adaptive” transparency mode.

The original AirPods Pro are an excellent choice for Apple fans. But I’d argue the upgrades make the second-gen AirPods Pro the most logical one. While there are plenty of alternatives out there, Apple’s flagship wireless earbuds are now among the best-in-class, and hard to beat if you own an iPhone. 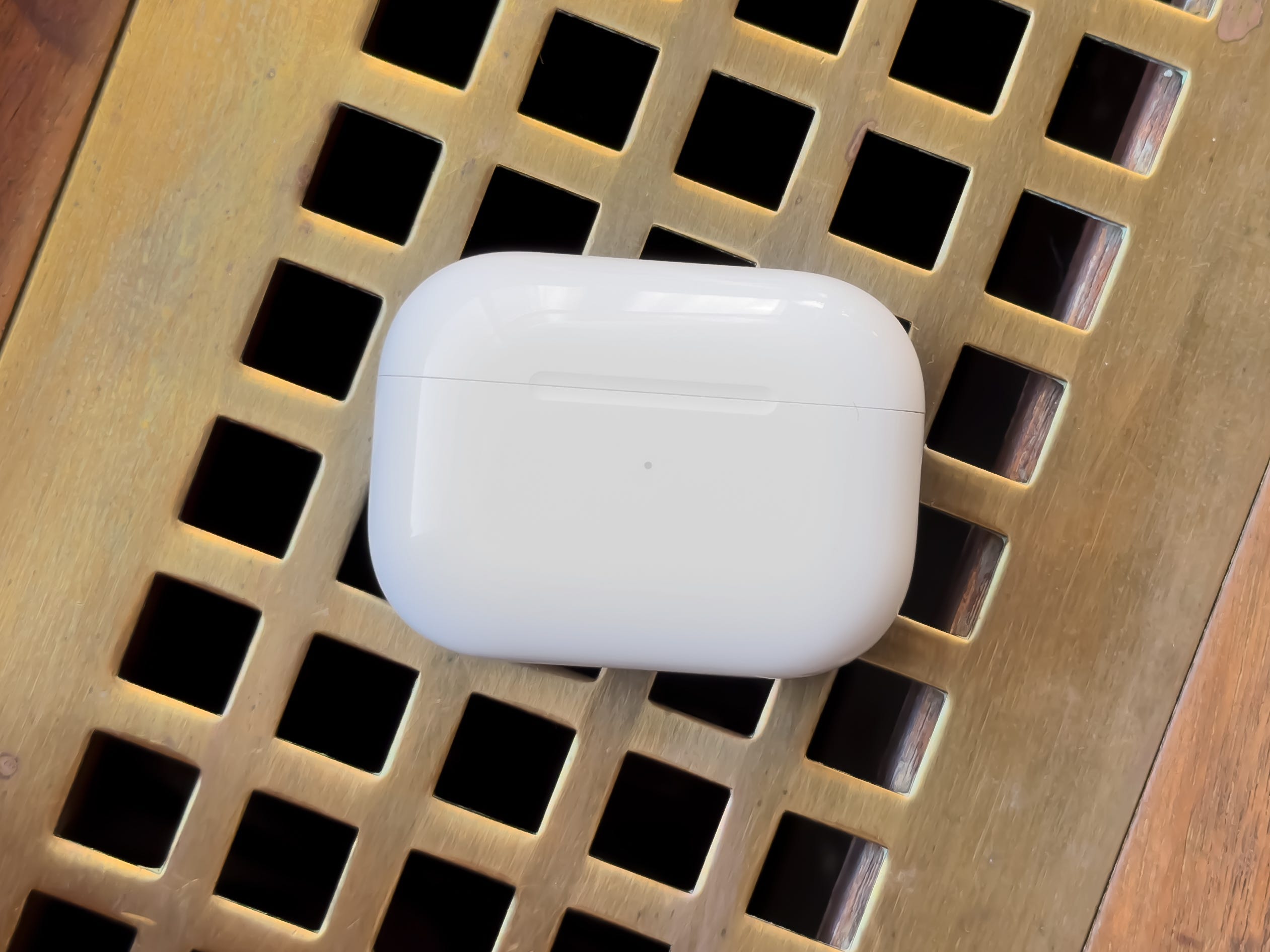 The earbuds and charging case have a nearly identical design as the original AirPods Pro.

Aside from a few subtle tweaks to the positioning of the microphones and vents, the new AirPods Pro are nearly identical to their predecessor. If the fit of the original Pros treat you right, these will do the same.

In an effort to cater to more ears, Apple includes four eartips in the box instead of three.  The added extra-small silicone eartip should please anyone who found the fit of first-gen AirPods Pro too cramped in the ear.

When it comes to design, the bigger headline is in the charging case. The case’s new U1 chip enables “Precision Finding” with the Find My app, which gives you visual direction and distance indications to where it is. The charging case also features a speaker that plays a sound, so you get an aural indication, too. And as a little bonus, there’s a new lanyard loop on the left edge of the case.

The charging case speaker also gives you audio notifications for low battery, and it chimes when you start charging or when pairing is complete. It’s now water- and sweat-resistant, and as expected, it’s also compatible with MagSafe.

Apple claims the second-gen AirPods Pro earbuds themselves have six hours battery life, and the MagSafe charging case can hold up to 30 hours of charge. That’s an improvement over the original AirPods Pro, but about the same as other premium wireless earbuds. 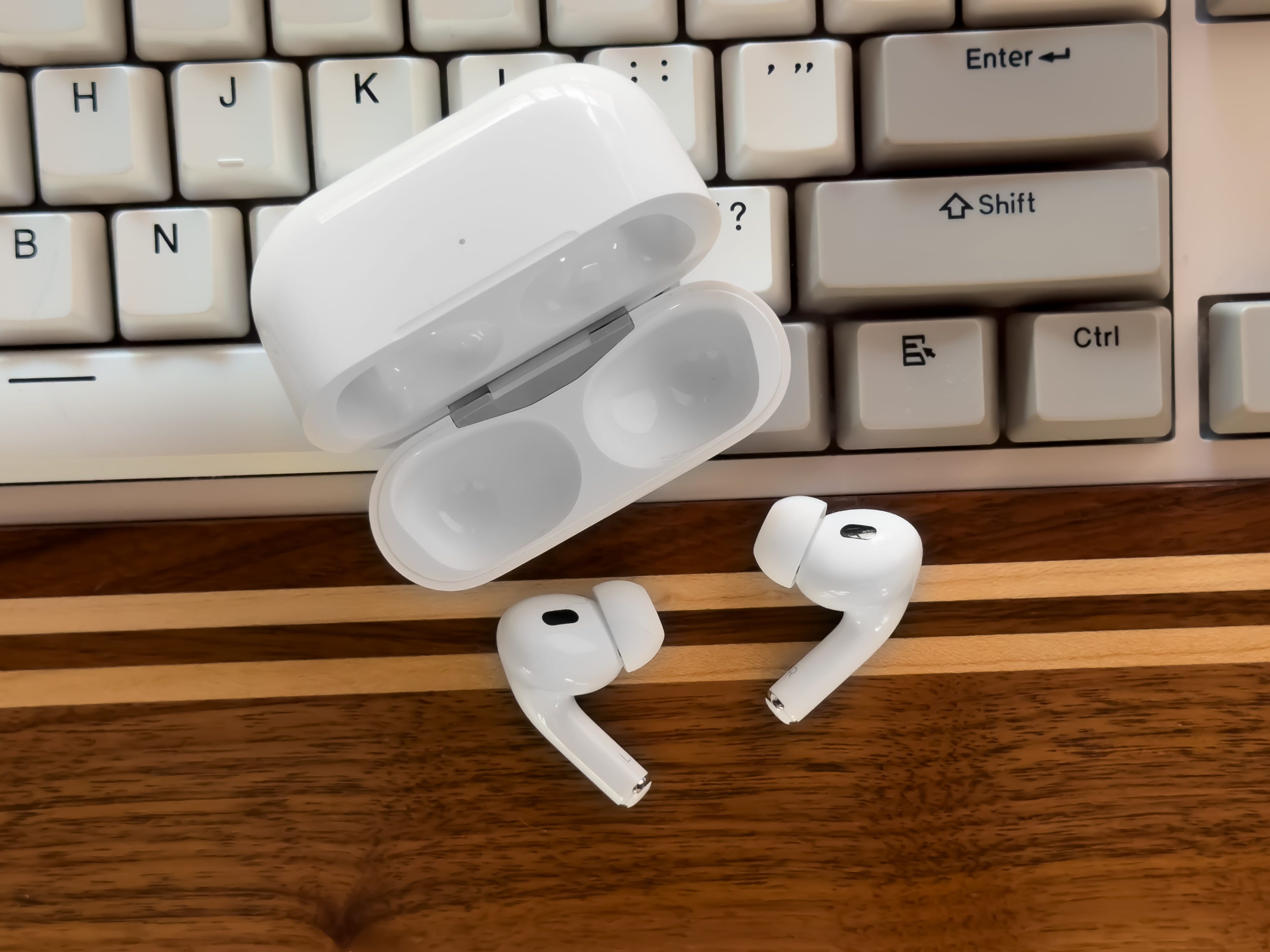 Improved sound quality and noise cancelling puts the AirPods Pro in the same league as premium wireless earbuds from Sony and Bose.

The second-generation AirPods Pro is the first pair of Apple earbuds powered by the H2 chip, which brings improved sound and active noise cancellation, adaptive transparency mode, and the aforementioned longer battery life.

Compared to other premium wireless earbuds, the original AirPods Pro always sat at the bottom of the noise-cancellation performance chart. That’s all changed with the second-gen Pros. Apple claims the second-gen AirPods Pro have up to twice the noise-cancelling performance as the originals, and I’m inclined to believe them — the world is much quieter when you want it to be, from the low hum of a commuter train and people chattering, to higher pitches from cars driving in the rain.

While the sound is a big improvement from the original Pros, it’s worth noting the active noise cancellation is not as top-tier as Sony’s XM4 earbuds or Bose’s QuietComfort Earbuds II. I’d also argue that even Jabra’s midrange Elite 85Ts offer a better overall sound experience because it allows you to customize the sound to your liking with equalizer adjustments, while the AirPods don’t.

Rather, the second-gen AirPods Pro include Apple’s Adaptive EQ that automatically adjusts the sound they produce based on the shape of your ears. It’s a useful feature, but I’d like to see an option that lets users adjust their own EQ settings.

The new AirPods Pro also come with Apple’s personalized Spatial Audio (similar to Sony’s 360 Reality Audio), a 360-degree surround sound format that results in an “immersive” listening experience. I can’t say that I notice much of a difference whether I have the feature on or off, even with songs from Apple’s “Made for Spatial Audio” playlist.

But perhaps the best new feature powered by Apple’s H2 chip is “adaptive” transparency feature, which automatically reduces the volume of loud noises when using transparency mode. It does an amazing job of letting sound in, but also blocking out loud noises, like a car horn. It’s so good that the second-gen AirPods Pro are the only pair of earbuds where I actually use the transparency mode in earnest.

Onboard volume controls are a welcome addition 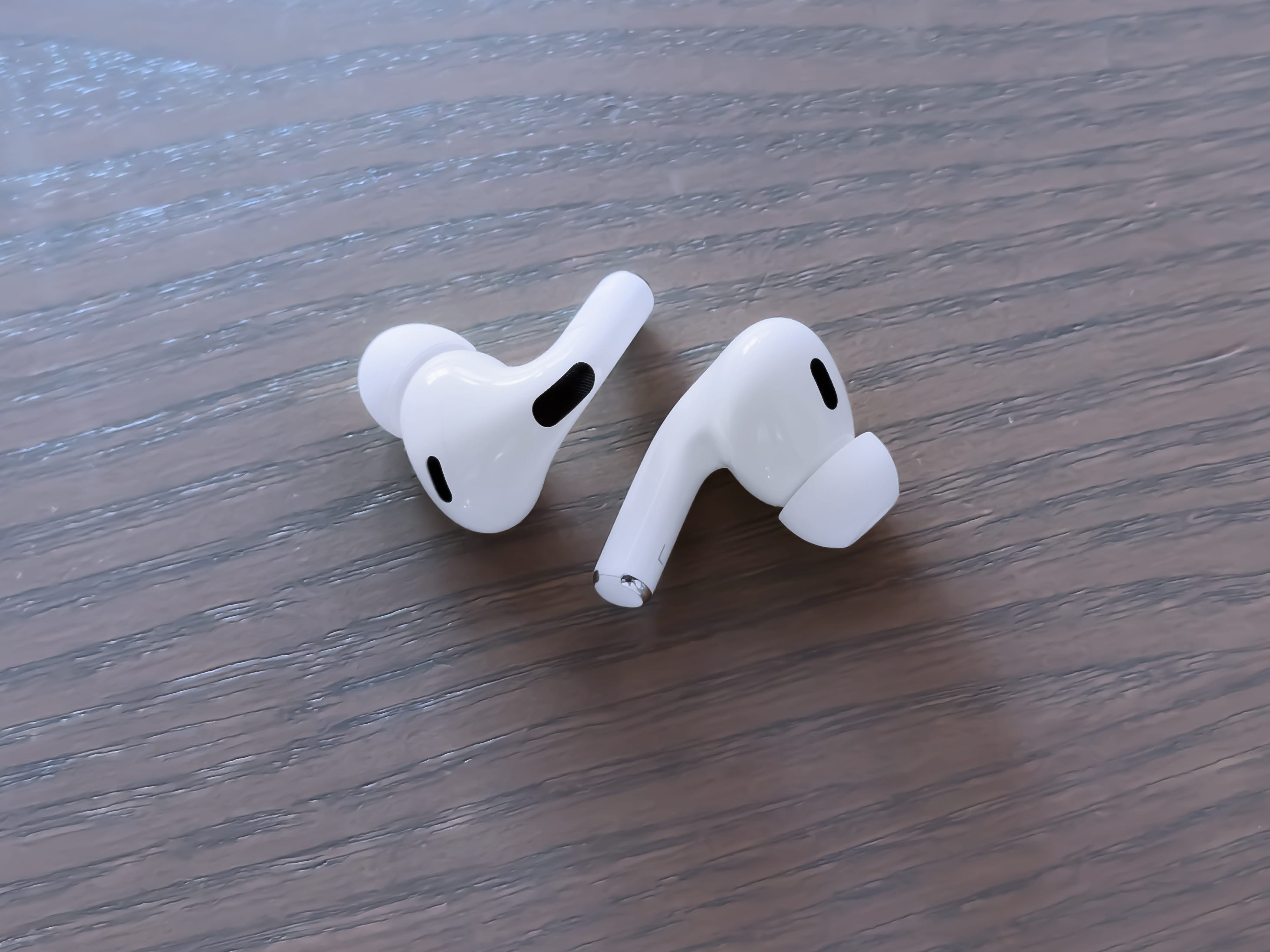 The original AirPods Pro came with pressure-sensitive controls for media playback controls and switching between noise cancellation or transparency modes, but they were notably lacking volume controls.

Apple fixed that with the second-gen AirPods Pro by adding touch sensors that let you swipe up or down the stems to adjust volume. No more having to reach for your phone to adjust the volume.

Despite the short stems, it’s surprisingly easy and intuitive to swipe up or down: Act like you’re pinching the stems with your thumb and index finger, and simply swipe with your index finger.

Should you buy it? 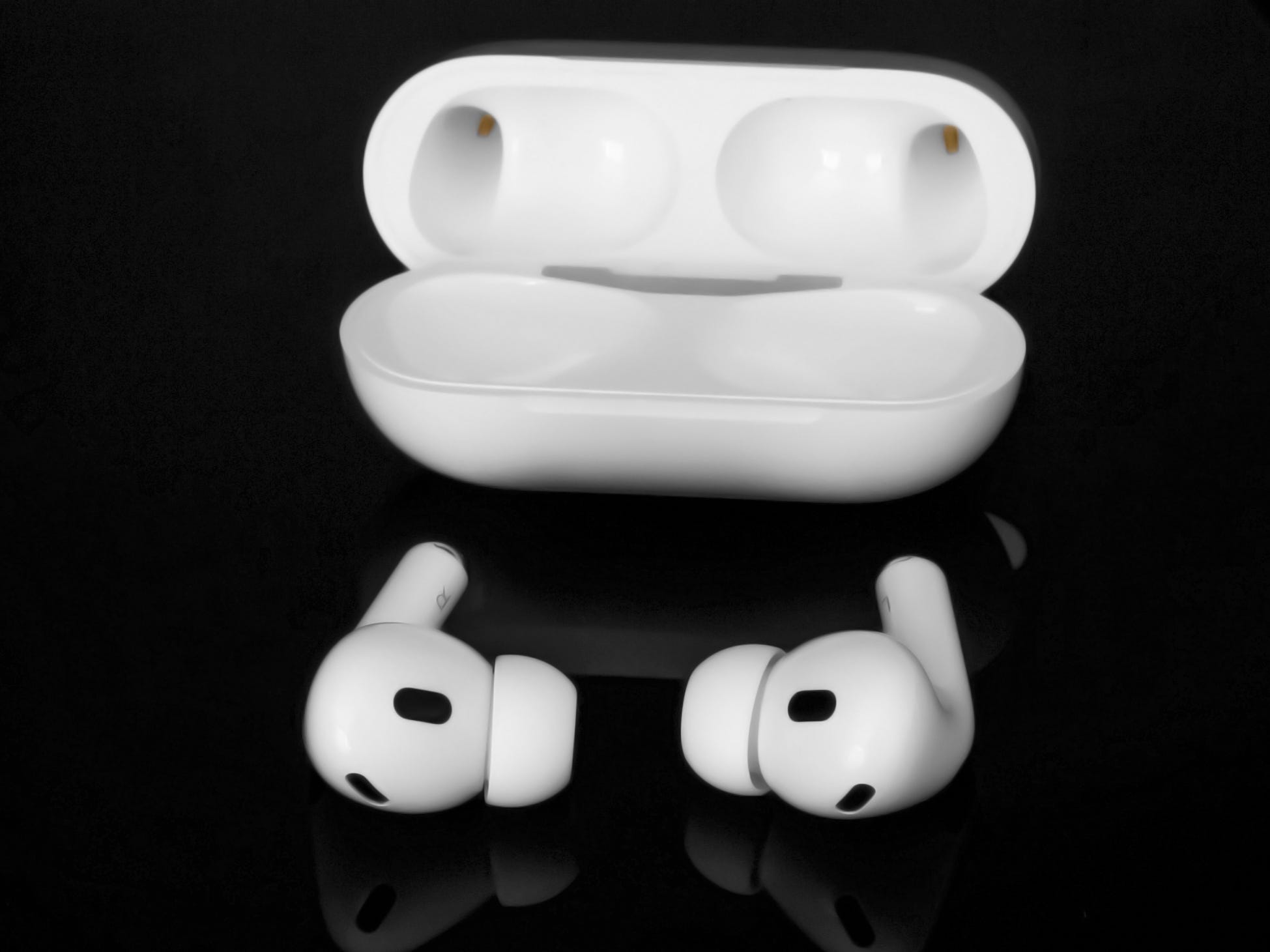 The second-gen AirPods Pro absolutely come recommended for the proverbial “most people,” at least those willing to spend over $200 for premium wireless earbuds, and especially those entrenched in the Apple ecosystem with multiple Apple devices.

Alongside the seamless pairing and switching between iOS devices, the second-gen AirPods Pro are a no-brainer for Apple loyalists with features like Precision Finding, as well as finer controls and options in the AirPods settings, which aren’t available on other platforms. Even if you own a pair of the original AirPods Pro, you’ll notice a big difference.

However, the AirPods Pro aren’t necessarily the only option out there. If you don’t own an iPhone, I’d still recommend looking into Sony’s WF-1000XM4, Jabra’s Elite 85T, or the Bose QC Earbuds II.