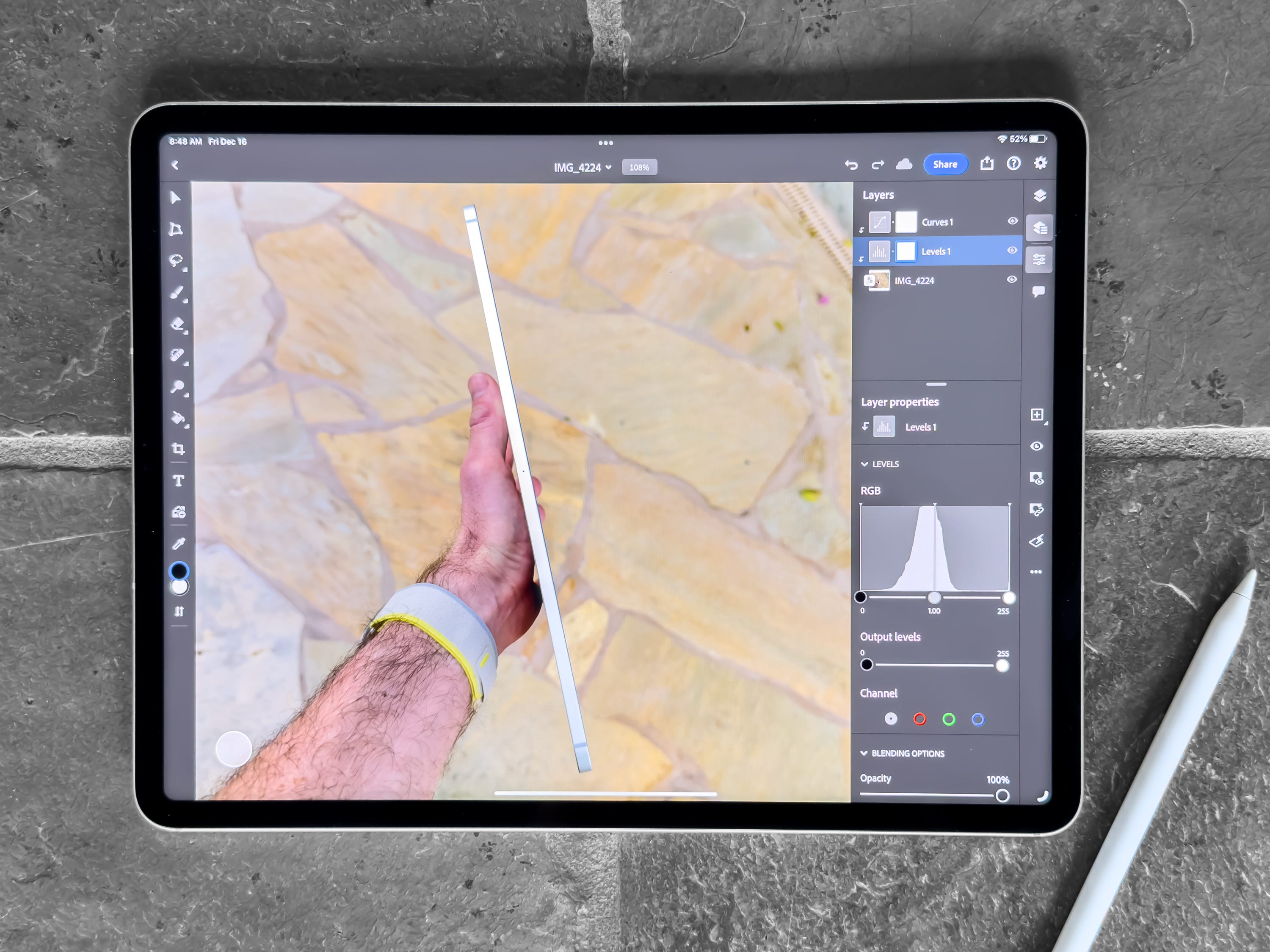 While Apple took the opportunity to completely redesign the basic iPad in 2022, the company chose not to rock the boat with the iPad Pro series. Instead, Apple upgraded both iPad Pro’s internal specs, with the 11-inch iPad Pro starting at $799 and the 12.9-inch version selling for $1099.

What the new iPad Pro lacks in any major design upgrades (it looks identical to the 2021 iPad Pro), it makes up for in more power. Apple swapped the M1 processor for the M2, making it the most powerful and responsive iPad in the entire lineup.

The 2022 iPad Pro offers a familiar pro-level experience with premium features, including the new Hover mode for the second-gen Apple Pencil. For professionals who want the most capable iPad to date, it could be worth jumping on. But if you’re a casual user, you and your wallet might be better off looking at the 2021 Pro model.

More for the same, but still top of the line 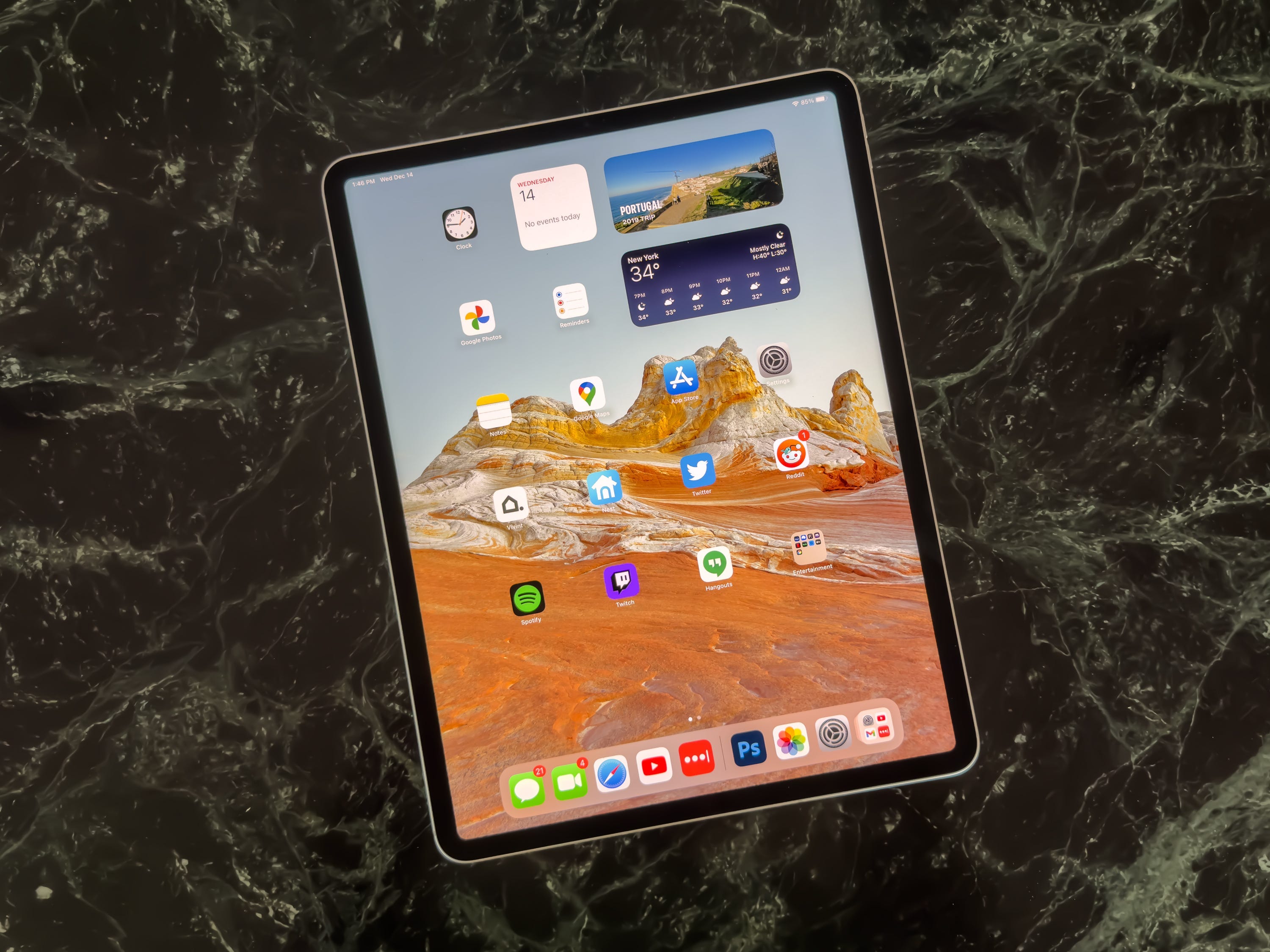 The 2022 iPad Pro is a level up above other iPad on almost all fronts.

The big storyline of the 2022 iPad Pro is more of the same hardware. It’s still available in two sizes, 11 and 12.9 inches, with the same display, cameras, storage options (128GB to 2TB), speakers, battery life, and colorways.

But even as Apple adopts a modern design language across all iPad models, including rounded display corners, uniform borders around the screen, flat edges, and a flat back, the iPad Pro still stands out for its incredibly thin design.

The iPad Pro’s uniform borders are slimmer than the iPad Air and 10th-gen iPad’s, which lends to a more premium look. The 11-inch model is lightweight at 1.03 pounds, whereas the 12.9-inch model sits quite heavily at 1.5 pounds, but that’s to be expected on such a large iPad.

Both iPad Pro models have the same displays as the 2021 Pro models. The 12.9-inch version still has a better screen than the 11-inch because it uses Apple’s Liquid Retina XDR display based on Mini-LED backlighting, which results in a more accurate, bright, and crisp visual experience. Each model includes Apple’s 120Hz high-refresh-rate ProMotion display, which produces smooth animations while swiping around iPadOS. 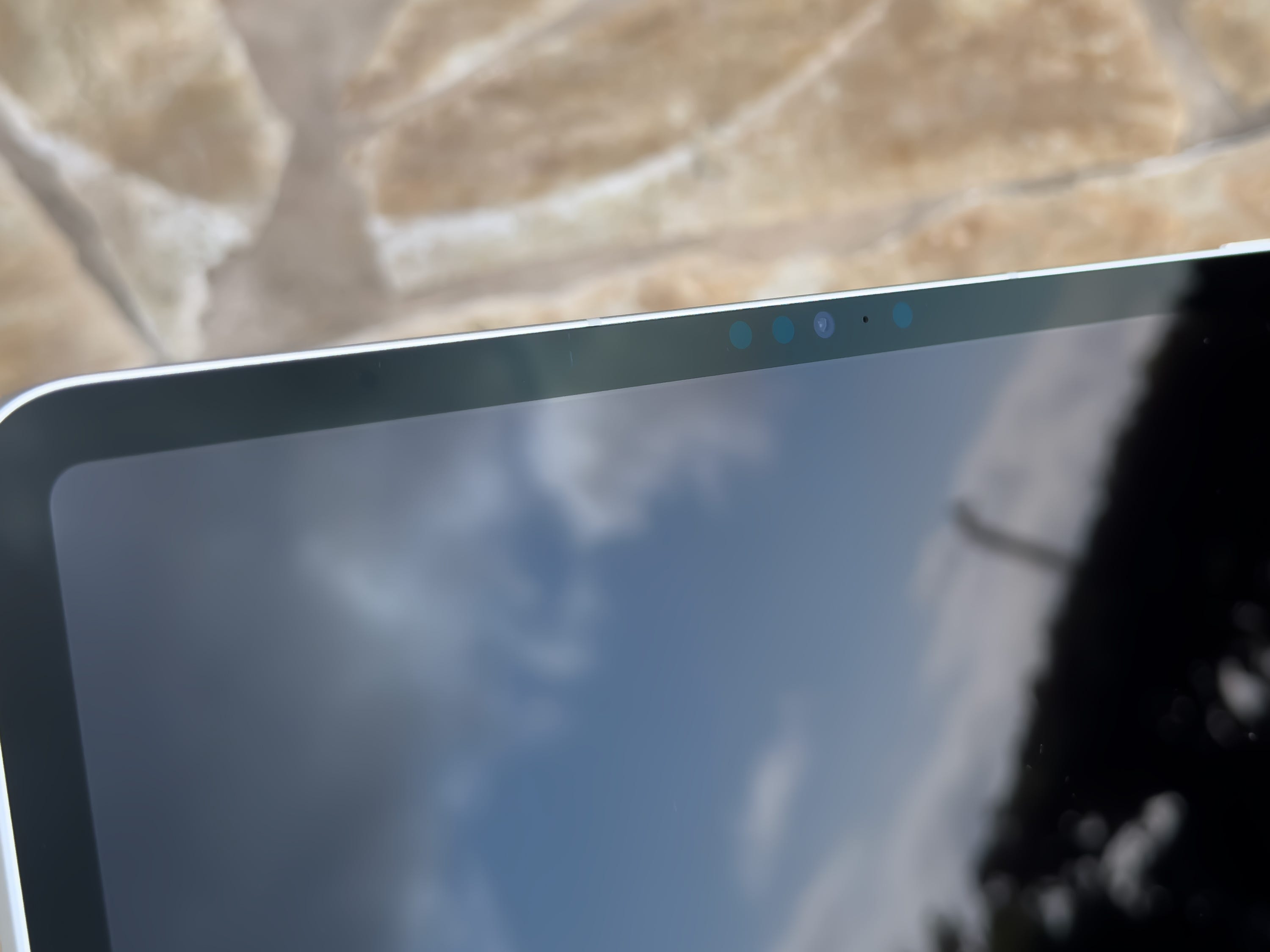 In terms of cameras, the 2022 iPad Pro has the same hardware as the 2021 and 2020 models: 12-megapixel wide and 10-megapixel ultra-wide cameras on the rear, and an ultra-wide 12-megapixel front-facing camera that supports Face ID.

Unfortunately, the iPad Pro still has its front-facing camera on the top edge of the screen, which means you’ll be awkwardly positioned on video calls if you’re using the tablet in landscape mode, which is highly likely, given the Pro works wonderfully with Apple’s Magic Keyboard.

While Center Stage — the feature that keeps you centered in the frame — can help with the bumbling side placement in landscape mode, we’re looking forward to the day when all iPads get a landscape-oriented camera, just like the basic iPad.

As for battery life, the iPad Pro’s is typical for an iPad — it can stream a video at full brightness for around 5.5 hours.

The biggest upgrade is the M2 chip, but it’s pros who will mostly benefit 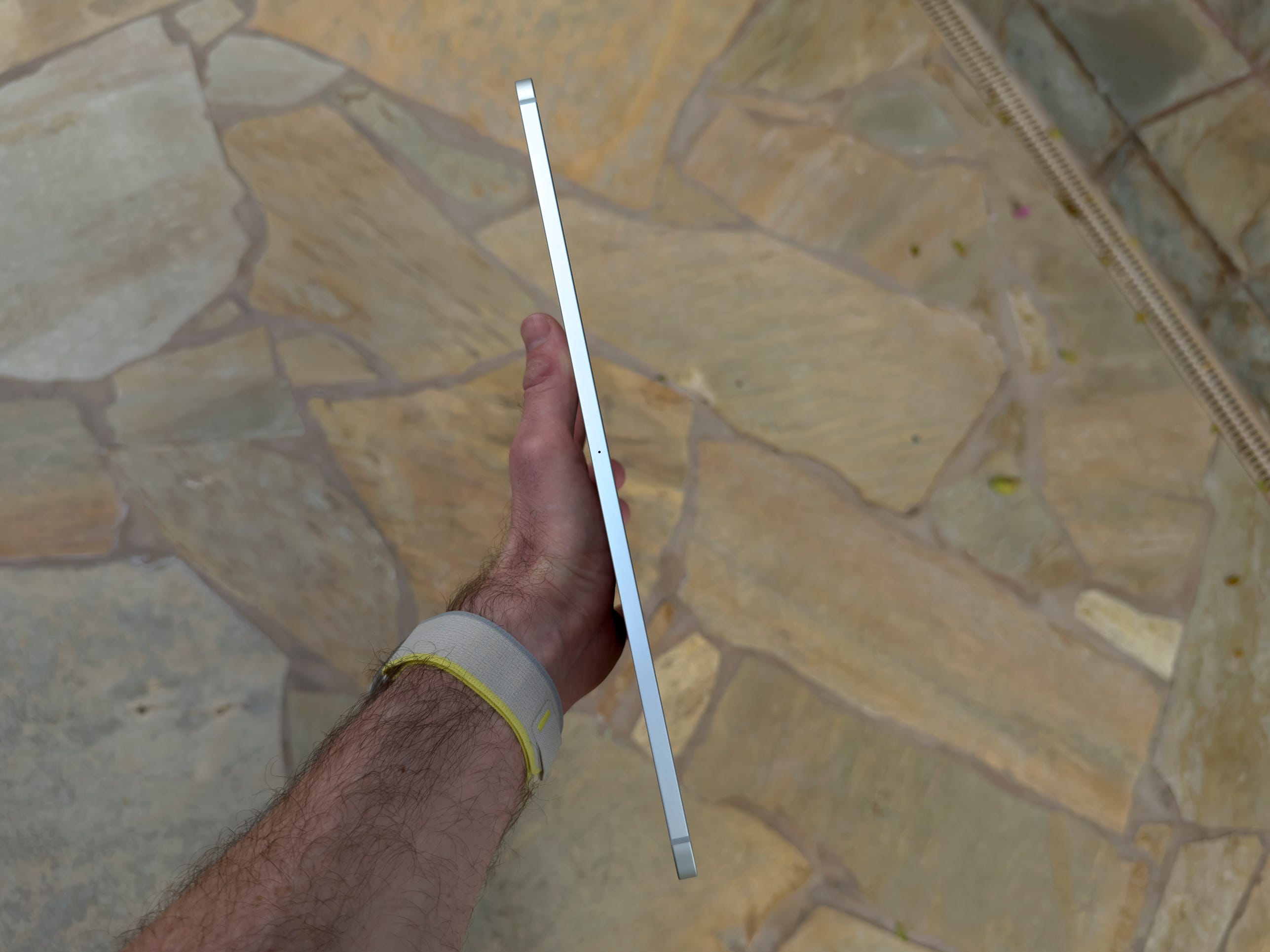 The 2022 iPad Pro brings computer-grade performance with its M2 processor, which is impressive for such a thin and light device.

The 2022 iPad Pro runs on Apple’s M2 chip, the same processor that powers the 2022 MacBook Air and 13-inch MacBook Pro. Save for a few minor details, the iPad Pro brings computer-grade power in a slimmer and lighter package.

The biggest question for professionals isn’t whether the 2022 iPad Pro is powerful enough — it’s the most powerful tablet you can buy. Instead, it’s whether the iPadOS versions of the apps they use are as comprehensive as the desktop versions.

Even though Apple claims the upgrade from M1 to M2 provides a 15-percent increase in speed and up to 35 percent faster graphics performance, the difference in casual day-to-day use is minimal. For those who stream videos and run basic apps like social media, games, web browsing, and so on, the iPad Pro’s power is excessive.

Professionals could justify the upgrade, but it’s a harder sell for most people. It could be worth it if you want to extend the lifespan of your purchase — the iPad Pro will likely outlive the 10th-gen iPad by a few years, and even the M1 iPad Air by a year or so. 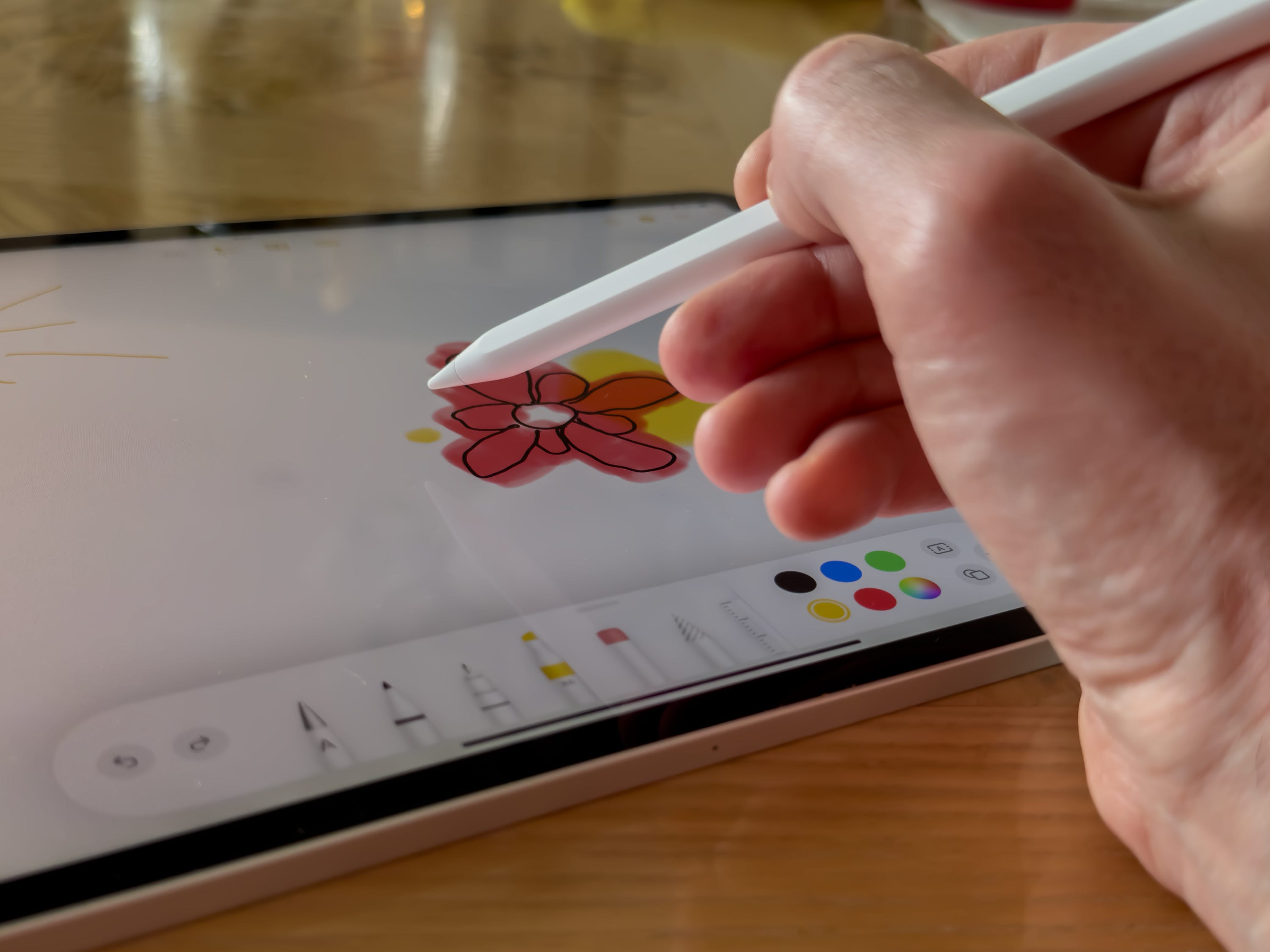 Apple’s new Hover feature for the second-generation Apple Pencil is powered by the M2 processor.

The iPad Pro’s M2 processor doesn’t just deliver power. It enables the new Hover feature with the second-gen Apple Pencil, making it the ultimate tool for note-takers, artists, or simply those who need more precision than a finger can offer.

Hover lets the iPad Pro detect the Pencil’s tip from 12mm above the screen, which gives you a preview of exactly where the tip will land. In the preview, you can see the size of marking you want to make, and even preview the blend of different colors.

It enhances the accuracy and precision that the Apple Pencil is already known for. If you’ve ever felt the Apple Pencil didn’t always land exactly where you wanted it to on an iPad’s screen, or whether you’ve picked the right brush size or the right color, Hover will help with that.

Third-party app developers can integrate Hover into their apps, too. Hovering above a project thumbnail in ProCreate, for example, will play a timeline of your process. You can also combine finger gestures on the screen with Hover to make adjustments, like changing the size of your brush.

In its current iteration, Hover is already useful, and it has the real potential to become utterly indispensable for digital professionals who use the Apple Pencil as more Hover features are added over time.

Impressive as it is, the 2022 iPad Pro is still not a laptop replacement 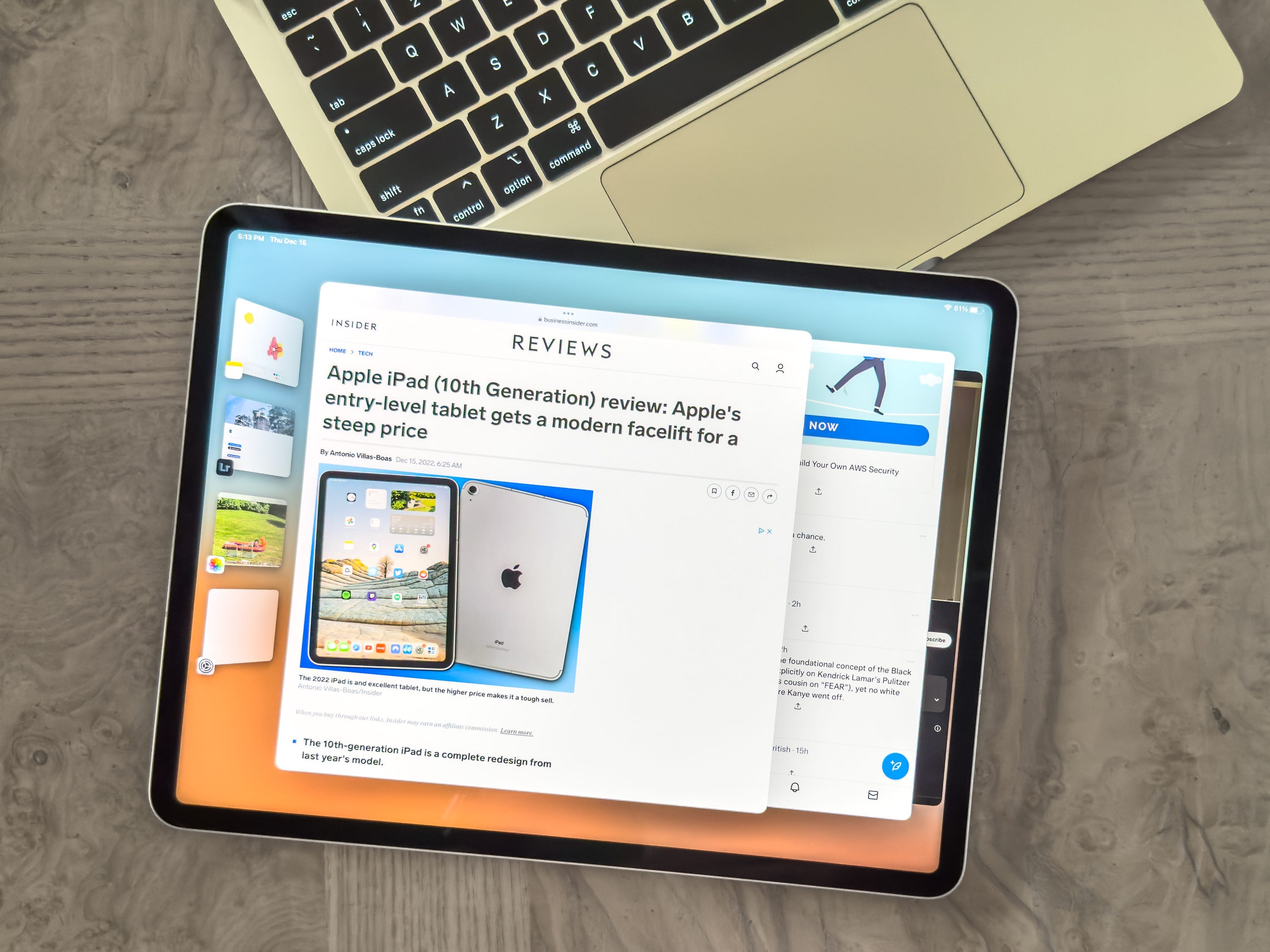 Despite the M2 processor, the 2022 iPad Pro isn’t a replacement for a laptop.

Even when used with Apple’s Magic Keyboard, which includes a trackpad and keyboard, the 2022 iPad Pro doesn’t offer the best of both the tablet and laptop worlds, nor is it a substitute for a laptop. It’s decidedly a tablet.

Before even considering iPadOS compared to macOS, using an iPad Pro as a laptop doesn’t make economic sense. The 12.9-inch iPad Pro is only $100 less than the M2 MacBook Air, and cases with keyboards and trackpads will bring the price even higher.

Not to mention that Apple’s Magic Keyboard combo with the 12.9-inch iPad Pro is much heavier and thicker than the M2 MacBook Air or 14-inch MacBook Pro. To top it off, Apple’s laptops have significantly better keyboards and trackpads than the Magic Keyboard.

As for iPadOS, it’s still very much a mobile operating system that simply doesn’t match the versatility of a full desktop operating system like macOS. Apple has three different features to help with multitasking, including Stage Manager, Slide View, and Split View — it desperately wants to be your laptop. Yet, multitasking on an iPad still isn’t as fluid or intuitive as it is on a laptop, and I find myself painfully yearning for my laptop while working.

Your camera and editing workstation in one device, maybe 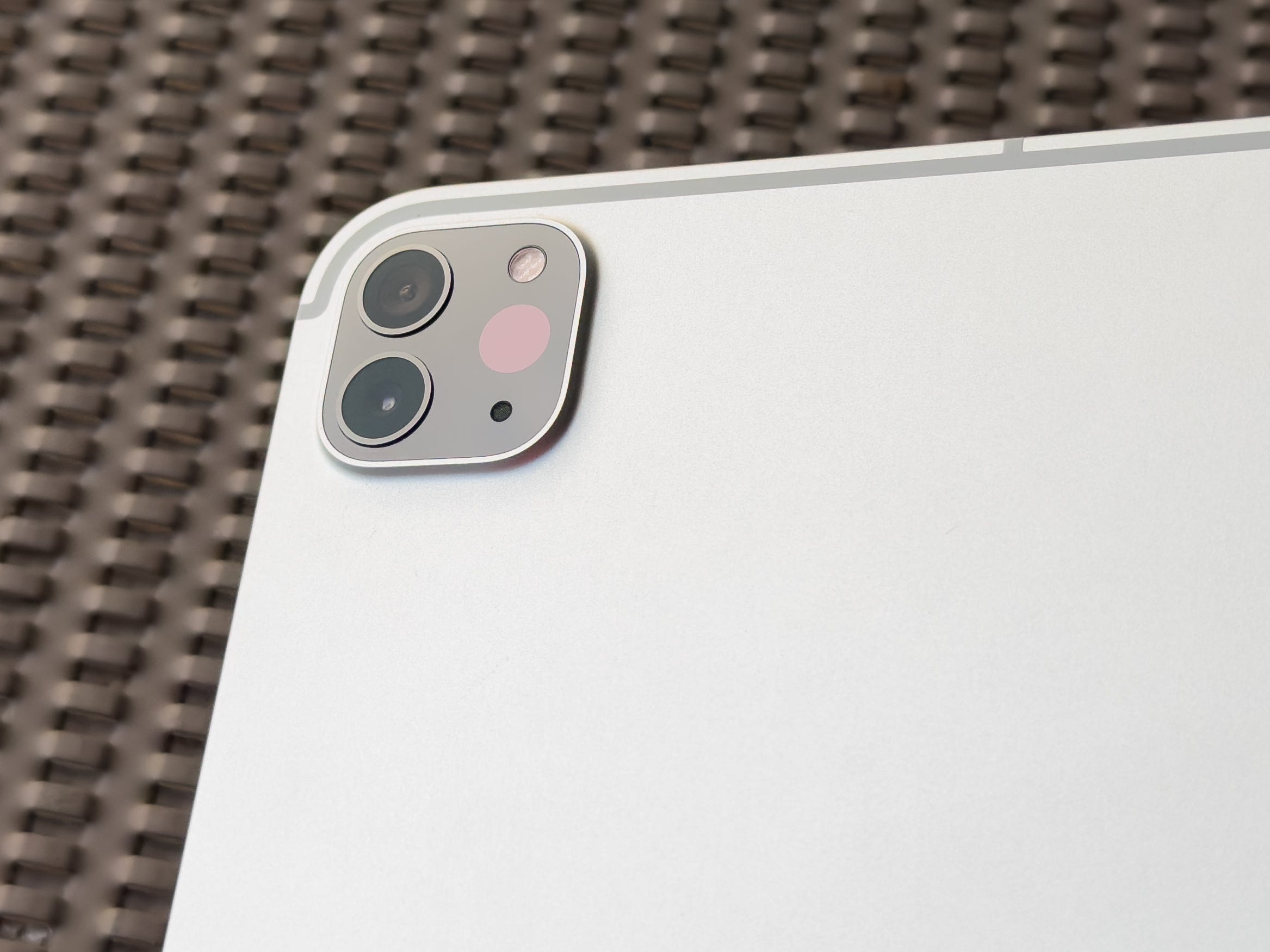 The 2022 iPad Pro has the best cameras out of any iPad model.

The iPad Pro differentiates itself from the rest of the iPad lineup with a dual-lens camera setup that includes a 10-megapixel ultra-wide and 12-megapixel main lens.

They take better photos and videos than any iPad, and you can edit them from the iPad Pro. They are also the only iPads to support Lidar sensors, a scanning technology that adds depth to photos — useful for applications like 3D and augmented reality.

However, a recent iPhone will still be a better option for taking photos and videos — the iPhone 14 Pro has superior video recording capabilities with Dolby Vision support, a 3x zoom lens, and Apple’s Cinematic Mode for focus transitions. And, you can easily transfer photos and videos taken with an iPhone to the iPad Pro with AirDrop.

With 4K resolution video recording at 60 fps, ProRes support, and video stabilization, the 2022 iPad Pro’s cameras might suffice for video hobbyists and some professionals for their video projects. The iPad Pro features stereo audio recording, too, but you’ll likely get better sound with a wireless microphone setup.

But video pros and photographers are more likely to use the iPad Pro as a mobile workstation to complement their external cameras, rather than the ones built into the tablet. While it may not be a suitable laptop replacement, the iPad Pro is ideal for these professionals who need something lightweight — their camera equipment will be plenty heavy — yet powerful enough to edit photos and video quickly. 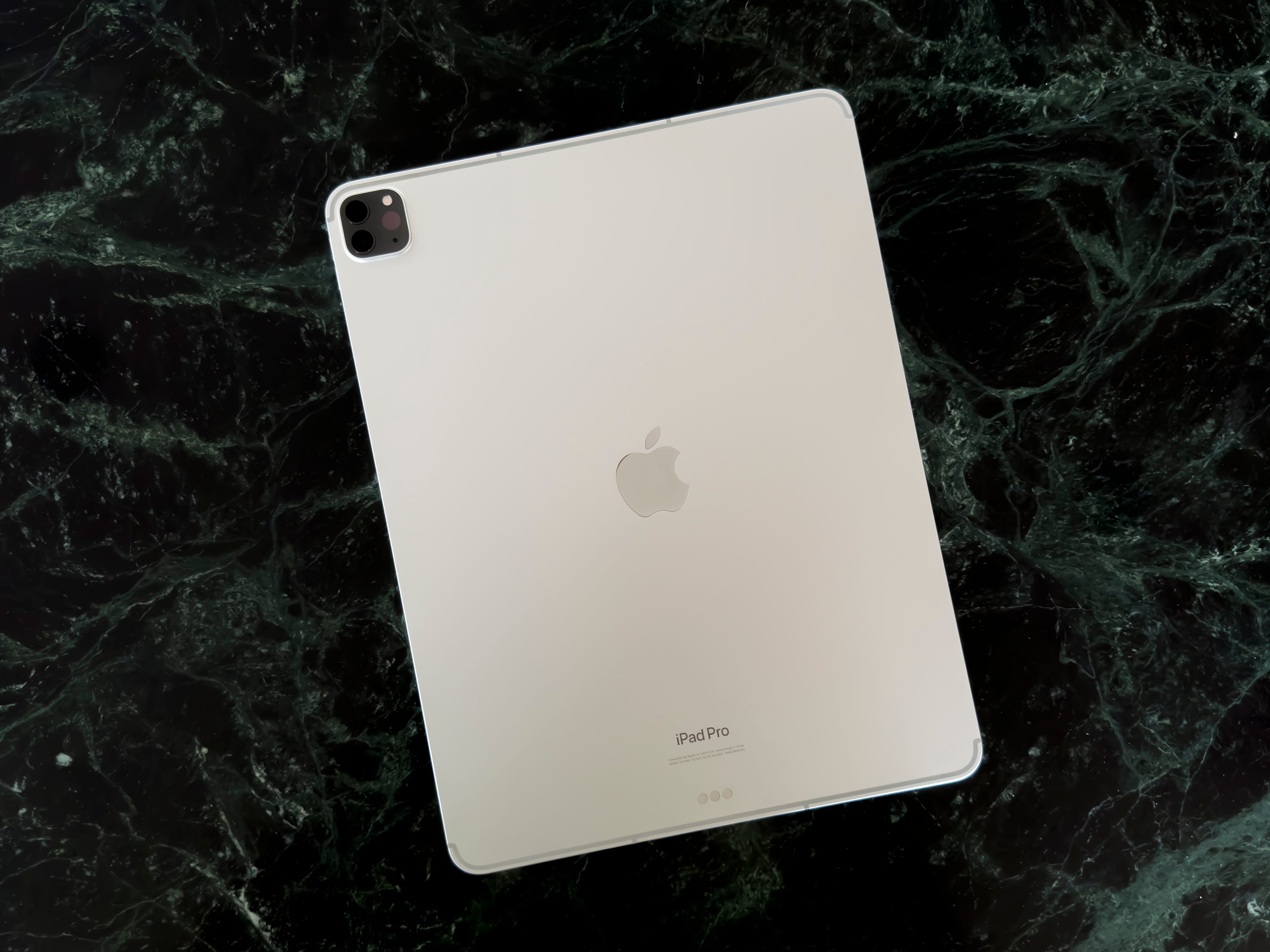 But the iPad Pro is no laptop replacement because iPad OS is limited in this area, even if you add a keyboard case and trackpad or mouse. If you need a thin and light workstation that offers a true computing experience, buy the M2 MacBook Air or 14-inch MacBook Pro.

As for casual video streamers who use basic apps, the iPad Pro will give you a few extra years of smooth and fast performance than the entry-level 10th-generation iPad — how many years exactly is hard to tell. And the ProMotion display sure is nice to have.

However, the 11-inch iPad Pro costs twice as much as the 10th-generation iPad; it is also $200 more than the iPad Air. I’d recommend either of those two models for more casual users before recommending the iPad Pro.