As Arizona governor Doug Ducey’s term draws to a close, he’s rushing to cement his legacy: a bunch of battered, rusty shipping containers. Since Oct. 24, crews have double-stacked 900 of the metal boxes at the Arizona-Mexico border to create a 17 ft.-high barrier, with sheet metal welded between them. The aim is to cover a 10 mile stretch, with up to 3,000 containers, before Ducey’s Jan. 5 departure from office. The Republican governor says the project is needed to fill a gap in the 450-mile border wall built during the Trump Administration to keep out migrants. But advocates say the area, in the remote San Rafael Valley, isn’t even regularly used by migrants.

On Wednesday, the U.S. Department of Justice filed a lawsuit against Arizona in the state’s U.S. district court. It says that the construction, which is taking place on federal land without permission from federal agencies, is unlawful, and calls for the court to compel Arizona to remove the containers.

The fiercest opposition to Ducey’s project, however, is coming from environmental activists, who have used their bodies to halt construction over the past week. The reason? This corner of southwestern Arizona is one of the most wildlife-rich parts of the U.S., home to mountain lions, javelinas, black bears, and visiting jaguars and ocelots. All these animals roam back and forth across the U.S.-Mexico border to find food, water, and mates. Researchers report that wildlife cameras set up near the container wall have already captured coyotes and foxes unsuccessfully trying to cross it. Conservation advocates say the wall is a threat to those species’ survival and reproduction.

Read More: Giant Rodents ‘Invaded’ a Wealthy Gated Community. What Happened Next is a Lesson for Cities in the Climate Change Era

Climate change will turbo-charge that threat. As global warming alters conditions in animals’ existing habitats, scientists say the biggest mass migration of animals since the Ice Age is getting underway. It will often be blocked by human borders, thanks to a worldwide frenzy of wall-building over the last few decades. A 2021 study by U.K.-based ecologists found that in a high emissions scenario, 16% of non-flying mammals would see more than half of their climatic niche—locations with conditions in which they can survive—move beyond border barriers they can’t cross by 2070. The U.S.-Mexico wall is especially problematic: because of its position, cutting east-west across a massive wildlife region, the researchers wrote, it “may be one of the worst international borders on the planet along which to build such a wall.” 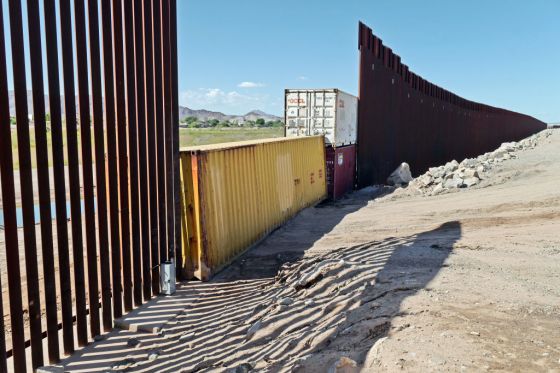 Photo by Nick Ut—Getty ImagesShipping containers block a void in the wall as that prevent migrants attempting to cross in to the U.S. from Mexico at the border Aug. 19, 2022 in San Luis, Arizona.

In Arizona, there are already signs of climatic shifts that will affect local animal populations, says Jesse Alston, an assistant professor at the University of Arizona’s School of Natural Resources and the Environment, who studies animal movements . The Southwest’s rainy seasons are becoming less reliable, which will likely force whitetail and mule deer to move to new areas to find food and water. Vegetation is also changing: low-lying grasslands, preferred by pronghorns, are being taken over by shrubby plants. Further upland in the border region’s small mountain ranges, oak forests home to black bears may soon turn into grasslands. “A lot of the animals around here are specialists for certain types of habitats,” Alston says. “When the habitat changes, they don’t really have the ability to live there.”

A version of this story first appeared in the Climate is Everything newsletter. To sign up, click here.

Things may all come to a head for one of the region’s most charismatic animals. Northern Mexico is home to a breeding population of jaguars, several of whom have been sighted roaming into Arizona in recent years. A study published last year in conservation journal Oryx found that climate change and habitat loss south of the border could push the cats northward more permanently in future—much of Arizona and New Mexico is prime jaguar habitat, the researchers claim. But environmentalists say such movement would be blocked by the container wall.

For Arizona, there’s a chance it won’t come to that. Democratic governor-elect Katie Hobbs says she is still deciding whether the removal of containers would be a good use of public funds (getting them there is costing more than $100 million). The federal lawsuit, if successful, could force her hand.

Whatever she does, hundreds more miles of the U.S. border wall are likely to remain in place, with President Joe Biden having dismissed calls to tear it down. That will leave wildlife stuck between a wall and a climate-changed place.