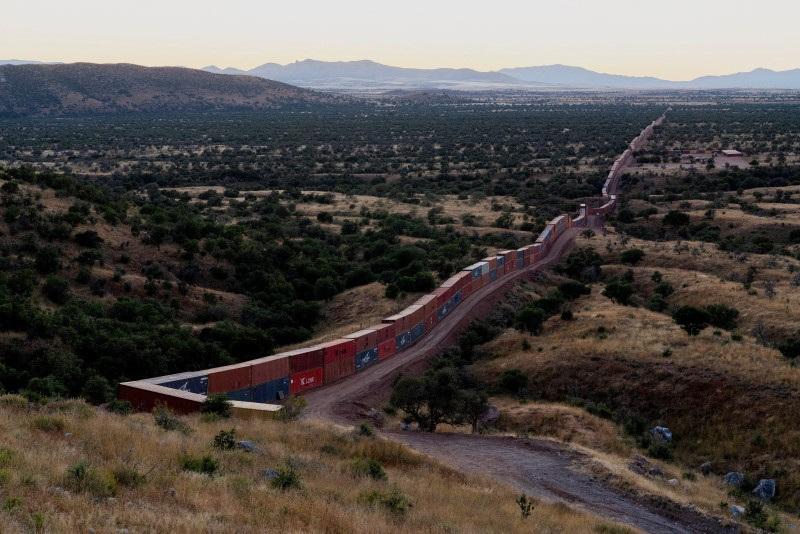 FILE PHOTO: A view of shipping containers from the border wall on the frontier with Mexico in Cochise County, Arizona, U.S. November 6, 2022. REUTERS/Thomas Machowicz

(Reuters) – Arizona will remove a line of shipping containers placed along the U.S.-Mexico border a week after the U.S. government filed a lawsuit alleging that the makeshift wall designed to deter migrants was illegally erected on federal lands.

Arizona will remove the containers and the equipment, materials and vehicles used to install them by early January, according to an agreement between state and federal authorities reached late on Wednesday and filed in the U.S. District Court for the District Of Arizona.

The two sides resolved the issue two weeks before Katie Hobbs, a Democrat who opposes the construction, is due to take over as governor.

The current Republican governor, Doug Ducey, signed an executive order in August directing a state agency to close the gaps along Arizona’s 370-mile (600-km) border with Mexico by double-stacking the shipping containers.

“Our border communities are being used as the entryway to the United States, overwhelming law enforcement, hospitals, nonprofits and residents,” Ducey had said when he signed the executive order.

In its lawsuit, the Justice Department argued the containers were illegally constructed on federal lands.

Ducey had previously said he had the right to defend the state of Arizona and protect its citizens. His office had described the rise in the number of migrant crossings as “ominous,” threatening to overwhelm border communities.

The work of placing up to 3,000 containers at a cost of about $95 million was about a third complete.