Wintertime is peace time, or so goes the conventional wisdom in the South Caucasus. This thinking is being challenged this week: On Tuesday, in cold temperatures, Azerbaijan reportedly suspended again the gas supply to Nagorno-Karabakh, a disputed Armenian-populated region, amid an already ongoing blockade. With E.U. monitors set to depart on Sunday the borderlands that Azerbaijan attacked three months ago, the populations of Nagorno-Karabakh and all of Armenia are left pondering the next moves of Azerbaijan’s dynastic president Ilham Aliyev.

But if Aliyev does go further, it wouldn’t be the area’s first winter war—and the other exception to that historical rule is an instructive one. Though most major hostilities in this part of the world over the past century or so have happened outside the coldest months, there is one notable exception: During World War I, at the Battle of Sarikamish, the two crumbling empires of Ottoman Turkey and Tsarist Russia wrestled for control of historical Armenia, which had been divided between the two. But before the battle could even start, tens of thousands of underequipped Ottoman soldiers died by freezing.

In recent years, the memory of Sarikamish has been revived in official circles in Turkey and Azerbaijan alike. Two years ago, when Turkish leader Recep Tayyip Erdogan joined his “brother Aliyev” to celebrate Azerbaijan’s victory over Armenians in a fall 2020 attack on Nagorno-Karabakh, Erdogan proudly proclaimed that “the soul of… Enver Pasha… will rejoice.” He was referring to the WWI-era Ottoman War Minister who provided Turkish support for establishing and expanding Azerbaijan—and who, earlier, was the blunderer-in-chief of Sarikamish.

At bitter-cold Sarikamish, in late 1914-early 1915, Enver was thankful to Ottoman Armenian soldiers who gave their lives in vain to battle Russia. But when he returned to the Ottoman capital of Constantinople after that loss, he had a change of heart. Instead of admitting his incompetence in improperly dressing and housing soldiers or in dismissing German advisors’ opposition to attacking Russian troops in harsh winter conditions, Enver blamed his blunder on Armenians who had volunteered to join the Russian forces.

Read more: Inside Azerbaijan’s Grand Plan To Make the Disputed City of Shusha a Cultural Capital

The collective punishment that followed was not just a temper tantrum. Enver dreamed of a racially pure polity of Turkic-speaking peoples, in which Armenians, whom he now called traitors, were the main hurdle. Not all Ottoman leaders were Pan-Turkists. But at a time when the Ottomans kept losing colonies, Armenians were the last and largest remaining Christian population in the region: an obstacle to creating a Turkey for Turks. Emptied Armenian homes and farmlands would also solve an urgent need, serving as accommodation for Muslim refugees who had just fled the Balkans.

The loss at Sarikamish, then, was an opportunity not to be missed. In 1915 alone, well over one million Armenians—the overwhelming majority of whom were loyal Ottoman citizens despite centuries of occupation, oppression, and overtaxation—were violently erased from their ancient homeland in what is now eastern Turkey. The massacres spilled outside the Ottoman borders, including when, later in WWI, Enver’s Army of Islam reached Baku, the capital of current Azerbaijan.

The Pan-Turkist dreams did not materialize. But some of Enver’s fears did. His obsession with treason took an ironic turn when he fled the defeated Ottoman Empire (which briefly acknowledged its crimes against Armenians by sentencing Enver—among other architects of the Armenian Genocide—to death), then fled Germany, to fight for and then against the Soviets. The u-turn self-fulfilled his paranoia: While in Central Asia, Enver and his rebels were destroyed by a Nagorno-Karabakh-born commander. It was not until the USSR’s collapse that the Turkish government repatriated his remains, giving Enver a hero’s reburial in 1996. 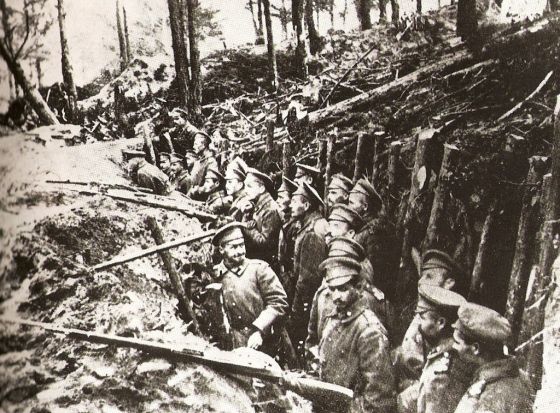 Universal Images Group via GettyRussian trenches in the forests of Sarikamish, during campaign in Armenia in World War I.

Enver’s dream of physically connecting Turkey and Azerbaijan was unrealized, but the idea was not extinguished. In mid-September of 2022, Aliyev’s forces shelled dozens of towns in eastern Armenia and left evidence of numerous atrocities committed in the process of the invasion. The goal? A sovereign corridor splitting southern Armenia so that Turkey and Azerbaijan can have a continuous land border. Armenia’s offer to mutually unblock all transportation routes was rejected. Azerbaijan’s attack didn’t go unnoticed. Washington, despite the U.S. traditionally serving as a mediator of the conflict, shifted—if briefly—its rhetoric. Last month, USAID allocated $2 million dollars for a “transportation study in Armenia… to bolster peace,” an implicit U.S. opposition to Erdogan-Aliyev’s border dreams.

Erdogan and Aliyev weren’t always on the same page when it came to Armenians. Both came to power almost at the same time, in the early 2000s, but with different approaches to history. In 2005, Erdogan chose cultural diplomacy to polish his international image by restoring a 10th century Armenian church. Some hoped that Erdogan might even recognize the Armenian Genocide. Aliyev took a completely different path, wiping out indigenous Armenian culture in Azerbaijan’s territory by the destruction of monuments—remnants of a history that his regime now insists never existed to begin with.

But after surviving an attempted coup in 2016, Erdogan’s own obsession with power and history grew. He started frequenting outlying regions, including close to Armenia, to commemorate battles. At one of the commemorations, in 2018, Erdogan mourned the WWI Ottoman Turkish losses, declaring—for the first time—that his own grandfather had frozen at Sarikamish.

These days, Erdogan and Aliyev are even more hyped up about history for a reason: 2023 may be the most decisive year of their political futures. Aliyev appears to be readying for succession. His wife, who is the First Vice President, will automatically become president if he steps down or dies, thanks to a constitutional referendum in 2016 that also extended the presidential term limit, allowed for early elections, and lowered the age of eligibility for the office, such that their son, who has become more visible in recent years, could now run. Youthful Heydar has been showing up for photo-ops in military attire, despite skipping service in the 2020 war.

To solidify the narrative that only an Aliyev-led Azerbaijan can be secure and victorious, the senior Aliyev seems bent on delivering a “peace deal” by Jan. 1, in which Armenia would officially consent to Nagorno-Karabakh being part of Azerbaijan and would cede a sovereign corridor, which would accomplish Enver’s Pan-Turkist dream of connecting Turkey and Azerbaijan via uninterrupted land.

Absent a diplomatic victory, Aliyev may well seek a military one, by forcefully opening a Turkey-Azerbaijan “corridor” or permanently shutting off Nagorno-Karabakh’s sole connection with the rest of the world, which is currently blockaded by his regime. The year 2023 has already been designated as “The Year of Heydar Aliyev” in Azerbaijan to honor the founder of the Aliyev dynasty, who would have turned 100—a perfect time to transition the presidency to the namesake grandson.

And Erdogan is preparing for an election in June. He has been long hoping to make the year 2023—the centennial anniversary of Ataturk’s founding of the Turkish Republic on the ashes of the Armenian Genocide—an extra glorious one in Turkish history. He has already said he wants to renegotiate the post-WWI Lausanne Treaty, a Turkish diplomatic victory by 1923 standards that shelved previous commitments to ceding lands. He may not get a Lausanne redo, but a winter punishment for Armenians by his “brother Aliyev”—a chance to get a different outcome than at Sarikamish—might do the trick in energizing Erdogan’s nationalist coalition.

All of this makes this winter an extra dangerous one for Armenians. In addition to this week’s suspension of Nagorno-Karabakh’s gas supply and the ongoing blockade, satellite images suggest a military build-up around Armenia’s internationally recognized borders. Aliyev must know that his opportunities for regional opportunism are shrinking, and would do so even more if his key enabler, Erdogan, loses the election.

Despite continuing negotiations, Armenia appears to be expecting a war any moment. But it, and stability-seeking powers, should not let their guard down just because it’s winter.

After all, following the late 2020 war, when Erdogan’s and Aliyev’s forces held “the most comprehensive” winter military drill, close to the borders of Armenia, they tested exactly 218 different types of weapons for a reason: to match the artillery count at Sarikamish.

Simon Maghakyan is a visiting scholar at Tufts University and a Ph.D. student in Heritage Crime at Cranfield University. He writes and speaks on post-Soviet memory politics and cultural erasure, and facilitates global conversations on protecting Armenian heritage