Avatar: The Way of Water is already earning rave reviews from critics ahead of its Dec. 16 release. The sequel looks to be the sort of original epic that few directors beyond James Cameron get the budget to create these days. It took 13 years for Cameron to make the sequel; he had to, among other things, invent new motion capture technology that he could use to film underwater.

In the interim, you may have forgotten who Jake Sully is or what he’s doing on the moon of Pandora in the first place. If you need to refresh your memory before The Way of Water, you can stream the original Avatar on Disney+. Or you can just catch up with the plot here.

What is the premise of Avatar?

Critics of Avatar might call it a Pocahontas rip-off, and they’re not totally wrong. It’s a movie about the ills of colonialism and the importance of environmentalism told through the eyes of a soldier who falls in love with the moon he invades—and one of its native warriors. Let’s be honest, the plot of Avatar wasn’t the reason you bought a ticket. The visual spectacle of Pandora is what propelled the film to become the highest grossing movie of all time.

What happens in Avatar?

Avatar is set in the 22nd century. Humans have depleted Earth’s resources, a future we’re hurtling toward in real life. Mankind has decided to colonize a moon far out in space called Pandora.

Pandora is rich with something called unobtanium (yes, really). It is also home to tall blue aliens known as the Na’vi. The Na’vi, unlike humans, care deeply about their home world, and many of their rituals revolve around its preservation and working within the Pandora ecosystem. At night, everything glows, and it looks very cool.

The earthlings are taking a two-pronged approach to dealing with the native Na’vi. The scientists, led by Sigourney Weaver’s Grace, want to learn to communicate and cooperate with them. Several scientists have trained for years to operate genetically engineered Na’vi forms, a.k.a. avatars, to walk around Pandora without oxygen masks while their human bodies hang out on a remote ship. Meanwhile, a company called R.D.A. (Resources Development Administration) just wants to blow everything up to get the oil—er, I mean, unobtanium. (Cue flashbacks to the Bush administration.) Parker Selfridge (Giovanni Ribisi, doing the most) and Col. Miles Quaritch (Stephen Lang, doing even more) lead that effort.

Our main character is Jake Sully (Sam Worthington), an ex-marine who has been paralyzed and uses a wheel chair. His identical twin was supposed to operate one of the Avatar bodies, but dies unexpectedly. R.D.A. spent so much money engineering an avatar for Jake’s brother that they offer Jake a handsome sum to take his place. The scientists are all miffed that a military guy without any scientific training has entered their ranks.

Quaritch promises Jake that if Jake spies on the scientists and helps the military’s interests, he’ll be given the surgery he needs to walk again. Jake agrees but soon falls hard for a Na’vi warrior named Neytiri (Zoe Saldaña) while exploring the forests of Pandora in his Na’vi body. Though Neytiri is betrothed to another Na’vi, she shows Jake how to do cool Na’vi things like jumping on giant leaves and connecting his long braid of hair to the animal he’s riding on so they can be mind-melded…or something. It’s implied later that the Na’vi also connect their braids to, umm, do the deed. So puzzle through that at your leisure.

Anyway, Quaritch gets sick of waiting. He destroys a big tree that serves as home to the Na’vi people in his mining expedition. It’s a bloodbath: Grace dies; Neytiri’s father, the leader of the Na’vi, dies. Jake earns the trust of the Na’vi by jumping on a big bird that no one else has been able to jump on. Does this edge into a white savior narrative? Absolutely.

A second big fight takes place between the humans and Na’vi. Another bloodbath ensues. A military pilot helping Jake played by Michelle Rodriguez dies. In the end, Quaritch is about to kill Jake when Neytiri kills Quaritch. (You can accuse James Cameron of many things, but his female action heroes always get badass moments. Ripley and Sarah Connor, looking at you two icons!) Jake becomes an avatar permanently through…nature magic. Don’t think about it too much. The end.

Why were the visuals in Avatar such a big deal?

If you happened to catch the re-release of Avatar in theaters this year, you might have noticed the movie looks better than anything made in the last decade despite being 13 years old. Cameron uses very time-consuming, expensive motion capture technology to catch every small gesture and twitch of his actors’ bodies. Plus, the film actually makes good use of truly immersive and thoughtful 3-D. The viewer feels immersed rather than assaulted by random 3-D flying objects.

The tech was also, crucially, used in service of the story. Cameron is a master of worldbuilding, and unlike most of the planets produced in various Star Wars and Marvel sequels, Pandora feels like a lived-in space with its own ecosystem, flora and fauna, and a fully-realized look. 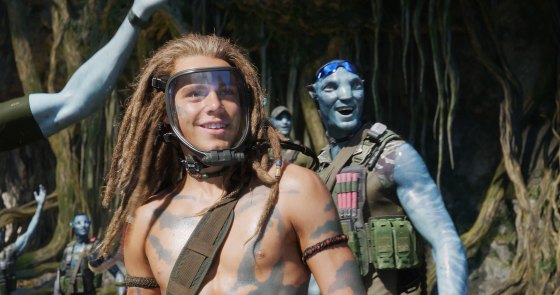 20th Century StudiosJack Champion as Spider in Avatar: The Way of Water

What is the sequel about?

Set almost 15 years after the original, Jake and Neytiri are now the parents of a brood of preteen and teen children, including a teen played by Sigourney Weaver (in a bold if somewhat confusing casting decision). As the title might suggest, The Way of Water introduces an oceanic tribe of Na’vi called the Metkayina, and much of the action takes place, well, underwater.

Now that Jake and Neytiri are parents, they can’t just jump off cliffs and dangle off helicopters. They need to be a bit more circumspect: The Way of Water is a movie about parenthood and responsibility.

Lang is back even though his character died in the first movie. Apparently the R.D.A. has created a new avatar program that permanently transfers human minds to Na’vi bodies, and that’s exactly what they did with Quaritch’s maniacal brain. Ribisi is back too as the still-alive Parker Selfridge.

Who else is in the cast?

When are the other Avatar movies coming out?

Home » Audio Sources - Full Text Articles » What to Remember About Avatar Before Watching Avatar: The Way of Water
a