In a moment of heedless generosity, you could almost commend Damien Chazelle for caring enough about the last days of the silent film era to make a movie about it—if he showed any evidence of caring at all. Babylon isn’t a film made with love, or even with any degree of exactitude; it pretends to be a movie about “loving movies,” but more than anything else, it seeks to reflect glory on its creator. It advertises its alleged extravagance and glamour, loud and hard, but only comes off looking tinny and cheap. Its central character is a narcissist with no complexity, no interior contradictions—not even Margot Robbie, among the most appealing performers we’ve got, can animate her. Writer-director Chazelle thinks he’s created a vision of 1920s Hollywood, but no matter how much research he may have done, he hasn’t listened at all to what these faces, these stories, have told him. He treats people of this lost era like primitive creatures who just didn’t know any better. He’s not capturing the past; he’s only condescending to it.

Chazelle is an ambitious filmmaker, and Babylon is an ambitious picture. It opens in 1926, as silent films and their stars were still going strong, and ends in the early 1930s, when many of the old players found themselves left behind by the talkies, a span of roughly five years that may as well have been an eon. That’s a good subject, as it was when Stanley Donen, Gene Kelly, Betty Comden and Adolph Green mined it for Singin’ in the Rain, a movie Chazelle references frequently. But Babylon is less a shaped film than a big pile of movie. (It’s more than three hours long—three aggressively raucous, cheaply poignant hours.) You know what you’re in for during the movie’s first scene: an elephant being brought in for a Hollywood mogul’s big shindig squirts projectile poop right into the camera lens, like a kickoff toast: Here’s crap in your eye! The point, presumably, is that these early Hollywood types weren’t classy, well-mannered people; they were selfish, gauche and needlessly extravagant. We’re invited to party with them and look down on them at the same time—the best of both worlds.

Our guide to this seductive universe of debauchery is an outsider who desperately wants in, the movie’s most sympathetic character by design: Manny Torres (Diego Calva) is a longtime Los Angeleno who, like everybody else, wants to break into the business. He knows he’s got to start at the bottom, even if that means wrangling incontinent elephants. He leads us into the mogul’s mansion, where we witness all manner of semi-naked boys and girlies dancing with abandon and doing purportedly unspeakable things to one another, even though it’s all really rather decorous (and, for what it’s worth, numbingly straight, aside from some ho-hum girl-on-girl action). Streamers fly; champagne zings through the air; a jazz band of cool-looking Black musicians tootles the brassy, thumping notes of Justin Hurwitz’s feverish, droningly repetitive score. Chazelle and his cinematographer Linus Sandgren draw us into this party with one long, swooping take. This is where your date, if you’re with the wrong one, nudges you and says, “Look, this is a single take!” Say what you will about Chazelle and Sandgren, they’re fluent in the love language of the film bro. 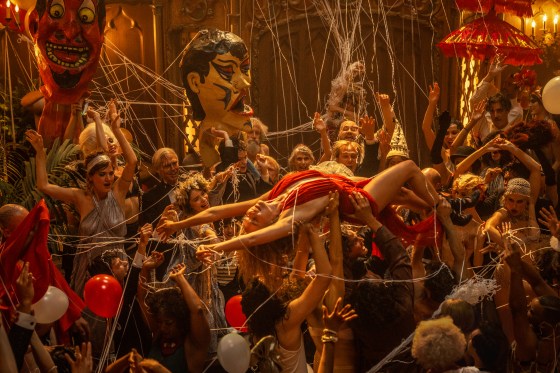 Courtesy of Paramount PicturesMargot Robbie as Nellie LeRoy at the center of a very, very debaucherous party

At this party, love is in the air, and up people’s noses. As he’s trying to manage all the celebratory anarchy, Manny meets his dream girl, Robbie’s Nellie LaRoy, a firecracker of a woman with an unruly halo of hair and so much inner chaos that it spills out around her like glitter from a busted bottle. She’s dressed in what appears to be a length of silk wrapped around her torso a few times, her feet shod in old-fashioned lace-up boots. (Chazelle has stated that he didn’t want any boring 1920s clichés in his movie, and the result is a kind of willful inaccuracy that’s neither inventive nor evocative.) This star-in-her-own-mind talks her way into the party—the dazzled Manny helps out—and immediately makes for a big mountain of cocaine heaped on a silver platter, which Chazelle and Sandgren shoot in extreme closeup, a cartoon candy mountain of depravity. Nellie is a woman of strong appetites and gargantuan dreams, and Manny adores her immediately—because the manic pixie dream girl wasn’t invented yesterday, you know.

By this point in the movie, you may be looking at your watch, thinking, “Oh, good, it’s almost over.” How wrong you would be! There’s more, so much more, to come: Brad Pitt plays Jack Conrad, a rakish but principled silent-film superstar whose adoring audience rejects him once he’s required to speak on camera. He squints his way through the movie, courting pathos with a wry smirk, right to the inevitable end. There’s an interminable, show-offy section in which Nellie—who had proved to be a natural in the wild, wild west of silent filmmaking, capable of an unhinged earthiness that wowed her audiences—can’t manage to perform on a soundstage, given the myriad challenges of recording early sound. Manny, who has moved a few rungs up the movie-business ladder, thanks to his intelligence and charm, turns a charismatic Black bandleader, Sidney Palmer (Jovan Adepo), into a star, but only temporarily. (One thing Chazelle does get right is the racism of early Hollywood.) And a powerful gossip reporter, Jean Smart’s Elinor St. John, swans through it all in a series of Norma Desmond headdresses, reflecting drily on the high jinks around her. At one point, she gives a rather depressed Jack Conrad a pep talk draped in tinsel, basically telling him that although his career is over, he has sealed his reputation in film history. In her silvery, trilling burr, she intones, “But in 100 years, when you and I are both long gone, anytime someone threads a frame of film through a sprocket, you’ll be alive again.” 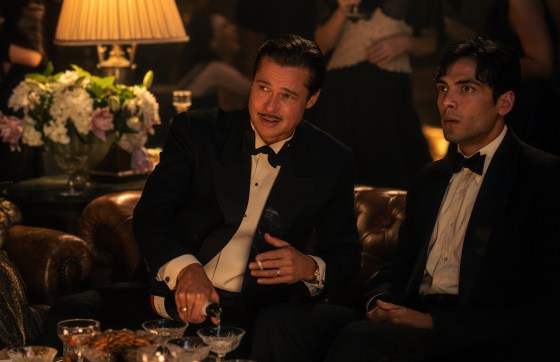 That’s a “Gimme the Oscar!” speech if ever there were one, though it makes zero sense in the context of how film was treated in the days before we became hip to preservation. It’s estimated that some 75 percent of silent films, at minimum, have been lost or destroyed; at the time, people making these films thought of them as throwaway entertainment, almost as ephemeral as theater. It’s unlikely that a real-life Elinor St. John (the character appears to be modeled on powerful gossipmongers like Louella Parsons and Hedda Hopper, though their careers came later) would have had any faith in the permanence of film, even if it makes for a pretty speech about Babylon’s overarching subject, which, in case you haven’t guessed, is the Power of Movies.

Meanwhile, Manny’s path crisscrosses only occasionally with Nelly’s. He gazes at her with lovesickness, selfless in his love for her, while she lives only for dancing and partying and gambling. She has no depth, only characteristics. Dozens of other characters meander through Babylon, many of them referencing real-life figures in vague or obvious ways. There’s a temperamental, bullying director most likely modeled on Erich von Stroheim; a grotesquely depicted actor who’s clearly intended to suggest poor Fatty Arbuckle, whose career was destroyed when he was falsely accused of the rape and murder of young aspiring actress Virginia Rappe, even though a jury acquitted him; a woman director, clad in boyish neck-scarfs and plus-fours, who’s probably modeled on Dorothy Arzner. The most captivating performance in Babylon comes from Li Jun Li, who plays a character named Lady Fay Zhu, an out-in-the-open lesbian and jill of all trades who makes a zowie entrance in a Marlene Dietrich-style tuxedo, singing a breezily off-color little ditty about a subject that rhymes with “kitty.” It’s too bad the whole movie couldn’t be about her.

Instead, Babylon is a manic sprawl that only pretends to celebrate cinema. It’s really about prurience, dumb sensation, self-congratulation and willful ignorance of history. Ambition in filmmakers is a good thing—there’s no forward movement without it, particularly as big-screen projects become harder and harder to mount. If Chazelle’s La La Land was sprawling and imperfect, it at least felt like something of an openhearted enterprise. And First Man, Chazelle’s biopic of notoriously private astronaut Neil Armstrong, may have clogged its own airspace with too much showy psychoanalysis, but it also tried to capture the sense of joy that can be found in science. Babylon is something else, and not a better something else. Its closing sequence features a rapid-fire R.E.M. selection of great images of cinema—Daffy Duck’s loopy visage, Chaplin’s expression of woebegone bewilderment, that lightning-strike of transcendence known as Falconetti—ultimately mingled with flashbacks from Babylon itself. Cinema! It’s wonderful, except when it’s terrible. Late in the film, a reptilian gangster played by Tobey Maguire beckons guests into a lair of iniquity with the words, “Welcome to the asshole of Los Angeles.” Considering where this movie began, we’ve already pretty much been there for the last three hours.