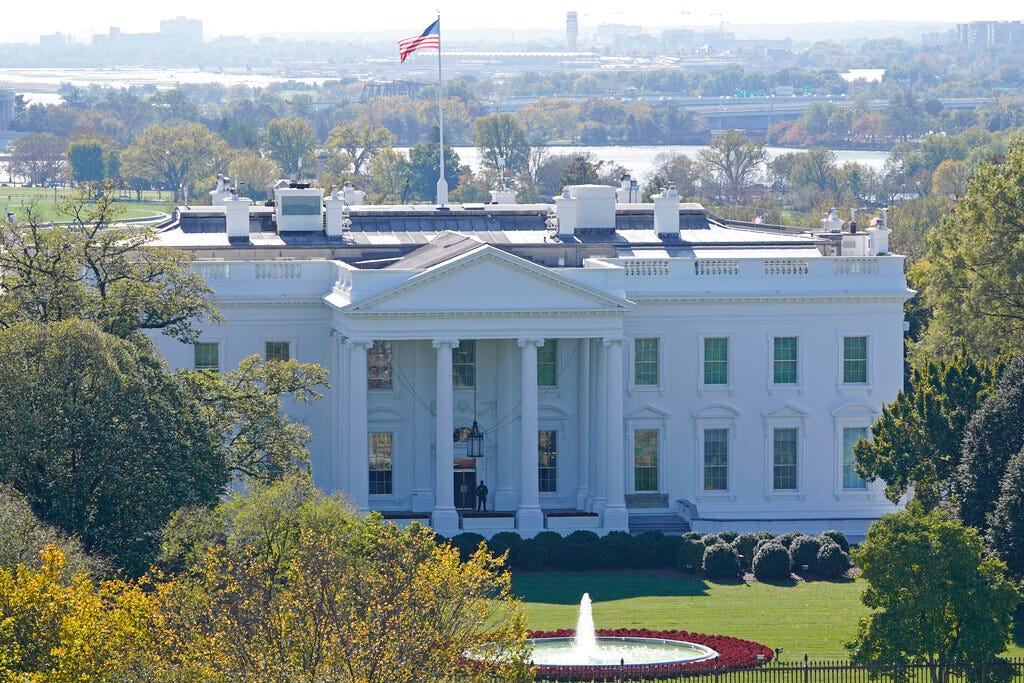 Over the past decade, the road to the White House — once dominated by Florida and Ohio — has evolved.

While bellwethers like Pennsylvania and Wisconsin remain a critical part of the calculus for Democratic and Republican presidential nominees in reaching the 270 electoral vote-threshold for victory, the Sun Belt region has also grown in importance for would-be contenders.

With President Joe Biden eyeing a 2024 campaign and former President Donald Trump having already launched his third White House campaign, the possibility of a rematch of the 2020 election remains high.

But regardless of the eventual presidential nominees, both parties will be targeting a narrow band of six swing states to capture the White House: Arizona, Georgia, Michigan, Nevada, Pennsylvania, and Wisconsin.

Democrats — fresh off a midterm election cycle where they defied conventional political wisdom by retaining their Senate majority and minimizing major losses in the House despite losing control of the lower chamber — are increasingly hopeful that they can reelect Biden if he chooses to run for president again.

And Republicans, who will have a razor-thin House majority in January, believe Biden will be a liability for Democrats. However, the GOP must contend with the toxicity of Trump’s political brand in the major battleground states, whose voters overwhelmingly rejected the former president’s endorsed statewide candidates in the midterms.

Still, the GOP approaches 2024 on firm ground in Florida, where Gov. Ron DeSantis — a potential presidential contender — was reelected in a landslide in November, as well as Ohio, which elected JD Vance to the Senate despite Democratic Rep. Tim Ryan’s strong campaign. 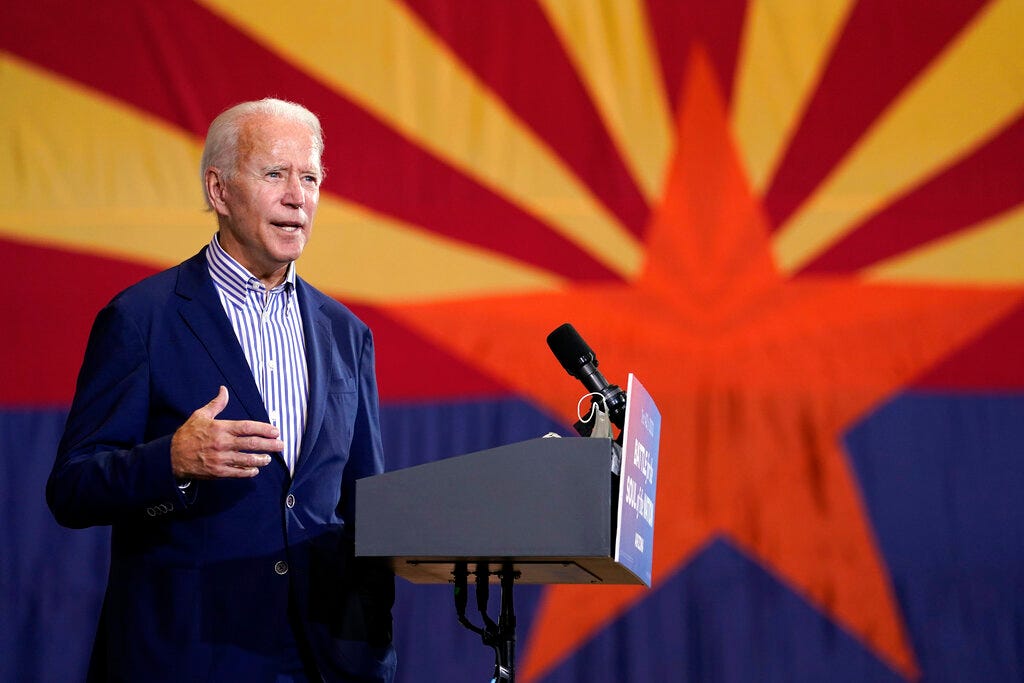 Between 1952 and 2016, Arizona backed the Republican presidential nominee in every election except for 1996 — when then-President Bill Clinton won the state over former Kansas Sen. Bob Dole by a little over 2 points.

Long associated with Barry Goldwater, the conservative political icon who was the Republican presidential nominee in 1964, the Grand Canyon State for decades had a decidedly red lean in federal races.

But as the population of Arizona has swelled, its political orientation has also shifted.

In 2012, former Massachusetts Gov. Mitt Romney easily won the state over then-President Barack Obama, but former Secretary of State Hillary Clinton whittled the GOP margin of victory down to just under 4 points in 2016.

Biden, buoyed by gains among the state’s burgeoning Latino population, narrowly won the state over Trump in 2020 by a little under 11,000 votes out of nearly 3.4 million ballots.

And Democrats feel encouraged by their performance in Arizona in the November midterms.

Not only did Secretary of State Katie Hobbs defeat MAGA-infused Kari Lake in the gubernatorial race, but Sen. Mark Kelly won a full six-year term over Republican Blake Masters and Adrian Fontes was elected to succeed Hobbs over state Rep. Mark Finchem, who repeatedly questioned the 2020 presidential election results. 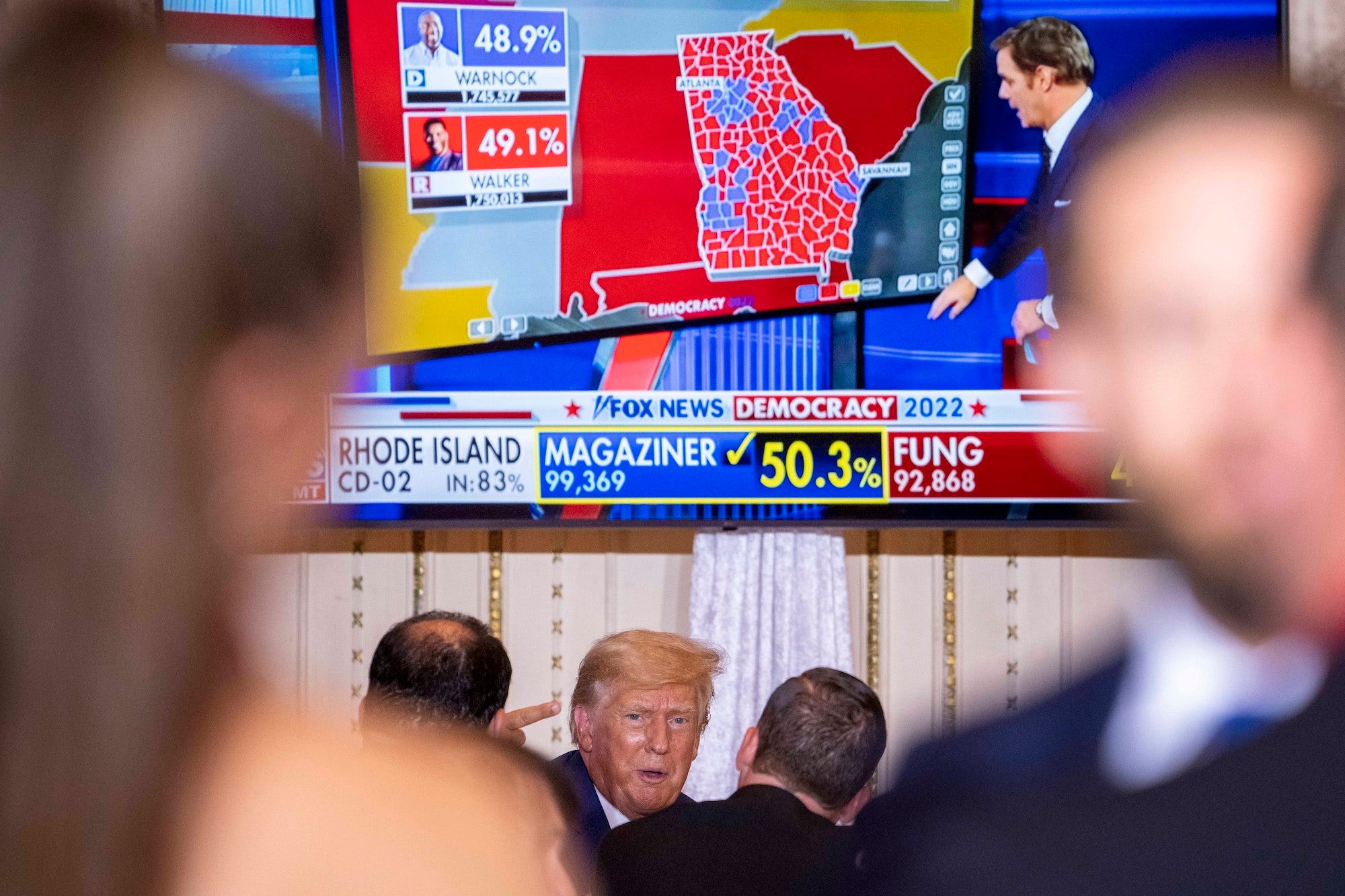 For decades, Republicans could easily depend on the Peach State’s electoral votes falling into their column. No more.

While GOP politicians were enjoying double-digit wins in statewide races, former Democratic state House Minority Leader Stacey Abrams — who saw the possibility of a more politically-competitive Georgia — worked behind the scenes to build a turnout organization that could rival that of the Republican Party.

In 2018, Abrams came within 55,000 votes of winning that year’s gubernatorial election.

The exponential growth of the Atlanta suburbs, driven by new Black, Asian, and Latino residents, has given the state a purple veneer — but this year also showed the limitations of Democratic gains.

Warnock won a full six-year term in a December runoff after fending off a challenge from Republican Herschel Walker, becoming the only Democrat to win statewide in the midterms. But Walker, aided by robust support in the state’s rural counties, still won 48.6% of the vote in the runoff, despite a candidacy that some Republicans saw as deeply flawed.

And Republicans were victorious in every other statewide election, led by Gov. Brian Kemp, who defeated Abrams in a rematch of their 2018 contest by nearly 300,000 votes.

Translation: Georgia will continue to be on everyone’s mind in 2024. 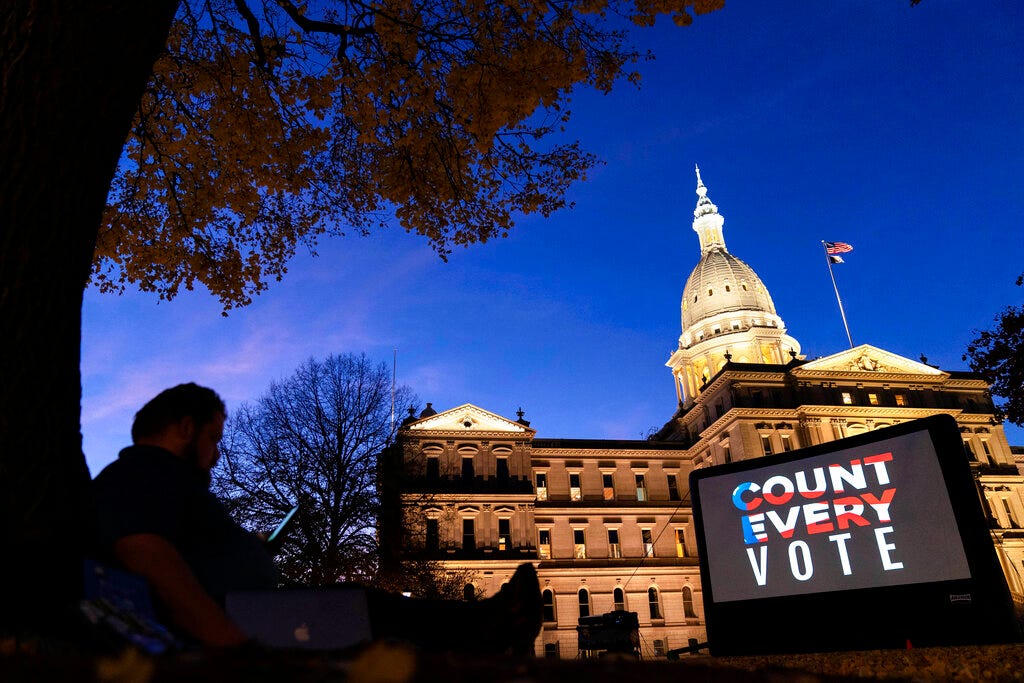 The phrase “Count Every Vote” is displayed outside the Michigan State Capitol in Lansing, Mich., on November 6, 2020.

Michigan has long been a critical part of the electoral calculus for Democrats, as they carried the state in every presidential race from 1992 to 2012 by appealing to voters in Detroit and its middle- and upper-middle-class suburbs, while also enjoying support among union households and moderates in the exurban and rural stretches of the state.

But the party was stunned by Trump’s narrow 2016 win in the longtime blue state, as the Republican made significant inroads with the base of white working-class voters who had been slowly drifting away from Democrats cycle after cycle.

In 2020, the party put a premium on flipping the Wolverine State back into their column, which Biden was able to do, winning by nearly 3 points over Trump.

And in November, Democrats in the state boasted some of their party’s most impressive victories in the entire country.

Gov. Gretchen Whitmer won reelection by nearly 11 points, while state Attorney General Dana Nessel and Secretary of State Jocelyn Benson easily won their races. The party also flipped control of both houses of the Michigan legislature, and a referendum enshrining reproductive rights into the state Constitution was approved by voters.

Still, despite the Democratic wins, the state’s 15 electoral votes will be a sought-after prize for both parties in 2024. 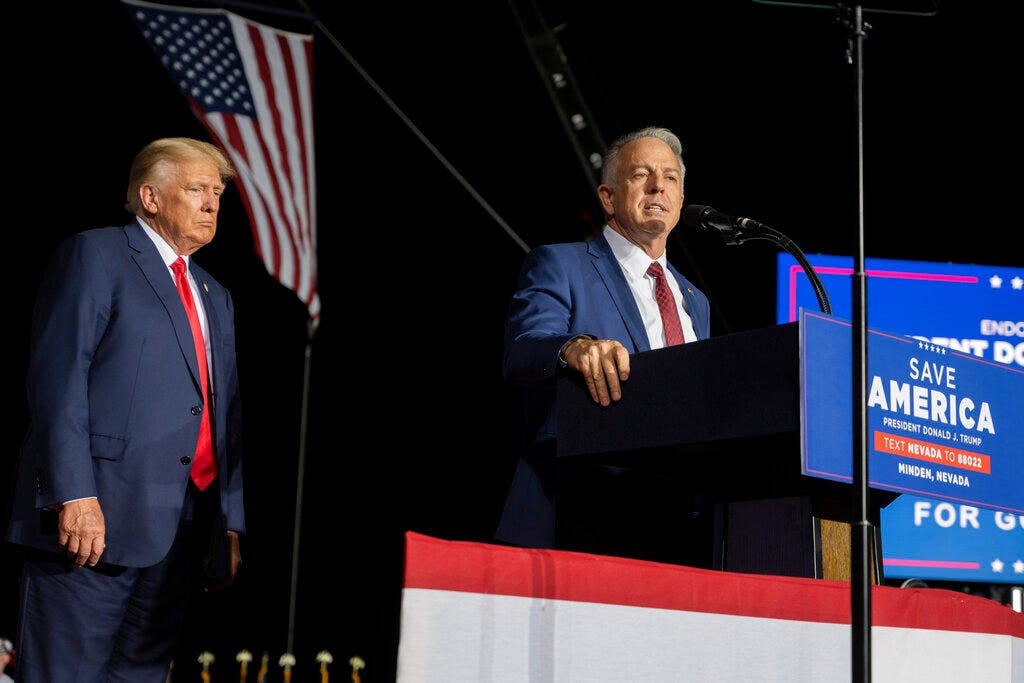 Democrats have been victorious on the presidential level in the Silver State since 2008, when Obama won by nearly 13 points, followed by his victory of nearly 7 points in 2012.

But Clinton and Biden both won the state by a little over 2 points, as Republicans have seen the fast-growing Western state as one that can be flipped into their column, especially if they can make inroads in Democratic-heavy Clark County.

But Democrats also notched a major win by reelecting Sen. Catherine Cortez Masto to a second term over former state Attorney General Adam Laxalt, who had been strongly backed by Trump. And after state Democrats approved congressional maps that some in the party saw as especially risky in a GOP wave year, all three of the party’s House incumbents — Dina Titus, Steven Horsford, and Susie Lee — won their respective races.

The ticket-splitting in the midterms once again showed that Nevada will be hot target for both parties in 2024. 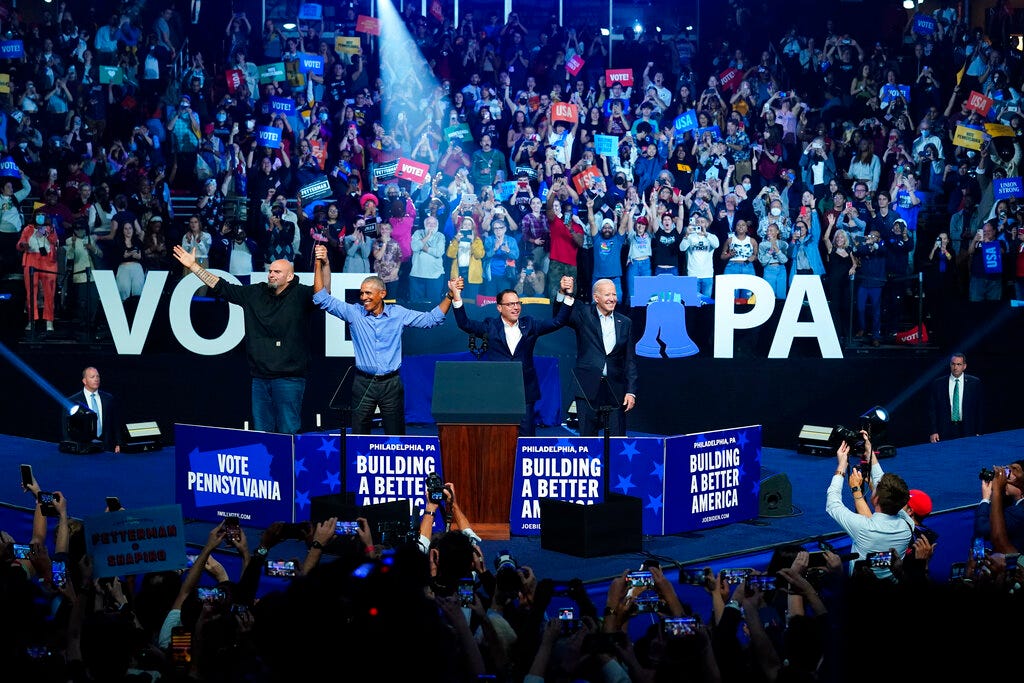 Biden’s hometown of Scranton is dear to his heart so Pennsylvania was always going to be a key state for the party in 2024.

Democrats carried Pennsylvania in every presidential race from 1992 to 2012, until Trump narrowly edged out Clinton in 2016, gaining support among the white working-class voters who populate the exurban and rural communities across the state.

But Biden clawed back in 2020, boosted by strong returns in Philadelphia and its affluent suburbs, as well as a robust vote in Allegheny County, which includes Pittsburgh.

And in 2022, Democrats had a huge year in the state, electing Lt. Gov. John Fetterman to the Senate to succeed retiring GOP Sen. Pat Toomey, while also electing state Attorney General Josh Shapiro in a landslide to succeed term-limited Democratic Gov. Tom Wolf.

Democrats are set to control the state House of Representatives after a series of three special elections in 2023, but a legal dispute with state Republicans could prolong the party’s claim of a majority for the next few months.

Despite the GOP losses, the party — keen on winning back suburban voters and boosting their margins in the state’s rural outposts — will again make a major play for Pennsylvania in 2024. 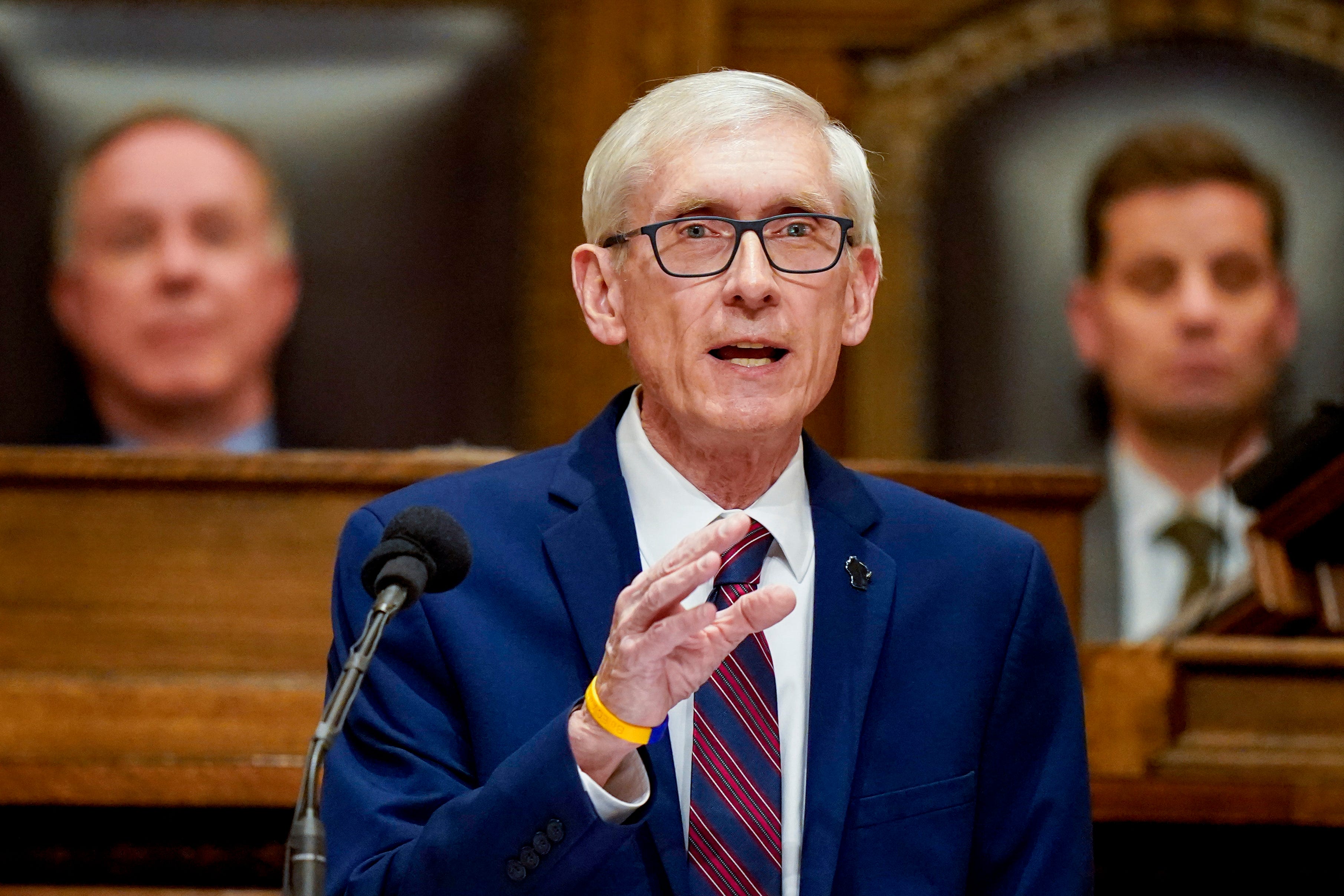 Wisconsin Gov. Tony Evers addresses a joint session of the Legislature in the Assembly chambers at the state Capitol in Madison, Wis., on February 15, 2022.

Wisconsin is one of the most politically-divided states in the country.

Democratic presidential nominees Al Gore and John Kerry eked out statewide wins in 2000 and 2004, respectively, and Obama won the state easily in 2008 and 2012.

But Trump flipped Wisconsin to the GOP in 2016, the first time it had supported a Republican presidential nominee since 1984.

Democrats, stunned by the loss, regrouped and elected Tony Evers as governor in 2018 — knocking out onetime GOP star Scott Walker — while also reelecting Sen. Tammy Baldwin to a second term.

Biden went on to narrowly win the state over Trump in 2020.

And in November 2022, Evers was reelected to a second term over Republican businessman Tim Michels, while GOP Sen. Ron Johnson narrowly defeated Lt. Gov. Mandela Barnes to earn a third term in the upper chamber.

Both parties are eyeing the Badger State in 2024 in what will surely be another competitive race on the presidential level.