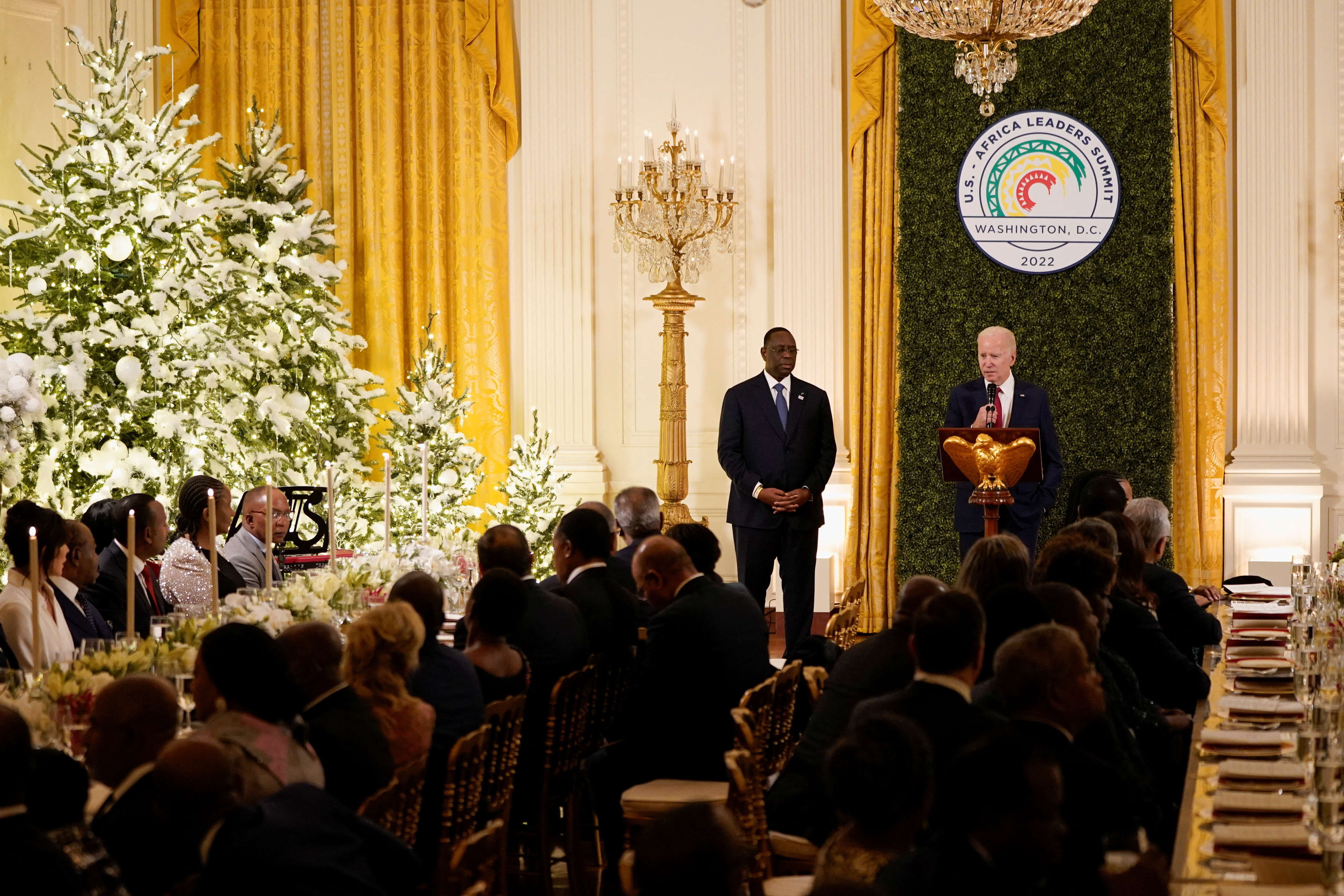 U.S. President Joe Biden speaks as Senegal’s President and Chairperson of the African Union Macky Sall looks on during the U.S.-Africa Leaders Summit dinner in the East Room at the White House in Washington, U.S., December 14, 2022. REUTERS/Elizabeth Frantz

U.S. President Joe Biden on Thursday announced he would support the African Union joining the G20 group of large economies as a permanent member, part of Washington’s efforts to reinvigorate ties with a region that has taken a back seat to other priorities in recent years.

Biden, speaking at a U.S.-Africa leaders summit event, said the United States is looking to increase collaboration in all areas.

“Africa belongs to the table in every room – in every room – where global challenges are being discussed, and in every institution where discussions are taking place,” Biden said.

“It’s been a long time in coming, but it’s gonna come.”

South Africa is currently the only G20 member from Africa. The African Union is made up of 55 member states.

African leaders from 49 countries and the African Union have gathered this week in Washington for a three-day summit that began on Tuesday, with the focus on climate change, food security, trade partnerships and other issues.

Biden’s remarks, and the summit, aim to position the United States as a partner to African countries amid competition with China, which has sought to expand its influence there by funding infrastructure projects on the continent and elsewhere.

Chinese trade with Africa is about four times that of the United States, and Beijing has become an important creditor by offering cheaper loans – often with opaque terms and collateral requirements – than Western lenders.

Adding the African Union to the Group of 20 major economies will give one of the fastest-growing regions of the world a bigger voice in the body.

The G20 has set up a common framework for helping heavily indebted poor countries restructure their debt – much of which is held by China – but that process has moved at a glacial pace.

Having a seat at the table could help some African nations, many of which are not currently eligible for debt treatments under the G20 plan, advance their interests.

It will also give them a bigger say in key issues such as the response to the COVID-19 pandemic and climate change amid mounting frustration that rich countries are not taking enough responsibility for years of rampant fossil fuel usage that has contributed to global warming.

Biden on Thursday also said that he was eager to visit the African continent and that he was looking forward to seeing many of the leaders that attended the Washington summit in their own countries.

The summit is the first of its kind since one in 2014 under former President Barack Obama. To kick it off, the Biden administration pledged $55 billion for food security, climate change, trade partnerships and other issues.

The United States on Thursday also said it would provide over $165 million to support elections and good governance in Africa next year, after Biden met with African leaders facing elections soon.

Biden met on Wednesday with leaders of the Democratic Republic of Congo, Gabon, Liberia, Madagascar, Nigeria and Sierra Leone to discuss upcoming elections in the countries next year, the White House said in a statement on Thursday.

The leaders, who met on the sidelines of summit, discussed the challenges of holding elections, including foreign interference and political violence, the White House said.

Those at the meeting with Biden on Wednesday reaffirmed their commitment to hold “free, fair and transparent elections” that would be conducted by independent national electoral bodies.

“The elections in Africa in 2023 will be consequential. While the United States does not support any specific candidate or party, the United States is committed to supporting electoral processes to deepen democracy in Africa,” the White House said.

Biden’s meeting comes as the United States has grown increasingly concerned about the state of democracy in nations in Africa following a series of coups and concerns over some elections.

Military juntas have snatched power in Guinea, Mali and Burkina Faso since 2020, raising concerns about a return to West Africa’s post-colonial reputation as a “coup belt”.

In November, the United States said it had “serious doubts about the credibility of the announced results” in elections in Equatorial Guinea last month and called on authorities to work with all stakeholders to address allegations of voter fraud.

Washington has also warned it will take action against those undermining the democratic transition in Sudan.

Sudanese political parties and the military signed a framework deal this month that they said would pave the way for a two-year civilian-led transition towards elections and end a sometimes violent stand-off triggered by a coup in October 2021.