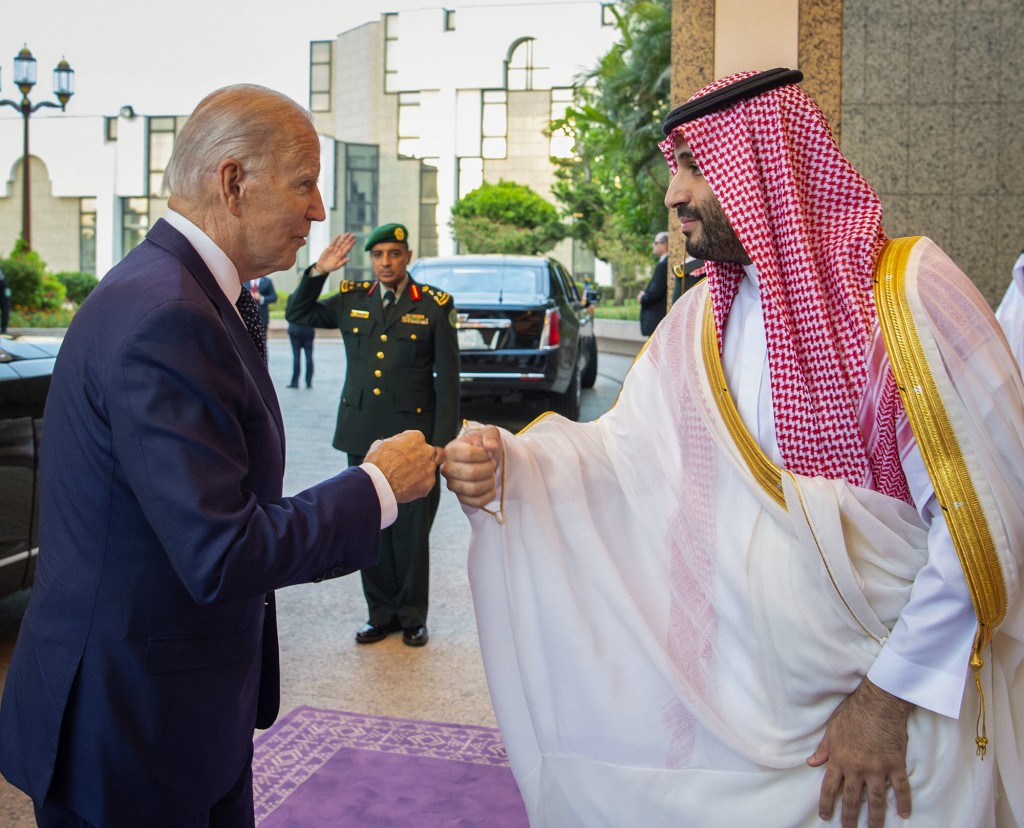 It’s hard to imagine what more Crown Prince Mohammed bin Salman could do that would actually spur the Biden administration to use the full force of the presidency to oppose his murderous reign in Saudi Arabia. Ordering the execution and literal butchering of a Washington Post journalist certainly didn’t do it. Conducting mass executions of its own citizens? Old news. Waging a merciless scorched-earth campaign against the civilian population of a poor neighboring country? The U.S. continues to support that one. Let’s have another fist bump, old pal.

Two years into Biden’s presidency, it is crystal clear that the Saudis have nothing significant to fear from the U.S. government. From a historical perspective, that is not in the least shocking. For decades, Democratic and Republican administrations have propped up the Saudi monarchy, lathering it with weapons sales and intelligence sharing, all while normalizing the draconian, antidemocratic grip on power held by the monarchy.

When Donald Trump was president, a lot of Democrats were given political cover to finally come around to opposing the Saudi-led campaign of annihilation in Yemen. Trump was so cartoonishly cozy with MBS and the royals as their air war intensified and arms sales escalated that it became an almost irrelevant footnote that it was the Obama-Biden administration that gave the initial green light to the Saudi-led war in the first place. Or the fact that Barack Obama began bombing Yemen in December 2009 and continued to hit the country with drone strikes and cruise missile attacks throughout most of his presidency. In fact, by the time Obama left office, his administration had offered the Saudis more military support, $115 billion, than any in the history of the seven-decade U.S.-Saudi alliance.

By 2019, particularly in the aftermath of journalist Jamal Khashoggi’s October 2018 murder, Yemen had become a Trump-made humanitarian disaster. That framing — which was bolstered by Trump’s garish public support for MBS after the murder — meant it was OK for more Democrats to oppose continued U.S. support for the Saudi’s brutal military campaign. A bipartisan war powers resolution aimed at doing that passed in 2019. Trump ultimately vetoed it, but it was nonetheless an achievement. Biden’s current national security adviser Jake Sullivan — along with Samantha Power, Colin Kahl, Susan Rice, and Wendy Sherman — signed a letter calling on Congress to override Trump’s veto.

On the campaign trail, Biden pledged to continue the momentum and end U.S. bodyguarding of Saudi Arabia’s crimes, particularly after the execution of Khashoggi, a permanent U.S. resident, inside the Saudi consulate in Istanbul. If elected president, Biden said in a November 2019 Democratic primary debate, “I would make it very clear we were not going to in fact sell more weapons to them. We were going to in fact make them pay the price, and make them in fact the pariah that they are.” Biden asserted that there is “very little social redeeming value in the present government in Saudi Arabia.” As for the war in Yemen, Biden promised to “end the sale of material to the Saudis where they’re going in and murdering children.”

Well, that was then and this is now. Politicians say stuff when they are running for office that they don’t really mean. In fact, sometimes they mean just the opposite.

On Tuesday, the Biden White House went into legislative guerrilla battle mode to undermine support for the updated version of the war powers resolution that Trump vetoed. The resolution, introduced by Sen. Bernie Sanders, I-Vt., would have prohibited U.S. support for offensive Saudi operations in Yemen. Biden administration officials aggressively lobbied lawmakers to oppose the measure, and told them Biden “strongly opposed” it and that they would recommend he veto it should it pass. Sanders ultimately pulled the resolution, saying: “[T]he Biden administration agreed to continue working with my office on ending the war in Yemen. Let me be clear. If we do not reach agreement, I will, along with my colleagues, bring this resolution back for a vote in the near future and do everything possible to end this horrific conflict.” Make sure to check out the excellent reporting on this by Ryan Grim and Ken Klippenstein.

Now, you might be forgiven for believing that there would be actual consequences for MBS and Saudi Arabia given Biden’s pledges as a candidate for president, particularly that business about making them a pariah. In fact, Biden made the same promise about another world leader in February when he launched a murderous war against a neighbor. “Putin’s aggression against Ukraine will end up costing Russia dearly, economically and strategically,” he said the day Russian forces began the attack on Ukraine. “We will make sure that Putin will be a pariah on the international stage.”

It is, at times, tempting to imagine what would happen if Biden were to use even a modest fraction of the weight of American power in confronting Saudi Arabia that it has brought to bear on Russia. But doing so would be an exercise in fantasy. As president, Biden has greenlighted a series of U.S. weapons purchases by the Saudis, including $3 billion worth of Patriot missiles in August. These weapons deals, in the words of the administration, “will support U.S. foreign policy and national security objectives by helping to improve the security of a friendly country that continues to be an important force for political stability and economic growth in the Middle East.”

Sanders says he is not giving up on the Yemen resolution and that the White House has indicated it will “work with us on crafting language that would be mutually acceptable.” Even if some form of a compromise is reached that allows a version of the resolution to pass, it will be a far cry from bringing any meaningful accountability for the crimes of the Saudi regime. And it will not result in any action vaguely resembling the promises Biden made as a candidate for president. The resolution is narrowly focused on ending U.S. support for explicitly “offensive” Saudi operations in Yemen.

Former Michigan Rep. Justin Amash, a longtime opponent of U.S. policy on Saudi Arabia who left the Republican Party and became an independent, criticized Sanders for withdrawing the resolution. “Totally unacceptable. You know this is the game administrations and congressional leaders have been playing for years,” Amash tweeted. “They won’t respond to your gesture with anything but further delay and obfuscation. Biden wants it held until Rs control the House so they can block it for him.”

In its talking points opposing the Sanders measure, obtained by The Intercept, the White House argues that its own strategy was already succeeding in deescalating the Yemen war: “The situation is still fragile, and our diplomatic efforts are ongoing. … A vote on this resolution risks undermining those efforts.”

Some administration allies also argued that the language of Sanders’s resolution defining the term “hostilities” could set a precedent that potentially undermines the legal framework for U.S. military support to Ukraine. According to the definition in the resolution, the U.S. would be prohibited from “sharing intelligence for the purpose of enabling offensive coalition strikes” and “providing logistical support” for such strikes “by providing maintenance or transferring spare parts to coalition members flying warplanes engaged in anti-Houthi bombings in Yemen.” It also stated that neither military nor civilian personnel from the Defense Department would be permitted “to command, coordinate, participate in the movement of, or accompany the regular or irregular military forces of the Saudi-led coalition forces in hostilities against the Houthis in Yemen or in situations in which there exists an imminent threat that such coalition forces become engaged in such hostilities.”

In his December 8 “War Powers Report” to Congress, Biden asserted that ongoing U.S. military support for the “Saudi-led Coalition” does not “involve United States Armed Forces in hostilities with the Houthis for the purposes of the War Powers Resolution.”

What was notably absent from the White House talking points was any mention of Iran. Throughout both the Trump and Biden administrations, support for Saudi Arabia has been viewed in part through the lens of the U.S. effort to prepare for the possibility of future overt conflict, or even war, with Iran. In his War Powers Report last week, Biden stated that there are currently 2,755 U.S. military personnel deployed in Saudi Arabia “to protect United States forces and interests in the region against hostile action by Iran and Iran-backed groups.” In coordination with the Saudis, these forces “provide air and missile defense capabilities and support the operation of United States military aircraft.”

With Tehran and Moscow developing closer ties in the midst of the Ukraine war, and Iran shipping drones and other munitions to Russia, the Biden administration may well be concerned about legally soldering any explicit limitations to its support for Riyadh. The U.S. also continues to wrestle with how to respond to Saudi maneuvers around global oil supply and pricing.

The White House campaign this week to stop the Yemen resolution is taking place against the backdrop of the Biden administration intervening in a lawsuit against MBS for Khashoggi’s murder. On December 6, despite “the credible allegations of his involvement in Khashoggi’s murder,” a federal judge threw out the case because “the United States has informed the court that he is immune.” That move drew harsh words, even from some of Biden’s most passionate supporters in the Senate. Virginia Sen. Tim Kaine, who was Hillary Clinton’s running mate in 2016, charged that the Biden administration “has chosen to take the side of the party that our own intelligence agencies have concluded is responsible for the murder.” Kaine called it a “deliberate and callous decision” by the administration that “sends a horrific message to despots around the world.”

The next time Joe Biden promises to make an international leader a pariah, he should clarify which of his interpretations of the word he means: the universally accepted definition or the one he has applied to MBS and Saudi Arabia, which has proven to mean the exact opposite.