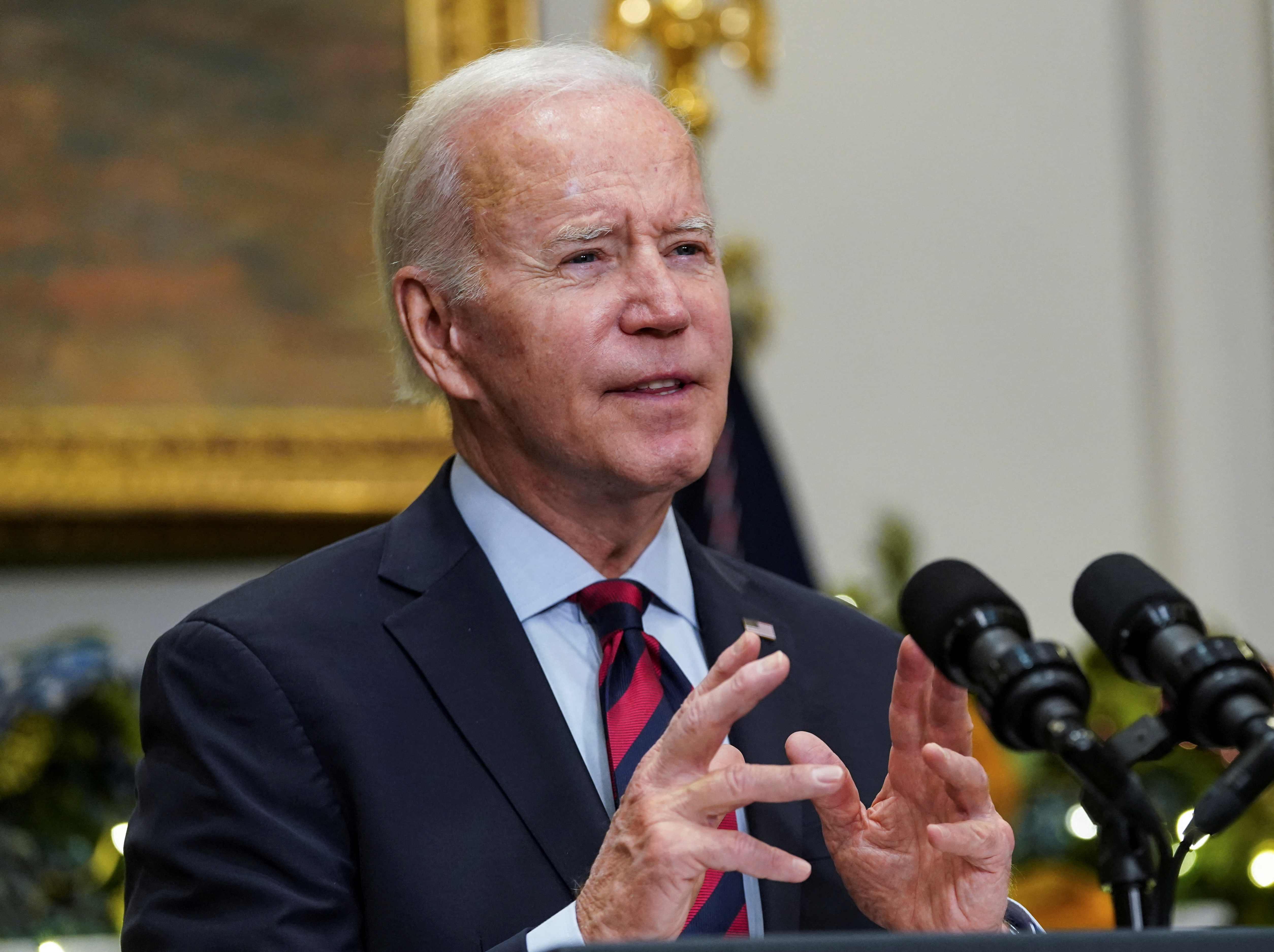 U.S. President Joe Biden speaks prior to signing railroad legislation into law, providing a resoluton to avert a nationwide rail shutdown, during a signing ceremony in the Roosevelt Room at the White House in Washington, U.S., December 2, 2022. REUTERS/Kevin Lamarque

President Joe Biden has floated a trial balloon to President Vladimir Putin to determine whether Russia, after months of battlefield losses and stalled gains, is ready to end its invasion of Ukraine.

Biden has avoided talking to Putin since the Russian leader sent his armed forces into Ukraine last February, called him a war criminal responsible for thousands of deaths, and atrocities and said he “cannot remain in power.”

But at a news conference with French President Emmanuel Macron on Thursday, Biden offered what appeared to be a diplomatic opening.

“Let me choose my words very carefully,” Biden said. “I’m prepared to speak with Mr. Putin if in fact there is an interest in him deciding he’s looking for a way to end the war. He hasn’t done that yet.”

The Kremlin shot back that Putin is “open to negotiations” but that the West must accept Russian demands, a sign that Moscow is sticking to its desire to control part of Ukraine and show the Russian people that his “special military operation” is not in vain.

Biden and his national security advisers have wondered for months what it would take to entice Putin into a diplomatic off-ramp. The United States has sent more than $18 billion in American weaponry to Ukraine to help repel Russia, and tens of billions of dollars in other aid.

“We’re trying to figure out what is Putin’s off-ramp…Where does he find a way out? Where does he find himself in a position he does not, not only lose face but lose significant power in Russia,” Biden said at a Democratic fundraiser in New York in October.

Speculation about talks to end the war have accelerated as Moscow’s war gains have stalled, while its missile strikes against electric power facilities in Ukraine have raised the possibility that millions of Ukrainians will face the winter without electricity.

U.S. Army General Mark Milley, chairman of the Joint Chiefs of Staff, has reflected a view within the Biden administration that Ukraine has made about all the gains it can on the battlefield at this stage.

“The probability of a Ukrainian military victory – defined as kicking the Russians out of all of Ukraine to include what they claim as Crimea – the probability of that happening anytime soon is not high, militarily,” Milley told reporters on Nov. 16.

Biden, who talks regularly to Ukraine President Volodomyr Zelenskiy, has previously been clear he defers to Ukraine’s wishes. “There’s no — nothing about Ukraine without Ukraine,” Biden said Nov. 14, when asked about possible negotiations.

He reiterated U.S. support for Ukraine at the his news conference with Macron.

“We’ll continue the strong support for the people of Ukraine as they defend their homes and their families and their sovereignty and territorial integrity against Russian aggression, which has been incredibly brutal,” he said. He called the idea that Putin could defeat Ukraine “beyond comprehension.” I

On negotiations, though he mentioned NATO allies, not Zelenskiy. “I’m prepared, if he’s willing to talk, to find out what he’s willing to do, but I’ll only do it in consultation with my NATO allies. I’m not going to do it on my own.”

But Macron, standing next to Biden, made the point that “we will never urge the Ukrainians to make a compromise which will not be acceptable for them.”

Biden’s remarks could play well among many countries wary of being stuck in the middle of a stand-off between the United States and Russia and paying the price for Moscow’s war, which the United Nations says has fueled a global food crisis.

In Kyiv last month, U.S. Ambassador to the United Nations, Linda Thomas-Greenfield noted Zelenskiy had said he was willing to undertake diplomacy with Russia under certain conditions.