Michael Burry, the hedge fund manager of “The Big Short” fame, rang the alarm on the “greatest speculative bubble of all time in all things” in the summer of 2021. He warned the retail investors buying up meme stocks and cryptocurrencies that they were headed towards the “mother of all crashes.”

The Scion Asset Management chief’s grim prediction may be coming true, as the S&P 500 and Nasdaq indexes tumbled by 19% and 33% respectively in 2022. In tweets posted in May 2022 then subsequently deleted, Burry took credit for calling the sell-off, explained why he expects further declines, and cautioned against buying into relief rallies.

Here’s a roundup of Burry’s best tweets about the stock-market slump:

The pandemic crash was just the start 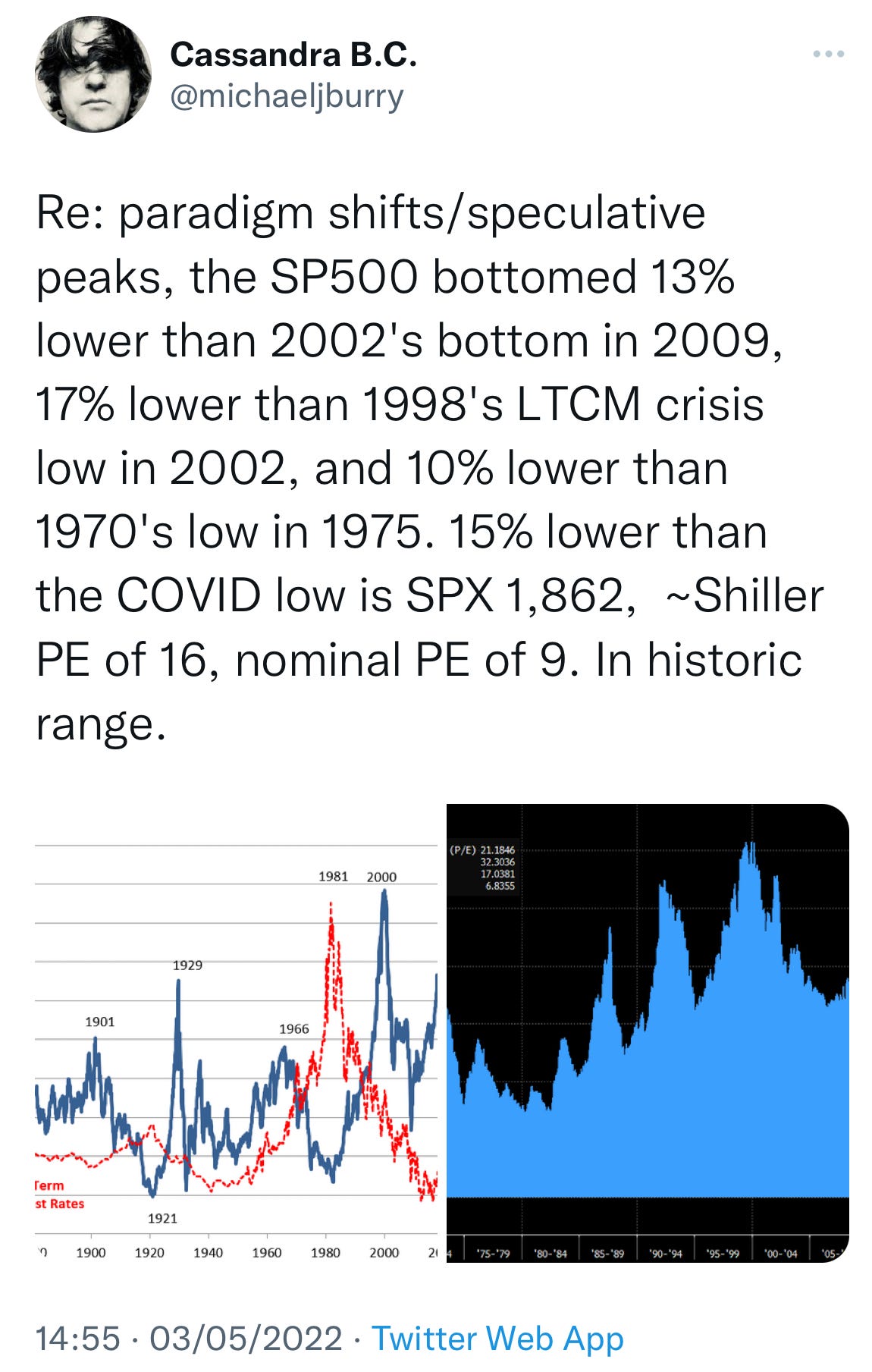 If the benchmark index follows that historical pattern, it could trade 15% lower than its level in the spring of 2020, Burry said.

There may be epic but short-lived rallies 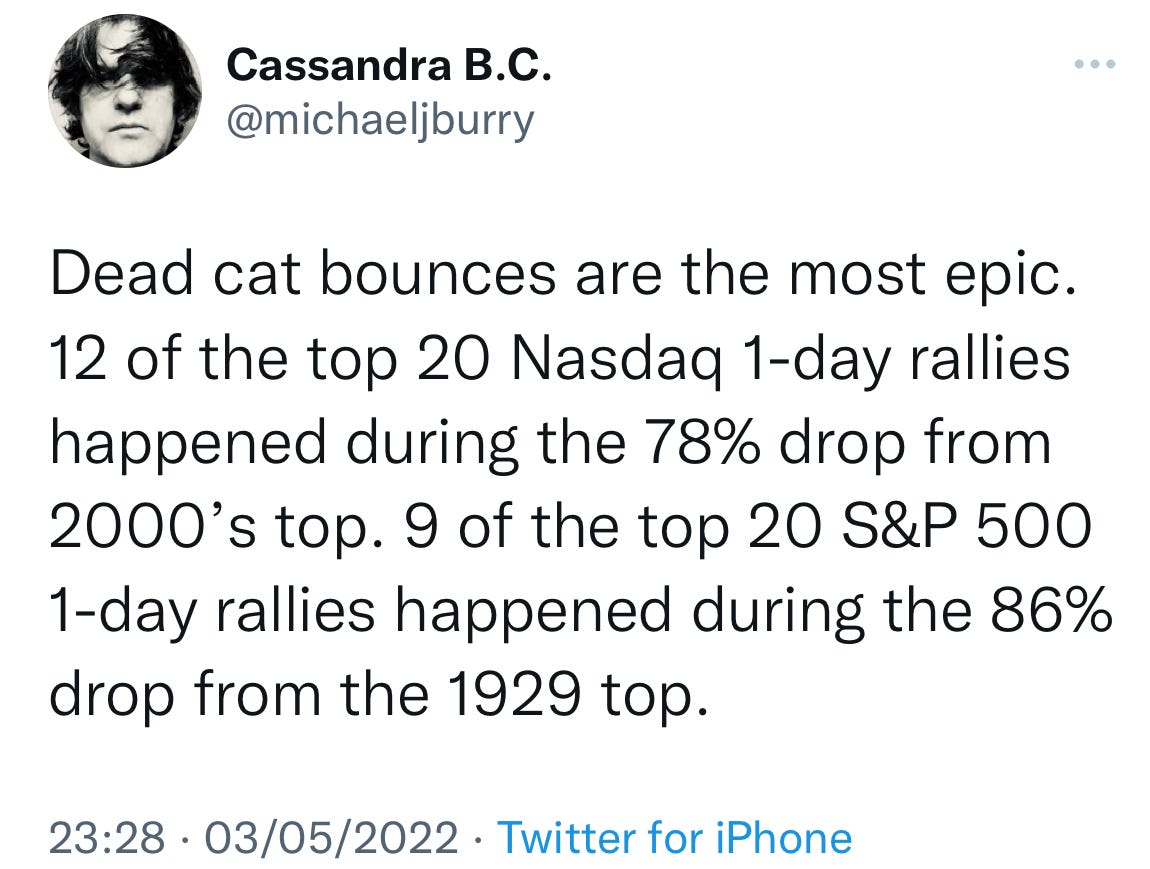 A “dead cat bounce” refers to a temporary rebound in stock prices after a significant fall, often because speculators buy shares to cover their positions.

They often occur during major declines in the stock market, Burry said in a May 4 tweet. The implication is that investors shouldn’t get their hopes up about any rallies in the coming months, as they’re likely to be brief respites that won’t result in a market recovery.

Don’t be fooled by stocks rebounding 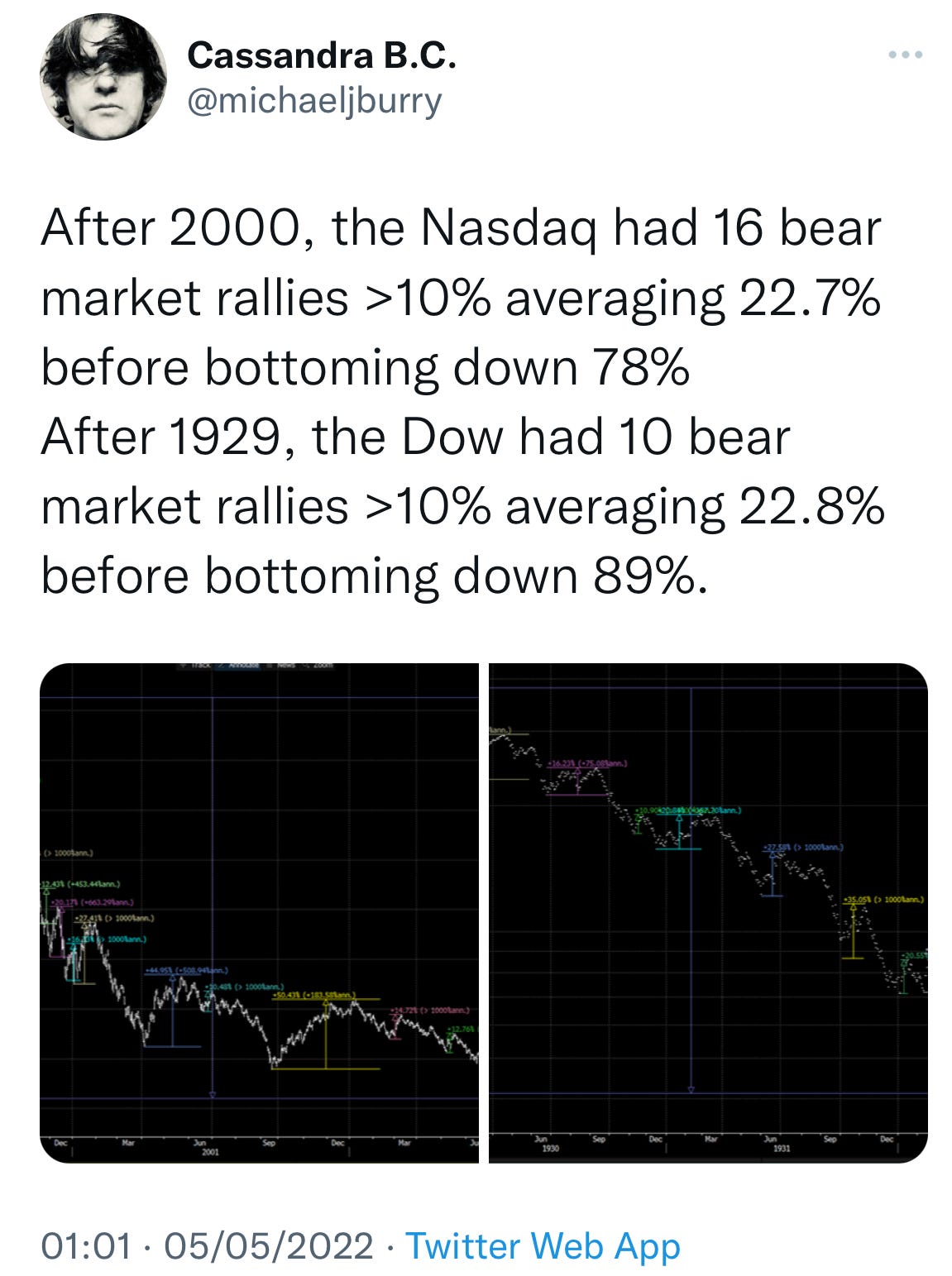 Stocks could stage multiple rallies before the crash is over, Burry warned in a May 5 tweet.

He noted that after the dot-com bubble burst, the Nasdaq rallied 16 times by more than 10% — gaining on average 23% each time — on its way to a 78% decline at its nadir.

Burry also emphasized that after the Great Crash of 1929, the Dow Jones index rallied 10 times by more than 10%, rising by an average of 23% each time, before bottoming at a 89% decline.

Stocks are on a dangerous trajectory 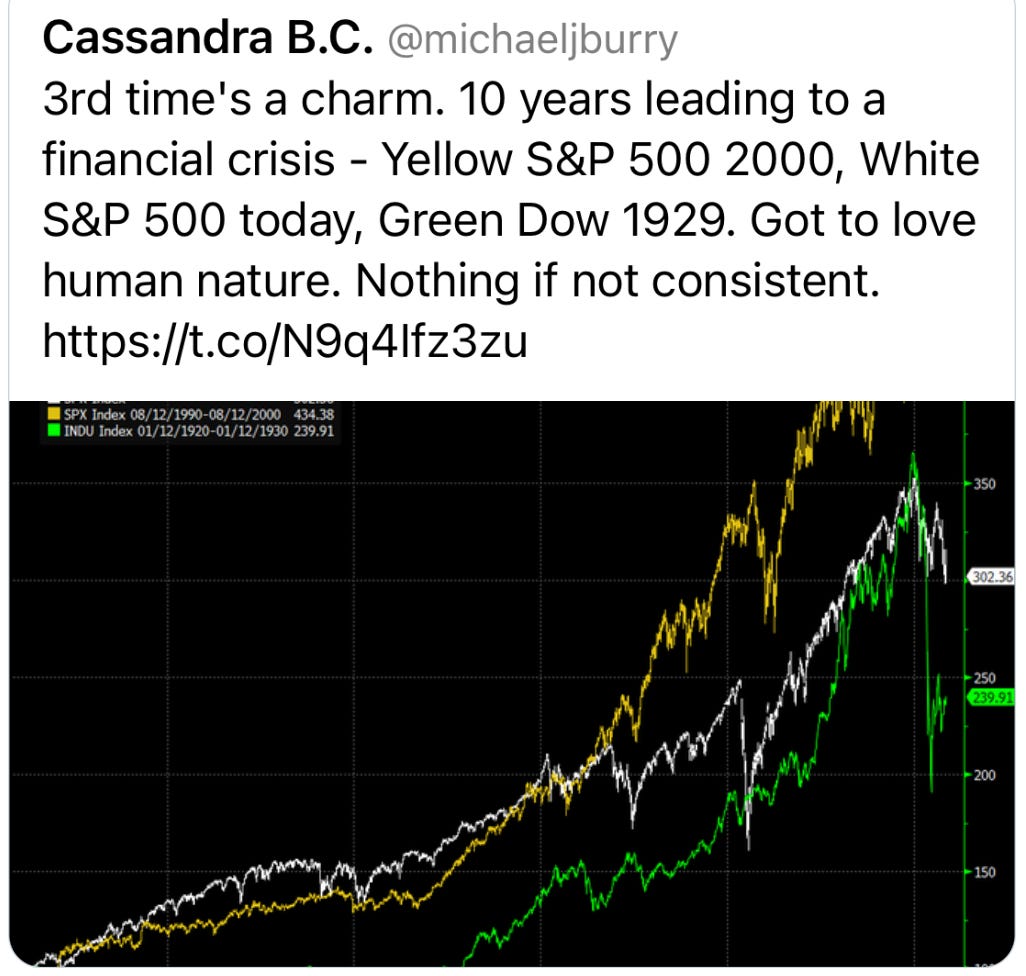 The US stock market appears to be following the pattern of previous bubbles, leaving it poised for a monumental crash, Burry noted in a May 8 tweet.

The Scion chief pointed to the S&P 500’s trajectory over the past 10 years, noting it was strikingly similar to the index’s chart for the decade leading up to the dot-com crash, and the Dow’s chart for the 10 years before the Great Crash of 1929.

Burry suggested that human nature was behind the consistently decade-long buildups, and implied that history is repeating itself. 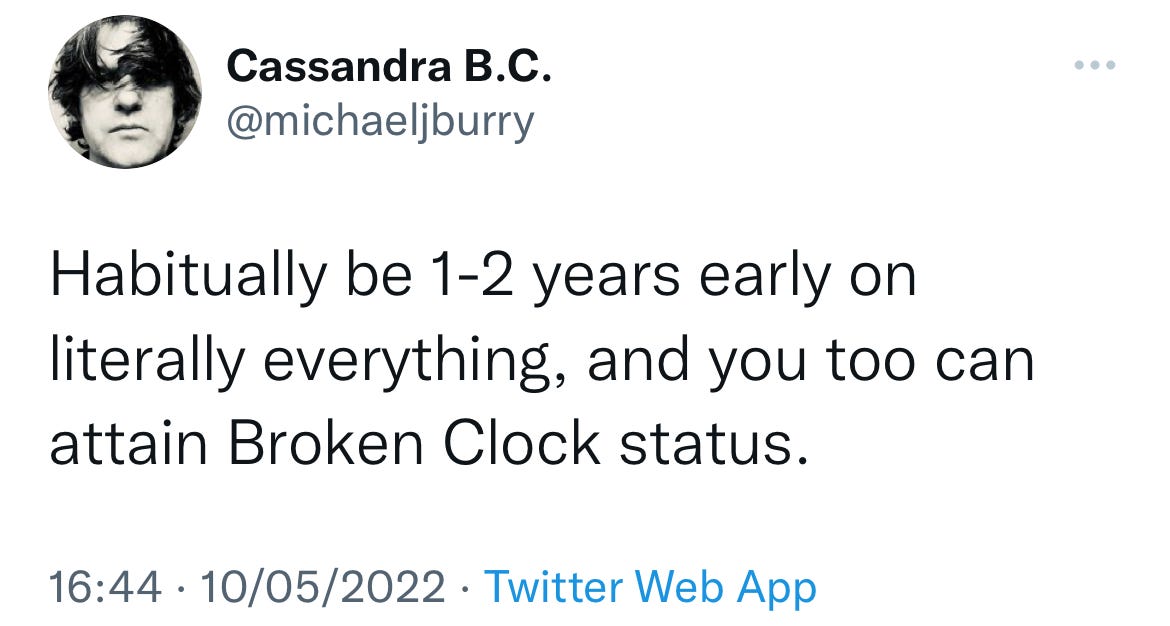 Burry appeared to take a victory lap in a May 10 tweet, suggesting he believes the stock-market crash that he’s been warning about has finally arrived.

The Scion boss joked he was early with his prediction, just as he was during the mid-2000s US housing bubble.

Burry also nodded to Elon Musk calling him a “broken clock” last year, after the Scion chief bet against Tesla stock, predicted it would collapse in value, and questioned Musk’s motives for selling his company’s shares.

Stocks are set to tumble a lot further 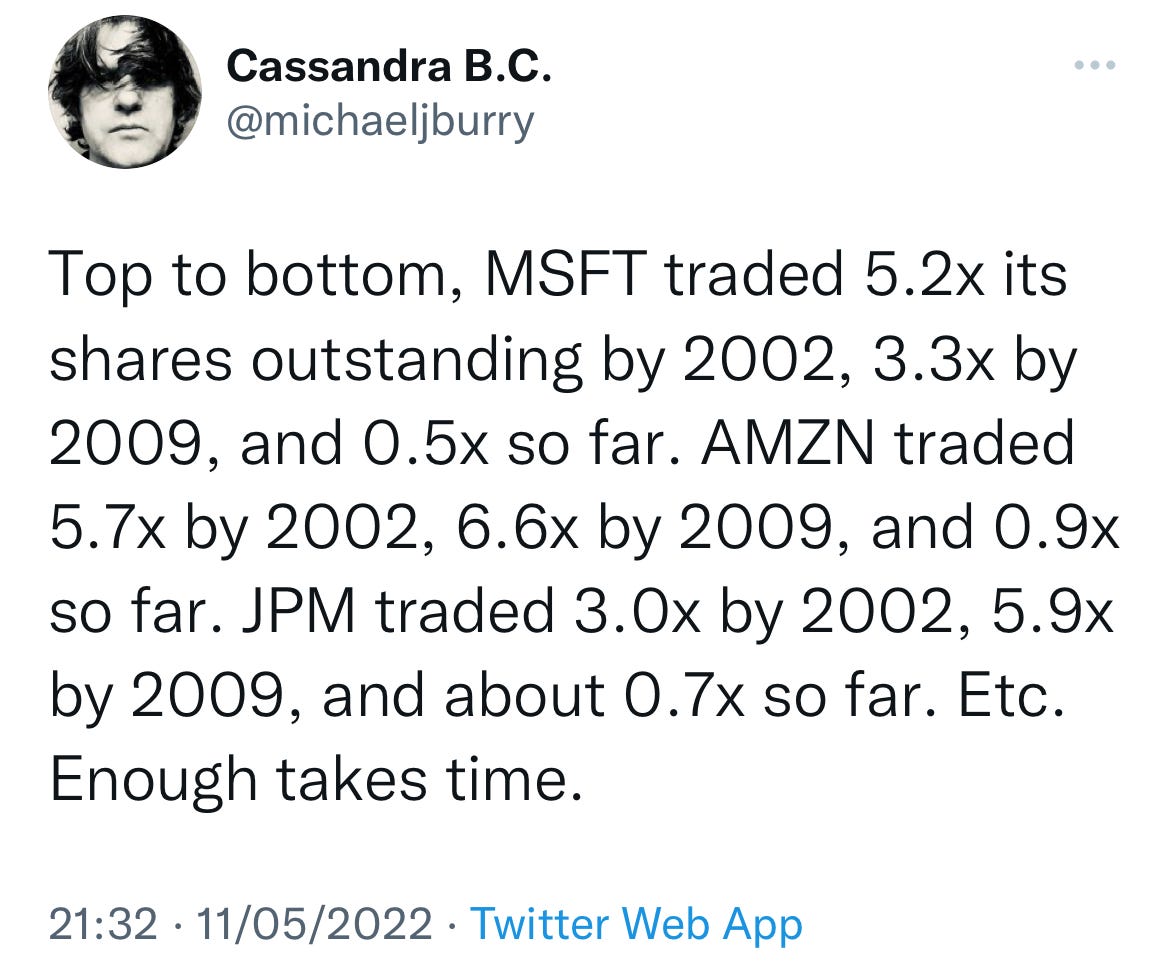 Investors can expect stocks to fall a lot further, Burry warned in a May 11 tweet.

The investor noted that 5.2 times Microsoft’s outstanding shares were traded between the software stock’s peak during the dot-com bubble and its bottom in 2002. That figure was 3.3 times during the financial crisis, but had only reached 0.5 times at the time of his tweet.

Burry noted it was a similar story with Amazon and JPMorgan, indicating it could be a while before those stocks and others bottom out.

Read more: We interviewed the CEOs of 4 of Warren Buffett’s most iconic businesses. Here are their 16 best quotes about the investor, Berkshire Hathaway’s ownership, and navigating the pandemic and inflation.

Home » Audio Sources - Full Text Articles » ‘Big Short’ investor Michael Burry warned stocks would crash and rallies wouldn’t last. Here are 6 of his key tweets in 2022, and what they meant.
a