Justice Alexandre de Moraes ordered the arrest of Anderson Torres, who was Bolsonaro’s justice minister before taking over this month as the public security chief for Brasilia, where thousands of protesters vandalized the Supreme Court, Congress and presidential offices on Sunday. It was not immediately clear what the charges were.

Torres did not immediately respond to a Reuters request for comment. The Supreme Court said it could not confirm the arrest warrant.

Torres was removed from office on Sunday after facing criticism that security forces failed to stop the invasion and ransacking of the key government buildings. Earlier, he had told local media on Sunday that he was vacationing in the United States with his family in Orlando, where Bolsonaro is now staying.

A Reuters witness spotted police at the Torres family residence in an upscale Brasilia neighborhood, where a resident said they left carrying bags.

Across town, police continued to question some 1,500 protesters held in an overcrowded gymnasium after they were detained as troops dismantled their camp opposite the army’s headquarters. Demonstrators set off from there on Sunday before storming the government buildings.

Protesters at the camp had called for a military coup to overturn the October election in which leftist President Luiz Inacio Lula da Silva narrowly defeated Bolsonaro, who made baseless suggestions of a rigged election.

Moraes, who is running investigations of the “anti-democratic” demonstrations, vowed in a speech on Tuesday to combat the “terrorists” calling for a coup.

“Democracy will prevail and Brazilian institutions will not bend,” said Moraes at the swearing-in of a new head of the federal police.

Yet the challenge of carrying out such an enormous criminal investigation into a loosely organized pro-Bolsonaro demonstration in the first weeks of a new government was already beginning to show.

Roughly 1,500 detainees were held for questioning at a police gymnasium where they slept on the ground, some wrapped in Brazilian flags, and complained to a Reuters journalist that they were being held indefinitely and poorly fed. They sang and took selfies with their phones, video posted on social media showed.

Opposition Senator Marcos do Val, who has denounced the Brasilia attack as a blunder for the political right, told journalists outside the gym that many of those detained “are paying for being in the wrong place at the wrong time.”

By late afternoon, 527 were arrested, while 599 detainees were released, most of them elderly people, mothers with children or people with health problems, said the police.

Around 200 other demonstrators were under arrest and awaiting charges in a penal facility for their role in Sunday’s rampage, which vandalized some of the capital’s most iconic buildings in the worst attack on Brazilian democracy in decades.

Government lawyers asked Moraes to order cellphone carriers and social media platforms to store information that could place users in the areas of demonstrations on Sunday as authorities try to identify the organizers and their financial sources.

Investigations may also sprawl far beyond Brasilia. Pro-Bolsonaro militants discussed on social media their plans to disrupt highways and oil refineries to cause economic chaos in synch with their storming of the capital.

Brazilian energy company Eletrobras (ELET6.SA) is investigating whether the collapse of two transmission towers was related to Sunday’s violence in Brasilia, according to two sources familiar with the probe.

Eletrobras did not immediately respond to requests for comment. Its subsidiary, Eletronorte, released a statement on Monday about a fallen tower connecting rural communities in northern Brazil to the central grid, with “signs of sabotage.”

Financial markets largely shrugged off the failed attempt to disrupt the democratic transfer of power in Latin America’s largest economy, with the Bovespa stock index (.BVSP) up 1.5% on Tuesday and Brazil’s currency, the real , rebounding almost 1% against the U.S. dollar.

But the violence stunned Lula’s government, which has been in office for barely a week, and could delay economic policy announcements that were planned for this week by an administration eager to show results.

Lula’s chief of staff, Rui Costa, said the government was back to work and policy decisions would be made on time.

On Monday night, Lula, who took office on Jan. 1, met with the head of the Supreme Court, congressional leaders and state governors in a show of national unity to condemn the riots. They visited the ransacked Supreme Court building, which was the site most damaged by the pro-Bolsonaro rioters.

Lula accused Bolsonaro’s supporters of trying to overthrow democracy and questioned why the army had not discouraged calls for a military coup.

“People were openly calling for a coup outside the barracks, and nothing was done. No general lifted a finger to tell them they could not do that,” the 77-year-old president said. He accused some security forces of being complicit with rioters.

The Brazilian army did not respond to a request for comment on Lula’s comments.

Bolsonaro, who flew to Florida 48 hours before his term ended, was admitted to a hospital in the U.S. state. He told CNN Brasil he may cut short his stay there due to his medical issues, returning to Brazil before the end of the month.

His son, Senator Flavio Bolsonaro, denied on Tuesday that the former president was responsible for the demonstration.

“Since the election result he’s been silent, licking his wounds, virtually incommunicado,” he said in a session in the Senate.

Public prosecutors asked on Tuesday for a federal audit court to freeze the ex-president’s assets in light of Sunday’s vandalism – a move outside the traditional scope of that court. 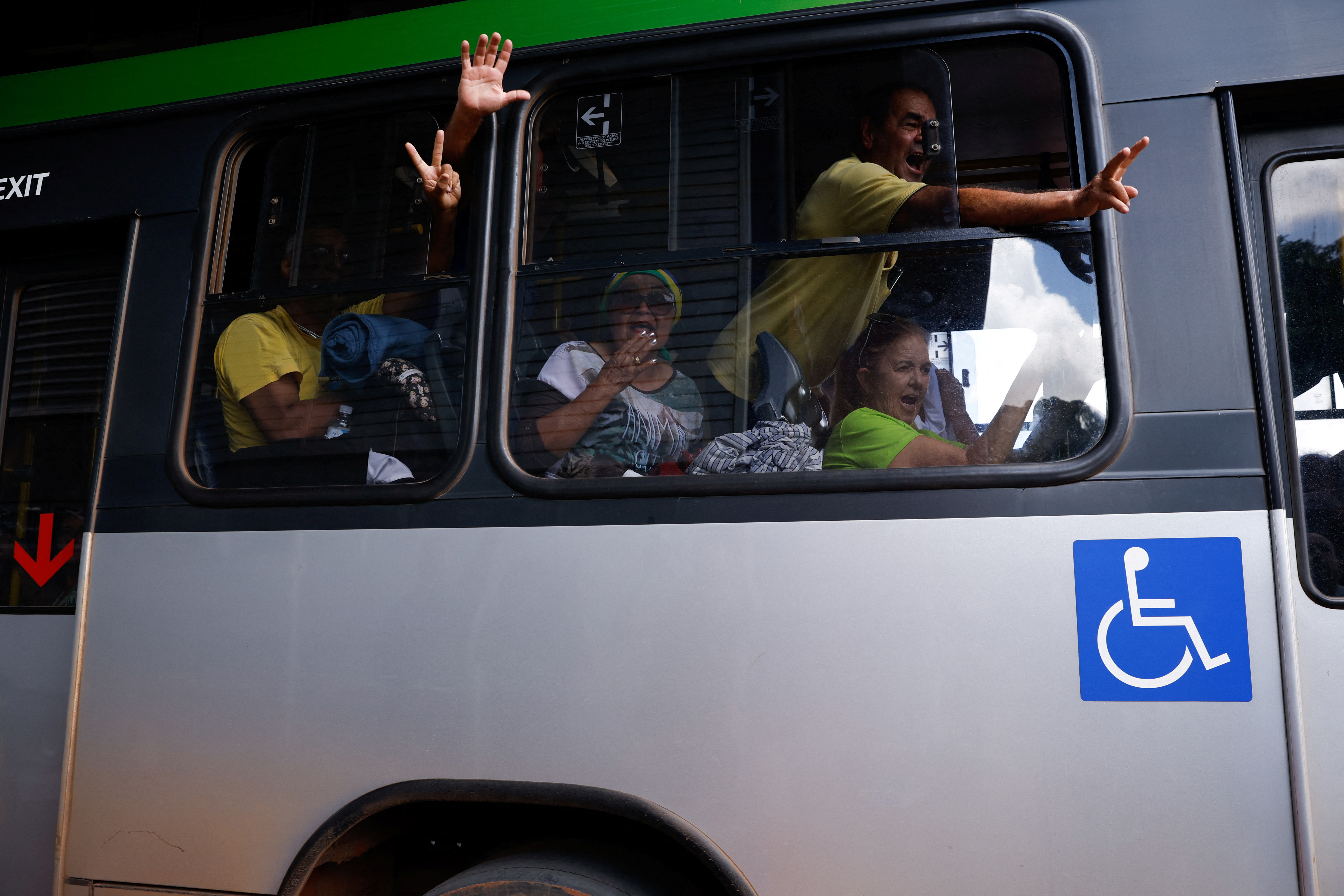 Supporters of Brazil’s former President Jair Bolsonaro react, as buses leave the National Academy of the Federal Police after a camp set by supporters was dismounted in front of the Army Headquarters, in Brasilia, Brazil, January 10, 2023. REUTERS/Amanda Perobelli 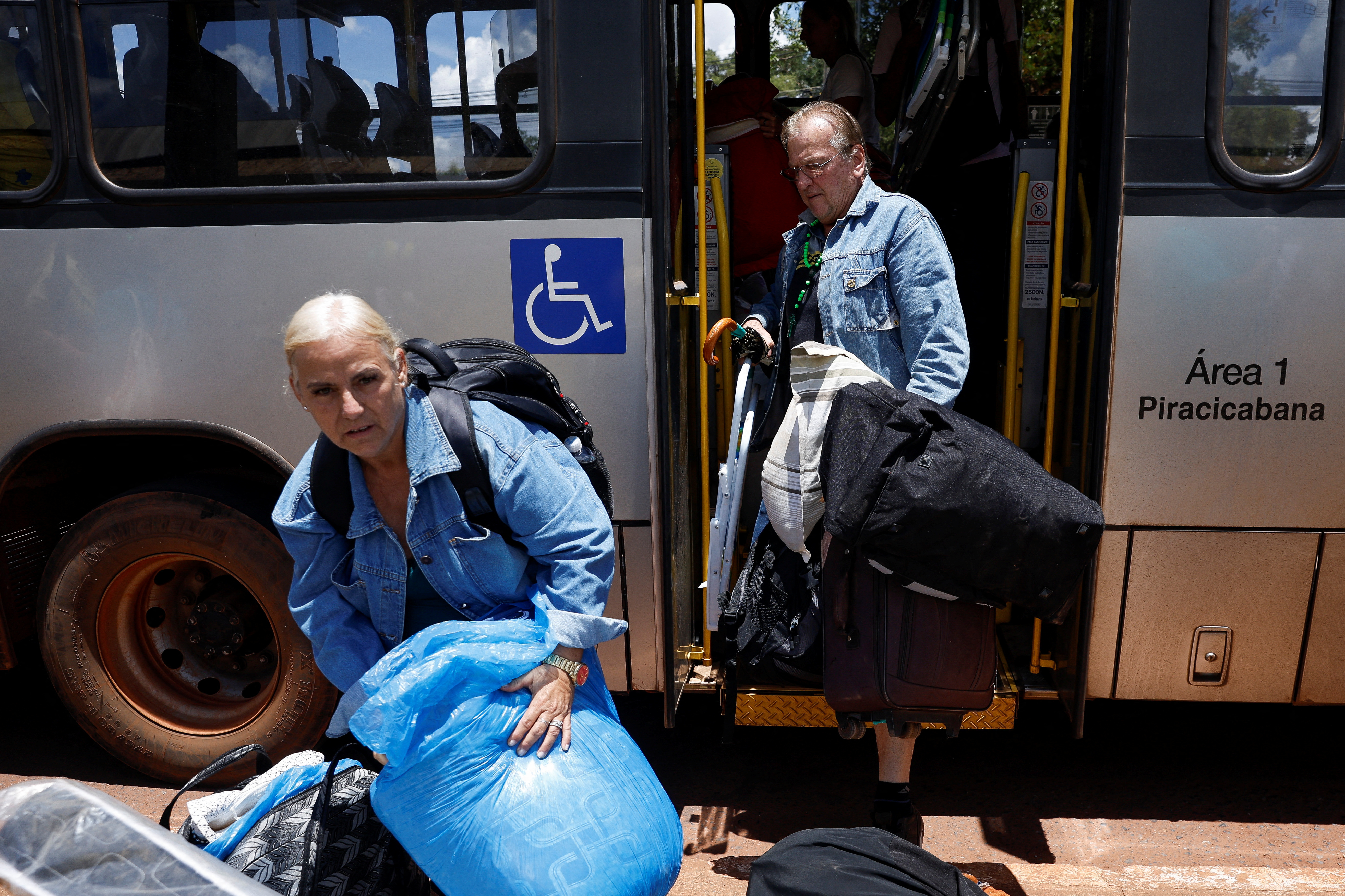 Supporters of Brazil’s former President Jair Bolsonaro who were detained leave a bus after a camp set by supporters was dismounted in front of the Army Headquarters, in Brasilia, Brazil, January 10, 2023. REUTERS/Amanda Perobelli 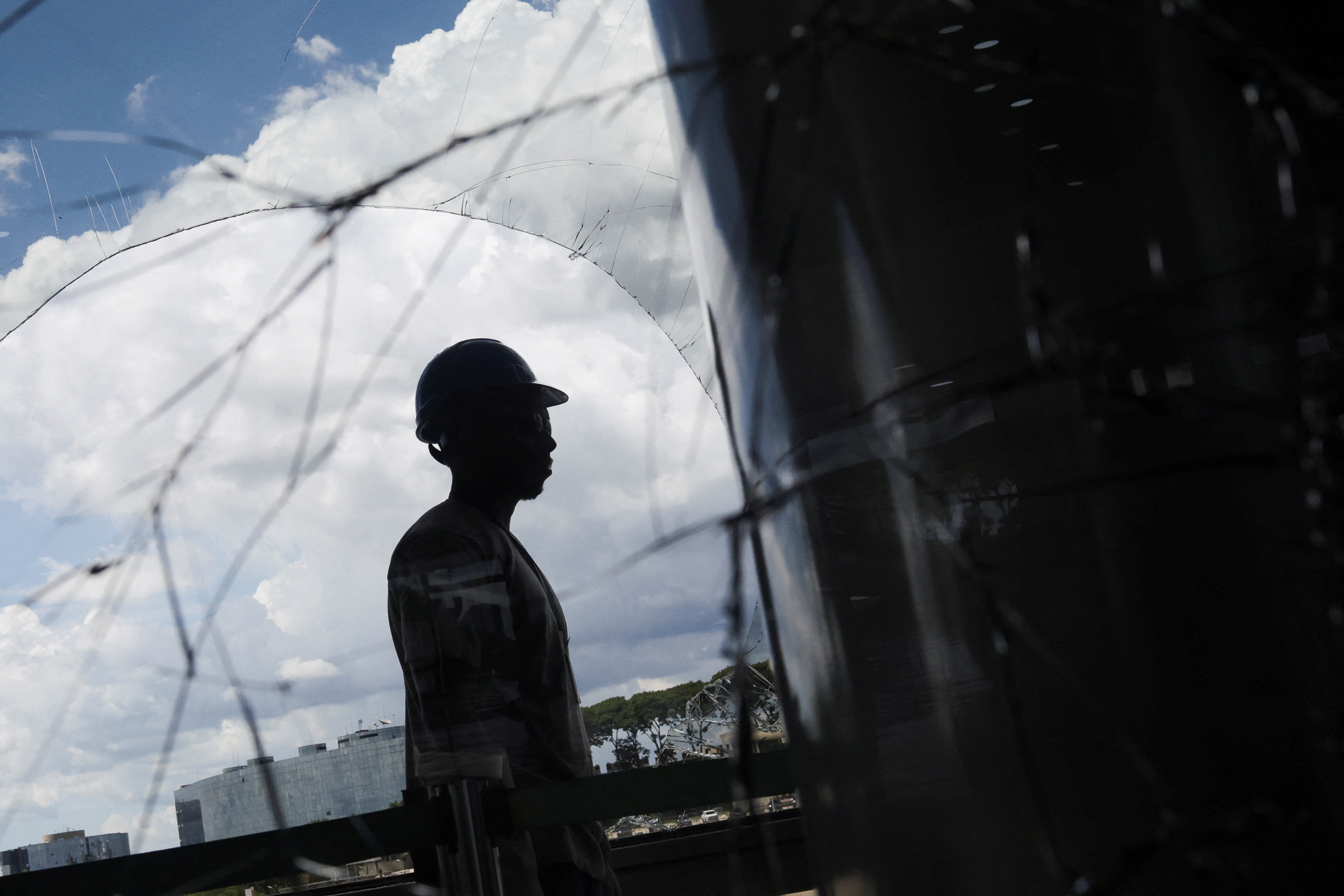