Listen to this article
2023-01-12T00:17:20Z
Northern California will on Wednesday bear the brunt of the latest Pacific storm to roll through the state, which has been battered by deadly rains and powerful winds that have chased thousands from their homes and flooded entire towns. Zachary Goelman produced this report.

While Wednesday’s deluge was relatively minor, with less rainfall and mostly contained to northwestern California, another atmospheric river was expected to drench most of the state this weekend, said Zack Taylor, a meteorologist with the National Weather Service’s Weather Prediction Center.

The parade of storms is forecast to continue, bringing even more heavy rain next week, the weather service said.

That will add to record-breaking rainfall.

Downtown San Francisco recorded a phenomenal 13.6 inches (34.5 cm) of rain from Dec. 26 until Wednesday morning, while San Francisco International Airport, the city of Oakland and the city of Stockton all recorded 16-day records over the same period, the National Weather Service said.

Large stretches of central California received over half their normal annual rainfall since Dec. 26.

Atmospheric rivers are characterized by dense moisture funneled into California from the tropical Pacific.

Gusts of wind were shaking trees and rainfall was consistent throughout the morning along the coast of Mendocino County, about 160 miles (260 km) north of San Francisco. Large trees toppled and debris were left behind by a wild ocean. The toll was evident along Highway 1, with utility trucks deploying toward power outages.

Dozens of roadways across the state were made impassable by mudslides and snow as the state’s department of transportation on Wednesday strongly urged drivers to stay off the roads until crews could clear the way.

The storms have killed at least 17 people since the start of the year, California Governor Gavin Newsom said on Tuesday.

Another victim was found on Wednesday morning, when rescue workers in Sonoma County found a car 100 yards (meters) off a roadway submerged in about 10 feet (3 meters) of floodwater with a dead 43-year-old woman inside, officials reported.

In Mendocino County, a 68-year-old woman died when she was struck by a tree that fell into her home as she slept, and the 37-year-old driver of a tree service boom truck was killed when his vehicle left the roadway and rolled several times, the sheriff’s department said.

The search for a five-year-old boy who was swept away by raging floodwaters near San Miguel, a small village in Central California, continued on Wednesday, the local sheriff’s department said.

Wind gusts have downed powerlines, knocking out electricity to 54,000 homes and businesses as of Wednesday afternoon, according to data from Poweroutage.us, down from nearly half a million outages over the weekend.

Many of the evacuation orders issued across the state have been rescinded, but not in the rural town of Planada in Central California where neighborhoods and businesses remained underwater.

The rain has helped alleviate but has not ended a two-decade drought. Statewide reservoir storage is only 82% of average for this time of year, the state Department of Water Resources said, warning that the remainder of the rainy season could underperform and result in a lower than average rainfall year. 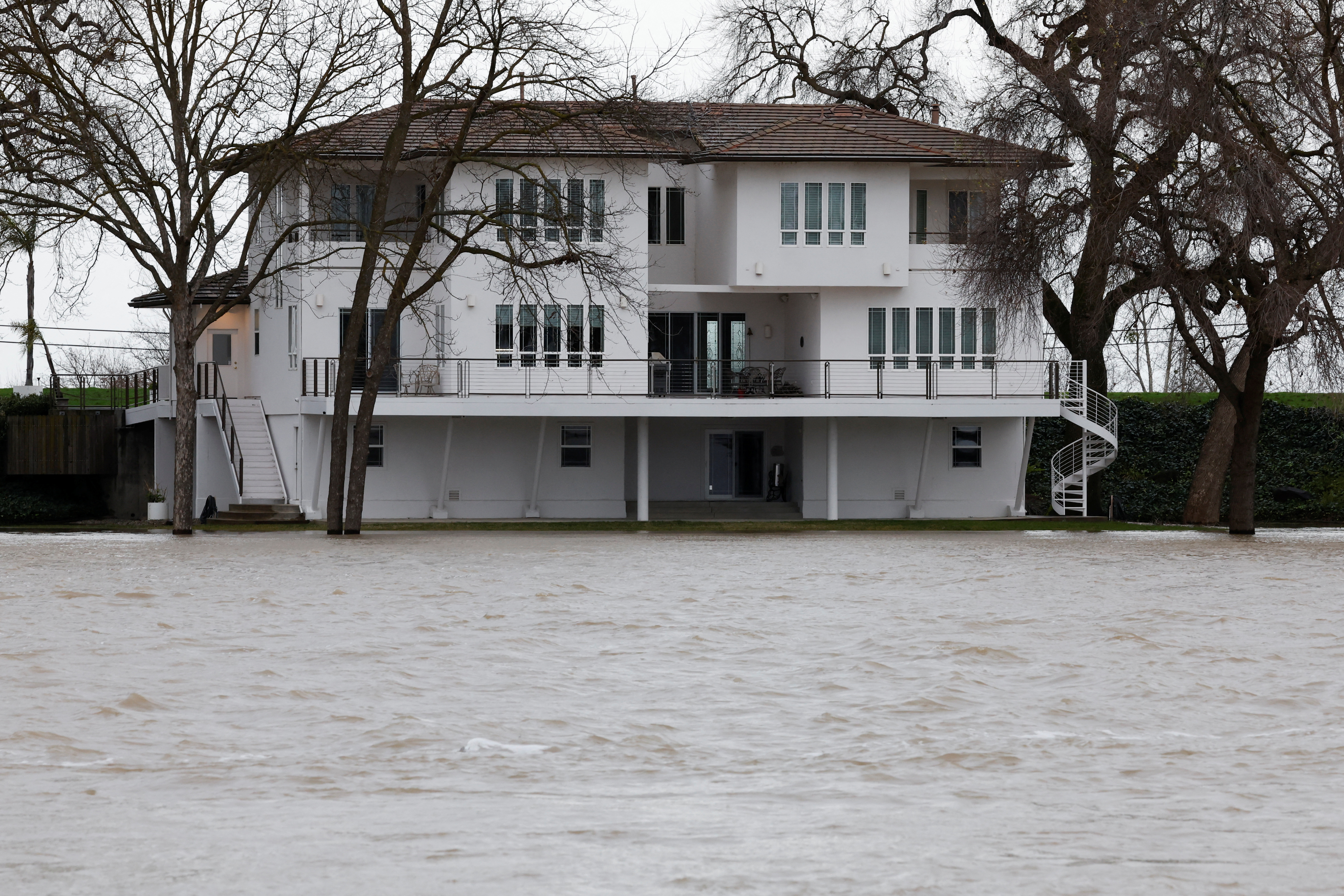 The rain-swollen Sacramento River rises to the foundation level of homes along the river in West Sacramento, California, U.S. January 11, 2023. REUTERS/Fred Greaves 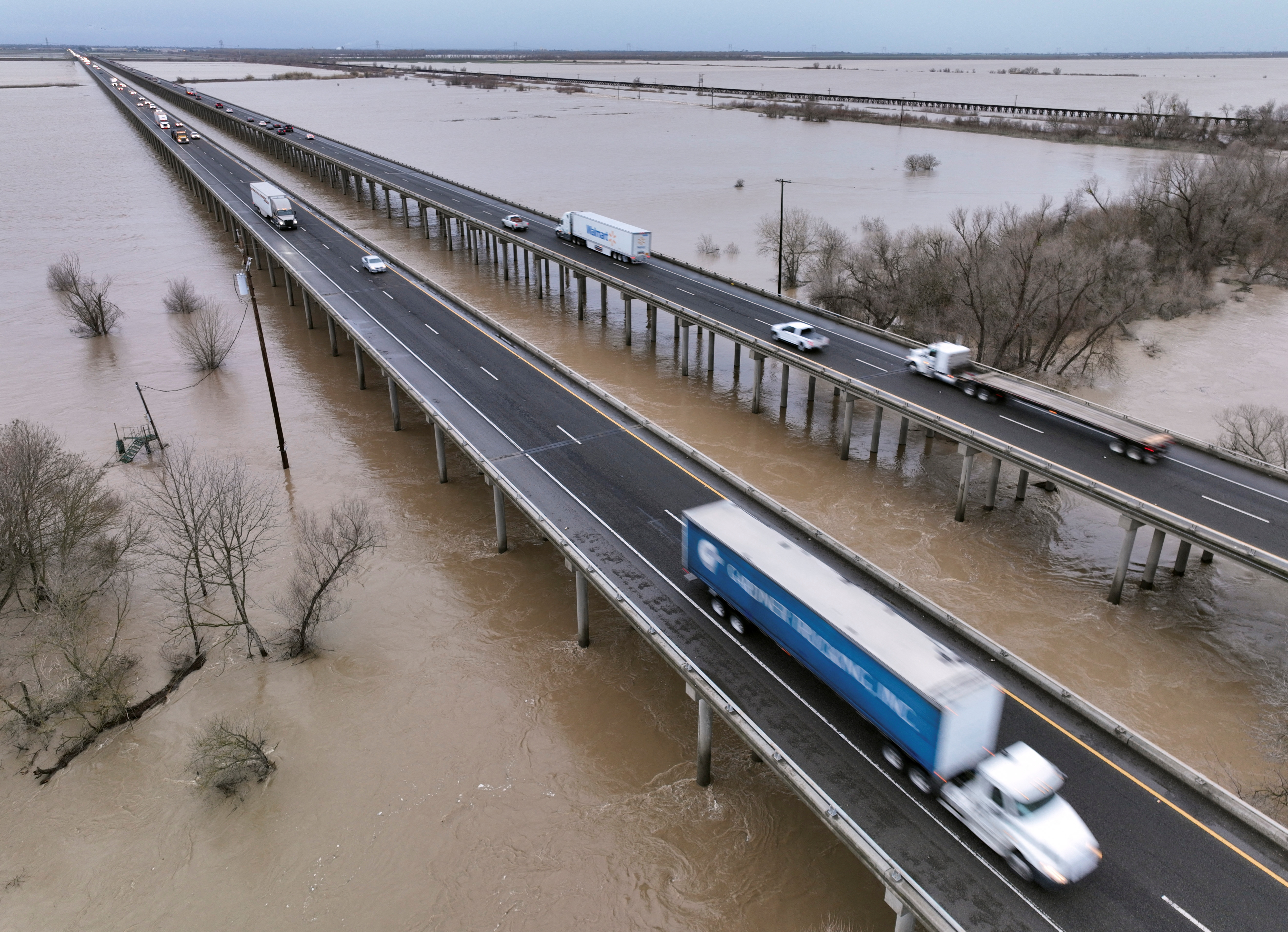 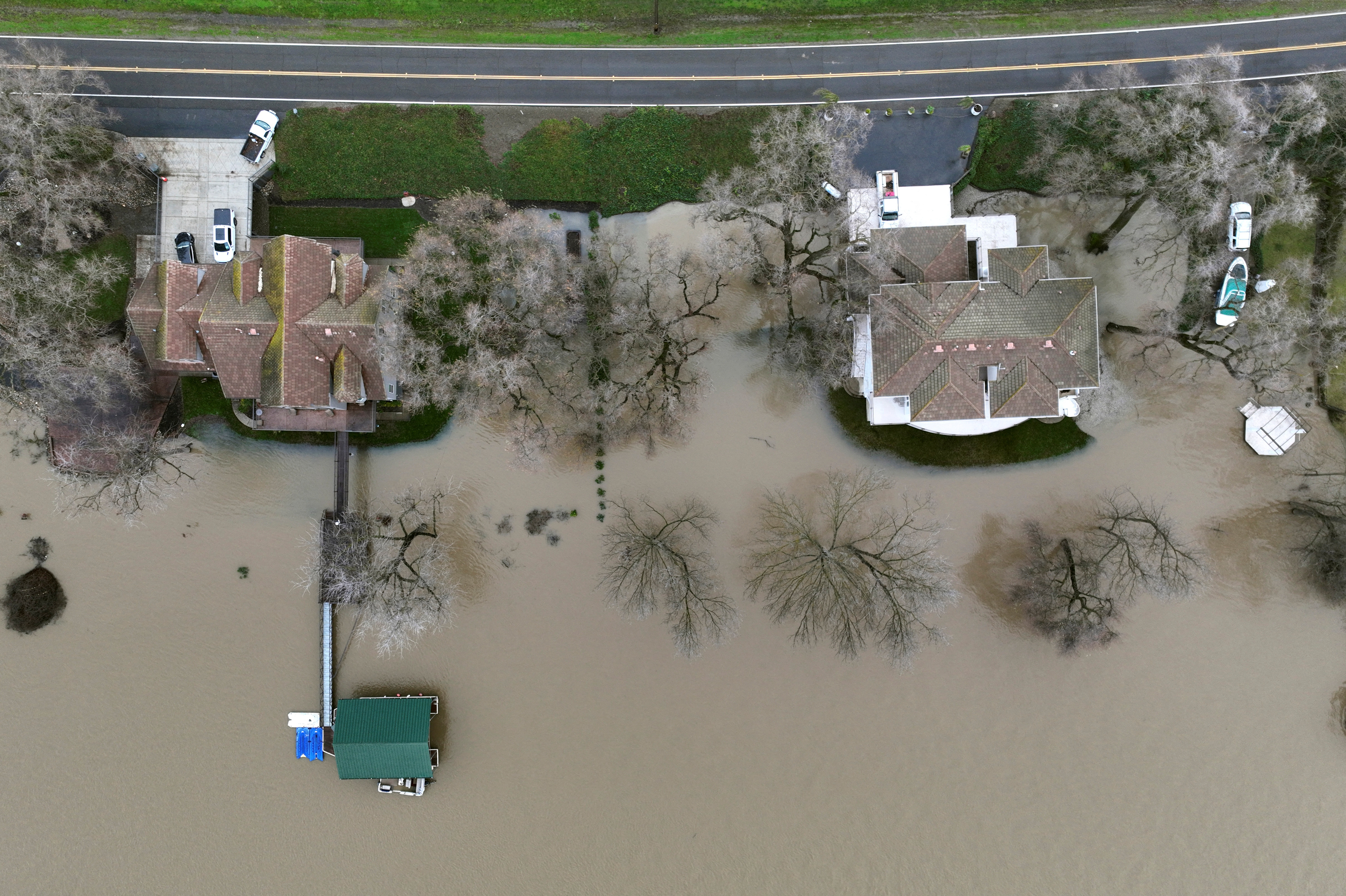 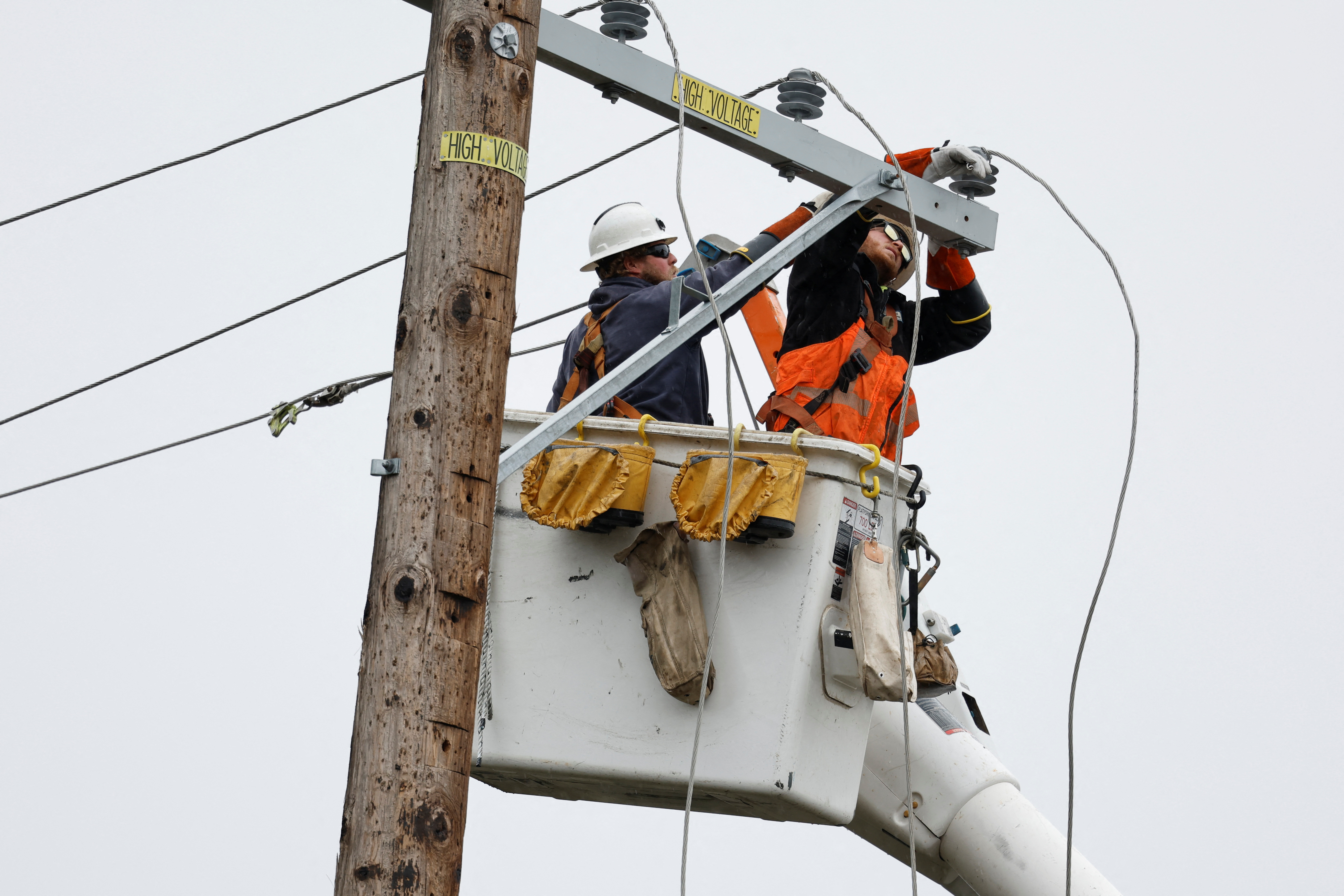 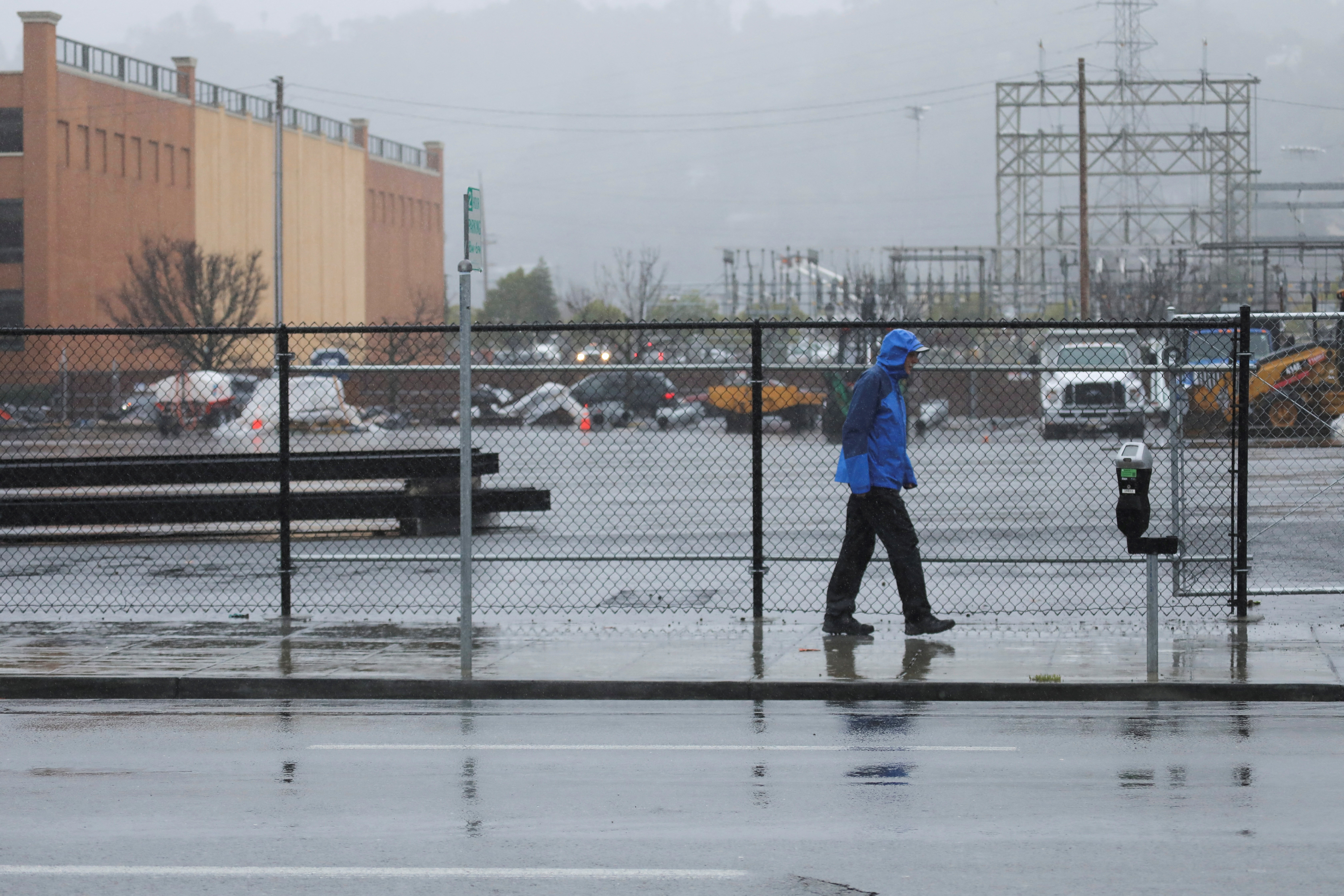 A man walks in the rain during a recent string of storm systems in San Rafael, California, U.S., January 11, 2023. REUTERS/Nathan Frandino 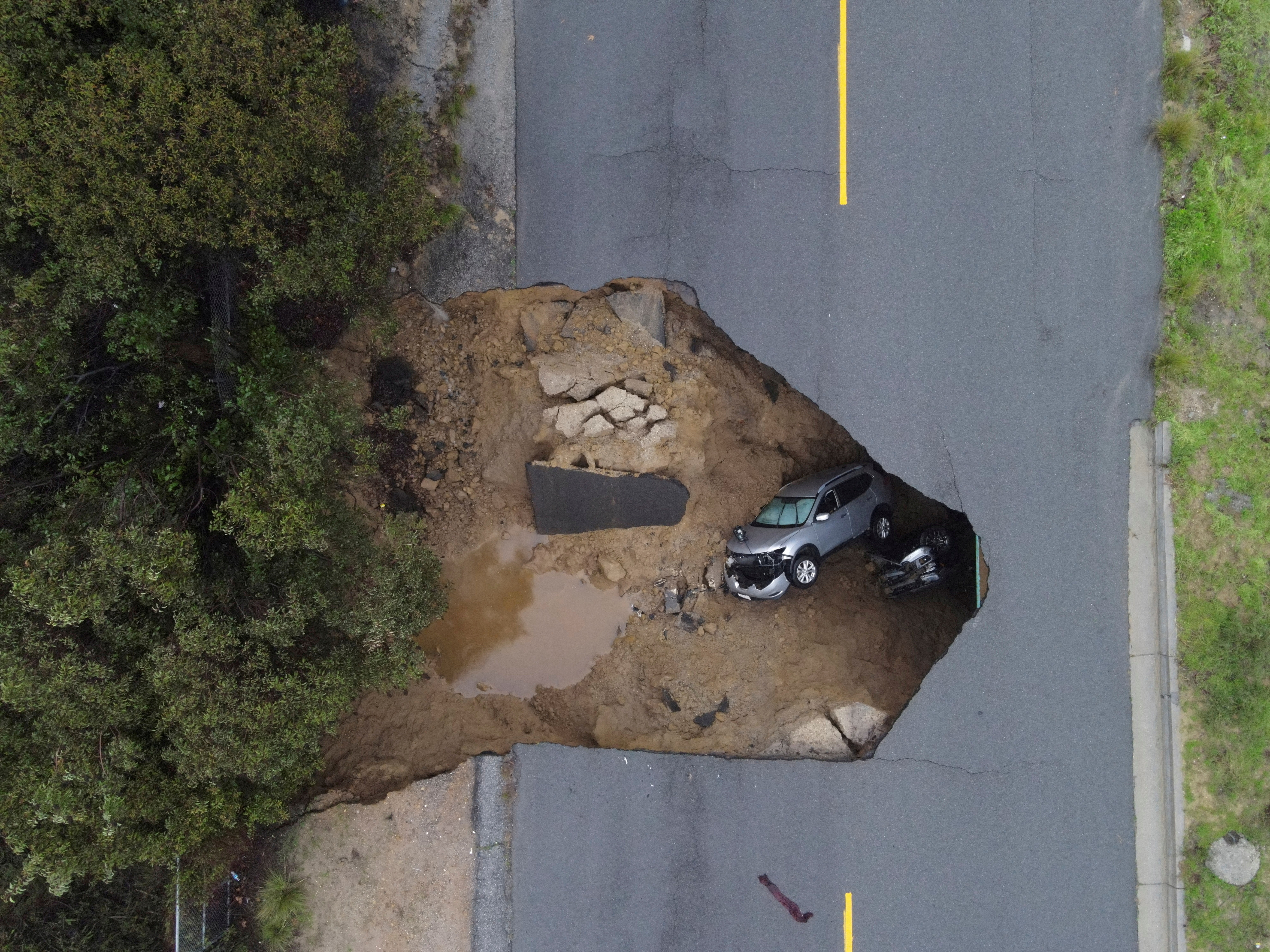 Several people had to be rescued after two vehicles fell into a sinkhole in Chatsworth, California, U.S., January 10, 2023. REUTERS/David Swanson 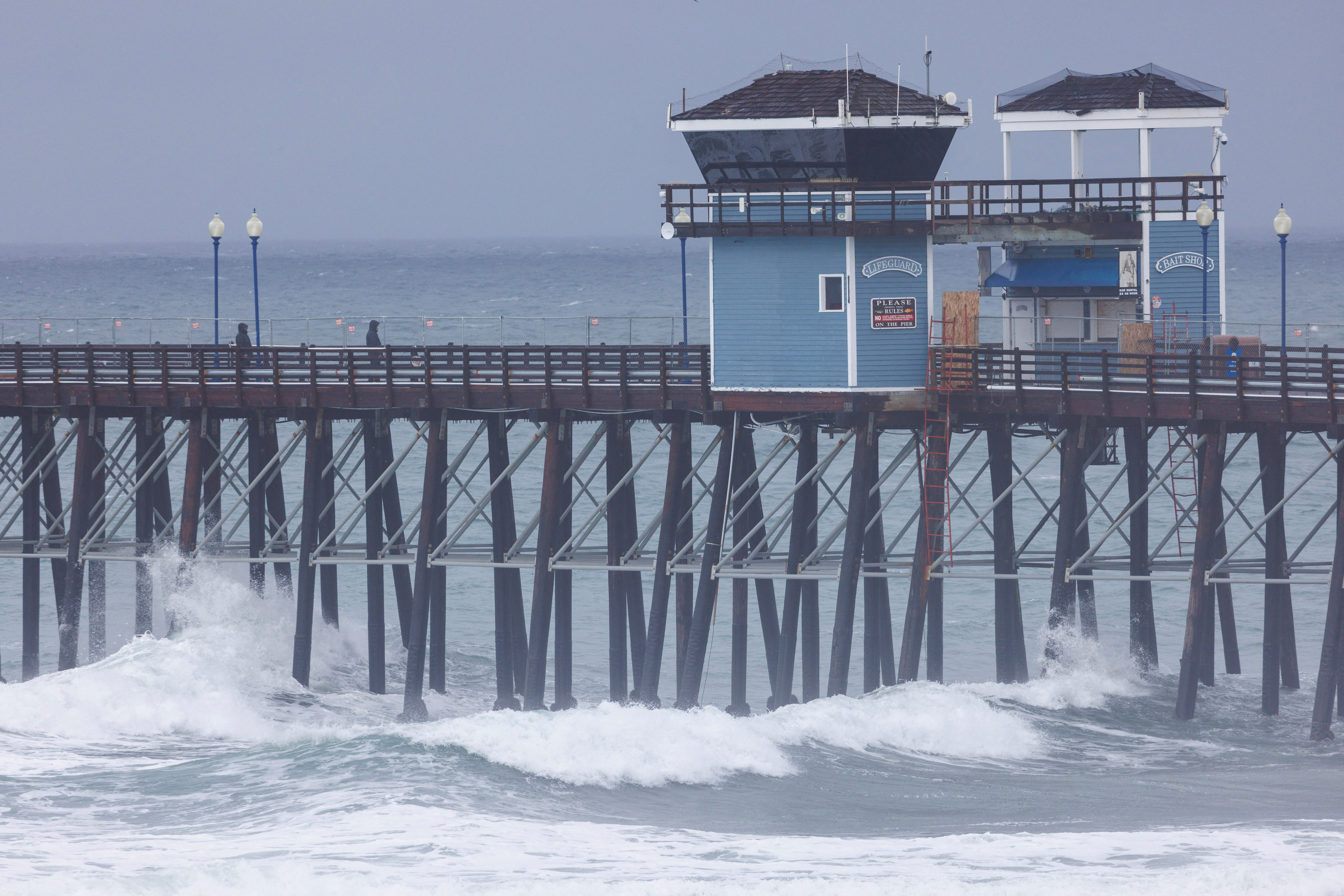 People walk along the pier during a winter storm in Oceanside, California, U.S., January 10, 2023. REUTERS/Mike Blake