Peruvian ex-President Pedro Castillo’s pre-trial detention in prison was extended to 18 months on Thursday, amid a deepening diplomatic spat with left-leaning countries opposed to his removal and as deadly protests extended into a second week.

At least 15 people have been killed in the protests, according to statements from authorities.

A judicial panel within the Supreme Court ordered the extended period of pre-trial detention for Castillo as prosecutors continued an investigation into criminal charges against him.

The decision did not touch on the merits of accusations faced by Castillo, who has been charged with rebellion and conspiracy, but a Supreme Court judge heading up the panel cited the risk of flight by the deposed president.

Castillo has denied all the charges and has said he remains the country’s lawful president.

Protesters gathered outside the jail where he was detained, holding up banners criticizing new President Dina Boluarte and calling for Congress to be shuttered.

“We only want the voice of the people to be heard. The people are demanding that they bring back our president,” said protester Gloria Machuca.

Protests have threatened logistics at major copper mines and led to a curfew being declared across swaths of the Andean country.

The leftist Castillo, a former teacher and son of peasant farmers, won a narrow election victory last year running under the banner of the Marxist Free Peru party. He was removed by an overwhelming vote of lawmakers who accused him of “permanent moral incapacity” just hours after he ordered the Congress dissolved on Dec. 7.

A bloc of left-wing countries meeting in Havana, including Cuba, Bolivia, Venezuela and Nicaragua, also backed the jailed Castillo, rejecting what they described as “the political framework created by right-wing forces.”

Gervasi wrote on Twitter that the consultations “relate to interference in the internal affairs of Peru.”

She did not specify when the talks would take place or what other actions Boluarte’s government might take.

Peru’s constitution allows a president to shut down Congress, but only if lawmakers twice approve motions of no confidence in the president’s Cabinet, which did not happen on the day of his ousting last Wednesday.

Boluarte’s week-old administration, which she has said will be a transitional government, has been recognized by Chile’s leftist president and by Uruguay, Costa Rica, Ecuador, Canada and the United States.

Protesters continued to block roads on Thursday, despite the government’s enacting a state of emergency a day earlier. That granted special powers to the armed forces and police and limited citizens’ freedoms, including the right to assembly.

The public ombudsman, saying the armed forces had used firearms and dropped tear gas bombs on protesters from helicopters, demanded the practices be immediately stopped.

The political crisis is presenting a risk to production at major copper mines in the Andean nation, the world’s second-largest producer of the metal. Highway blockages, particularly in key mining regions in the south, have begun to complicate supply to and from mines, such as MMG’s (1208.HK) huge Las Bambas mine, which produces some 2% of the world’s copper.

Other major mine operators in Peru include Anglo American (AAL.L) and a partnership of BHP (BHP.AX) and Glencore (GLEN.L) on the vast Antamina deposit.

Late on Thursday, the government imposed a curfew on 15 local provinces, mostly in rural Andean regions.

Local television showed a line of dozens of vehicles stranded on the side of a key coastal highway south of Lima and hundreds of protesters placing stones on roads in the regions of Puno and Arequipa and the tourist hub of Cusco.

The protests have also stranded dozens of tourists, including children, in a remote mountain town.

A large union, the General Confederation of Workers, weighed in with a call for a “day of fighting,” as protesters demanded immediate elections and the resignation of Boluarte.

In a post on Twitter before the pre-trial detention ruling came down, Castillo blasted a meeting between the U.S. ambassador to Peru and the presidential palace. Without citing evidence, he said it had led to the order to deploy troops and the “massacre my defenseless people.” 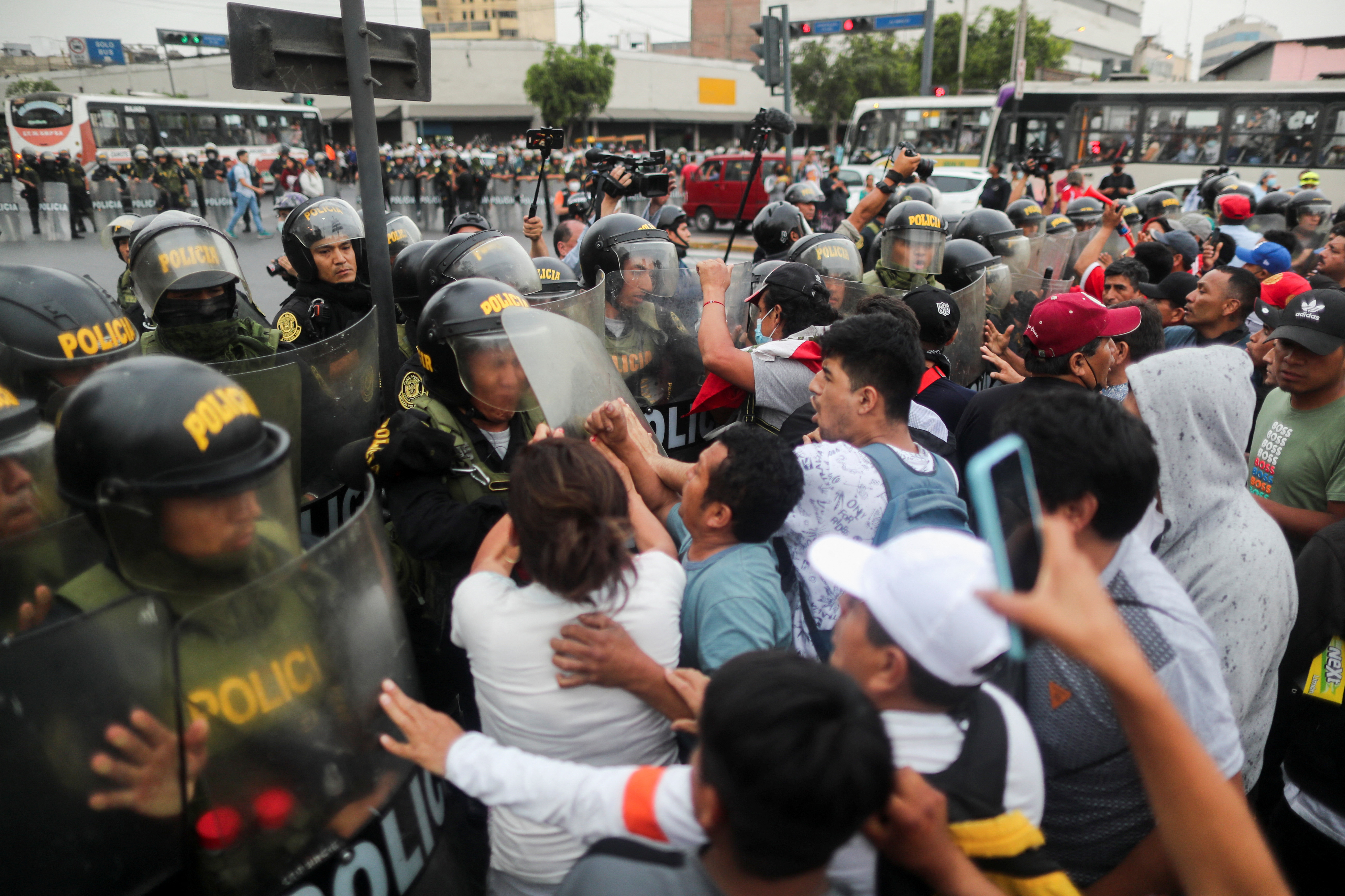 Demonstrators clash with police during a protest after the government announced a nationwide state of emergency, following a week of protests sparked by the ousting of former President Pedro Castillo, in Lima, Peru December 15, 2022. REUTERS/Sebastian Castaneda 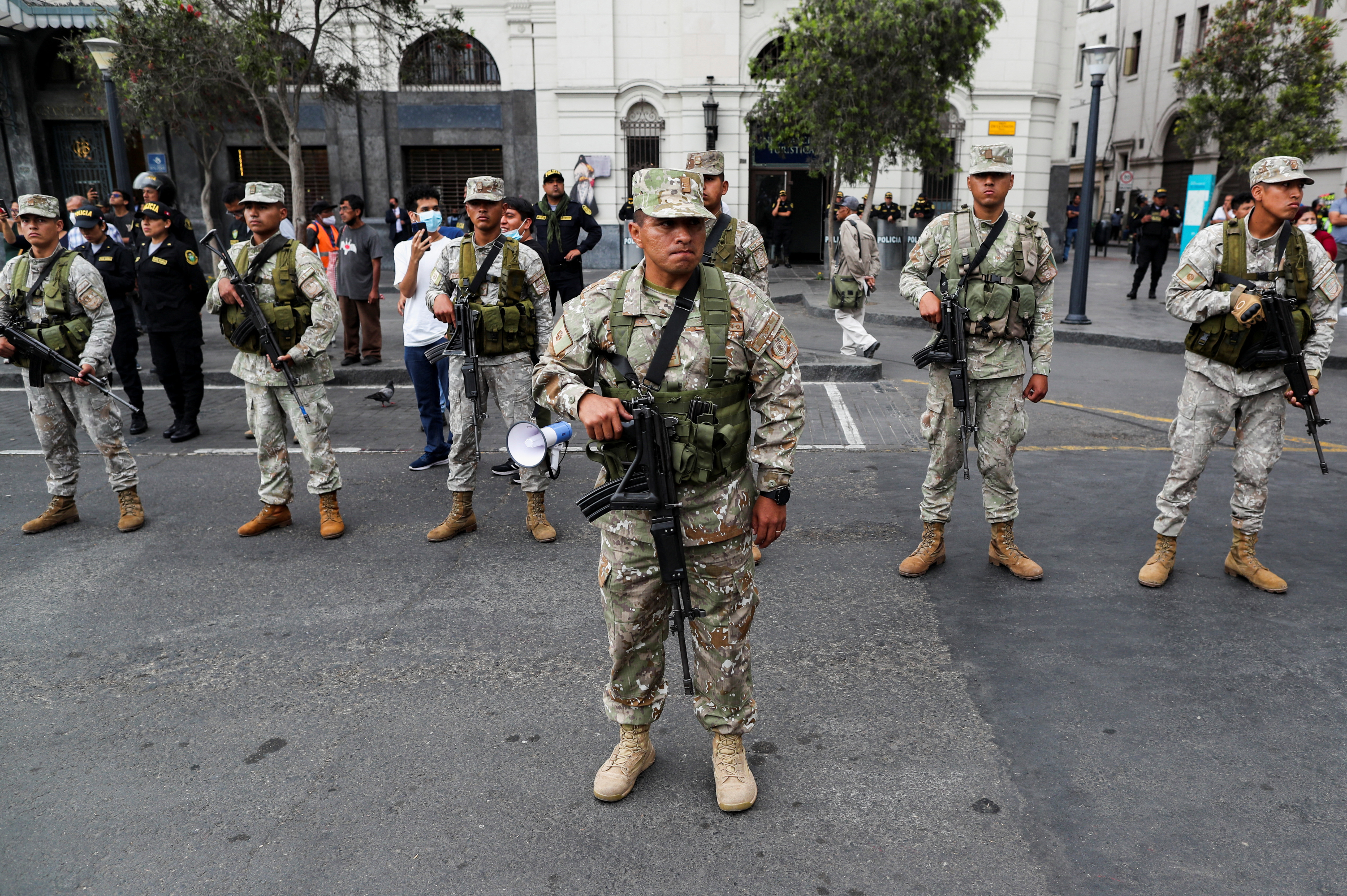 Members of the Military stand guard, as supporters of Peru’s former President Pedro Castillo gather outside the police prison where Castillo is being held, prosecutors said they were seeking 18 months of pretrial detention for Castillo, in Plaza San Martin, Lima, Peru December 15, 2022. REUTERS/Sebastian Castaneda 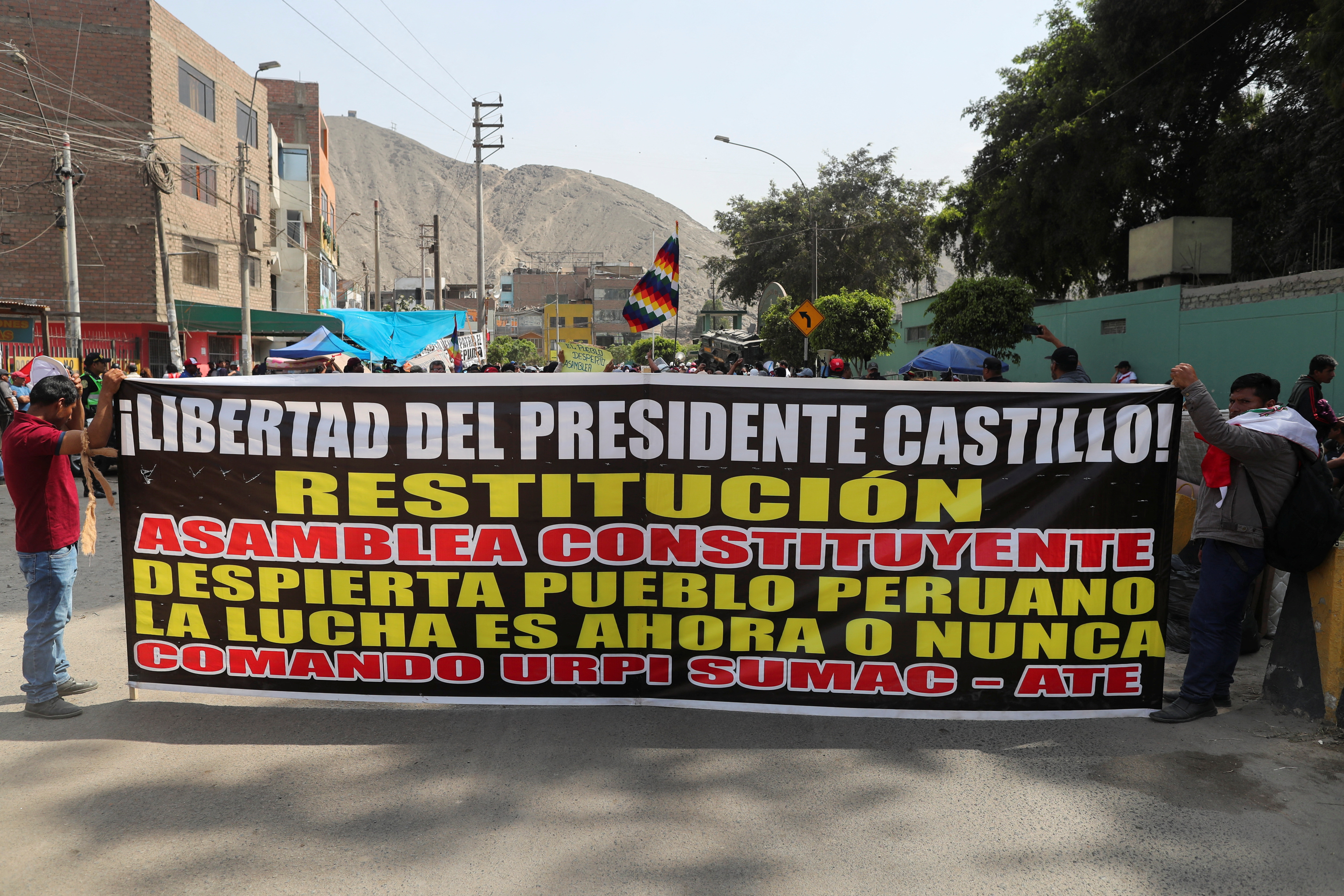 Supporters of Peru’s former President Pedro Castillo hold a banner reading “Freedom for President Castillo, Restitution, Constituent Assembly” as they gather outside the police prison where Castillo is being held, in Lima, December 15, 2022. REUTERS/Sebastian Castaneda 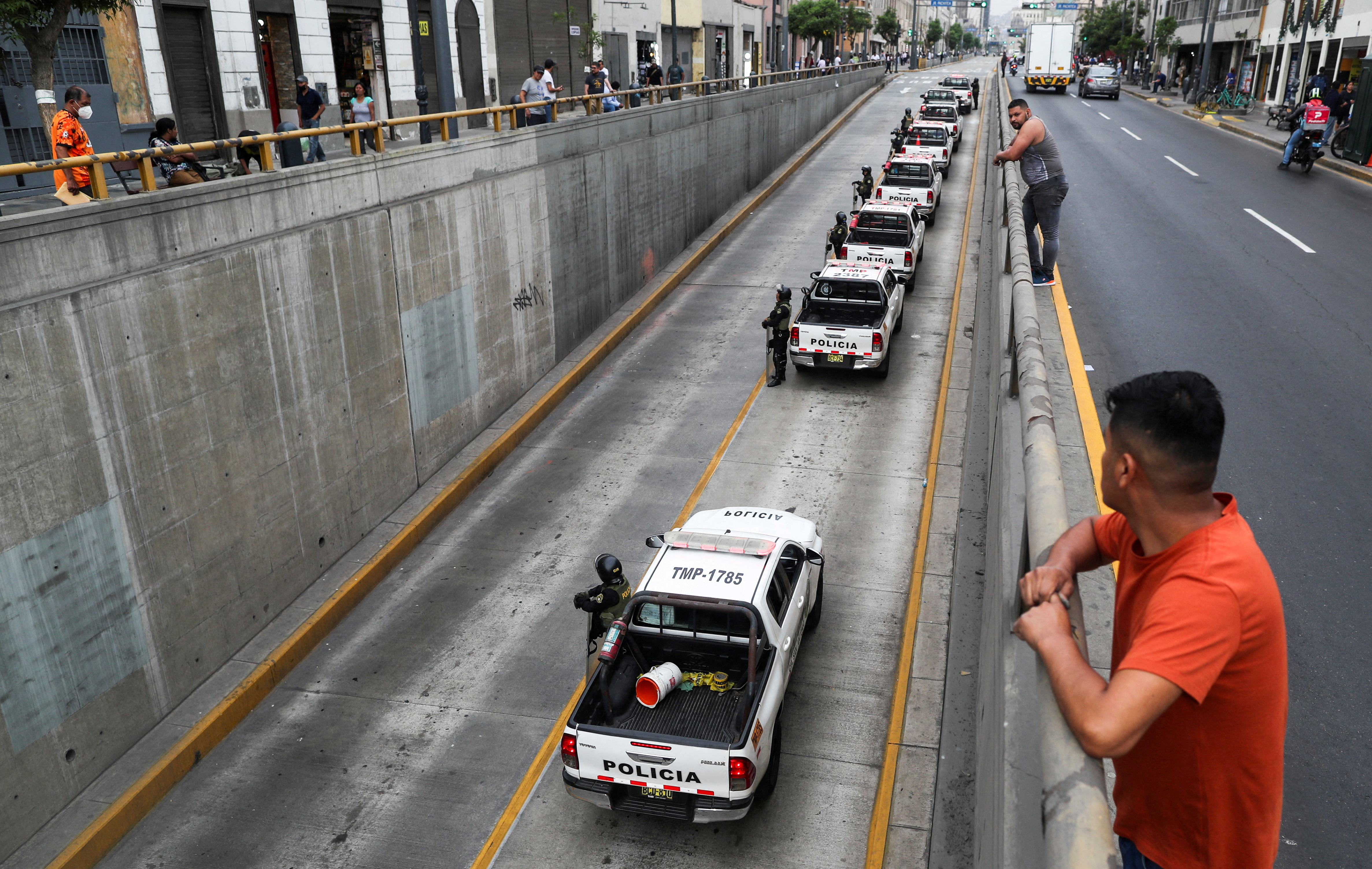 Police officers stand guard as the government announced a nationwide state of emergency following a week of protests sparked by the ousting of former President Pedro Castillo, in Lima, Peru December 15, 2022. REUTERS/Sebastian Castaneda 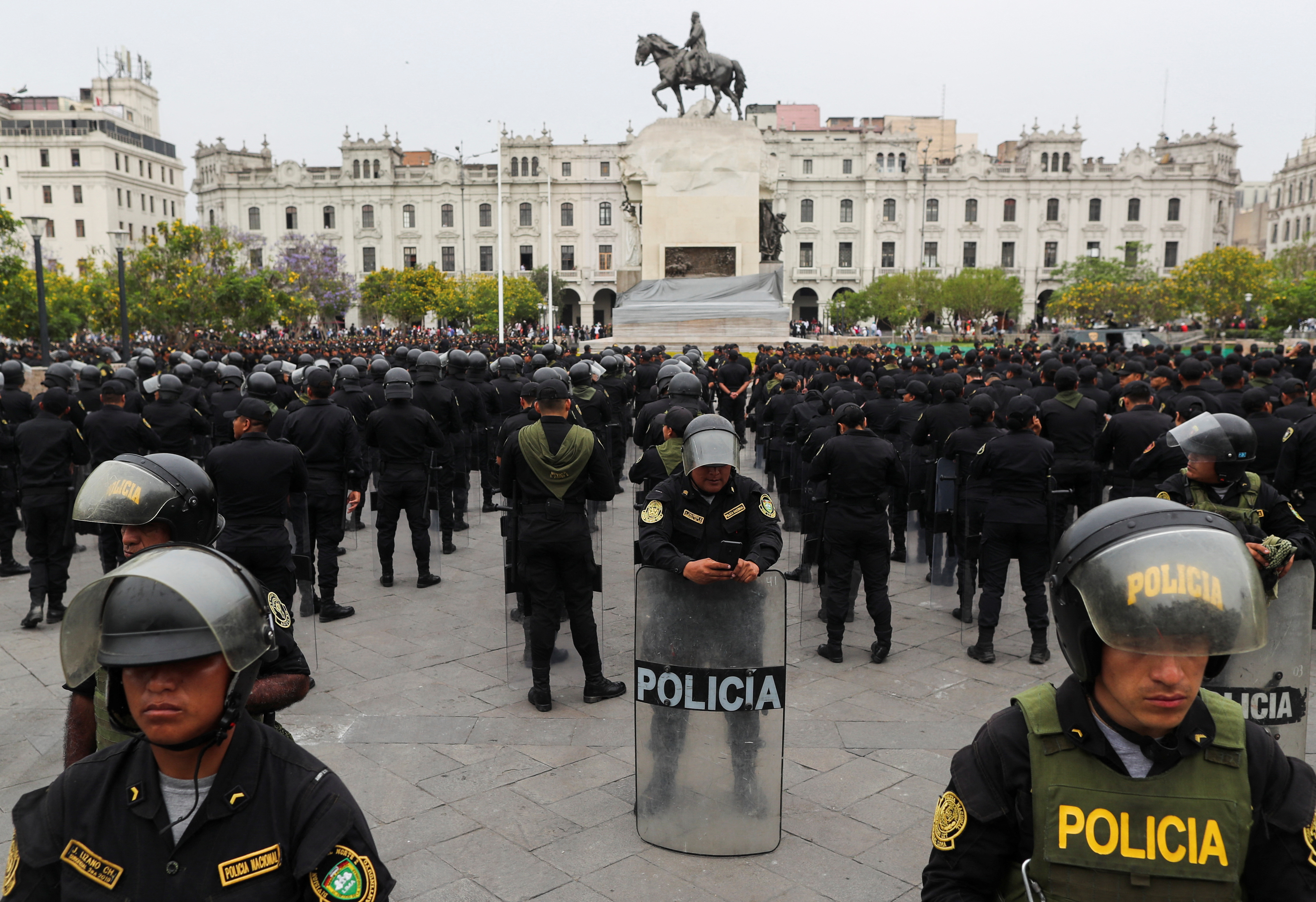 Police officers stand guard while supporters of Peru’s former President Pedro Castillo gather outside the police prison where Castillo is being held, as prosecutors said they were seeking 18 months of pretrial detention for Castillo, in Lima, December 15, 2022. REUTERS/Sebastian Castaneda 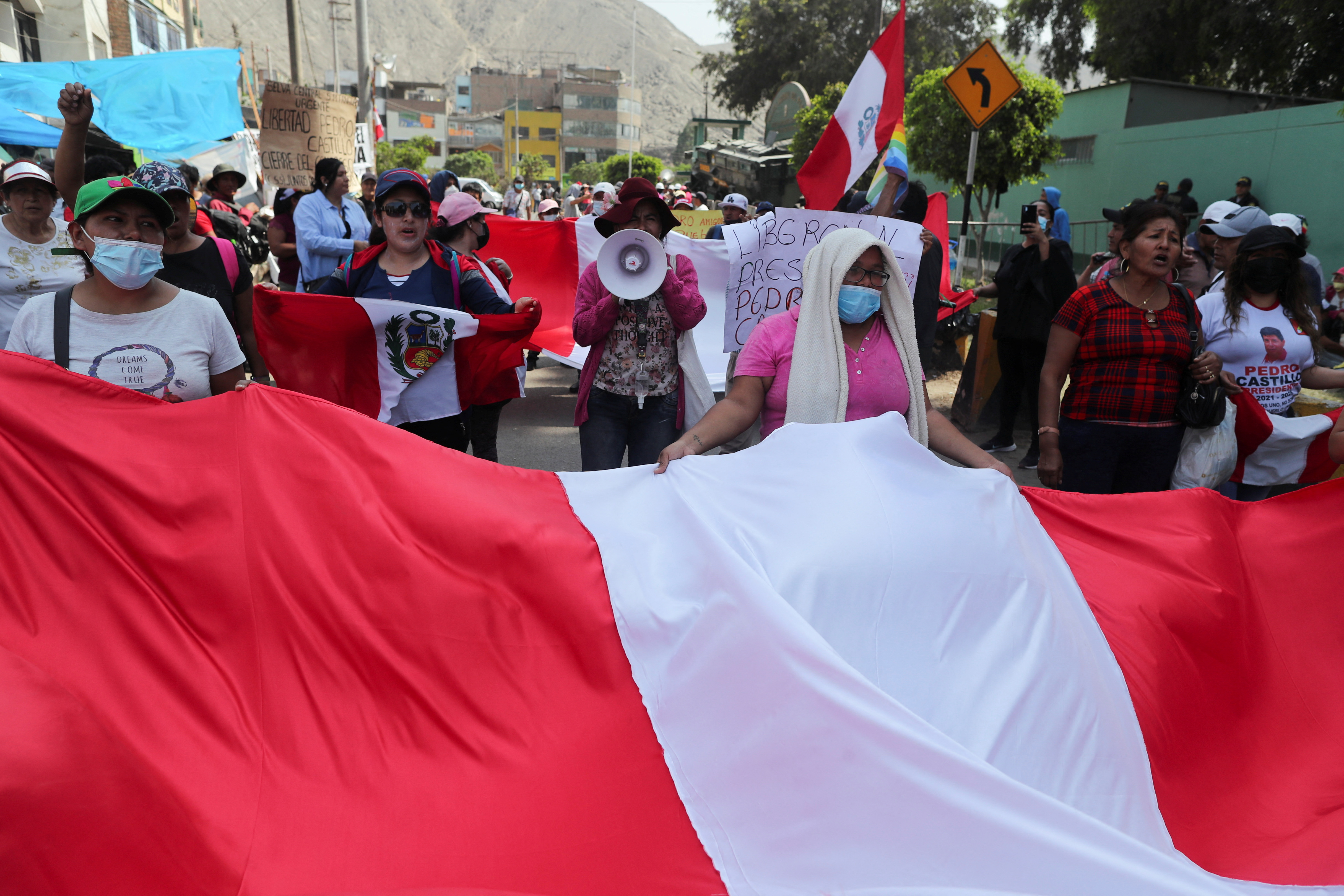 Supporters of Peru’s former President Pedro Castillo gather outside the police prison where he is being held, in Lima, December 15, 2022. REUTERS/Sebastian Castaneda