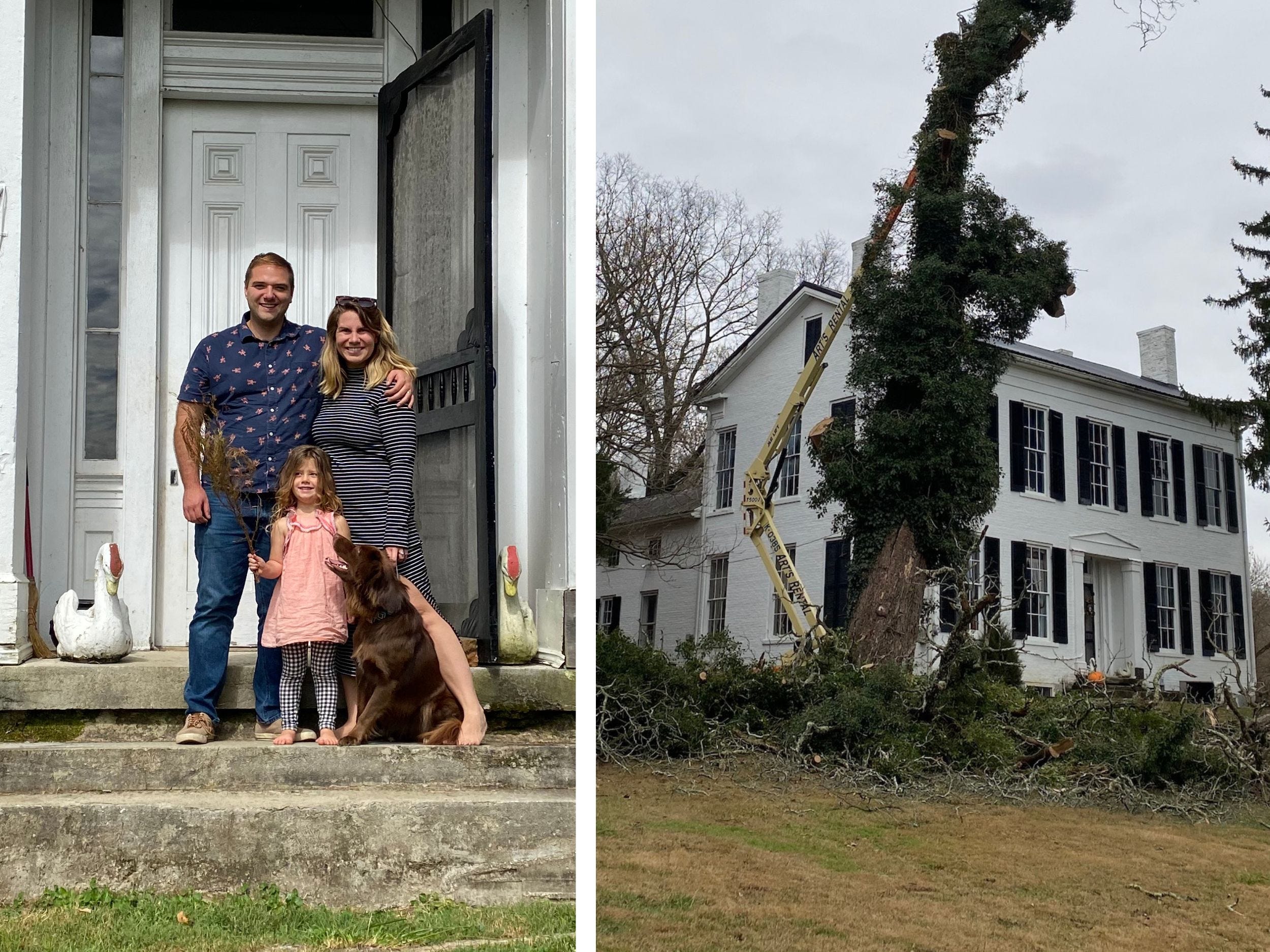 The Angeleauxs plan to restore Walnut Hill, an Ohio manor they found on the Cheap Old Houses newsletter.

This as-told-to essay is based on a conversation with Kayli Angeleaux, 31, about her decision to purchase a historic fixer-upper in Higginsport, Ohio, about an hour from Cincinnati. She found it via Cheap Old Houses, an Instagram account and newsletter started by Elizabeth and Ethan Finkelstein that spotlights homes for sale across the country and abroad that are, mostly, less than $150,000. 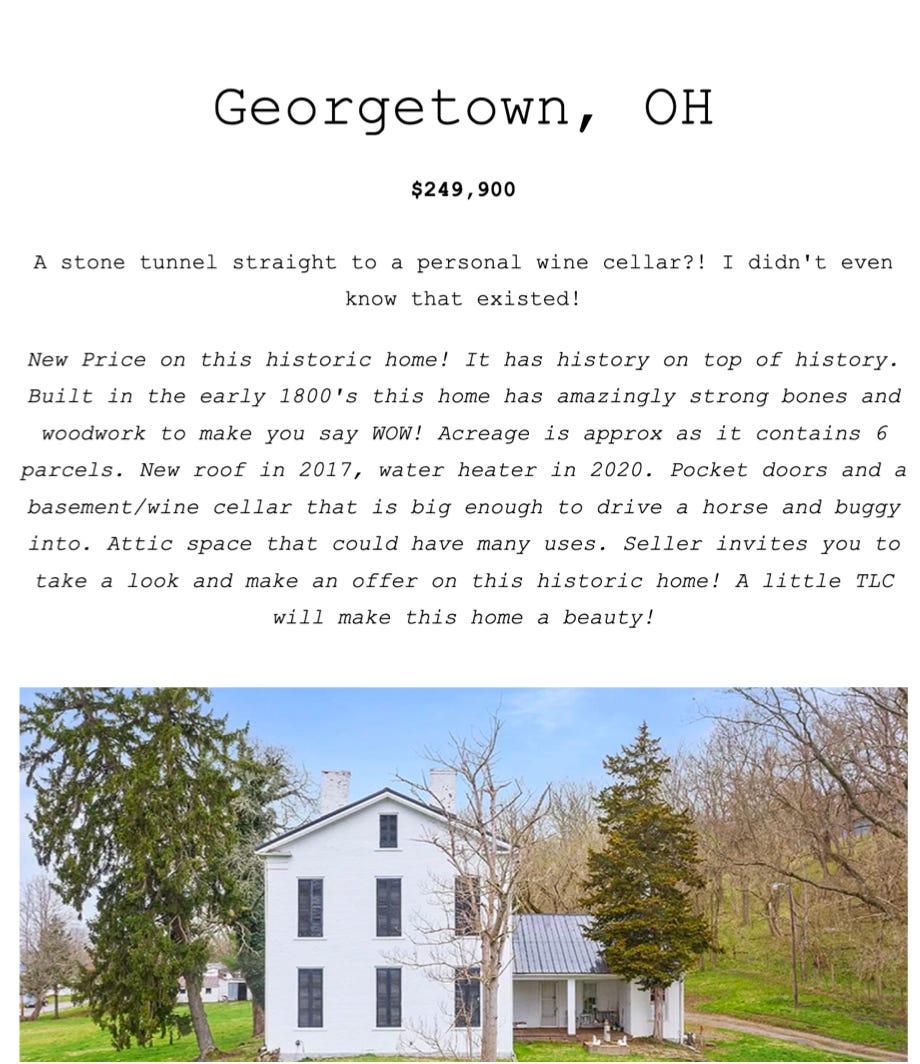 The Cheap Old Houses newsletter listing for the house the Angeleauxs purchased.

Angeleaux and her husband Connor, 29, are chronicling the intense restoration process on YouTube. The conversation has been edited for length and clarity.

I was on the Cheap Old Houses Instagram, and I spent way too much time on there. When I quit social media, I knew I had to have my fix. So I got on their email newsletter.

We were living in an apartment in Utah at the time. My husband and I agreed that we weren’t going to leave that apartment until we bought a house. Nothing in Utah was anywhere close to what we could afford.

And then on May 11, 2022, I got the Cheap Old Houses email. We saw the pocket doors, and knew there was something special here.

I’ve been dreaming about owning a historic home for probably the past 21 years. I read a lot of historical fiction when I was young, and I fell in love with it through that. At 10, obviously, I didn’t know what that really meant. But I knew the aesthetic that I wanted, down to the Federal-style white house with the symmetrical windows.

So when I saw it pop up, it just screamed ‘home’ to me. 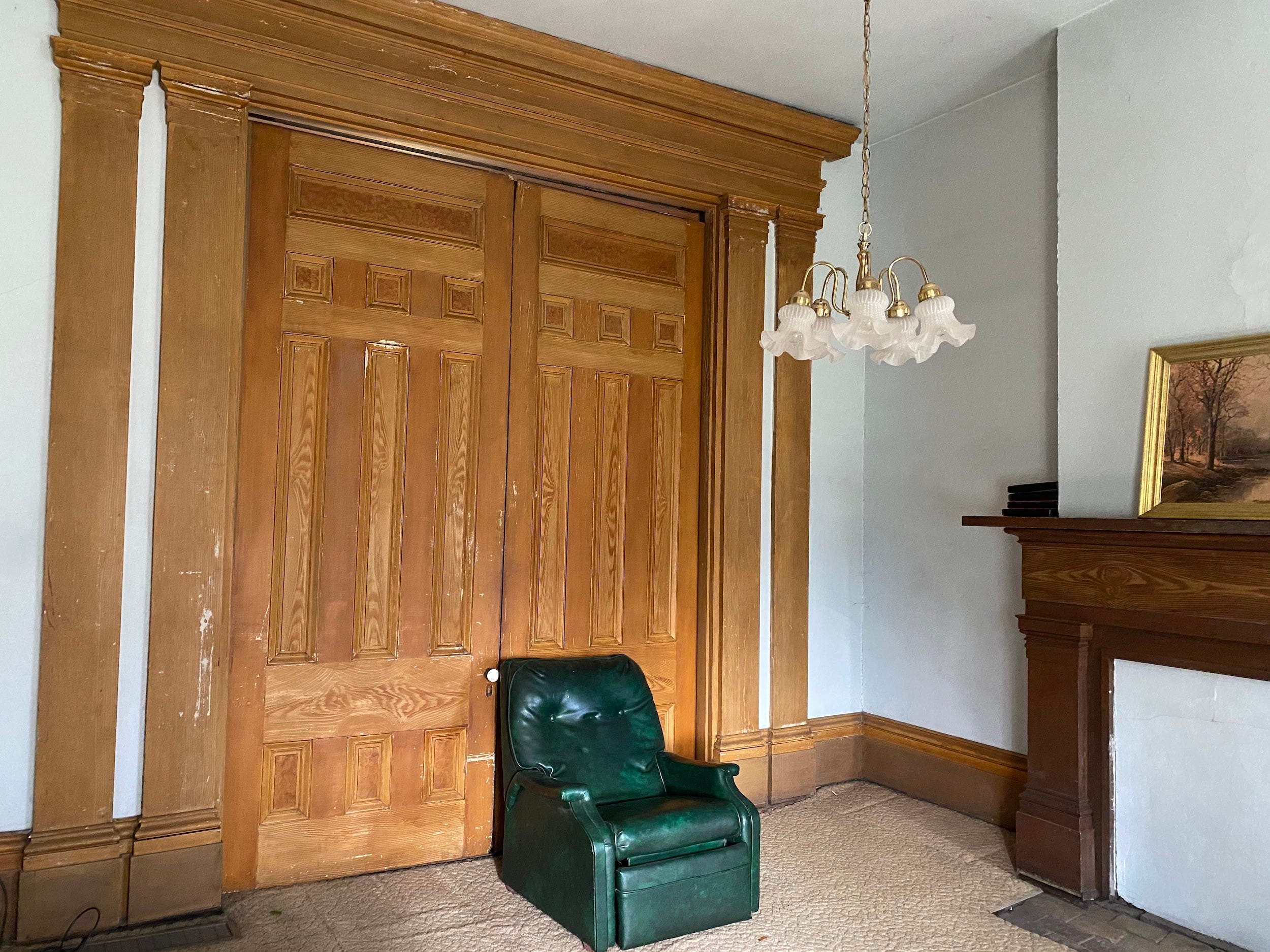 I reached out to the listing agent that day just to see if it was still available — I was sure somebody had already bought it — and it was.

There were several reasons for the discount. The first is there’s a ton of very expensive work to do. The structure needs to be completely redone.

Higginsport is a tiny, tiny thing on the map. There are really no businesses. There’s one restaurant and a tiny post office that’s open for a couple hours. So not a lot of people are looking for that kind of town.

The Angeleauxs weren’t even considering Ohio

At the time, we were actually looking at homes in Kentucky, so we didn’t even have a local agent in Ohio. All that realtors in Kentucky were able to send us in our price range was trailers, and that just wasn’t what we wanted.

Cincinnati is the closest big city to the house. All we knew about Cincinnati was that it had hills. We would be okay with moving from Utah because at least we would have some good topography. We were very concerned about not having mountains anymore.

We started scrambling and found an agent in Ohio, and got her out there for a FaceTime walkthrough. We entered the buying process sight unseen, after just the blurry FaceTime. They had taken fantastic pictures for the listing and the inspections showed us every nasty corner. 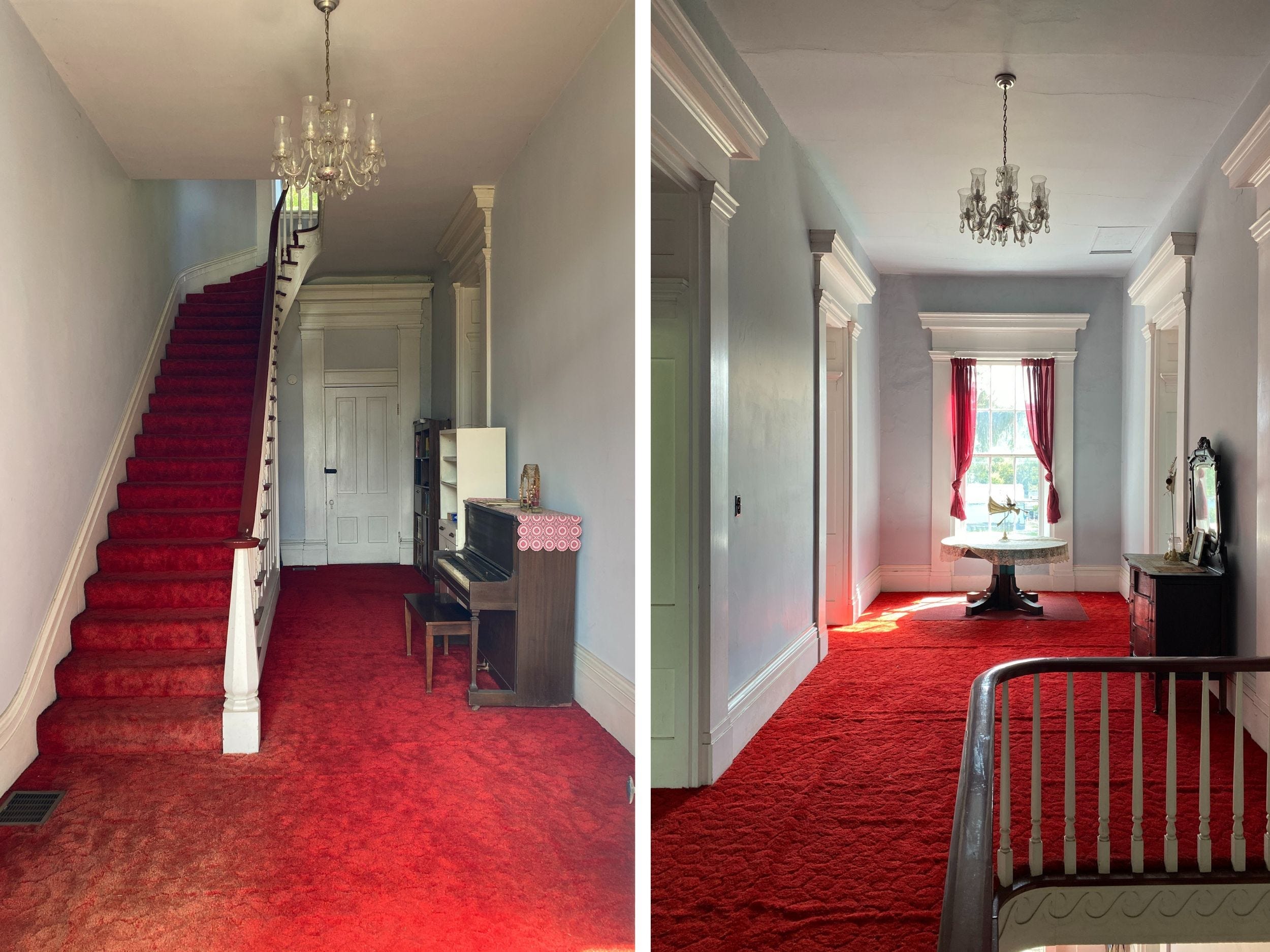 The upstairs ceilings are 12 feet. They have yet to see inside the attic.

We moved to Columbus in July and were able to go see the house a couple times, and then we closed in September.

Connor, a machine-learning engineer, did have to go through the process of asking human resources if he could work remotely. They got themselves a license so he could be in Ohio. A big goal of buying this house was for me to be able to be a stay-at-home mom.

We’ve been staying with Connor’s mom in Columbus and just going back and forth either to see the house, to sign papers, or to start clearing it out. We’re actually going to be moving in here in a couple weeks.

I say moving in lightly. We’re essentially going to be camping for the next six months while construction is going on.

I’m a historian, and I’ve been doing interior decorating as a side career.

What we have been told is that the house was completed in 1807. It was originally owned by a whiskey dealer, and legend has it that he would take his horse and buggy through the tunnel that goes through the hill the house sits on and into the basement to load and unload his wares.

There were one or two owners, then there was a guy named Samuel Waterfield who bought the house for his new bride. He fathered 15 children in that house. Then there were a couple more owners. 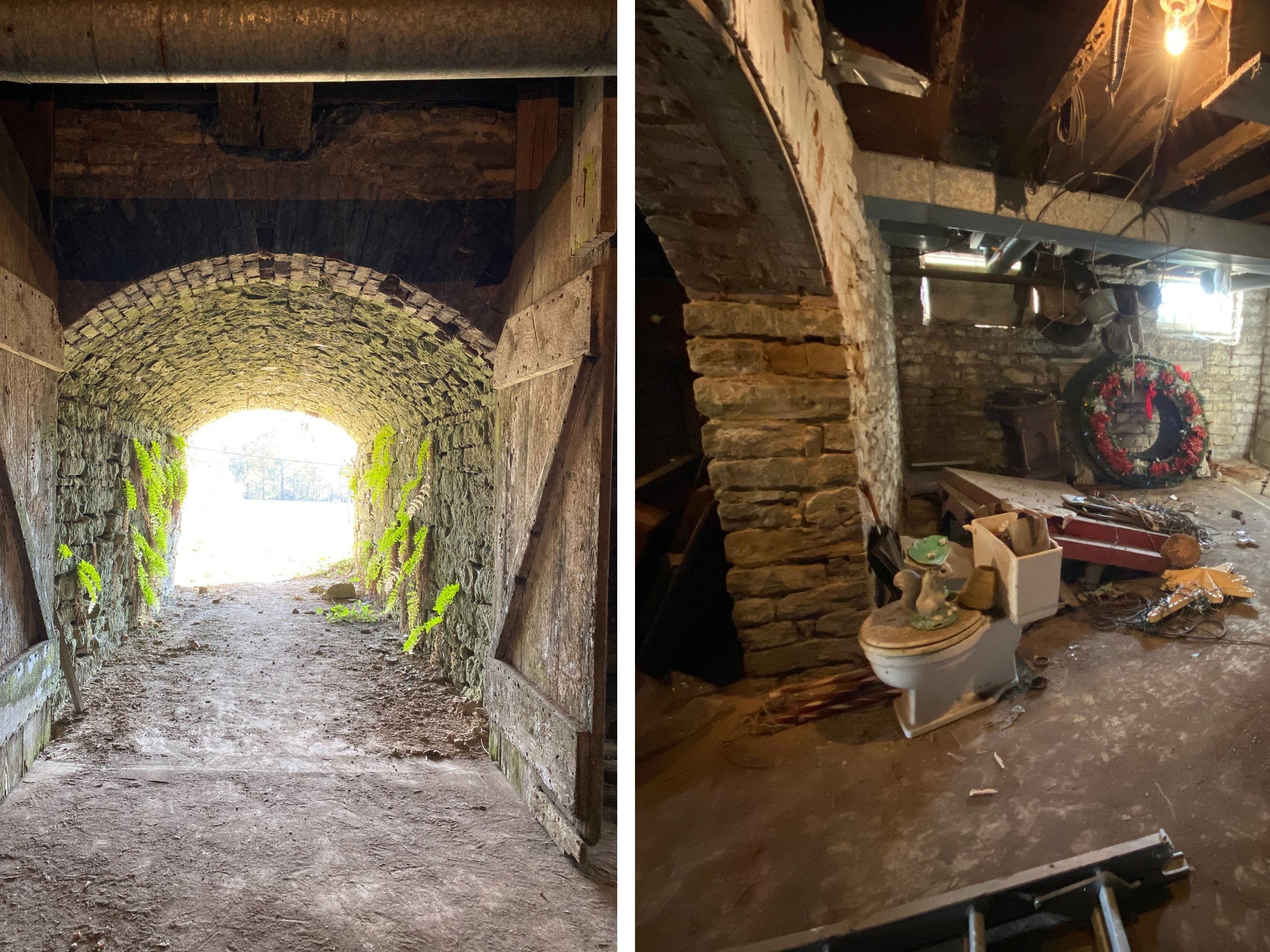 The tunnel and the cellar the Angeleauxs plan to convert into an Airbnb.

We found out that it was called Walnut Hill. In my heart, I knew this house had a name.

The downstairs has a kitchen, and there’s a bathroom off of it. There are four living rooms in the main part of the house. They’ll become a formal dining room, a living room, my office, and a homeschool room for our 4-year-old and any future babies.

Above the kitchen are the servants’ quarters, and there are also four bedrooms upstairs. There’s an attic above that. We have a ladder, but we just haven’t figured out how we can get it up there because the ceilings are 12 feet high. 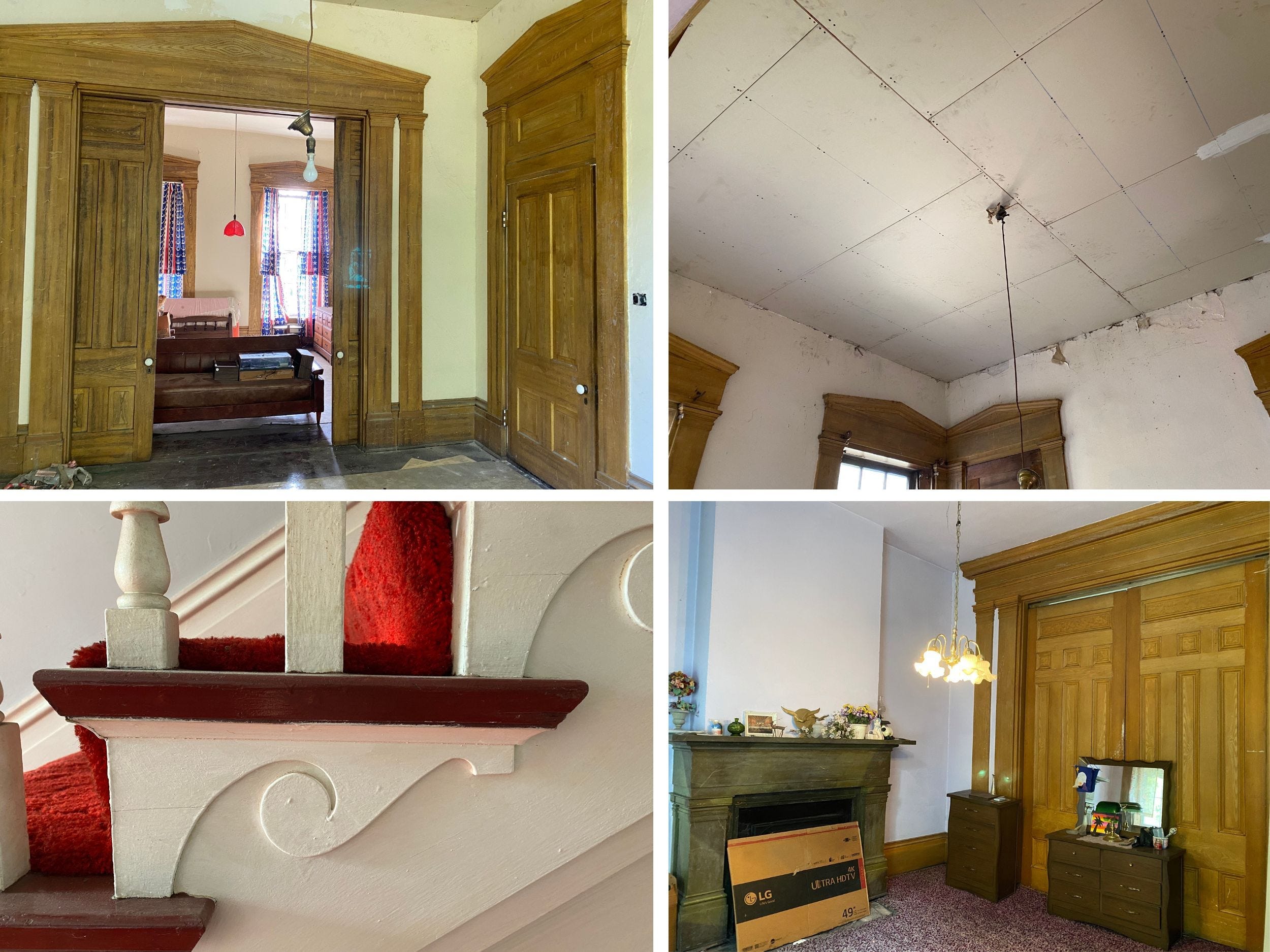 The Angeleauxs were wooed by the home’s craftsmanship, though some upgrades over the years are not as welcome.

There’s one bathroom. We’re told that it was the first house in Higginsport to actually have a bathroom.

We want to add another bathroom — that’s in our five-year plan — because if you need to go to the bathroom in the middle of the night, you have to go all the way downstairs.

The coolest part of the house is the wine cellar in the basement that’s accessible from the tunnel outside. And that’s what we’re going to turn into an Airbnb. I want to share this historic home with people, so I want to make it affordable for families. I think I’ll charge anywhere from $100 to $150 a night.

I like to say that we’re doing a restoration, not a renovation.

It’s been lived in for 215 years. So I’m going with an antique style, but it’s going to be pretty eclectic. We’ve found so many cool antiques in the house, too. I found a sign from World War II, and old military uniforms. 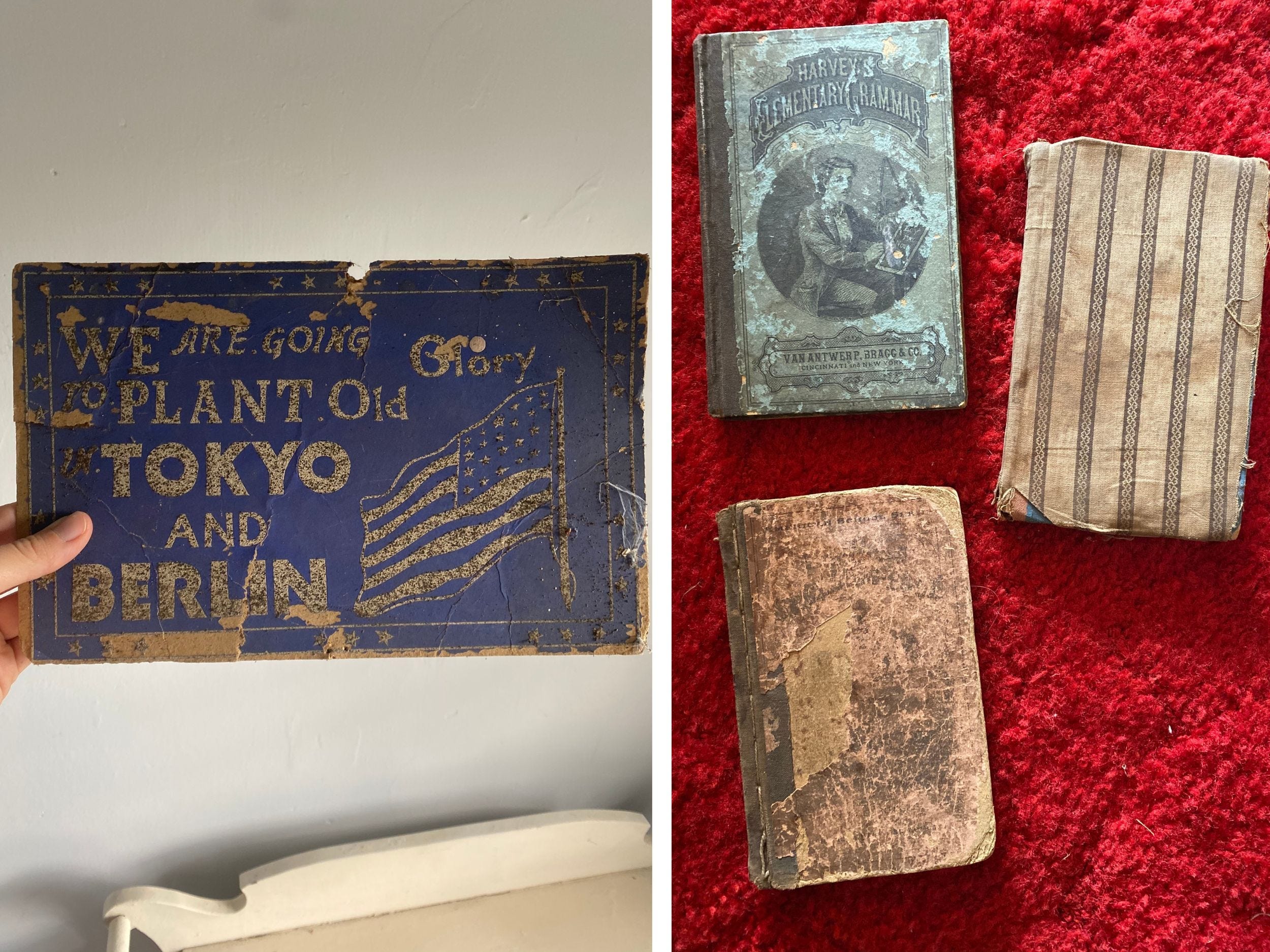 Some of the relics the Angeleauxs have found in the house.

I’ve always been a little bit more cautious with my colors, but we’re going all out. My office is going to be a really deep, rich purple. I am trying to pay homage to the green kitchen, which is pretty intense. So the kitchen is going to be green — it’s just going to be a little mellower in style.

It’s hard to explain, but you just walk in there and know this house has seen some things. And I truly feel like a caretaker of the house and the grounds. I love it so much.

Buying a house built in 1807 has been a huge undertaking

The loan that we did was complicated, and all the safeguards that we put in place to make sure we weren’t buying a money pit took a long time.

The loan that we used is called a 203(k) loan. You’re able to roll in a lot of the repairs that have made the home pretty much unlivable into your mortgage, and it’s backed by the Federal Housing Administration (FHA). It allows people who aren’t filthy rich, who can’t throw tons of money at these historic homes, to be able to afford one.

The mortgage portion of the loan was $165,000, and the renovation loan was $157,000. The estimate was $140,000 for the repairs. You have to have conditional funding in case contractors find something else wrong with it while they’re doing the work. The down payment was $18,000. As soon as we got approved and they locked us in for 60 days, rates started skyrocketing fast. We ended up with a 5.5% interest rate. 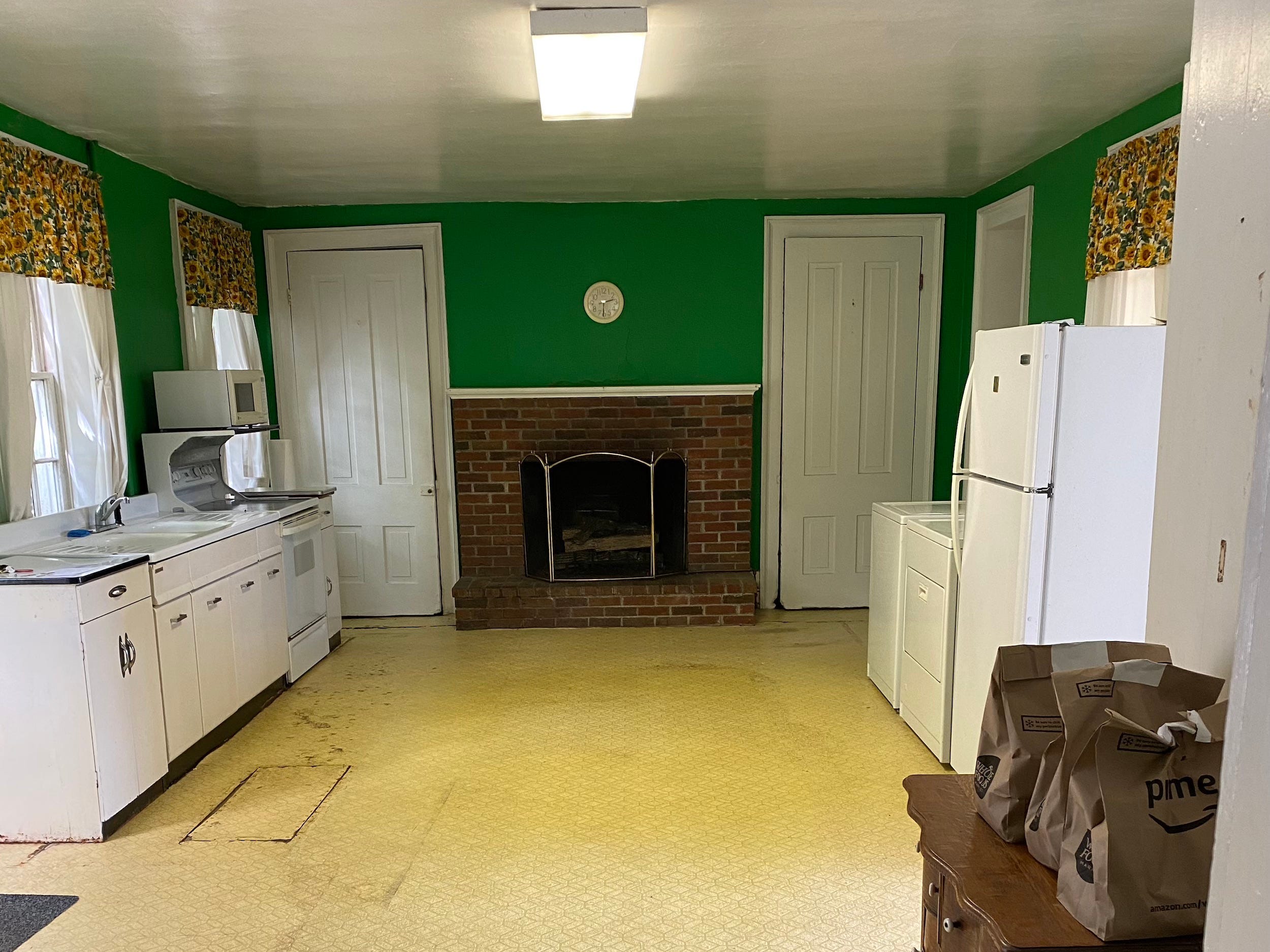 The kitchen will remain green, but the color will get a bit toned down.

We had to have a Housing and Urban Development inspector look at the home and tell us what things needed to happen in order for the FHA to back this loan. We also had a structural engineer, a termite company, and painters come out. We are dealing with what’s most likely lead paint. We had a plumber.

We had chimney sweeps, because we have five chimneys and nine fireplaces.

The biggest thing was that we had three general contractors come out. I thought when contractors came, you were just getting a number, but it was packed full of education. Every contractor brought different expertise and different suggestions on how to go about things. So honestly, I consider them like one of our inspections. We ended up going with an Amish contractor who really knows what he’s doing.

A long project lies ahead

Now, it’s a historic home. We’re not going to get it completely up to code. My stairs aren’t all going to be the same height and width.

Our windows have to be able to open. That’s a big project, because all of our windows are original, and all of them are sealed.

Once we were standing in what was going to be our master bedroom, and a bird flew in. One of the windows is detached, and there’s a big hole in the ceiling from some water damage. We have found so much bird poop in that house. 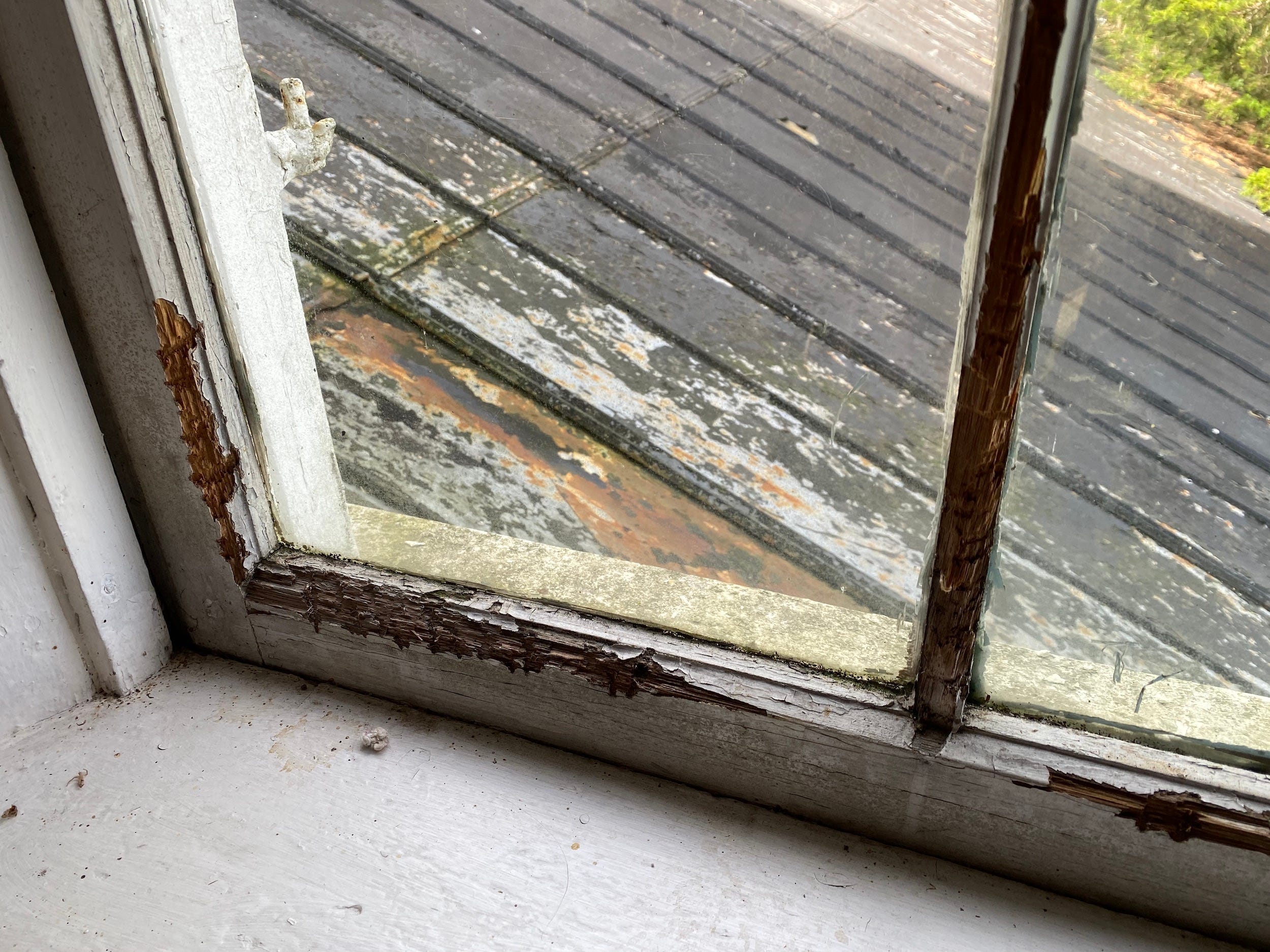 The home still has its original windows. Replacing them will be one of the more major projects the Angeleauxs will have to undertake.

The electric is the old knob-and-tube, so we’re redoing that. There’s also damage from termites. And we’re going to need to get a French drain around the house, because when we went to walk through with our contractor during a rainstorm, we saw rain pouring into the basement.

We just FaceTimed with our contractor yesterday and he showed us three trash bags. And he was like, “Hey, look at this. That’s the beam that was holding up your house. I put my hand on it and it completely crumbled.”

Luckily every wall is 18 inches of solid brick, so that’s why the home was still standing. Right now, we can’t fully walk into the living rooms. I mean, you can, but the floor is sagging. 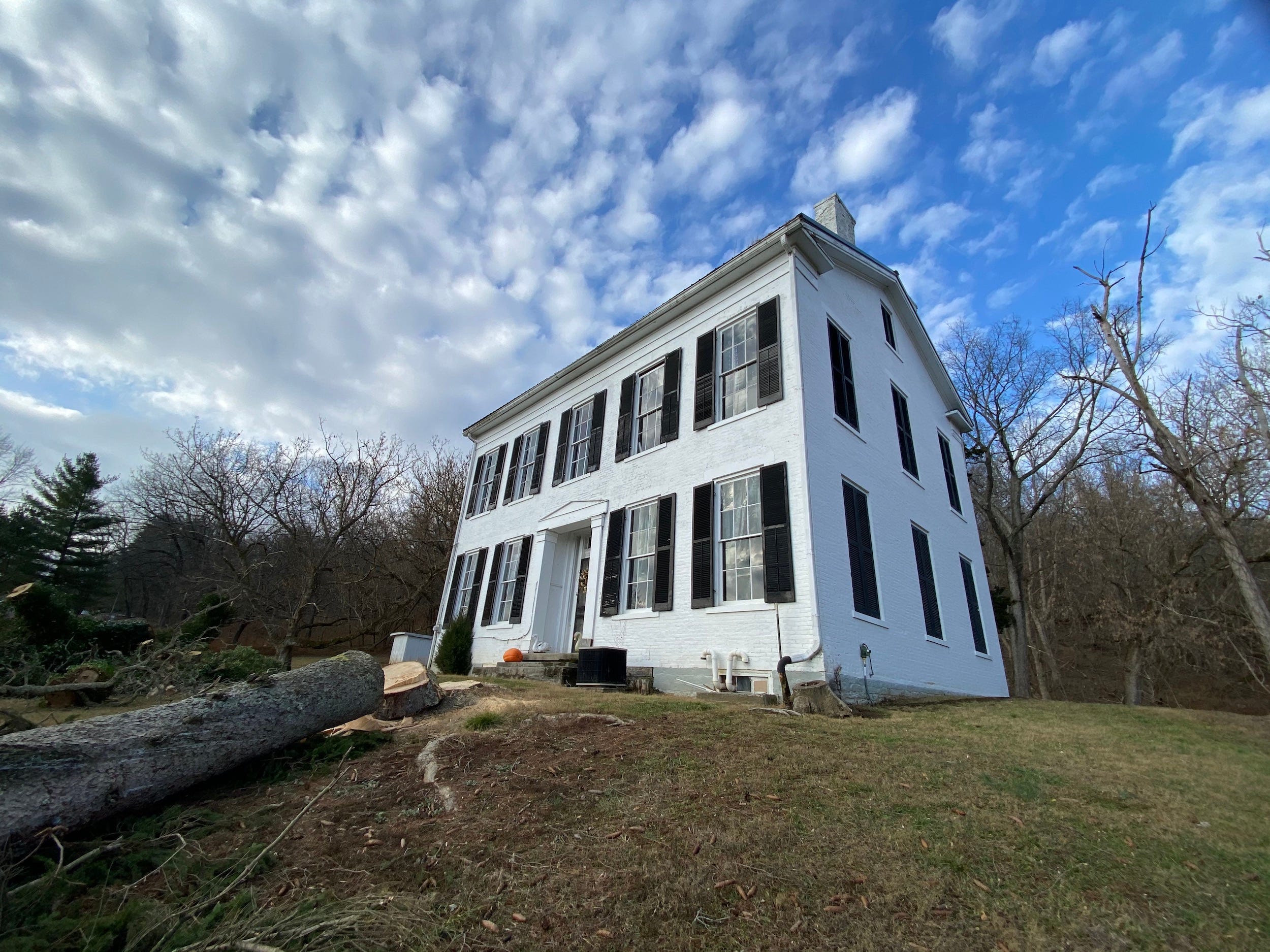 It didn’t scare me too much, because I had my awesome contractor next to me. If there weren’t solutions, it would have scared me. But the solutions, though expensive, are very clear-cut.

People ask how long the restoration’s going to take. I’m like, “The rest of my life.”