While there remains plenty of hubbub around the crypto world and FTX, today I’d like to point your attention to Russian oil.

Remember, before Vladimir Putin ordered the invasion of Ukraine, Russia was Europe’s leading fuel supplier, and the world’s second largest exporter of crude.

But since then, many countries, including the US, imposed sanctions on the warring nation, with the aim of punishing Russia’s economy. In December, a $60-per-barrel price cap was established to limit how much cash Moscow could pull in from oil exports.

But the country’s key oil product is trading far below that level, which in one sense makes the cap moot. I caught up with oil historian Gregory Brew, to get the details.

1. Currently, Russia’s Urals blend is trading at $37.80 a barrel, according to data from Argus Media. That’s less than half the mark of Brent crude, the international benchmark.

At first glance, the depressed prices signal that Russia is struggling to recoup European and other customers that have shunned them in trade.

But to Gregory Brew, a Kissinger Visiting Scholar at Yale, rather than being a direct consequence of any sanction measure, the steep discount reflects the easing global market.

“Since the war, we’ve generally seen Urals go for less, so this isn’t a surprise,” he told me on a phone call. “The current drop reflects softer conditions on the market overall. There’s uncertainty with the global economy and with China’s zero-COVID policies.”

That low price, Brew maintained, suggests Russia will have to keep offering fairly steep discounts in order to maintain its market share, which has come under pressure.

He noted that Urals as a product, too, isn’t a good benchmark for all of Russia’s oil, as it has a narrower refining market and tends to get priced lower because of certain distinct characteristics compared to other global crude benchmarks.

But ultimately this is a demand-driven story, in Brew’s view, and China is the key variable here. Whether domestic demand there bounces back sufficiently will determine a great deal of how global flows move.

It isn’t about what Russia can produce or how badly it’s revenue is impacted by sanctions, but instead the focus should be on what kind of market Russia will be operating in.

Whether Chinese demand comes roaring back or not will hold the biggest sway, the historian said, on how steep a discount Russia can sell its oil at.

“Softer market conditions have made the [price] cap somewhat moot,” Brew said. “The market is somewhat oversupplied, and to say this is the result of the cap is a bit hard to argue.”

What will the standing of Russia as a world energy hub be by the end of the year?

Tweet me (@philrosenn) or email me (prosen@insider.com) to let me know. 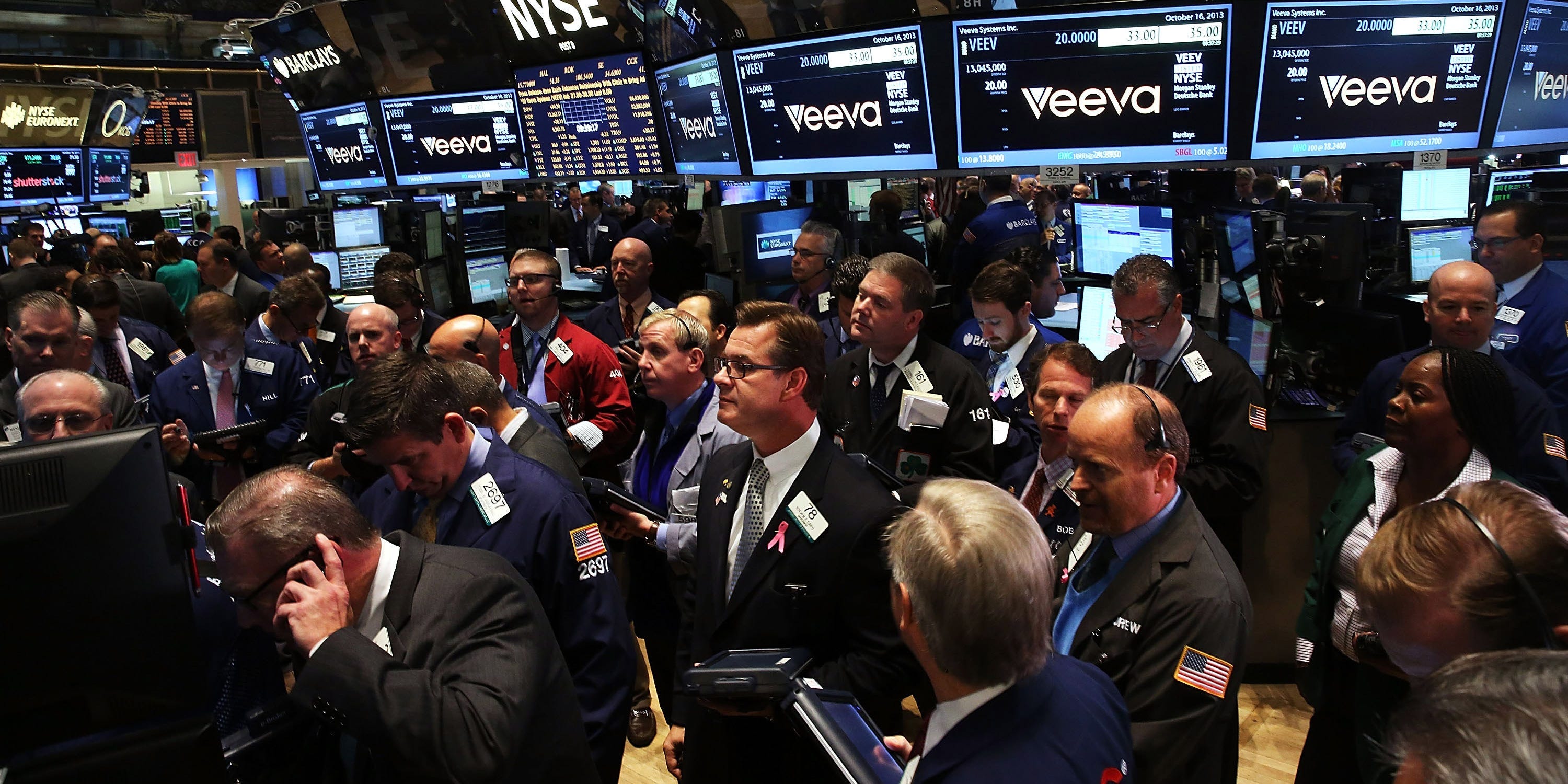 2. US stock futures fall early Tuesday, as investors get ready to hear what Fed chair Jerome Powell has to say at a central bank event in Sweden. Attention will then turn to Thursday’s CPI data. Here are the latest market moves.

3. On the docket: Albertsons Companies, Games Workshop Group, and Bed Bath & Beyond, all reporting.

4. These are the top 11 stocks to buy for 2023. This batch of names are positioned for both a recession and a recovery, according to Bank of America. Here’s the full list.

5. A financially independent millennial predicted that 2023 will be the year of the “creator millionaire.” And that new standing will be what replaces the “crypto millionaire.” He explained how he’s taking advantage of the creator economy while it lasts.

6. Investors cheered for Alibaba as Jack Ma is set to give up control of his fintech empire, Ant Group. Shares of the Chinese e-commerce giant climbed for a sixth straight trading session, and have soared 80% from October lows. After disappearing from the public eye in 2020, the billionaire mogul last week resurfaced in Thailand.

7. BlackRock strategists warned that turbulence in stocks is on the way, and emerging-market stocks could outperform those in developed nations. They explained how China’s reopening, a recession, and high interest rates will disrupt the market.

8. US hedge funds have been subpoenaed over dealings with Binance. The probe of the world’s largest crypto exchange continues to unfold, with the Washington Post reporting that the company is under scrutiny for potential violations of money-laundering rules.

9. Morgan Stanley’s James Egan said home prices are due to drop in 2023 for the first time in over a decade. “Affordability continues to deteriorate at a faster pace than at any point in at least the past 30 years,” he said. The strategist shared three data points that are strikingly similar to the mid-2000s crisis. 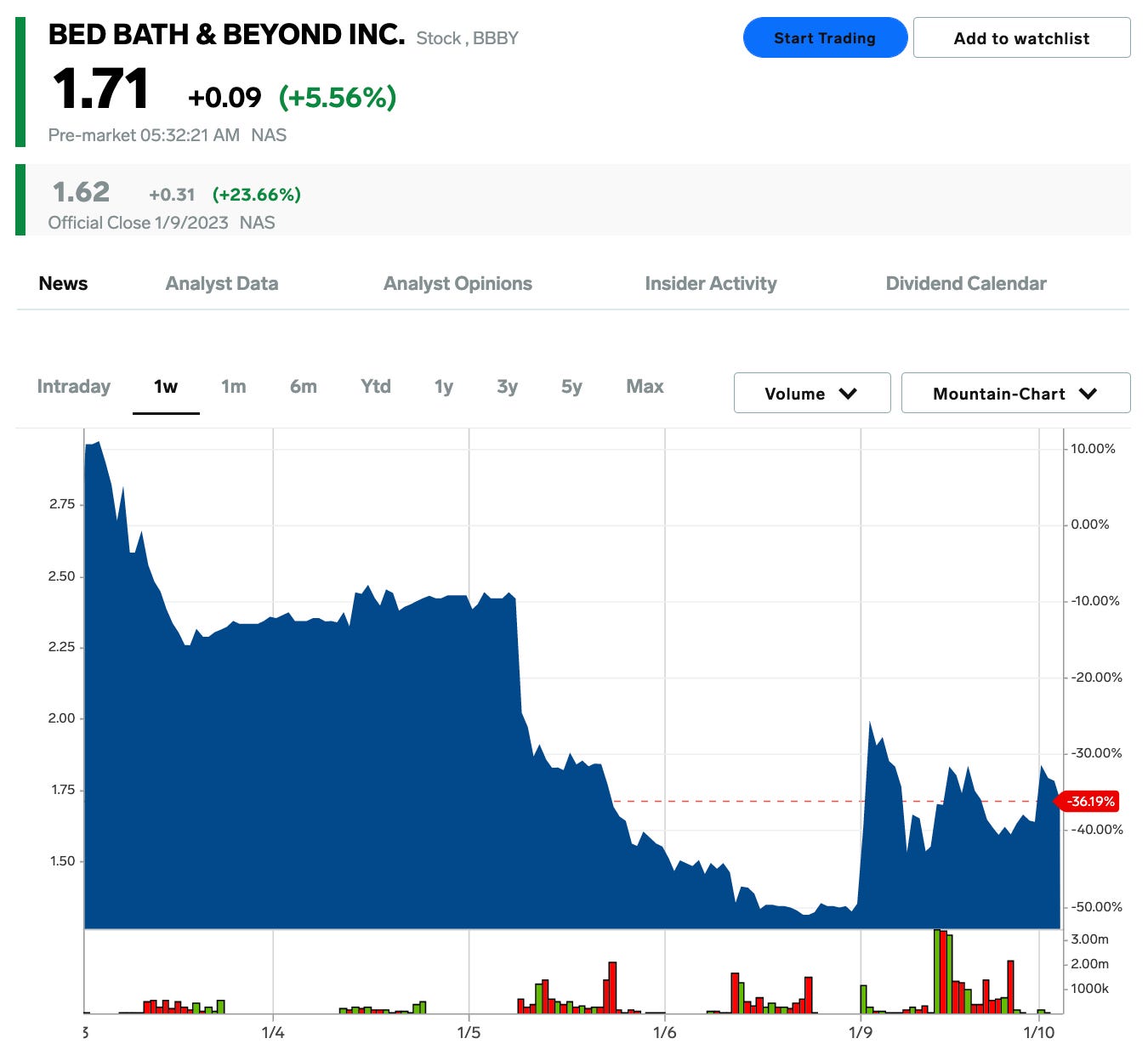 10. Bed Bath & Beyond rallied over 30% Monday following last week’s plunge. Despite bankruptcy fears, Reddit users are speculating that a potential merger and acquisition deal could be in the works for the ailing retailer. Here’s what to know about the meme stock.