China’s sprawling and thinly-resourced countryside was racing to beef up medical facilities amid a surging COVID-19 wave as hundreds of millions of migrant factory workers are due to return to their families for the Lunar New Year next month.

Having imposed the world’s strictest COVID regime of lockdowns and relentless testing for three years, China abruptly reversed course earlier this month towards living with the virus, leaving its fragile health system overwhelmed.

The lifting of restrictions, following widespread protests against them, means COVID is spreading largely unchecked and likely infecting millions of people a day, according to some international health experts.

China officially reported one new COVID death for Wednesday, down from three on Tuesday, but some foreign governments and epidemiologists believe the numbers are much higher, and that more than 1 million people may die across the country next year.

Hospitals and funeral homes in major Chinese cities have been under intense pressure, but the main concern over the health system’s ability to cope with surging infections is focused on the less affluent and poorly equipped countryside.

Each year, hundreds of millions of people, mostly working in factories near the southern and eastern coasts, return to the countryside for the Lunar New Year festivities, due to start on January 22 next year.

The travel rush is expected to last 40 days, from Jan. 7 to Feb. 15, the Ministry of Transport said this week.

State-run China Daily reported on Thursday that rural regions across China were beefing up their medical treatment capacities and ensuring availability of life support equipment and critical-care beds.

It said a hospital in a part of Inner Mongolia where more than 100,000 people live in the countryside was seeking bidders for a 1.9 million yuan ($272,308) contract to upgrade its wards into intensive care units.

A hospital in Huailai county, in the Hebei province, also said it needed equipment for its emergency wards.

The world’s second-largest economy is expected to suffer a slowdown in factory output and domestic consumption in the near term as workers and shoppers fall ill, but is also predicted to bounce back later next year once the COVID wave eases.

China’s re-opening also raises the prospects of Chinese tourists returning to shopping streets around the world, although some countries are taken aback by the scale of the outbreak and are sceptical of Beijing’s COVID statistics.

China’s official death toll of 5,246 since the pandemic began compares with more than 1 million deaths in the United States.

The Chinese-ruled global financial hub of Hong Kong, a city of 7.4 million people which lost control over COVID earlier this year, reported more than 11,000 deaths.

The United States, India, Italy, Japan and Taiwan said they would require COVID tests for travellers from China. Britain was considering a similar move, the Telegraph reported.

“We have just limited information in terms of what’s being shared related to number of cases that are increasing, hospitalizations and especially deaths,” a U.S. health official said. “Also, there’s been a decrease in testing across China so it also makes it difficult to know what the true infection rate is.”

Americans should also “reconsider travel to China, Hong Kong, and Macau,” according to a U.S. official travel alert on Wednesday, which cited “reports that the healthcare system is overwhelmed,” along with the risk of new variants.

In Italy, Milan’s main airport, Malpensa, had already started testing passengers arriving from Beijing and Shanghai on Dec. 26, and the results showed almost one in two visitors was infected.

China has rejected criticism of its statistics as groundless and politically-motivated attempts to smear its policies. It also played down the risk of new variants, saying it expects future mutations to be potentially more virulent but less severe.

Omicron was still the dominant strain in the country, Chinese health officials said this week.

Australia, Germany, Thailand and others said they would not impose additional restrictions travel for now.

For its part, China, whose borders have been all but shut to foreigners since early 2020, will stop requiring inbound travellers to go into quarantine from Jan. 8. 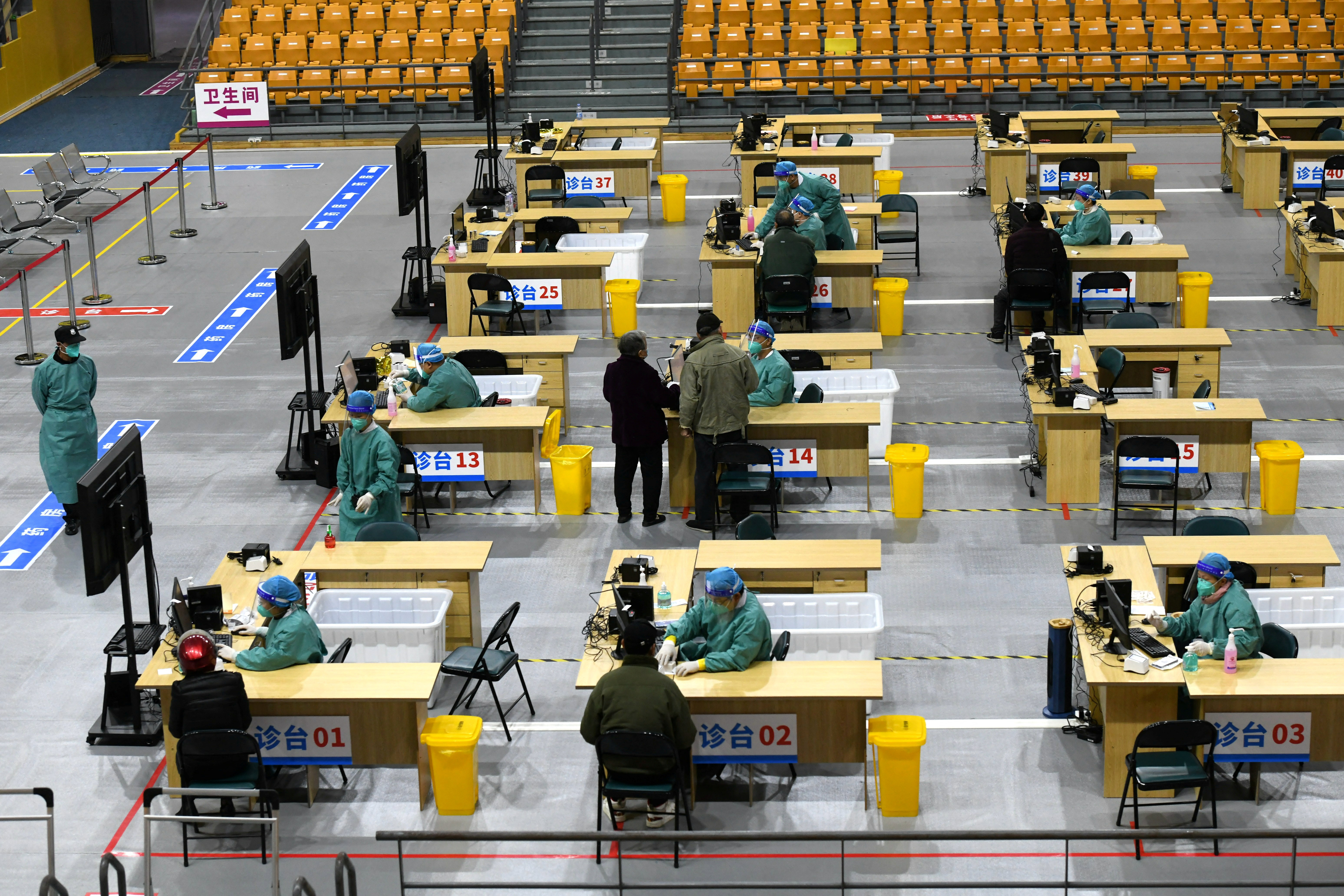 Medical workers attend to patients at a makeshift fever clinic inside a gymnasium, amid the coronavirus disease (COVID-19) outbreak in Fuzhou, Fujian province, China December 28, 2022. cnsphoto via REUTERS 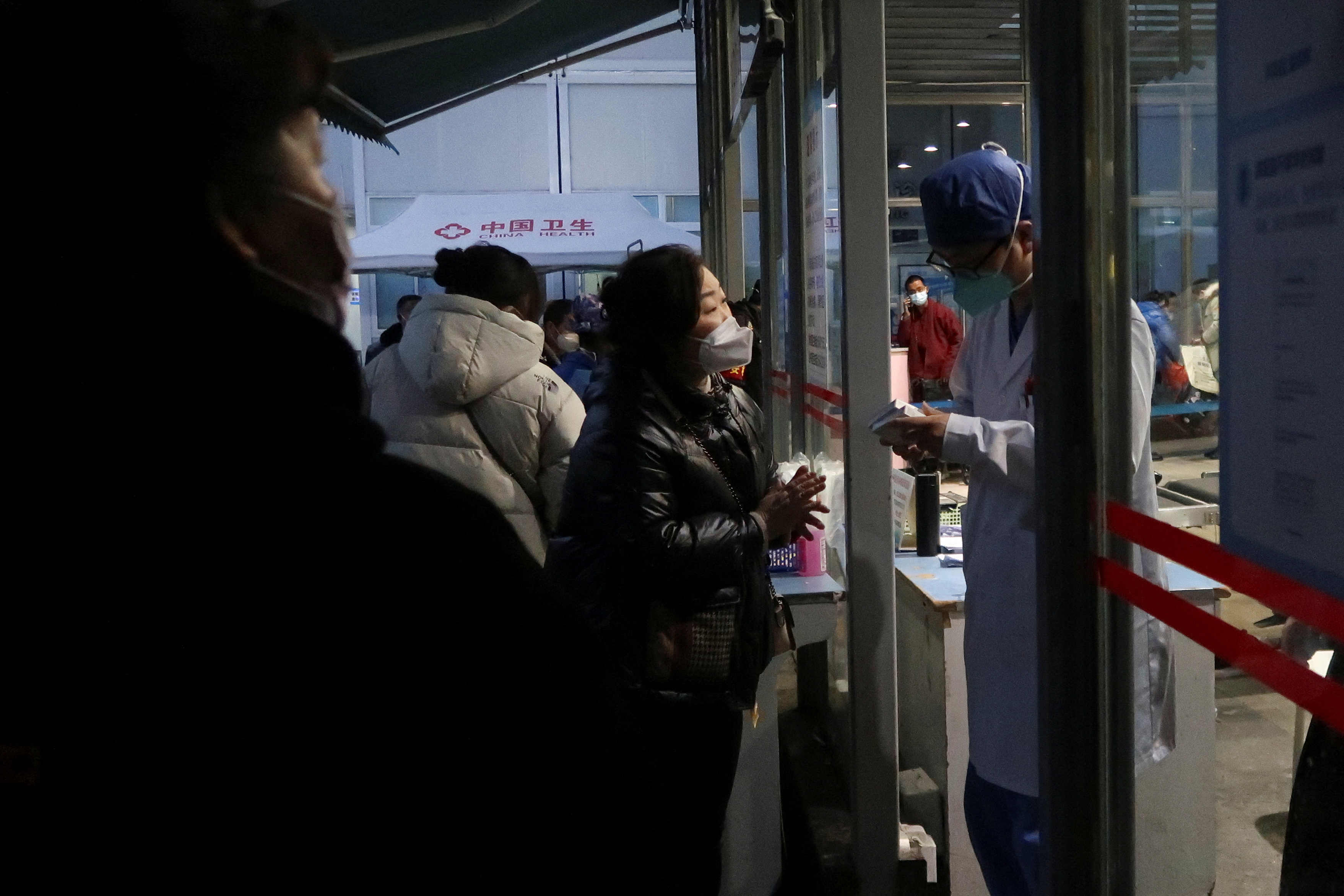 A family member consults a doctor outside an emergency department of a hospital, amid the coronavirus disease (COVID-19) outbreak, in Chengdu, Sichuan province, China December 27, 2022. REUTERS/Tingshu Wang