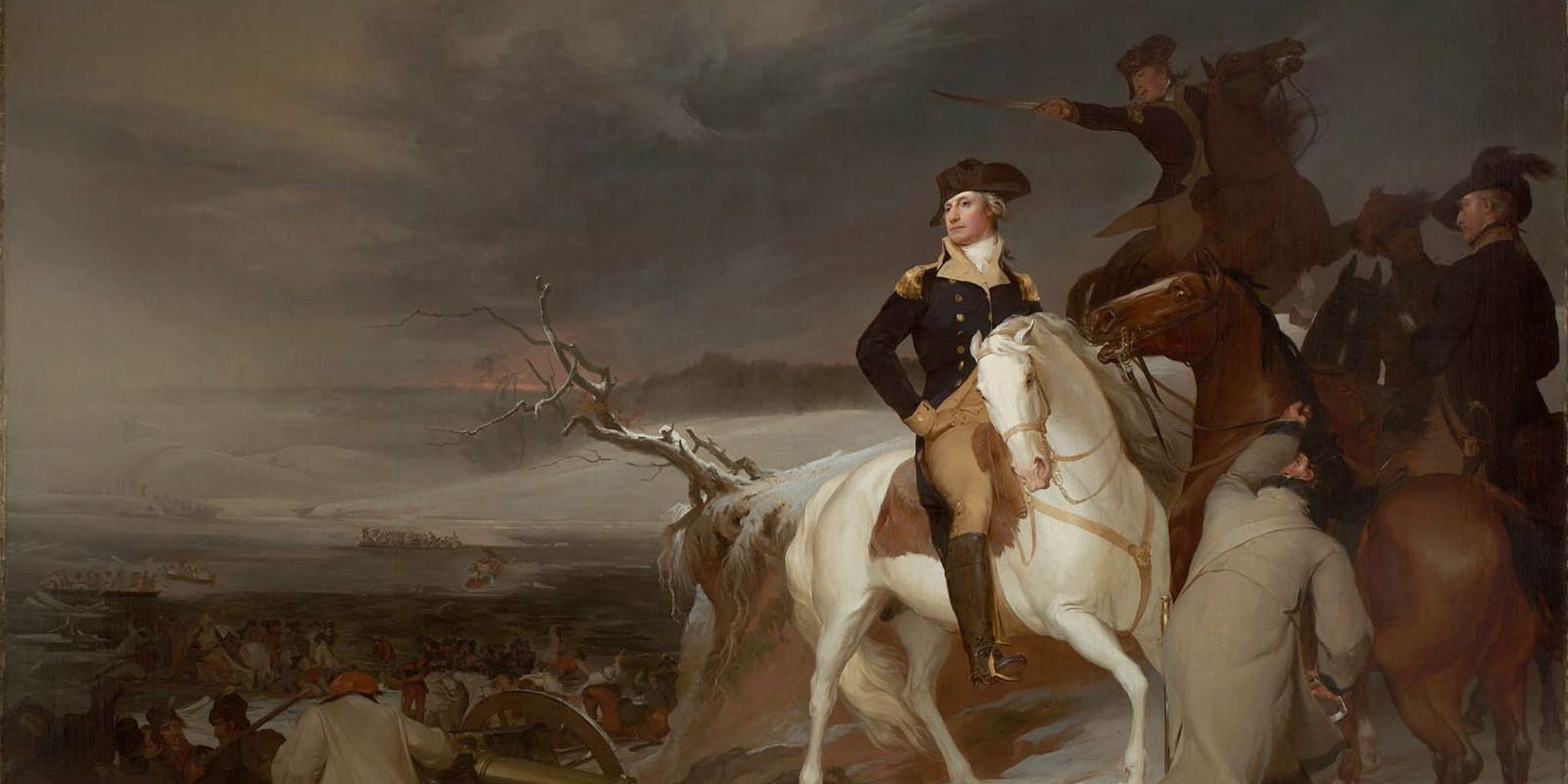 The Passage of The Delaware by Thomas Sully

Christmas is one of the most celebrated holidays on earth, but that doesn’t mean that major events don’t happen during the holiday or that December 25 passes uneventfully every year.

Important events linked to both of America’s most formative wars — the Revolutionary War and the Civil War — took place on Christmas, and British and German troops even celebrated the holiday together on Christmas Day during WWI in a rare truce in the middle of horrific combat.

Here is a look at some of the major military events that have taken place on Christmas, a date with a rather rich history. 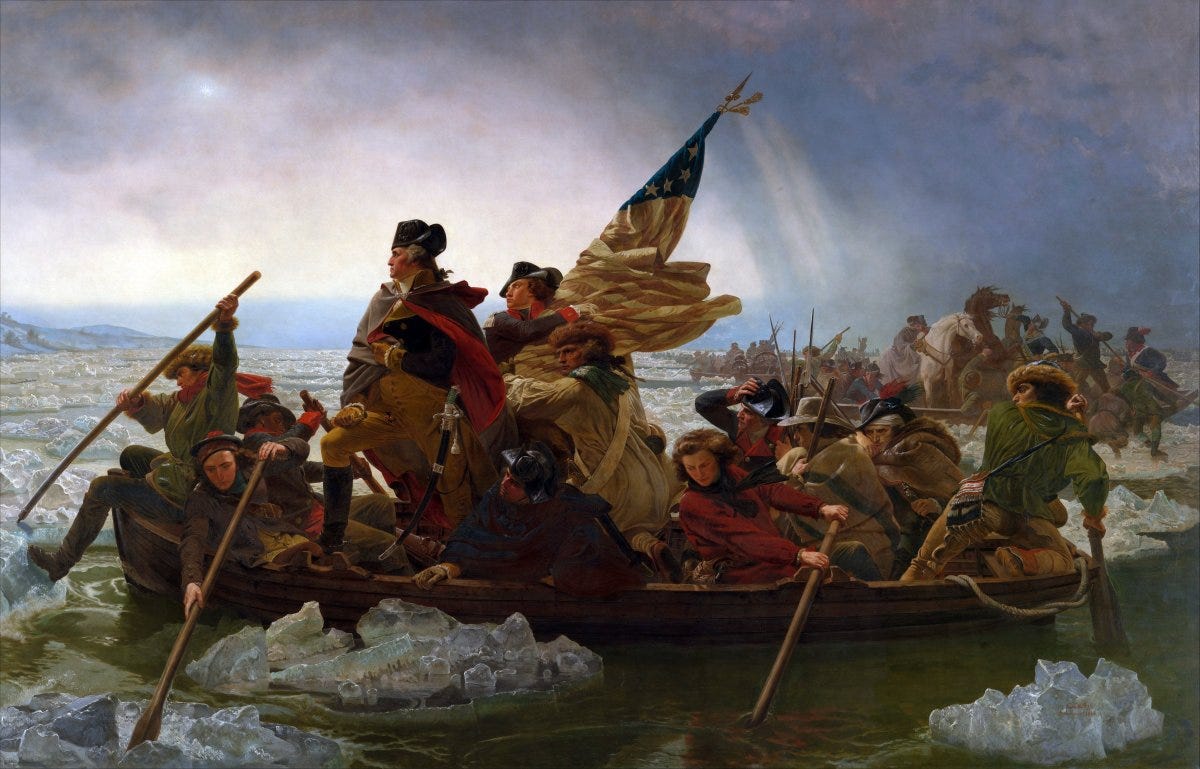 Leutze’s depiction of Washington’s attack on the Hessians at Trenton.

In 1776, Washington led his troops across a 300-yard stretch of the Delaware River in the dead of night between December 25 and 26.

The surprise move would put Washington’s men a 19-mile march away from a garrison of Hessians — German mercenaries hired by the British to help them retain a hold on the rebelling colonies — that the Continental Army took completely by surprise.

The Hessians’ quick surrender at the Battle of Trenton, just 90 minutes into the fight against Washington’s 2,400 soldiers, would be the first of two rebel victories in New Jersey, the other being the Battle of Princeton a week later, as the Continental Army regained control of the colony.

This effectively reversed the British drive that had pushed the rebels across the state in the previous months. The daring crossing of the Delaware ended up being one of the turning points of the Revolutionary War. 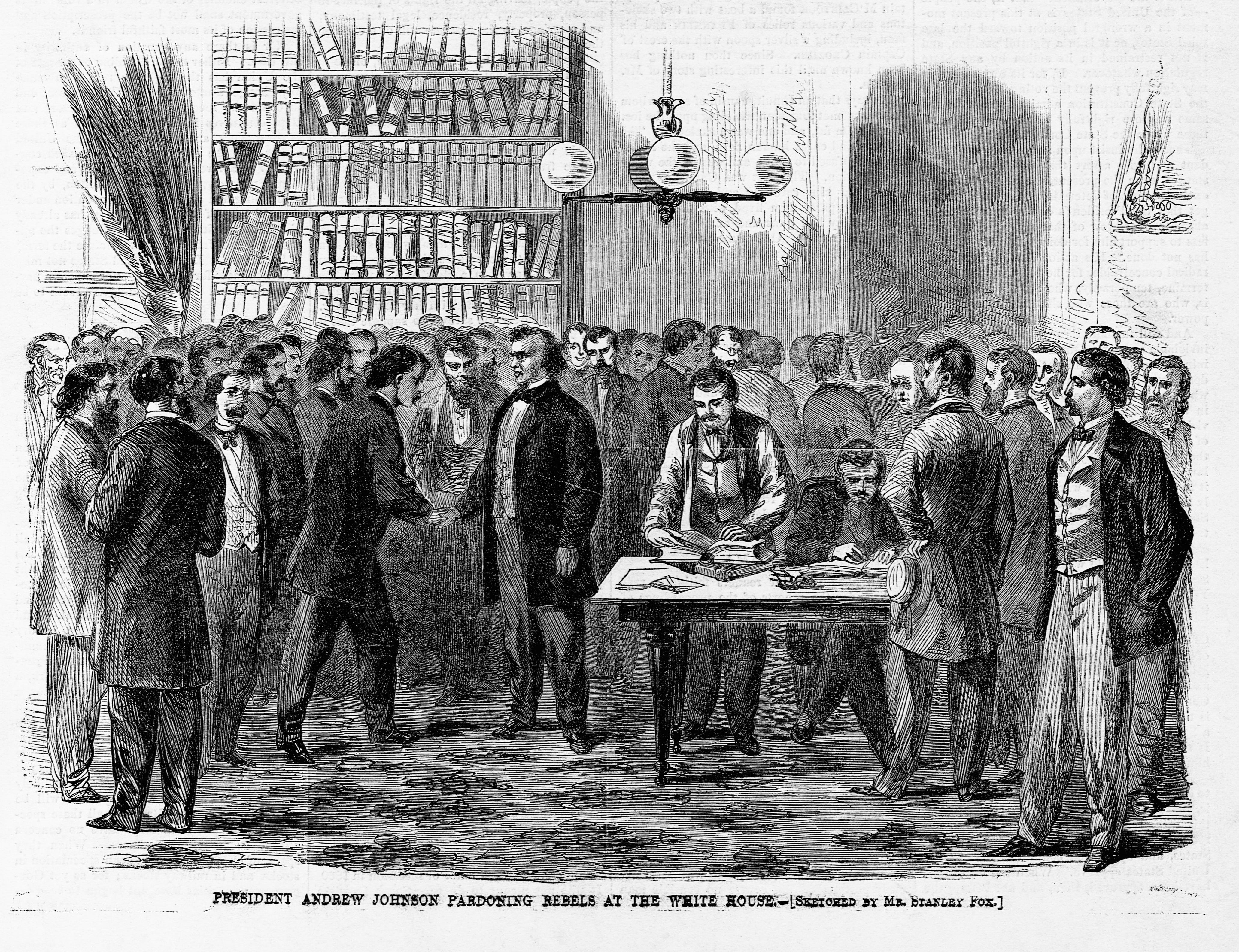 Nearly a century later, on Christmas Day 1868, US President Andrew Johnson extended a full pardon and amnesty “to all and to every person who, directly or indirectly, participated in the late insurrection or rebellion.”

The Civil War had ended more than three years earlier, but Union General Ulysses S. Grant’s scorched-earth tactics late in the conflict had left much of the South in ruins. The country emerged from the war in a state of deep division.

Johnson had been a Tennessee congressman, senator, and governor before joining Abraham Lincoln’s presidential ticket. He was tipped in part to attract southern votes. At war’s end, however, he seemed to determine to punish those who had rebelled to preserve the institution of slavery.

The day after being sworn in as the nation’s president, Johnson said that “treason must be made infamous, and traitors must be impoverished.”

But according to the History Department at North Carolina State University, Attorney General James Speed tempered Johnson’s punitive intentions: “Mercy must be largely extended. Some of the great leaders and offenders only must be made to feel the extreme rigor of the law,” Speed advised.

Prior to this blanket Christmas Day amnesty, southerners who had fought for the Confederacy could obtain a pardon provided only that they swore allegiance to the Union (top officials were excluded). Under “Proclamation 179,” pardons were extended “to every person who, directly or indirectly, participated in the late insurrection.” 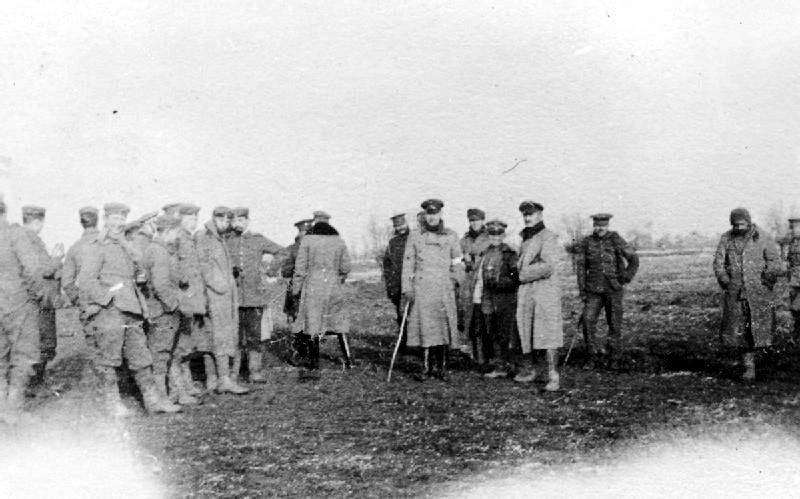 British and German troops meet in no man’s land on Christmas Day, 1914.

On Christmas Day 1914, the year that World War I began, soldiers left their trenches to observe the holiday in peace.

In the midst of brutal trench warfare, British and German soldiers laid down their arms to sing songs, play soccer, and barter with the cigarettes and sweets they had received in care packages.

More than 25 million people would die in that war, but as Smithsonian Magazine noted, for “a few brief hours” that Christmas Day, “men from both sides on the Western Front laid down their arms, emerged from their trenches, and shared food, carols, games and comradeship.”

That holiday truce was not officially sanctioned and, in some places, it was limited to an occasion for each side to bury their dead strewn across no man’s land, the barren stretch of earth between the opposing sides. On the Eastern Front, fighting continued. The Russians did not celebrate Christmas until January.

As the higher commands for the various sides were opposed to the actions soldiers had taken that Christmas, some participants were punished, and no such truce would again be established for the remainder of the war. 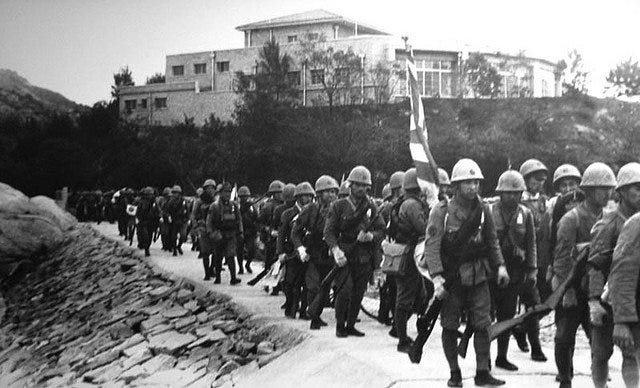 Japan’s aggression during World War II began well before the attack on Pearl Harbor. In 1931, Imperial Japan invaded Manchuria, a vast coastal region in northeastern China. In 1937, it made advances on the rest of the country as well.

It wasn’t until 1941 that Tokyo directly confronted the West with its imperial ambitions, beginning with the December 7 attack on the US naval fleet in Hawaii.

The surprise assault was immediately followed by Japan’s invasion of Hong Kong, a British colony at the time that was defended by local troops from the territory, as well as the United Kingdom, Canada, India, China, and France.

Hundreds died in the 18-day battle for Hong Kong, which ended on Christmas Day 1941. Japan announced the British surrender that day in a radio broadcast.

Imperial Japan would not surrender Hong Kong back to the British Royal Navy until August 30, 1945.

1941 — News breaks that Admiral Émile Muselier captured Saint Pierre and Miquelon, an archipelago near Canada, for the Free French Forces 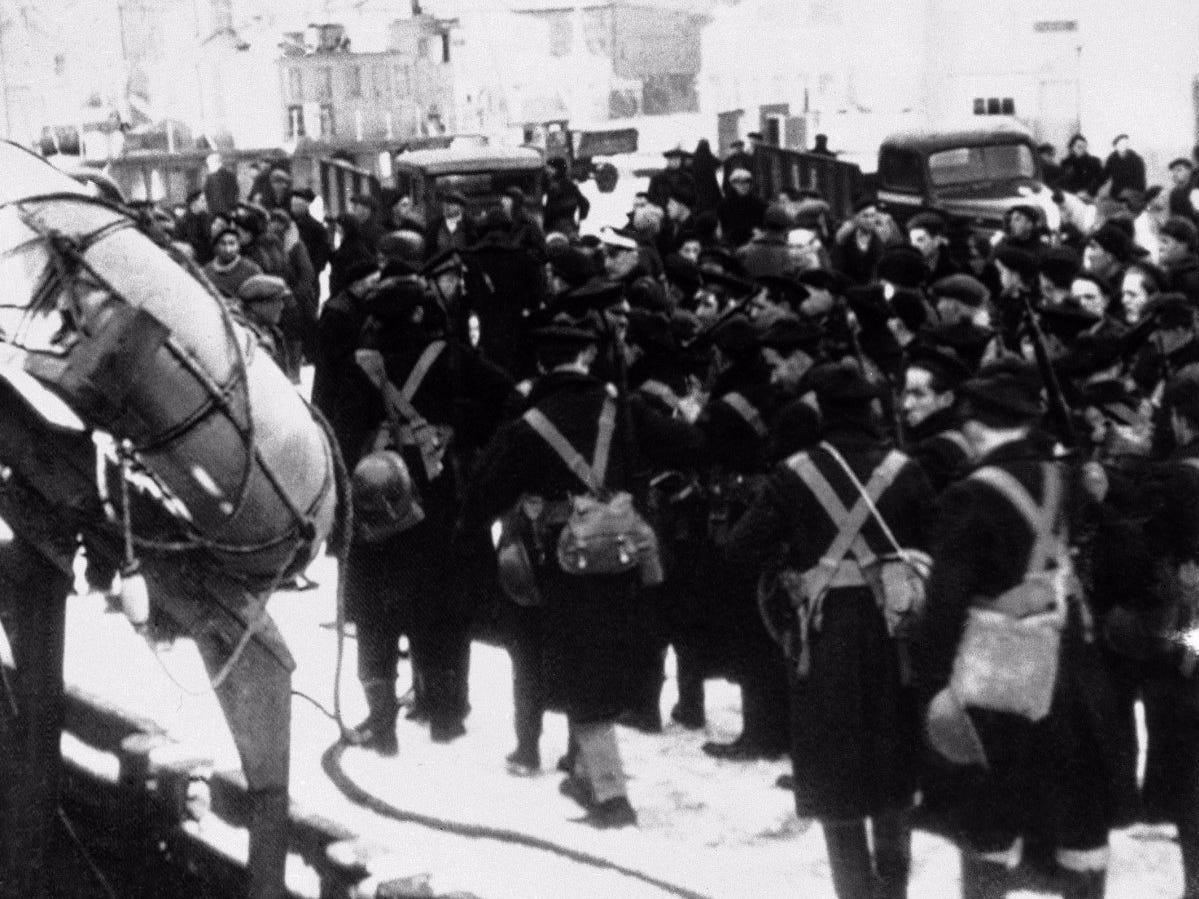 Free French Marines marching along the St. Pierre dock during the occupation on Dec. 26, 1941.

The North American continent does not feature as a major hot spot in the events of World War II.

On Christmas Eve 1941, a small task force of Free French soldiers, operating under the command of Admiral Émile Muselier, stormed the island of St. Pierre, off the coast of Newfoundland, Canada, under the cover of darkness.

They met no resistance, despite the local administrator’s loyalty to France’s Vichy regime, and the island’s administrative centers were taken within an hour.

The storming of the island, which was known for producing liquor that was smuggled into the United States during Prohibition, eliminated what otherwise could have served as a fascist outpost deep among Allied nations.

Indeed, British Prime Minister Winston Churchill had bemoaned the fact that a powerful radio transmitter on the island was regularly airing “Vichy lies and poison throughout the world.”

The news came out quickly. “By five minutes past midnight on December 25, the story of the invasion was telegraphed to Canadian and American newspapers,” according to Douglas Anglin’s “Free French Invasion: The St. Pierre and Miquelon Affaire of 1941.” A day later, Nazi propaganda would falsely claim there had been a bloodbath.

Pierre Bienaimé wrote a previous version of this post.