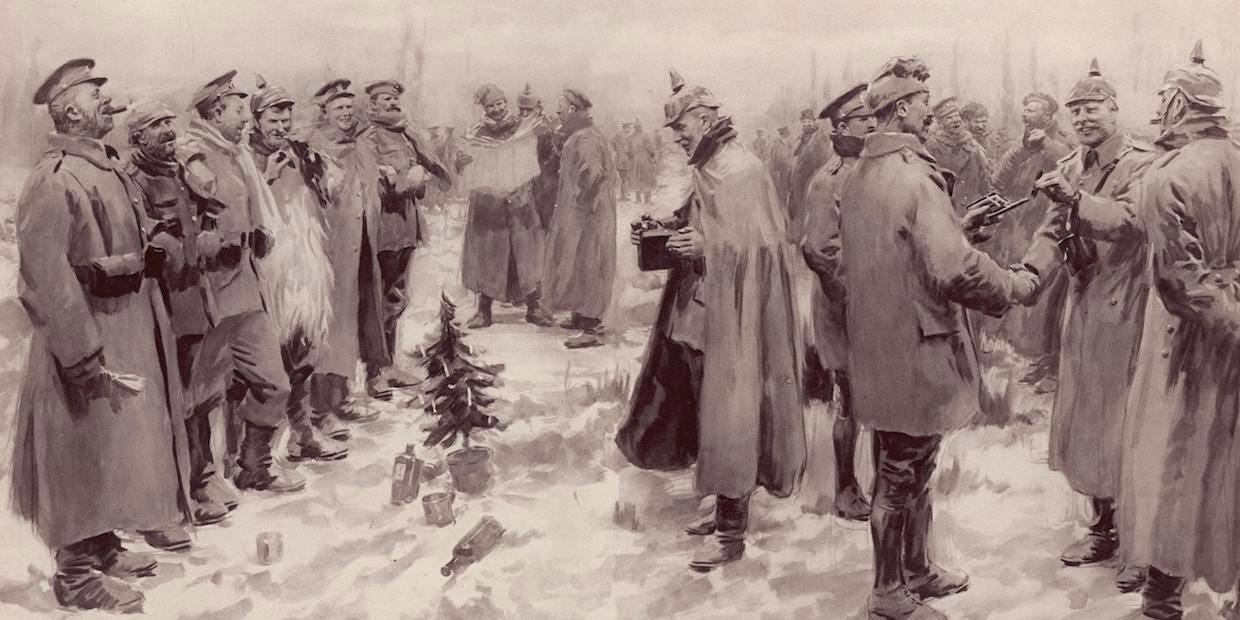 An artist’s impression from The Illustrated London News of 9 January 1915 of what the Christmas truce looked like. It is titled “British and German Soldiers Arm-in-Arm Exchanging Headgear: A Christmas Truce between Opposing Trenches”

World War I is, for good reason, remembered as one of the worst wars fought in human history.

Millions of soldiers and civilians died in a conflict that changed the way war was waged and set the stage for the rest of the 20th century.

But for one night and one day, some units in the warring parties — the armies of France and Britain on one side, and Germany on the other — put down their weapons for the briefest of moments to celebrate a holiday that brought opposing sides together.

The Great War was supposed to be over by Christmas of 1914. But five months after the war began in July, the front was deadlocked. The unprecedented losses at the Battles of Tannenberg, the Marne, and Ypres forced the opposing sides into the gruesome trench warfare that WWI is known for.

Huddled in their trenches on Christmas Eve, soldiers on both sides across the entire Western frontline celebrated the holiday as best as they could. Soon, all along the frontline combatants began to leave their trenches without their weapons, and meet enemy soldiers in no man’s land.

What followed was an amazing episode for humanity. Enemies who were, just hours before, slaughtering each other at a level unseen in human history, were talking, singing, dancing, and eating together as if they were friends. 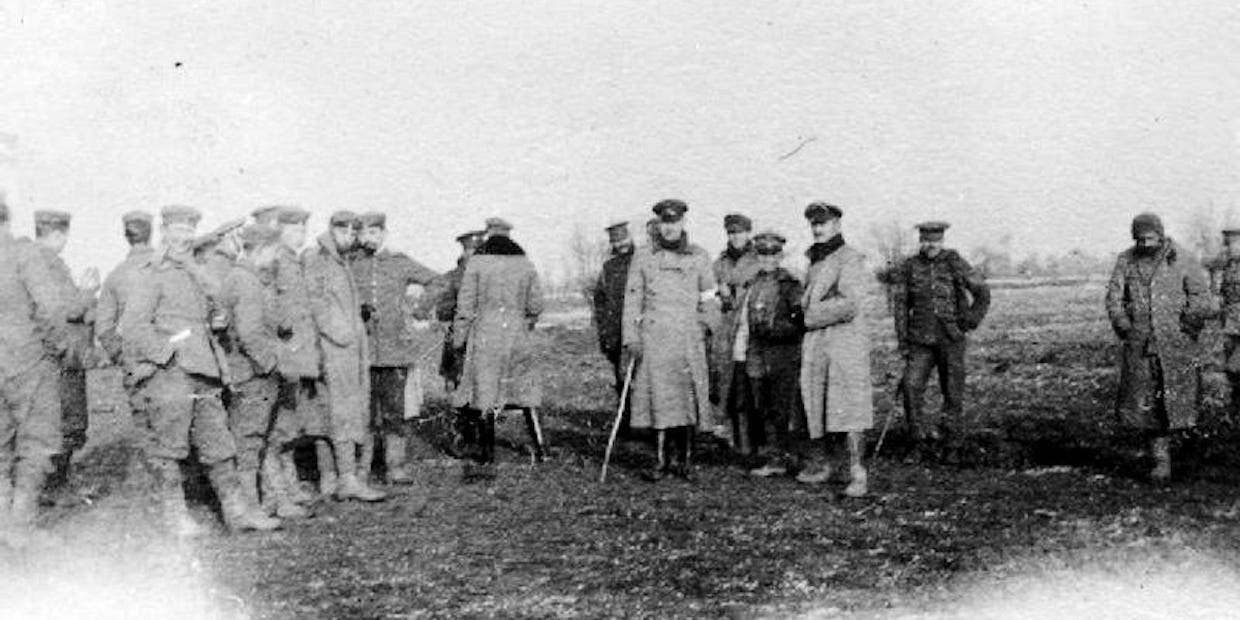 British and German troops meeting in No-Man’s Land during the unofficial truce, 1914.

In letters to newspapers and loved ones, soldiers described how a spontaneous truce broke out.

“During Christmas Day our fellows and the Saxons fixed up a table between the two trenches and they spent a happy time together, and exchanged souvenirs and presented one another with little keepsakes,” one British soldier wrote.

“I had a most extraordinary Christmas, and I have come to the conclusion that I would not have spent it out of the trenches for worlds,” another British soldier said in a letter to loved ones. After establishing a truce, the soldier said that “in five minutes the ground between the opposing trenches was full of Germans and Highlanders exchanging cigars for cigarettes, and many other small luxuries.”

In some places, soccer games were held in no man’s land; sometimes against each other, and sometimes with mixed teams. “The regiment actually had a football match with the Germans who beat them 3-2,” an officer in the Royal Army Medical Corps wrote in a letter to a friend in London.

Soldiers on both sides also buried their dead and had Christmas services as if they were in church.

Perhaps the best way to sum up the truce was said by a British soldier whose letter to the Carlisle Journal was published on January 5, 1915:

“All this talk of hate, all this firing at each other that has raged since the beginning of the war quelled and stayed by the magic of Christmas,” he wrote. “It is a great hope for future peace when two great nations hating each other as foes have seldom hated, one side vowing eternal hate and vengeance and setting their venom to music, should on Christmas day and for all that the word implies, lay down their arms, exchange smokes and wish each other happiness.”

“It speaks to the common humanity in the midst of war, and to the very best of who we are — which is one of those things that we recognize during the holiday season,” Lora Vogt, the Curator of Education at the National WWI Museum and Memorial, told Insider.

Though truces were implemented in some combat areas, they were not upheld everywhere along the Western Front, and fighting did occur in some places during the holidays, according to London’s Imperial War Museum.

In areas were truces were established, the high commands of both sides did not approve of the actions of the soldiers. Some units were punished or transferred to other parts of the frontline, and no truces were ever held again for the rest of the war.

A century after the war began, German and British soldiers still get together to play soccer and celebrate Christmas. Now they do so as allies, part of the hopeful peace that the soldiers of 1914 no doubt prayed for in the trenches on the Western Front. Soldiers from the two countries previously played at a NATO base in Afghanistan.

Historical reenactments of the occasion have also been held in various locations throughout Europe, like England and Belgium. 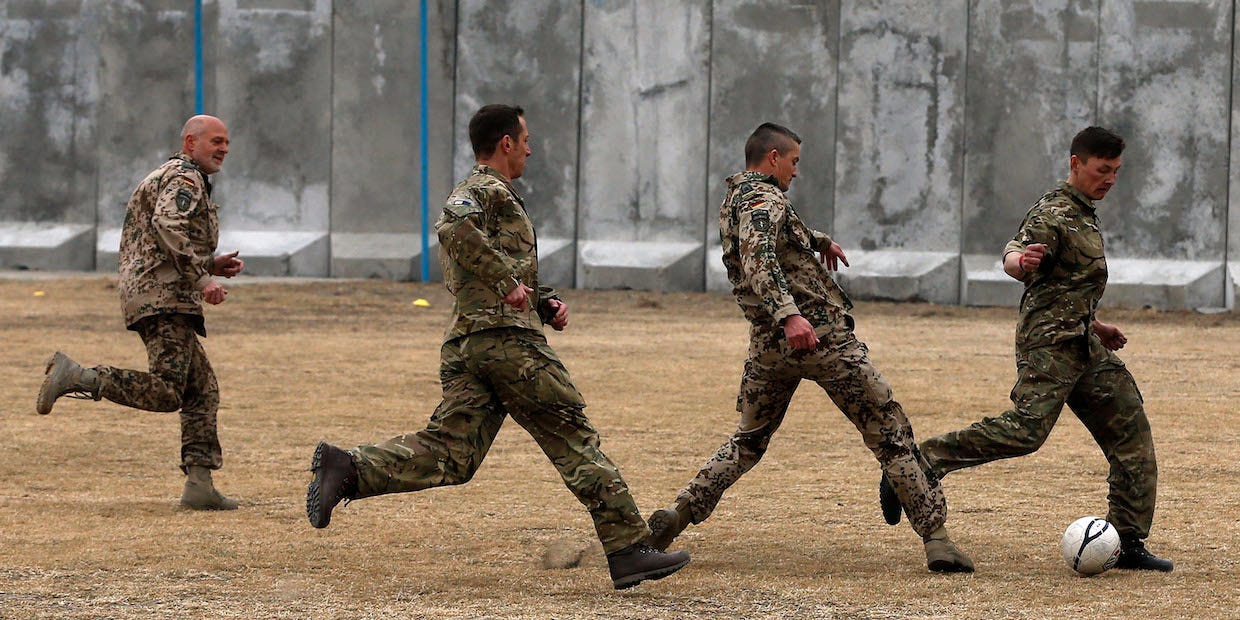 German and British troops participate in a football match to commemorate the Christmas Truce of 1914, at the ISAF Headquarters in Kabul December 24, 2014. 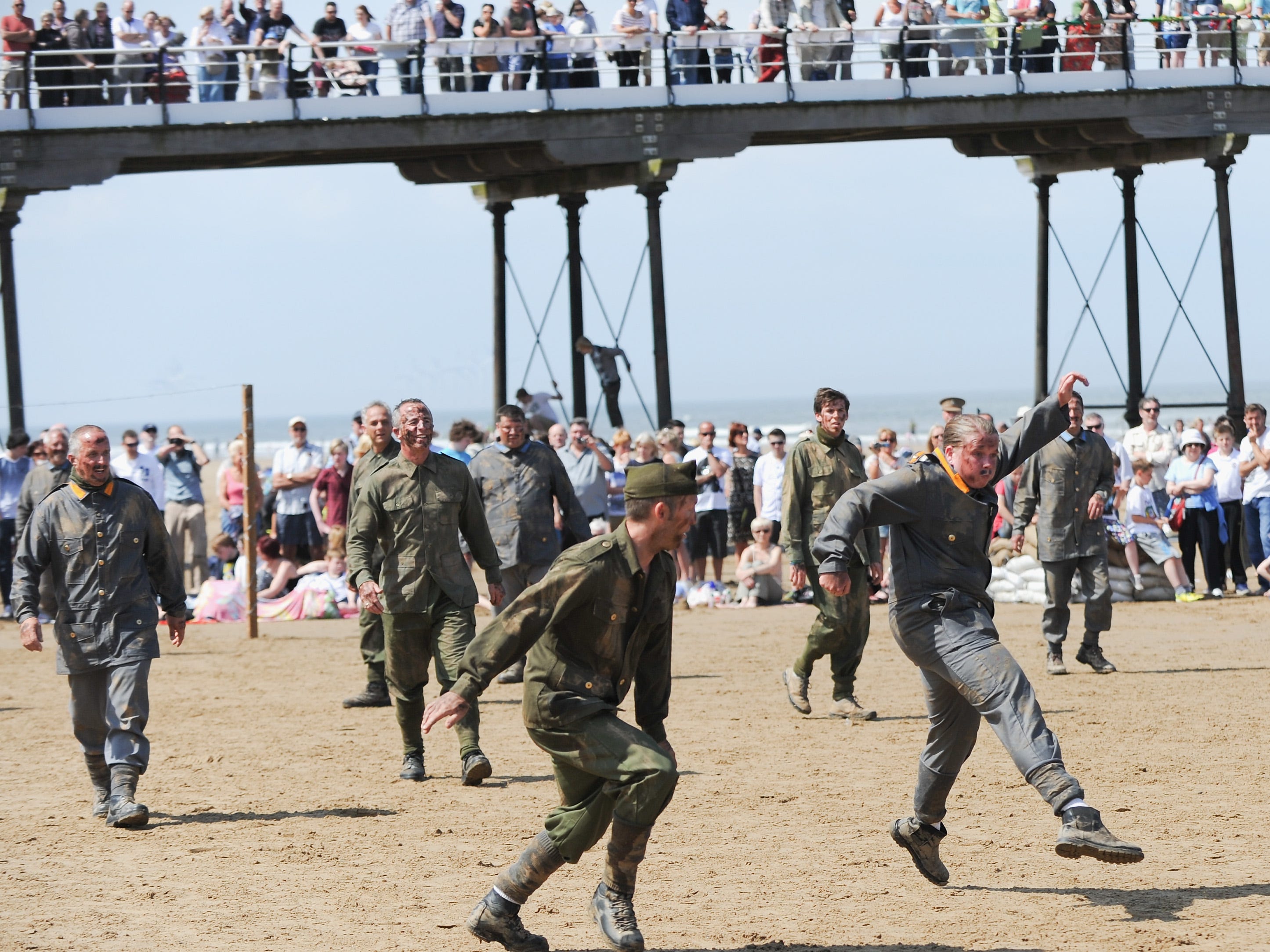 e-encators playing the British and German armies play football during a commemoration event to remember the World War one truce football match on June 1, 2014 in Saltburn-by-the-Sea, England. 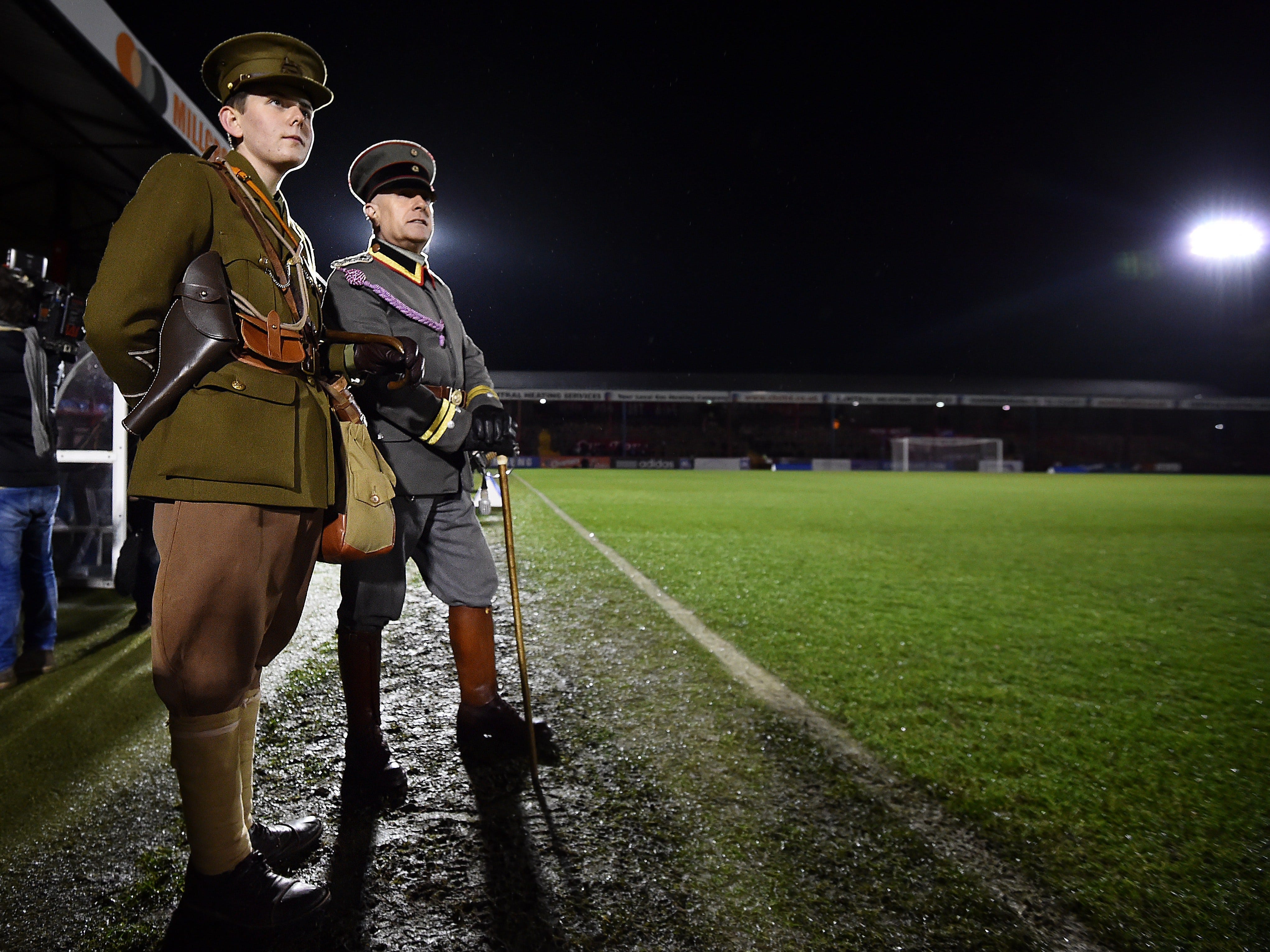 People in military WWI uniforms watch the “Game of Truce”, a recreation of a First World War Christmas truce football match, in Aldershot, west of London, on December 17, 2014.

The National WWI Museum and Memorial has created an online exhibit with a massive collection of letters, some of which were used in this article. See the exhibit and read the accounts here >>

This original version of this post was created by Ben Brimelow and published on 12/25/2017.