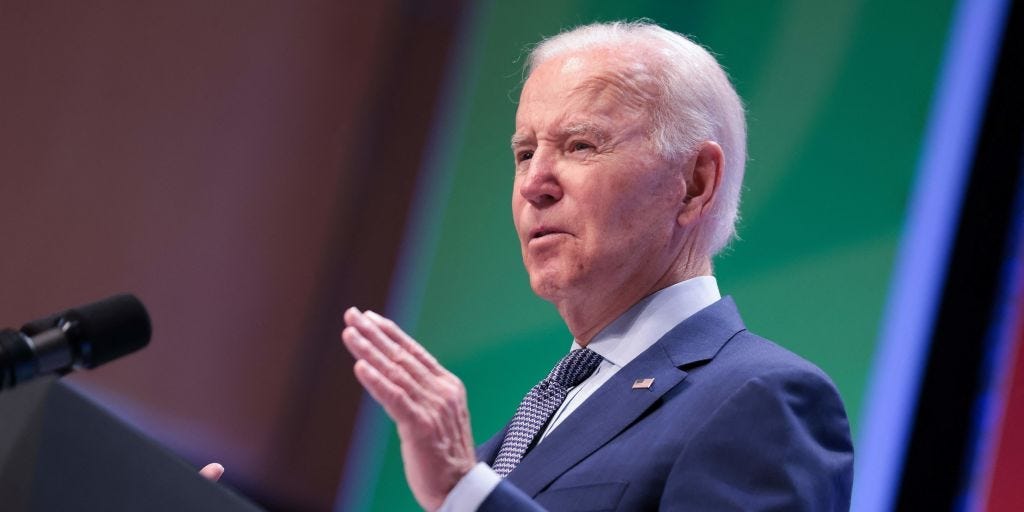 US President Joe Biden speaks during the White House Conference on Hunger, Nutrition, and Health at the Ronald Reagan Building in Washington, DC, September 28, 2022.

The existence of a second batch of classified documents in President Joe Biden’s custody was made public on Wednesday.

The first set of documents was found in November, but publicized earlier this week, as former President Donald Trump came under fire for not handing over classified documents to the National Archives.

There is a stark difference between Biden’s and Trump’s handling of the classified documents — such as a drastically higher number of documents that Trump claims he took purposefully and the fact that Biden’s office is reportedly cooperating with the National Archives, Insider reported.

Richard Sauber, the special counsel to the president, said he “periodically” worked at the Penn Biden Center, a nonprofit think tank in DC run by the University of Pennsylvania and the location where attorneys eventually found the classified documents, from mid-2017 to 2020.

Summer and fall 2022: Biden calls out Trump amid probe into classified documents found at Mar-a-Lago

The DOJ is investigating former President Donald Trump for violating three federal laws, including the Espionage Act, after news broke that he relocated roughly 700 pages of classified documents from his presidency to his Mar-a-Lago home.

The former president told his Truth Social followers that the FBI raided his home on August 8, 2022. The raid came six months after the National Archives and Records Administration confirmed that Trump had taken documents to his home at the Florida resort and after more than a year’s worth of requests for the return of the documents.

In September, President Joe Biden commented on the matter: “How that could possibly happen, how anyone could be that irresponsible.”

Months later, Biden’s team discovered about 10 classified documents at Penn Biden Center, a nonprofit think tank in DC that Biden started in collaboration with the University of Pennsylvania. Biden used the office from his time as vice president up until 2020, his special counsel would say in a later statement.

The documents were immediately turned over to the National Archives, his counsel said, but it wasn’t for another two months that the public would learn about the existence of these documents.

“The discovery of these documents was made by the President’s attorneys,” Sauber said in a statement on Monday. “The documents were not the subject of any previous request or inquiry by the Archives. Since that discovery, the President’s personal attorneys have cooperated with the Archives and the Department of Justice in a process to ensure that any Obama-Biden Administration records are appropriately in the possession of the Archives.”

Attorney General Merrick Garland has entrusted a US attorney based in Chicago to examine whether a full investigation into the matter is necessary, CBS News reported.

Trump called out his political rival on his Truth Social platform on the evening of January 9: “When is the FBI going to raid the many homes of Joe Biden, perhaps even the White House?”

The former President has claimed on multiple occasions that other presidents have done the same thing.

“As soon as his lawyers realized these documents were there, they did the right thing,” White House Press Secretary Karine Jean-Pierre told reporters on Wednesday. “And they turned over the documents to the archivist.”

She added that Biden’s team “is cooperating fully” with the Justice Department.

On January 11, it was made public that White House aides discovered a second set of classified documents, Insider’s Sonam Sheth and Nicole Gaudiano reported. However, it’s not immediately clear the number of documents found or where and when they were uncovered, NBC News reported. It’s also unknown what their classification levels are and the contents of the documents.

“He was surprised by this, he definitely, truly, respects the process here,” Jean-Pierre said of Biden at Wednesday’s news briefing. “He takes classified documents very seriously.”

According to Jean-Pierre, the content of the newly discovered documents are “something that the president doesn’t even know and I’m just going to leave it there.”