“I see the world clouded in tension,” Okonjo-Iweala told TIME Editor-in-Chief Edward Felsenthal in a keynote conversation at the TIME100 Dinner at the Alpine summit—the first to be held during its traditional winter season since 2020 due to the pandemic. “So many of the problems we have to solve today are problems of the global commons. There is no one country that can solve them alone. We need cooperation to solve these problems; we need multilateralism.”

The warning comes at a foreboding time. Set against the backdrop of an intractable war in Ukraine, a cost-of-living crisis affecting many around the world, and the devastating consequences of climate change (the reality of which has not escaped notice in Davos, where snowfall has dwindled compared to previous years), the theme of this year’s gathering is “Cooperation in a Fragmented World.” But amid so many challenges, the prospect of such cooperation seems fleeting.

Okonjo-Iweala understands these tensions better than most. As the head of the world’s largest trade body, she has observed the divisions between the Global North and the Global South. But she has also been able to engender strategic cooperation to achieve multilateral agreements in her role at the WTO, which she said she has done through sheer “bloody-mindedness,” can produce breakthroughs, even in the fraughtest of circumstances.

At Davos, politicians and corporate grandees have the opportunity to make decisions that prioritize strategic cooperation over strategic competition, Okonjo-Iweala said. If not, there is only one alternative, she said. “If we don’t cooperate on the things that matter together, then we’re going to perish together.”

Read More: The Power of Collaboration in a Moment of Crisis

That message was echoed by the IMF’s Georgieva, who warned that solving the cost-of-living crisis—which WEF identified as the biggest short-term risk in its 2023 Global Risks Report—will be impossible without first addressing the global fragmentation. “If we continue to erode the integrated global economy, it will cost the world 7% of GDP,” warned Georgieva. “If you guys don’t like inflation today, if we destroy the integrated global economy, oh brother.” 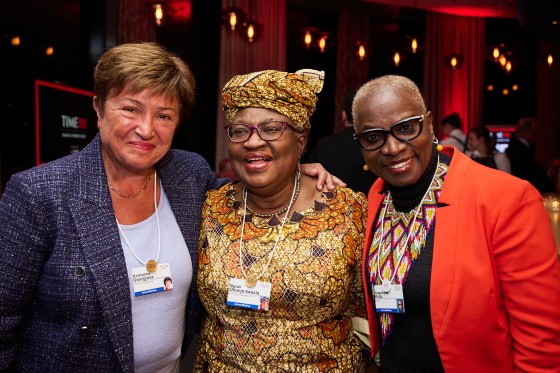 Christian Hutter for TIMELeft to right: Kristalina Georgieva, Ngozi Okonjo-Iweala, and Angelique Kidjo at the TIME 100 dinner in Davos

Paraphrasing John F. Kennedy, Georgieva said that peace leads to prosperity. Kennedy said in a 1963 speech: “Our problems are man-made—therefore, they can be solved by man.” Georgieva added a 2023 twist to that sentiment. “I would say if men can’t solve them, then women can.”

Here are some of the other biggest moments from the TIME100 Davos Dinner, produced in partnership with SOMPO Holdings.

Klaus Schwab says we are at a moment of economic “transformation”

Looking at the global economy in the year ahead, the chairman and founder of WEF said what many view as an economic crisis currently is actually an “economic transformation” that will have lasting impact. “When we speak about a crisis, we have the feeling of coming back to the old situation once the crisis is successfully overcome,” said Schwab. “We have a deep transformation of economies—delivered by the energy transformation, driven by the consequences of COVID still, driven by the reshaping of supply chains.”

Angelique Kidjo on the centrality of African women

Discussing great challenges facing the world today, singer and UNICEF Goodwill Ambassador Angelique Kidjo spoke about the integral role that African women must play in facing them. “We cannot achieve anything without the women of Africa being empowered,” said Kidjo, noting that women are “at the center of” major issues such as climate change and food insecurity. “If you’re not making progress there, all the progress we make in developed countries will be wasted because we only have one ecosystem and we all breathe the same air.”

Read More: There May Not Be Enough Food For Everyone in 2023