In Lithuania, a giant, disused electrical transformer built in 1980 in present-day Ukraine has been dusted off and prepared for shipment. It will travel by sea to Romania and then back to Ukraine, possibly in the coming weeks.

Rokas Masiulis, head of Lithuania’s power grid, said his company was searching warehouses for anything else Ukraine might need to repair the damage done to its electricity system by repeated Russian missile attacks.

“The Ukrainians say they are fine to receive anything, including things that are not working or broken, as they can fix the equipment themselves,” he told Reuters.

While the West rushes to replenish Kyiv’s stocks of arms and ammunition, countries in Europe and beyond are also in a race to supply transformers, switches and cables as well as diesel generators needed to light and heat the country in winter.

Ukraine has shared a list with European countries of some 10,000 items it urgently needs to maintain power.

Former members of the Soviet Union and the ex-Communist bloc have a major part to play based on their proximity and that some grids in the region still have hardware compatible with Ukraine’s.

Masiulis said the greatest need was for auto-transformers, like the one destined for Ukraine. Worth around 2 million euros ($2.13 million), it weighs nearly 200 tonnes and took two weeks to be stripped of removable parts and drained of oil for transport.

“We are in the process of updating our grid, and everything we strip down we send to Ukraine,” he said.
Latvia, Lithuania’s northern neighbour and also once part of the Soviet Union, said it was sending five large transformers to Ukraine, two of which were ready move soon.

Since early October, Russian forces have targeted Ukraine’s energy infrastructure, causing blackouts and forcing millions of people to endure sub-zero temperatures with little or no heating.

Moscow says the strikes are justified as part of its “special military operation” to degrade Ukrainian forces. Kyiv and the West see the barrage as a cynical attack on civilians to break their spirit and weaken the enemy.

Regional European bodies and countries including Azerbaijan, France, Latvia, Lithuania and Poland and individual companies have already sent thousands of pieces of equipment to Ukraine.

“We are searching all over the world for replacements of the equipment destroyed during the attacks,” Yaroslav Demchenkov, Ukraine’s deputy energy minister, said in early December.

Ukraine had managed to avoid a “total collapse” of the power distribution system, he said, but disruptions are significant. Some 80% of Kyiv region was without electricity for two days this week after Russian missile and drone attacks.

Estimating the total value of the support is impossible, given the fragmented and hurried nature of the response, but transformers and generators worth tens, if not hundreds of millions of dollars have been shipped.

Challenges include finding the right hardware to match Ukraine’s needs. As a former member of the Soviet Union, its power system is not always compatible with other countries, including neighbours to the north.

The supply of generators cannot match demand, company officials said, especially as some of the most necessary deliveries can take months.

“Unfortunately, high-voltage transformers, which we need the most, are not there yet,” Oleksandr Kharchenko, director at the Energy Industry Research Center based in Kyiv, said on Ukrainian state television on Wednesday.

He said there were a few in the world that could be shipped, but did not expect them to arrive before February at the earliest.

Lithuania’s transmission grid operator has already sent hundreds of smaller transformers, which reduce the voltage as it travels from power station to end-user, and its gas grid has supplied spare parts to Ukraine.

Some deliveries are in response to Ukrainian requests, while private firms there order alternative supplies to keep businesses running.

Jerzy Kowalik, commercial director of Polish power generator maker EPS System, said the company was receiving many orders from Ukraine, some for dozens of large units at a time.

“There’s a problem with the availability of engines we use amid a global boom for generators fuelled by the energy crisis,” said Kowalik. His firm of about 100 employees cannot meet demand and is turning down some requests from Ukraine.

Volodymyr Kudrystski, chairman of the management board at Ukraine’s grid operator Ukrenergo, said sourcing urgently-needed transformers was complicated by the fact that Ukraine’s standard power transmission lines are 750 kilo-volts and 330 kV. Those in neighbouring Poland, for example, are 400 kV and 220 kV.

Switches, disconnectors and circuit breakers are also crucial as some 70 Ukrenergo repair crews, or about 1,000 people, work around the clock to restore power and subcontractors have been hired.

During peak hours, Ukraine consumes around 16 Gigawatts of electricity. It can import up to 10% of that from neighbouring systems, although lines linking it to Poland were damaged in recent attacks before being restored and Romania is only a marginal source so far.

That means Ukraine is drawing on its own reserves of equipment, built up in anticipation of a possible invasion, and that were sent from abroad.

Prime Minister Denys Shmyhal said this month that 500,000 smaller generators had been imported by Ukrainian businesses, but that the country needed 17,000 large or industrial generating units to get through the winter.

Those were particularly important for critical infrastructure such as hospitals and water pumping stations.

One of the bodies overseeing energy support in Europe is the Energy Community Secretariat, an international group established by the European Union and eight member states aspiring to EU membership.

Its director, Artur Lorkowski, said more than 60 private companies in Europe from 20 countries were involved, with 800 tonnes of equipment sent already and dozens more deliveries planned.

Talks are being held through the G7 to tap companies in the United States, Canada and Japan, he added.

“This would give us the scale that would make a difference in Ukraine,” Lorkowski told Reuters.

A first tranche of U.S. power equipment worth $13 million has been shipped to Ukraine, officials said, and two more planeloads were due to leave shortly. Ukraine has also been in talks with Japan.

Lorkowski and some other officials predicted that hardware may have to be designed and built from scratch, although such a shift would require time and money.

Ukrainian officials who want to integrate Ukraine’s economy with Western Europe are considering a major overhaul of the energy sector, although patching up the current network is the priority for now.

Some imported equipment has been donated, while countries and international lending agencies are also giving loans and grants to help Kyiv afford the repairs.

Olena Osmolovska, director of the reform support team at Ukraine’s energy ministry, said it would cost tens of billions of dollars to fully restore the energy system. 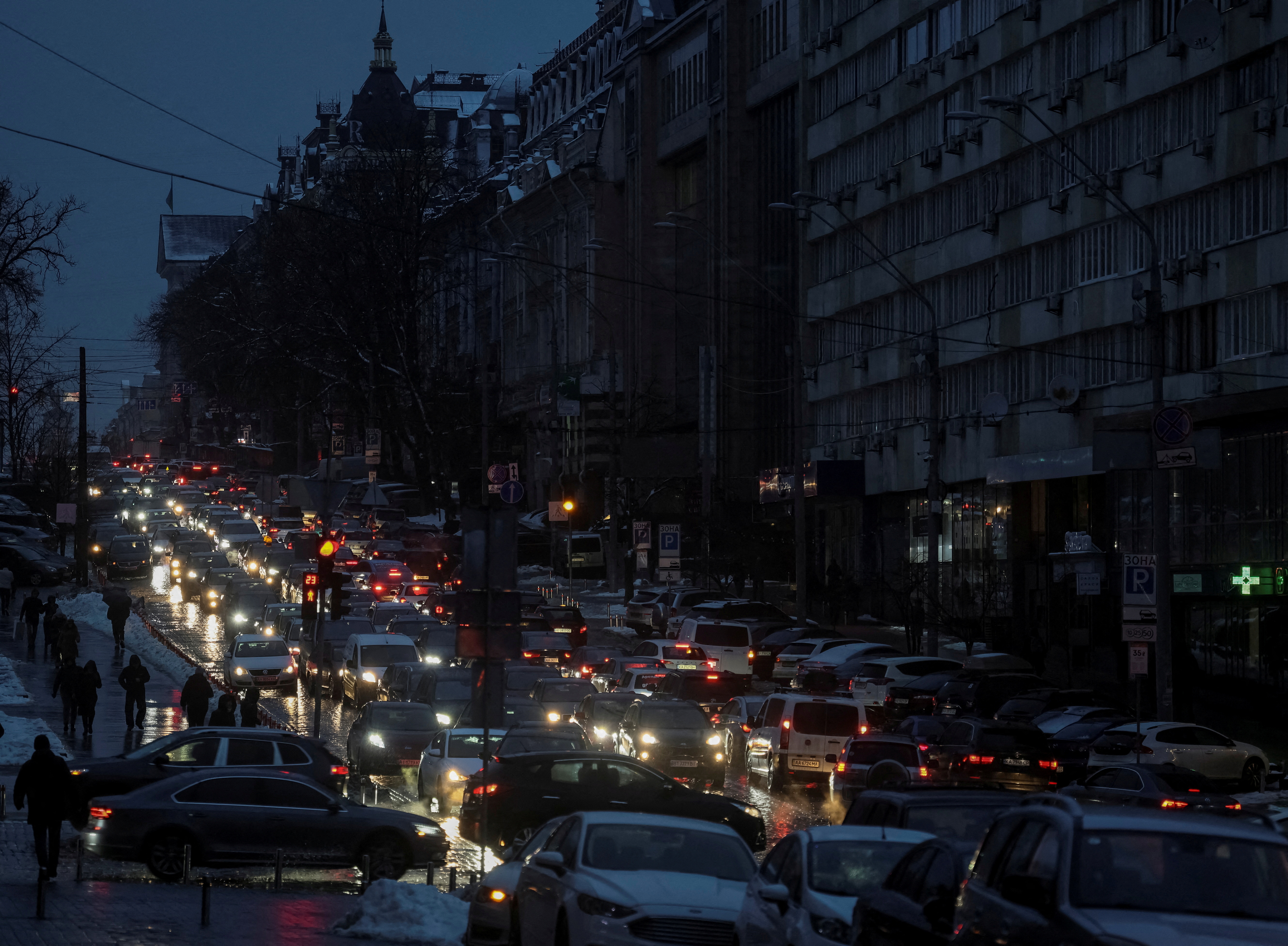 Cars are seen at a street during a transport collapse due to subway stopping during a power blackout after critical civil infrastructure was hit by Russian missile attacks in Kyiv, Ukraine December 16, 2022. REUTERS/Gleb Garanich/ 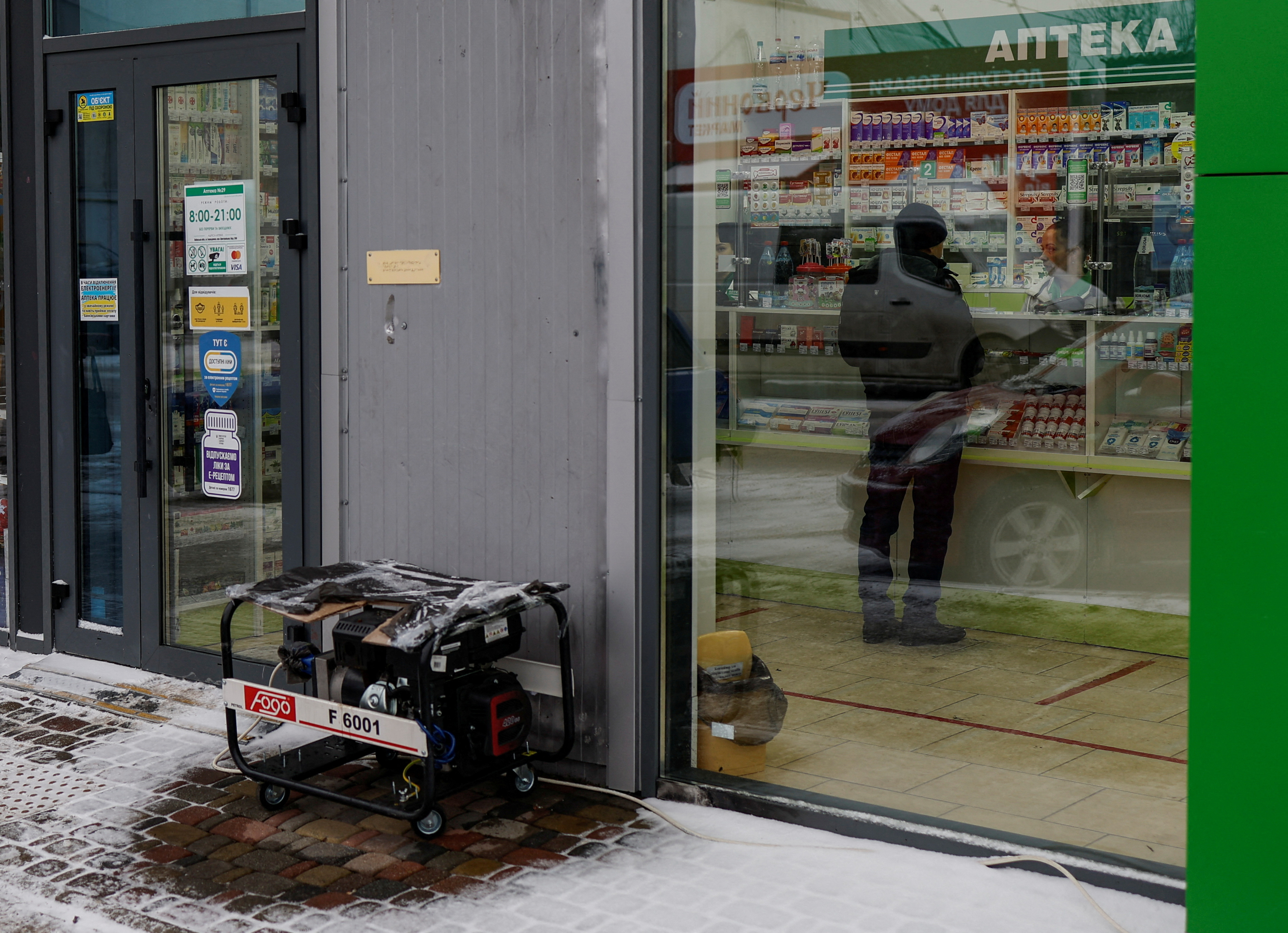 A local resident buys medicines at a pharmacy, which works with help of power generator, during an electricity outage after critical civil infrastructure was hit by Russian missile and drone attacks, in the town of Borodianka, Kyiv region, Ukraine December 15, 2022. REUTERS/Valentyn Ogirenko/ 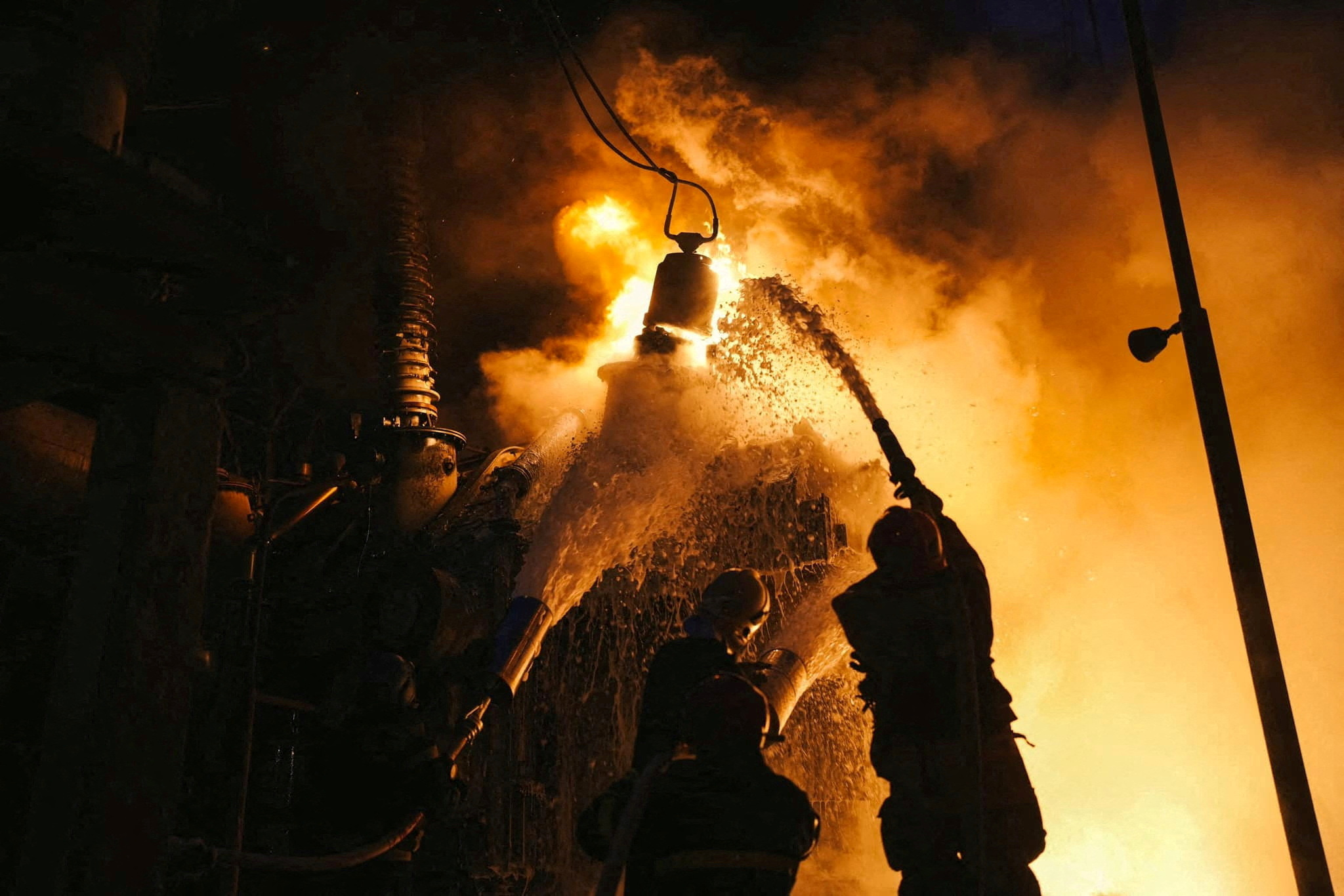 Firefighters work at a site of a critical power infrastructure object, which was hit during Russia’s drones attacks in Kyiv, Ukraine, in this handout picture released December 19, 2022. Press service of the State Emergency Service of Ukraine/Handout via REUTERS 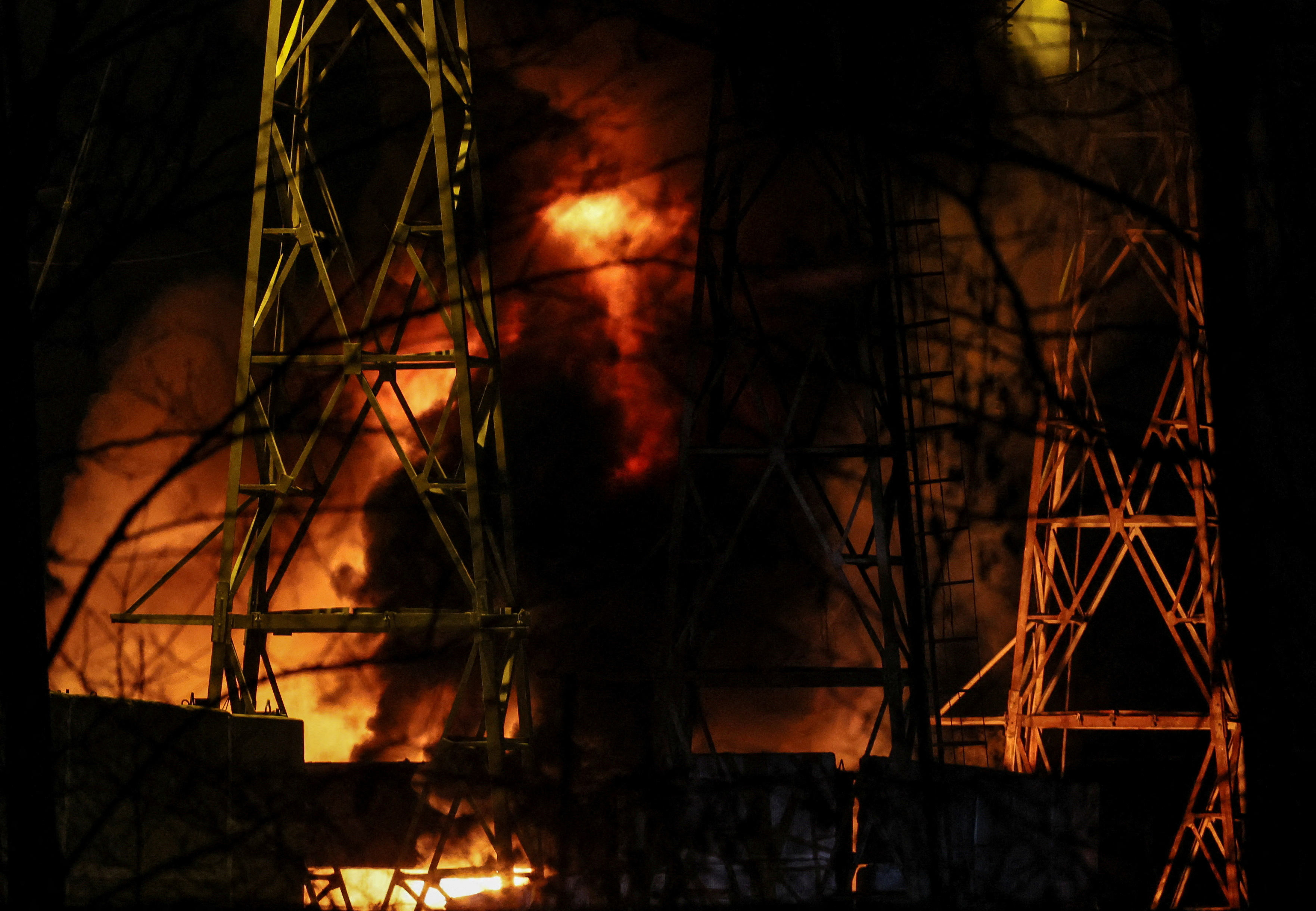