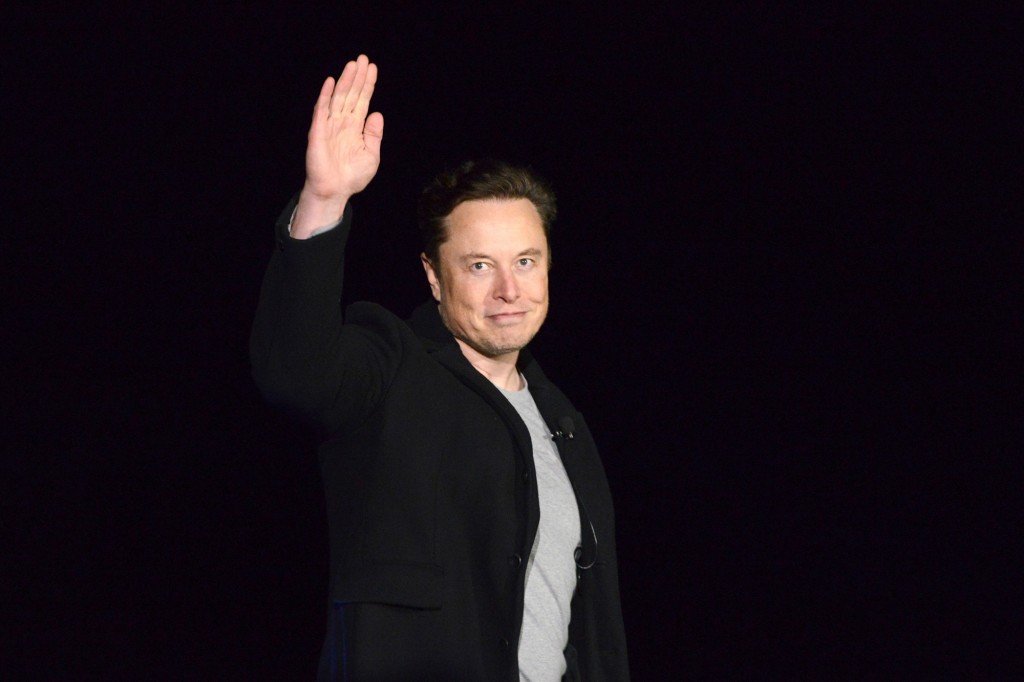 Elon Musk waves while providing an update on the SpaceX Starship, on Feb. 10, 2022, near Brownsville, Texas.


I got suspended from Twitter yesterday. I’m one of at least eight journalists who were casualties of Elon Musk’s “Thursday Night Massacre,” after the billionaire went on a power-hungry suspension spree. Twitter didn’t explain what rules I allegedly broke — but that’s to be expected under the new management, whose transparency has mostly consisted of Musk personally replying to tweets explaining his decision-making. My suspension is likely temporary, or it could be permanent. Who knows?

The suspensions made clear that, with the self-styled “free speech absolutist” at the helm, Twitter users are now subject to arbitrary censorship based on his whims. It all started when Musk suspended @ElonJet, an account that automatically tweeted the location of Musk’s personal private jet, using public flight information, along with college sophomore Jack Sweeney, who created that account. Musk then revised Twitter’s policy to justify his decision.

This sudden change to Twitter’s rules undercut a pledge Musk had made just six weeks earlier, when he tweeted, shortly after purchasing Twitter for $44 billion: “My commitment to free speech extends even to not banning the account following my plane.”

Shortly before I was suspended, I posted about Twitter banning the account of a competitor, Mastodon. Mastodon is a decentralized social network where millions of Twitter users have fled since Musk’s purchase. Before it was banned, Mastodon’s pinned tweet read, “At Mastodon, we present a vision of social media that cannot be bought and owned by any billionaire.” 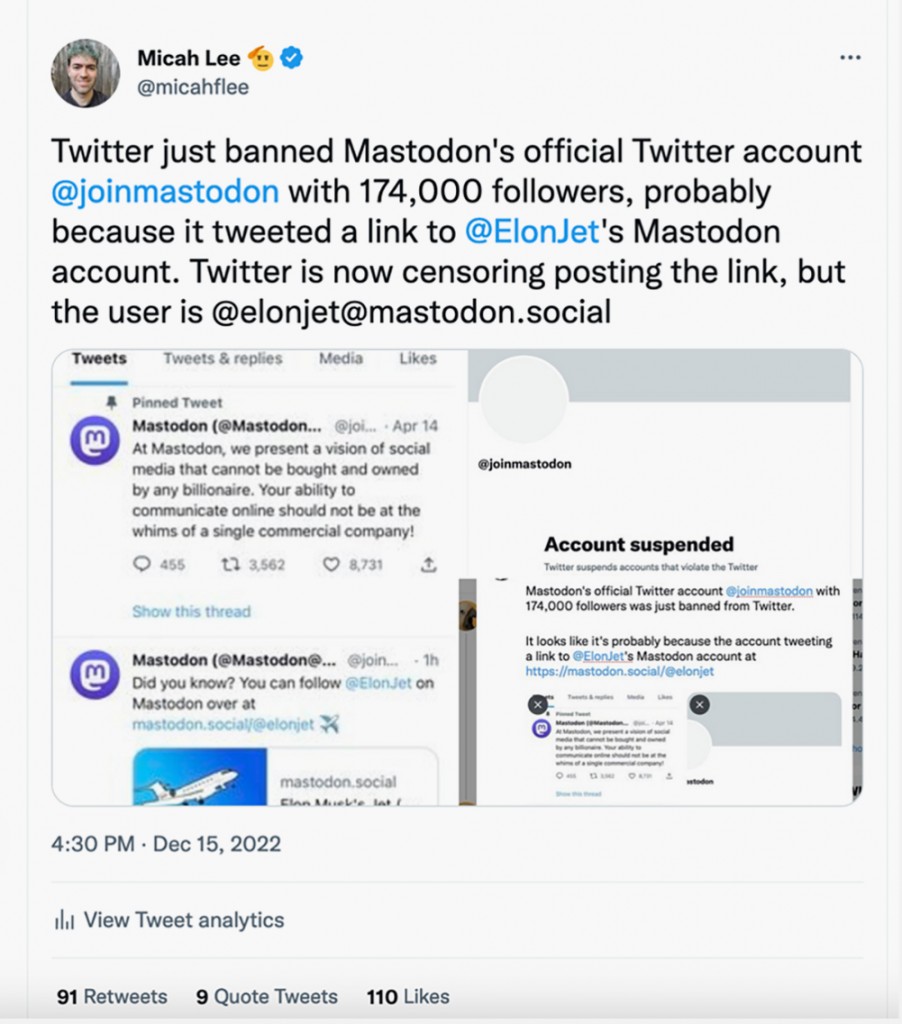 Then, after @ElonJet and reporters who wrote about it were suspended from the platform, Musk claimed that Sweeney and the journalists who reported on the account had “posted my exact real-time location, basically assassination coordinates.”

Musk also briefly joined a public Twitter Spaces audio discussion on Thursday night, which included Sweeney and at least two of the tech journalists suspended for reporting on the suspension of his accounts. Twitter’s owner insisted that he had been “doxxed” by the @ElonJet account and said that he would ban “so-called journalists” who provided links to other sites where the flight-tracking information showing his private jet’s location could be found.

Musk’s claim that he had been doxxed was challenged by Drew Harwell, a Washington Post reporter whose account was suspended for reporting on the @ElonJet account. When Harwell said that he had never shared Musk’s address, Musk suggested that any links to the flight-tracking data was the same as giving out his address. Musk abruptly left the chat after Harwell pointed out that Twitter had blocked links to the flight-tracking data on Instagram and Mastodon, “using the same exact link-blocking technique that you have criticized as part of the Hunter Biden New York Post story in 2020.”

I’ve spent the last month writing articles that point out Musk’s hypocrisy as someone who promised to be “fighting for free speech in America.” While my reporting may not have provided the direct impetus for my suspension, it’s clear Musk was taking aim specifically at journalists who have covered him critically. And the best response to that is to read the work that billionaires would prefer you don’t:

In November, I wrote about how even though Musk restored popular far-right accounts like Donald Trump and Marjorie Taylor Greene, he refused to restore the account of Distributed Denial of Secrets or to stop suppressing links to its website. DDoSecrets is a nonprofit transparency collective that distributes leaked and hacked documents to journalists and researchers. (I’m an adviser to DDoSecrets.)

During the Black Lives Matter protests in the summer of 2020, DDoSecrets published BlueLeaks, a leak of documents from over 200 law enforcement agencies that revealed police misconduct, including spying on activists. In response to apparent law enforcement pressure, Twitter permanently banned @ddosecrets and suppressed all links to ddosecrets.com.

The censorship of DDoSecrets is still happening today, two and a half years later.

Two weeks ago, my Intercept colleague Robert Mackey and I wrote about how prominent left-wing accounts were kicked off Twitter after Musk personally invited Andy Ngo, the far-right writer and conspiracy theorist who popularized the myth that “antifa” a secret army of domestic terrorists, to tell him which accounts to ban.

Twitter suspended the accounts of the antifascist researcher Chad Loder and the video journalist Vishal Pratap Singh. Twitter also suspended the account of the Elm Fork John Brown Gun Club, an antifascist group that provides armed security for LGBTQ+ events in North Texas, and CrimethInc, an anarchist collective that has published and distributed anarchist and anti-authoritarian zines, books, posters, and podcasts since the mid-1990s.

None of these accounts violated Twitter’s rules.

Yesterday, the same day I was suspended from Twitter, I wrote about how convicted U.S. Capitol insurrectionist Simone Gold, founder of the vaccine disinformation group America’s Frontline Doctors, offered to help Musk assemble a team of doctors to fact-check medical information on Twitter.

While the article was mostly about the ludicrous alternate reality of Covid deniers, it also pointed out various ways Musk himself has allowed Covid misinformation to flourish on Twitter. This includes Twitter restoring the accounts of two prominent anti-vaccine doctors, each with over a half a million followers, and one of whom falsely claimed that Covid-19 vaccines are “causing a form of AIDS.” It also details some of Musk’s own history with Covid misinformation, such as when he falsely claimed that “kids are essentially immune” to Covid, or when he promoted the discredited drug hydroxychloroquine as a Covid cure.

Maybe my Twitter account will become live again at some point. But for now, you can find me on Mastodon.

The post Elon Musk Is Taking Aim at Journalists. I’m One of Them. appeared first on The Intercept.

Home » Audio Sources - Full Text Articles » Elon Musk Is Taking Aim at Journalists. I’m One of Them.
a