Listen to this article
2023-01-11T22:24:37Z
Embattled U.S. Representative George Santos should resign from Congress after telling “lie after lie after lie” about his career and history, a group of senior Republicans from his suburban New York district said on Wednesday. This report produced by Jillian Kitchener.

Embattled U.S. Representative George Santos said he had no plans to heed fellow New York Republicans’ calls to step down, a plea they made on Wednesday due to what they called “lie after lie after lie” about his career and history.

Top House of Representatives Republican Kevin McCarthy said he had no intention of pressuring Santos, part of his narrow 222-212 majority, despite the public plea by more than a dozen top Republicans, many of them from Santos’ suburban New York City district.

The New York Republicans made their plea at a news conference two days after a nonpartisan watchdog accused Santos of breaking campaign finance laws in a filing with the Federal Election Commission.

Republican Representative Nick Langworthy from western New York and Representative Anthony D’Esposito, who represents a district next to that of Santos, were also among those calling on the first-term congressman to step down.

“I join with my colleagues in saying that George Santos does not have the ability to serve here in the House of Representatives and should resign,” he said.

Santos rejected those calls in remarks to reporters at the Capitol and elaborated on his plans on Twitter.

“I was elected to serve the people of #NY03 not the party & politicians, I remain committed to doing that and regret to hear that local officials refuse to work with my office,” he wrote, referring to the congressional district he represents.

McCarthy on Wednesday told reporters that voters, not lawmakers, should choose who represents them.

“In America today, you’re innocent until proven guilty,” he said.

Santos, who represents much of Nassau County, as well as a small slice of New York City, has admitted to fabricating much of his resume.

He won his November race over Democrat Robert Zimmerman by a margin of 7.5 percentage points.

But his victory was quickly overshadowed by media reports indicating that the persona he presented to voters was largely a work of fiction.

Among other claims, Santos said he had degrees from New York University and Baruch College, despite neither institution having any record of him attending. He claimed to have worked at Goldman Sachs and Citigroup, which was also untrue.

He also falsely said that he was Jewish and that his grandparents escaped the Nazis during World War Two.

“For him to make up this story that his parents were Holocaust survivors is beyond the pale. It is simply tragic and outrageous and disgusting,” Nassau County Executive Bruce Blakeman said. “He is a stain on the House of Representatives.”

During the news conference, officials said they would direct Santos’ constituents to Representative D’Esposito in some cases, who had agreed to help residents of Santos’ district.

Two House Democrats on Tuesday referred the matter to the House ethics committee this week. The local district attorney has said her office is investigating Santos.

If Santos were to resign, his district could make for a competitive special election.

He won his 2022 election with 52% of the vote to Democrat Zimmerman’s 45%, handing Republicans a seat formerly held by Democrat Thomas Suozzi.

The 2022 election took place with newly-drawn district boundaries. Had those lines been in place in the 2020 presidential election, Democratic President Joe Biden would won the district by eight percentage points.

Under New York and federal law, the seat would be vacant until a special election is held, which would take roughly three months. 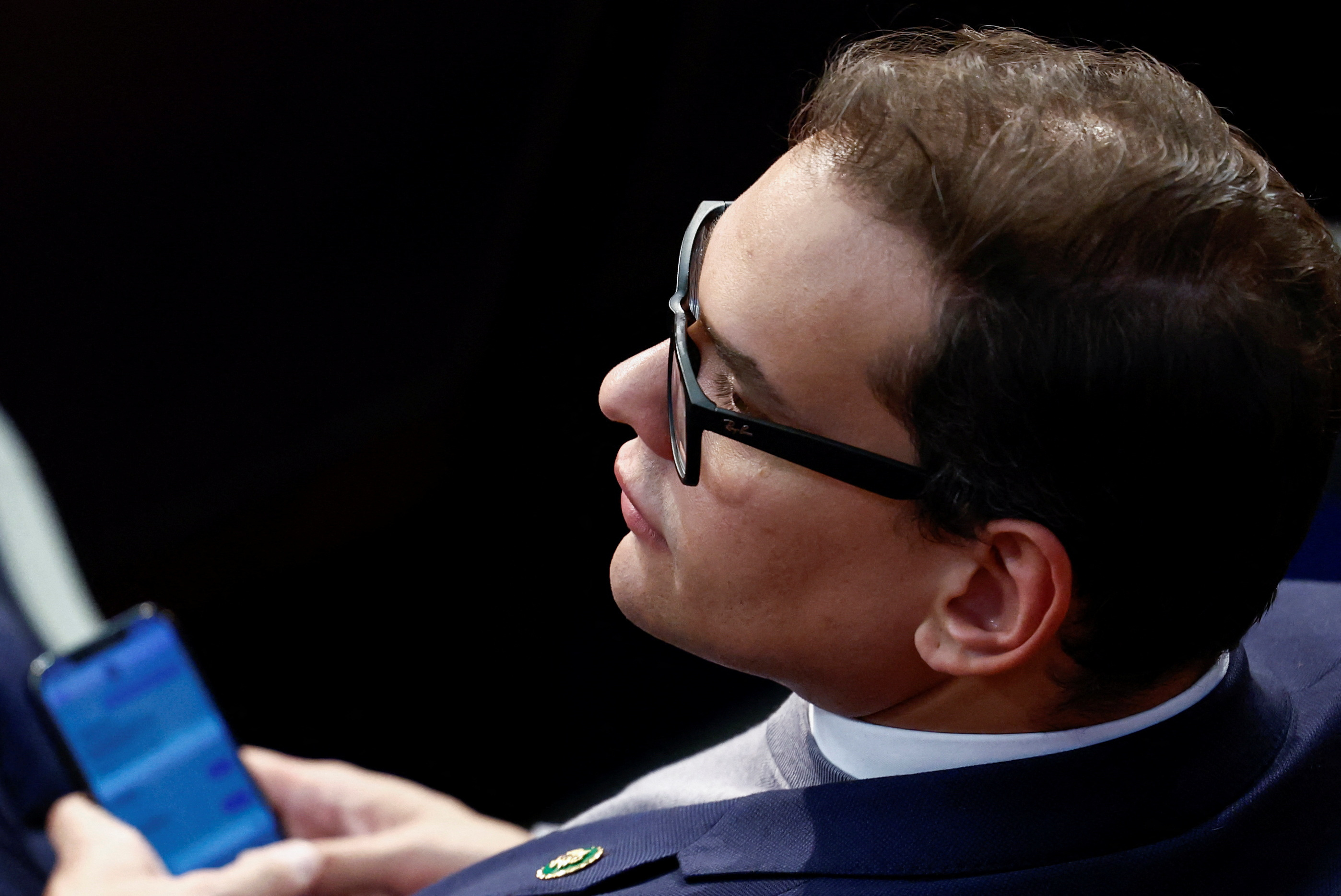 Newly elected U.S. Rep. George Santos (R-NY) sits alone on the floor of the U.S. House of Representatives during voting for a new House Speaker on the fourth day of the 118th Congress at the U.S. Capitol in Washington, U.S., January 6, 2023. REUTERS/Evelyn Hockstein 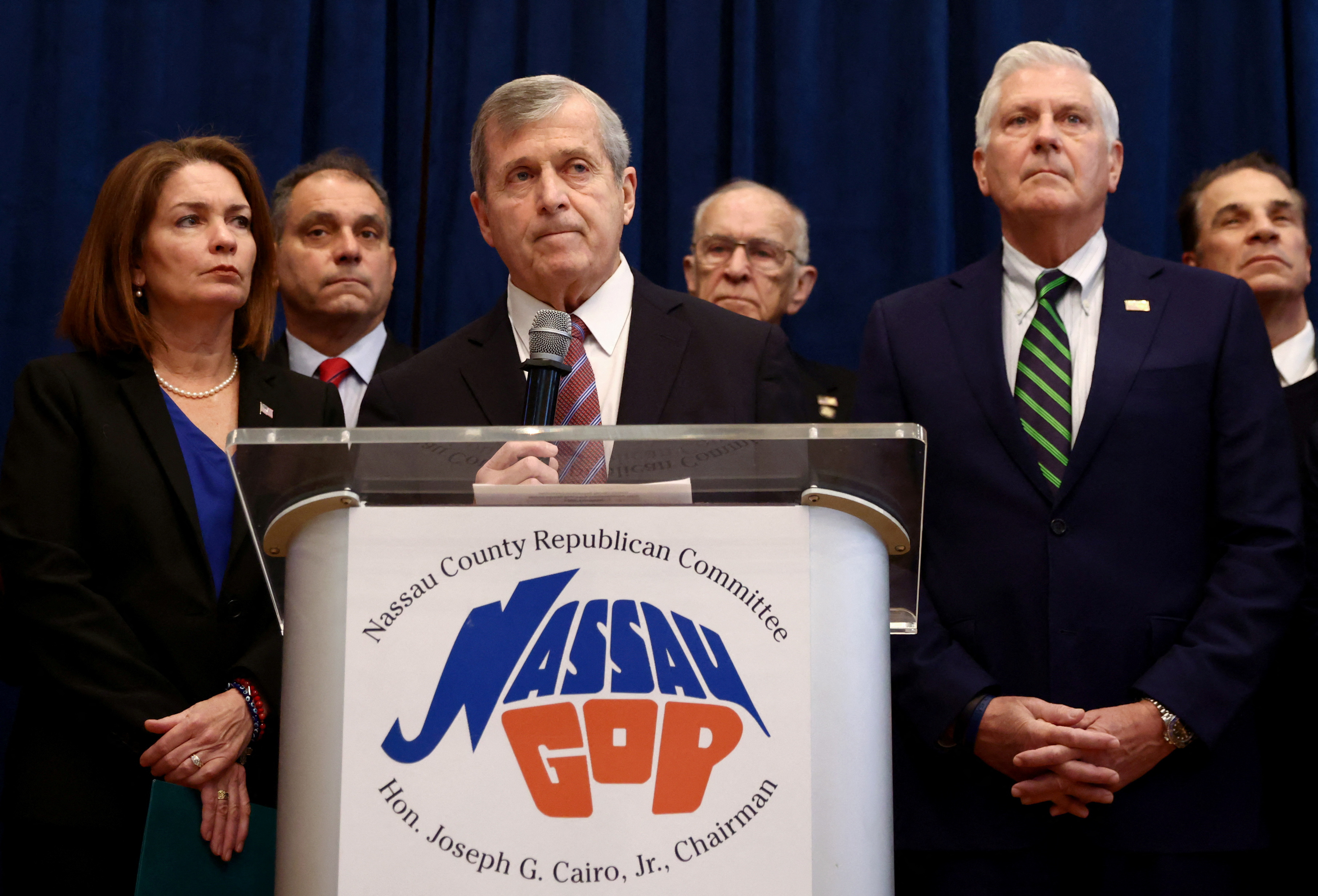 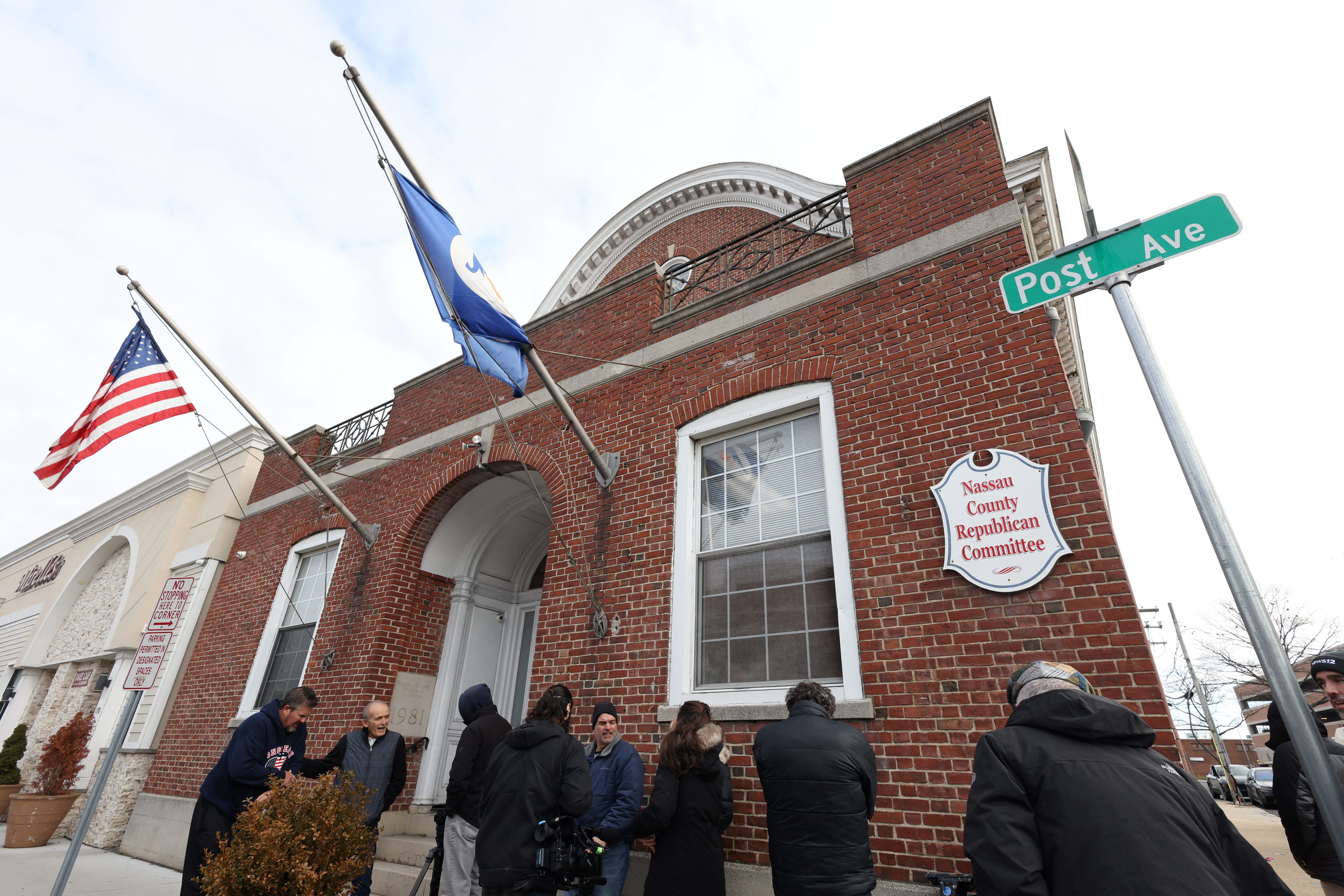 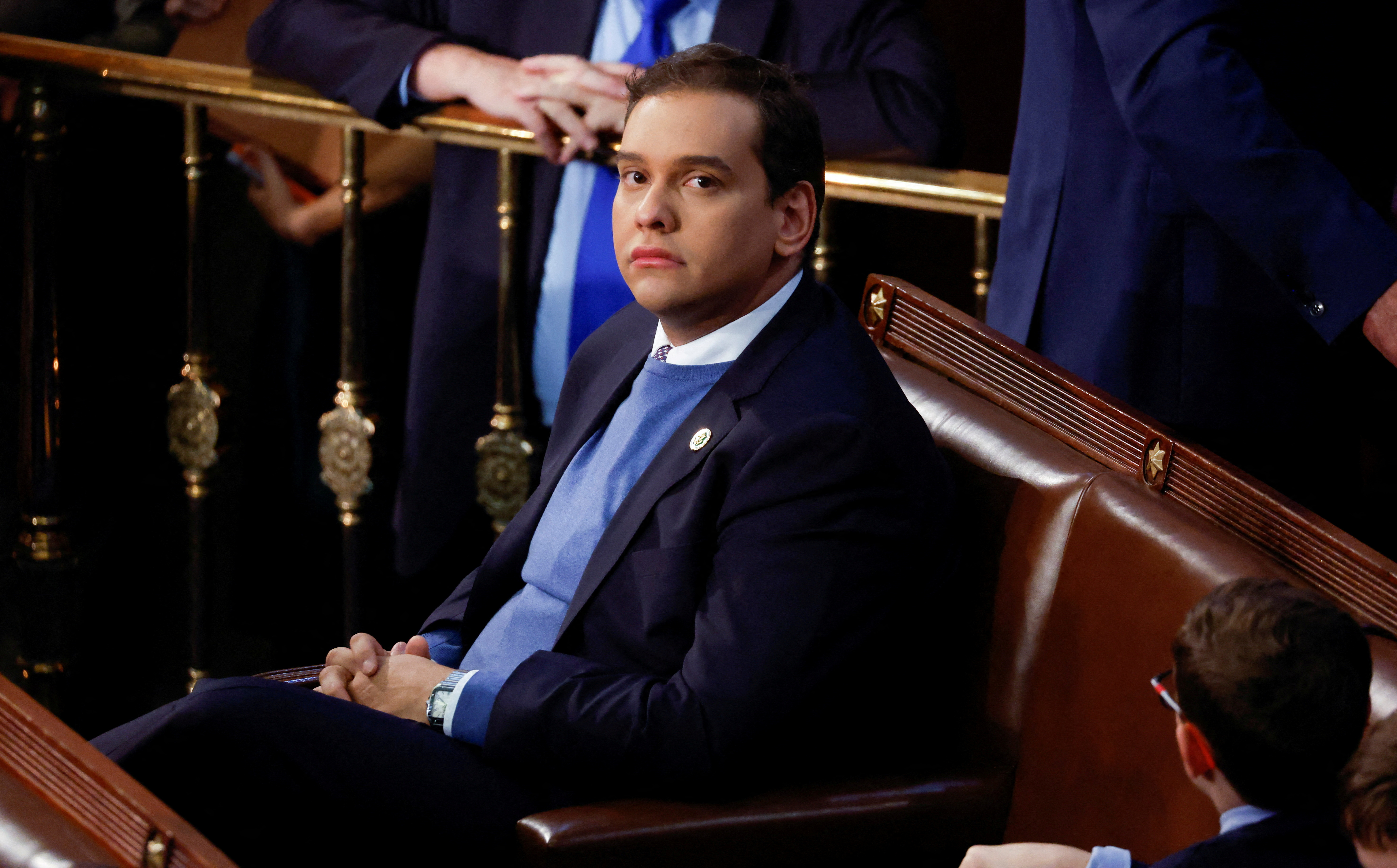 Newly elected freshman Rep. George Santos (R-NY), embroiled in a scandal over his resume and claims made on the campaign trail, sits alone in the House Chamber surrounded only by the children of other representatives, on the first day of the 118th Congress at the U.S. Capitol in Washington, U.S., January 3, 2023. REUTERS/Jonathan Ernst 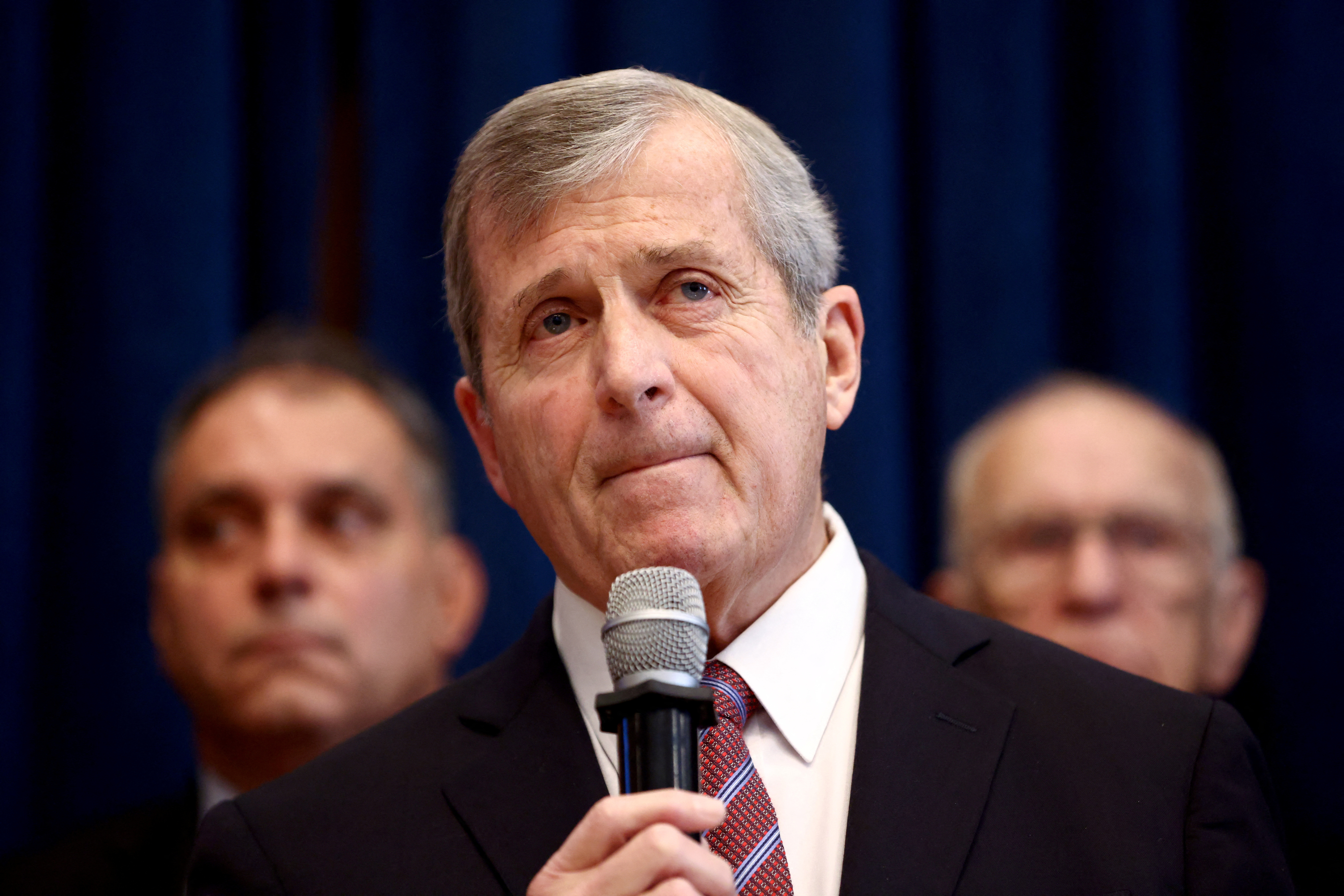