Renault (RENA.PA) is considering building a mass-market electric vehicle in India, two people with knowledge of the ongoing review told Reuters, as part of a renewed push into a market where EV adoption is expected to grow quickly from a small base.

The study by Renault underscores how the French automaker is pushing ahead with electrification plans even as it extends unresolved negotiations with its partner Nissan Motor (7201.T) about investing in an EV unit it plans to carve out from its other operations.

It also points to the shifting perception of the auto market in India, which posted the fastest growth of any major market in 2022. EVs were on track to be less than 1% of car sales last year but the government has set a target of 30% by 2030 and has had recent success in attracting suppliers for international automakers, with a range of subsidies.

Renault is studying launching a made-in-India electric version of its Kwid hatchback, the people told Reuters.

The review will assess potential demand, pricing and the ability to build the EV with local components, said one of the people, adding that any launch would be late in 2024.

The move is part of a broader plan by Renault to rekindle sales in a country where the carmaker remains profitable despite selling fewer cars in 2022 than a year earlier, the person said.

Renault India declined to comment on product plans but said the company has a “strong focus on electrification globally” as part of the strategy outlined by CEO Luca de Meo and that “India is one of the key markets” for the group.

India is set to become the world’s third-largest market for passenger and other light vehicles, displacing Japan, according to a forecast by S&P Global Mobility. Industry-wide sales grew an estimated 23% to 4.4 million vehicles in 2022.

That is a contrast to the outlook for the United States, where the market is expected to remain below 2019 levels next year, and China, where demand is weakening.

Renault had been hoping to reach with Nissan in December on the terms of a carve-out for its EV unit, but discussions have been slowed over concerns by the Japanese carmaker on a range of issues, including protection for its intellectual property.

“India will play an important role in future projects of Renault-Nissan but local plans will not be finalised before a global deal on a restructuring of the alliance is reached,” said one of the sources.

Renault already produces a version of the Kwid EV in China which is sold in that market as the City K-ZE and exported to France as the Dacia Spring. The Spring, the second most sold EV in France in 2022, has a range of 230 kilometres and a starting price of 20,800 euros ($21,869) before government incentives.

To qualify for incentives in India, Renault would have to build the car at its alliance plant in southern India and source components locally, the first person said. The India plant is majority owned by Nissan.

Renault currently produces the Kwid hatchback, Kiger SUV and seven-seater Triber in India. Its sales fell 9% to around 87,000 units in 2022 and its market share dipped to just over 2%.

As a part of the India reboot, Renault also plans to invest in refurbishing and upgrading some of its major dealerships in big cities, the person said. The company said it has 500 sales outlets in India. 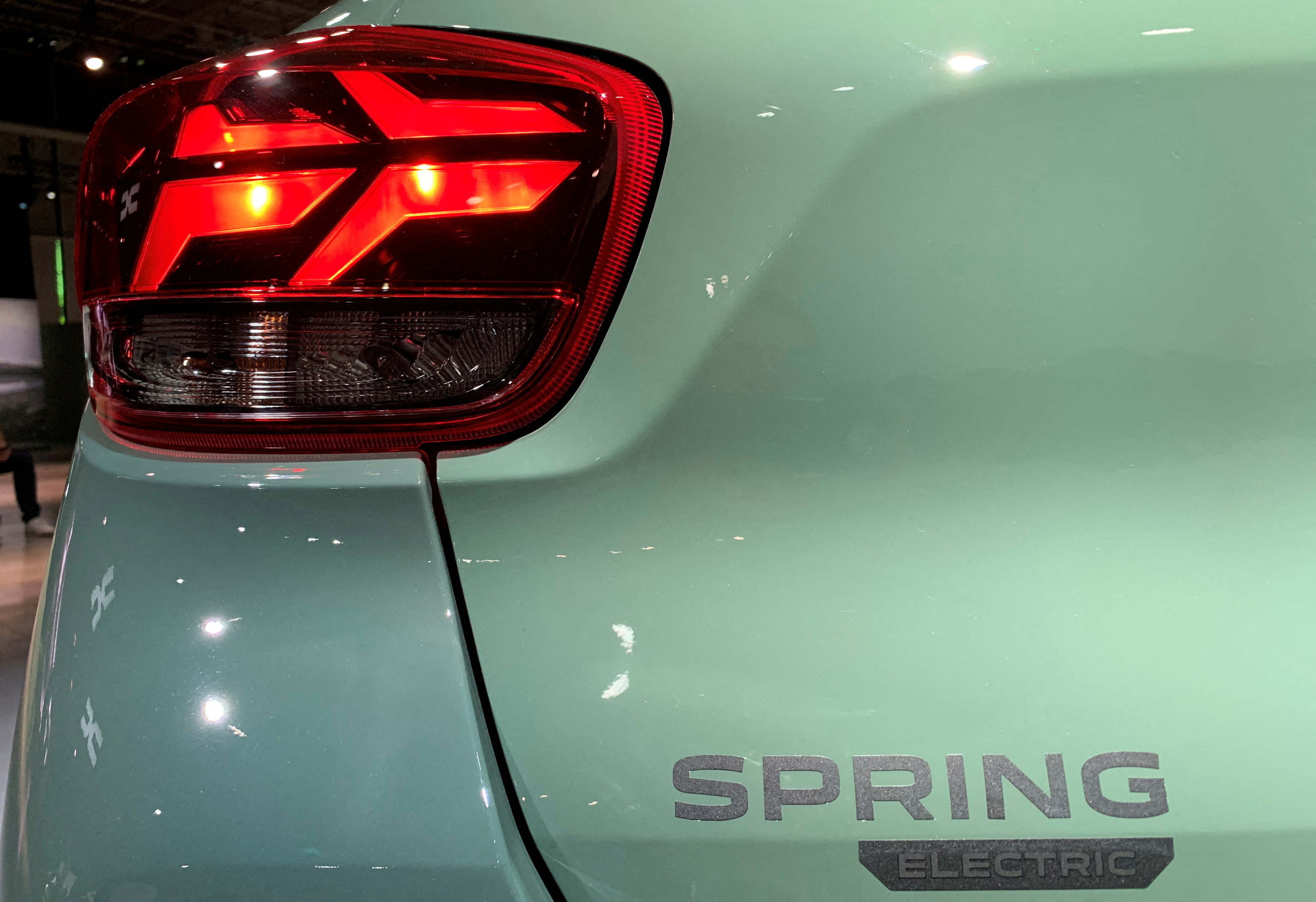 The rear light of a Dacia Spring electric car is pictured during the Brand Manifesto Dacia event at Le Bourget near Paris, France, September 13, 2022. REUTERS/Gilles Guillaume 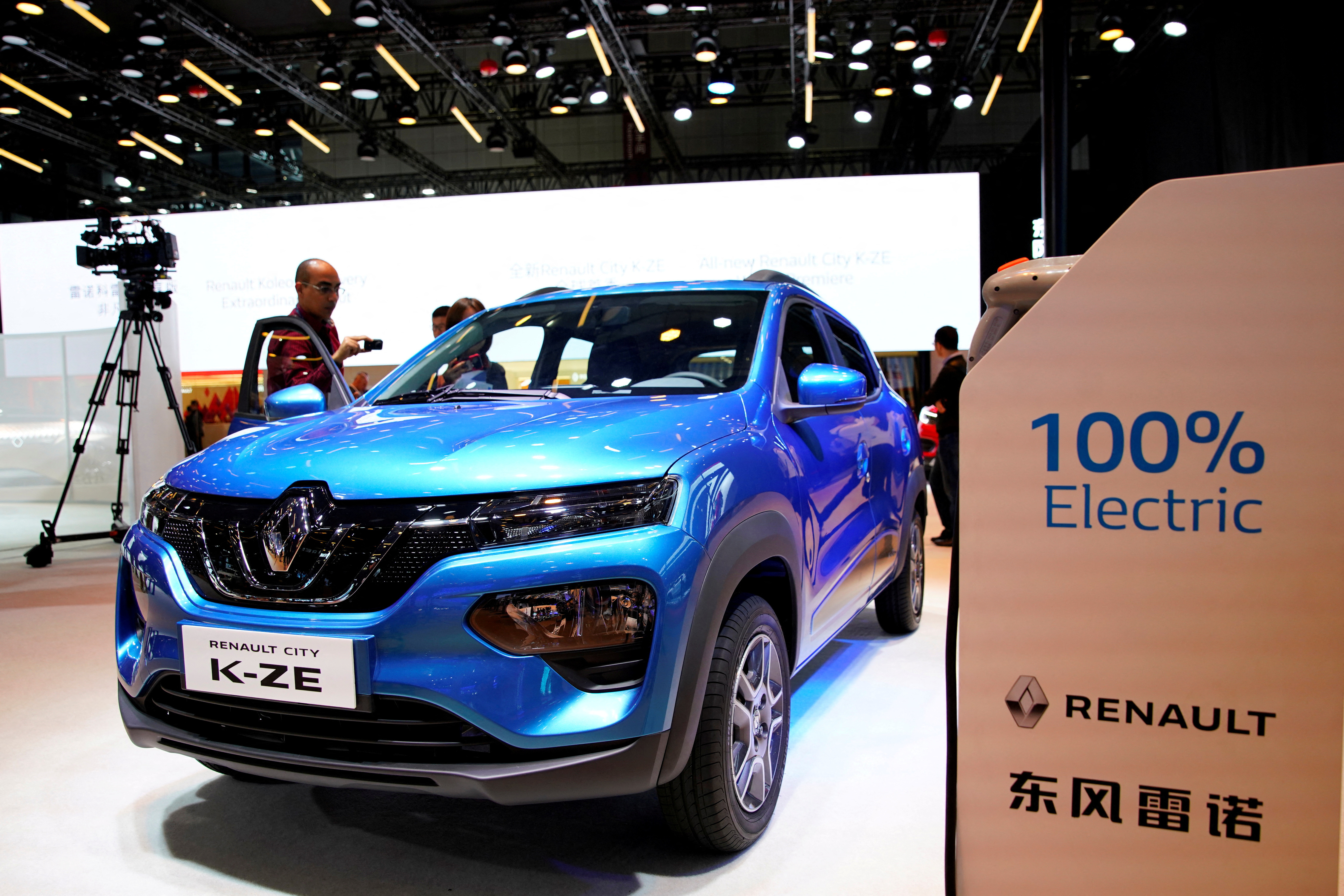