Globalization, multilateralism, and multilateral organizations have been under threat based on the perception that they have not yielded the beneficial results they promised to deliver. Against this background, it is encouraging that in recent years there have been calls for stronger, more proactive multilateral development banks (MDBs) to help address critical global challenges, such as advancing toward the Sustainable Development Goals and the Paris Climate Agreement targets. These calls included those by the G20 Eminent Persons Group on Global Financial Governance in 2018 and an “An Independent Review of Multilateral Development Banks’ Capital Adequacy Frameworks” commissioned by the G20 earlier this year (referred to henceforth as the “CAF”). The calls reached a crescendo in the run-up to the recently concluded 2022 IMF/World Bank Annual Meetings with statements by senior officials and experts calling for much expanded MDB financing, including by U.S. Treasury Secretary Janet Yellen, Minister Svenja Schulze from Germany’s Development Cooperation Ministry, Indonesia’s Minister of Finance Sri Mulyani Indrawati, Harvard University Professor and former U.S. Treasury Secretary Larry Summers, and a group of independent think tank leaders. Following its October 2022 meeting, the Development Committee of the IMF and World Bank governors called for the World Bank to develop a road map for assessing and implementing the recommendations of the CAF.

These reports and statements contain many sound recommendations for reforms of the MDBs, e.g., devoting more attention to the provision of global public goods and especially to climate action, improving MDBs’ leverage of private finance through innovative ways of derisking private investments in developing countries, and more concessional financing for middle-income countries in support of climate change mitigation programs. And, perhaps most significantly, they all call for a dramatic expansion of MDB financing.

In recent calls for greater financing by MDBs, there is a common reference to the recommendation by the CAF that MDBs more aggressively leverage their capital by relaxing what are seen as excessively conservative approaches to managing their financial risks. In particular, the CAF promotes the idea that MDBs should treat part of their callable capital as regular capital in the assessment of capital adequacy. This, along with other measures, would allow them a one-time increase in their portfolio of outstanding loans potentially by hundreds of billions of dollars over their current exposure ceilings—Minister Sri Mulyani cited $500 billion, a figure commonly associated with the CAF but not actually found in the report. This sounds like a very attractive option since it appears to expand MDB financing in a costless way, but it is worth remembering that “free lunches” can in fact be very costly. This blog explains why including callable capital along with regular capital is not a good idea and considers alternative options for expanding MDB finance.

Member countries contribute two types of capital to the MDBs: “paid-in” capital, which is paid in by member country governments as shareholders at the time of the establishment of the bank or during a capital increase (or on an agreed schedule over time), and “callable” capital, which is paid by shareholders only if and when regular capital (paid-in capital and accumulated reserves) is insufficient to pay bond holders. But since callable capital protects bond holders, rating agencies recognize it along with regular capital, and hence MDBs can borrow against it at very favorable terms (AAA in most cases) in amounts that are a multiple of what they could borrow if they only had their paid-in capital. In other words, MDBs can leverage by a multiple the limited paid-in capital that member countries contribute out of current budgets.

However, it is important to remember that callable capital only protects bond holders. It does not guarantee that the MDBs can continue functioning once capital is called. Since there is no history of callable capital being called and no standard practices are in place to respond to a call on capital, the process of a call on capital will be messy and time-consuming. In the meantime, the ability of the MDBs to continue operating will be severely constrained, as they would likely have to cease all new lending and even disbursements on existing loan commitments, just when their financing is most needed. Moreover, most governments contribute callable capital on the presumption that it will never be called. Once capital has been called for one or more major MDB, the basic MDB financial leverage model will be threatened, since member countries will no longer be able to operate on the assumption that callable capital will not be called and likely will not be as ready to contribute such capital.

So what does a financial manager in an MDB have to do to protect the shareholder governments against a call on capital and ensure the survival of the MDBs during financial crises? The best way to do this is to minimize the threat to callable capital, or in other words, to ensure with appropriate stress tests that the institution has enough regular capital (paid-in capital and reserves) and liquidity to withstand any potential non-payment scenarios.

There can of course be arguments about how stress tests are conducted, how probabilities of debtors’ failure to pay are assessed, and what assumptions are made about the likelihood of systemwide financial crises. And it is possible that the MDBs’ financial managers have been excessively conservative in their assessment of these variables. This is what the CAF concludes, a conclusion buttressed by the commentary of rating agencies on the CAF. However, to arrive at a conclusion of exactly how much to relax current policies would require a thorough understanding of the risk management approaches currently used by each MDB and of the risk appetite of the MDB shareholders.

In any case, it would be wrong to simply equate callable capital, or portions thereof, with paid-in capital. Such an approach blurs the line between the two types of capital and the fundamentally different roles they play. Callable capital protects bondholders, while regular capital protects the functioning of the MDBs as on-going institutions, the system of MDB leverage, and the budgets of shareholder governments. Shareholders should be very clear in considering what the risks are to MDB survival and to their budgets when they decide whether or not they want to expose callable capital to increased risk.

The CAF cites the Interamerican Development Bank (IDB) as an MDB that adds a portion of callable capital to its regular capital and recommends that other MDBs consider following the IDB example. The CAF notes that this follows an approach “validated by the rating agencies” and that the rating agencies still maintain an AAA rating for IDB despite its practice. But, as noted above, rating agencies only consider bondholder interests, not shareholder interests, and therefore their approach is not relevant to how to shareholders should treat callable capital. Shareholders should consider whether or not IDB is adequately protected against a call on callable capital which requires the kind of stress tests and risk considerations mentioned above.

Other arguments for raising MDB financing without increases in capital

One of the arguments in favor of increased risk-taking cited by the CAF is that it finds rating agencies and MDB financial managers have treated MDBs’ preferred creditor status (PCS) much too conservatively. PCS is an informal, i.e., not legally binding understanding that MDB borrowers will service their MDB debts even if they default on other debts. PCS has indeed been an important feature lowering financial risk for MDBs and has been treated as such by the rating agencies and the MDBs’ financial managers. A reassessment of the role of PCS may be appropriate, based on the findings of the CAF. But in assessing how much protection PCS affords to each MDB and to the system as a whole, it is important to note that for each MDB the protection is diluted due to the rapid expansion in recent decades of the number of MDBs claiming PCS. While in the 1950s and into the 1960s only the World Bank claimed such status, there are now some 40 MDBs doing so. The big question is what happens if one of them de facto loses PCS. Will this break the dam and mean that others too will no longer be protected as in the past? Caution is in order here.

Another option for stretching the MDB capital has been advanced in the literature, namely, accepting a lower rating by the rating agencies. However, going for a lower than AAA rating for institutions like the World Bank makes little sense, since the callable capital constraint is in fact the binding one. Rating agencies know this and will continue to provide top ratings, as long as MDBs protect their callable capital as they have in the past.

Raising or backstopping MDB capital is the principal solution

So what else can be done to expand MDB financing capacity substantially? The most obvious solution, recommended by Larry Summers as well as the group of independent think tank leaders, is a sizable capital increase for the MDB system. Since the miracle of callable capital means that only a small fraction, as low as 2 percent in some recent capital increases, has to be paid in, the budgetary cost to members is minimal relative to the benefit of expanded MDB lending potential. Based on the experience drawn from the World Bank and IFC capital increase of 2018, a one-time capital increase of $32 billion would allow increased lending of $100 billion per year, or $500 billion over five years. Another option is for IMF resources (Special Drawing Rights) to be made available to the MDBs for on-lending or as capital. A third option is to have the IMF serve as a lender of last resort for MDBs (similar to the role that the national central banks play for commercial banks, and as the European Central Bank plays for the European Investment Bank), which would allow MDBs to take a more aggressive approach to manage their liquidity. Each of these options undoubtedly has its own costs, risks and limits, but these are likely much less severe than misunderstanding the role that callable capital plays in MDB finance or trusting too much in the preferred creditor status of the MDBs. 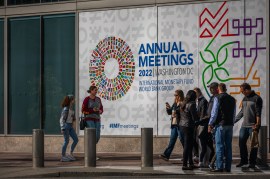