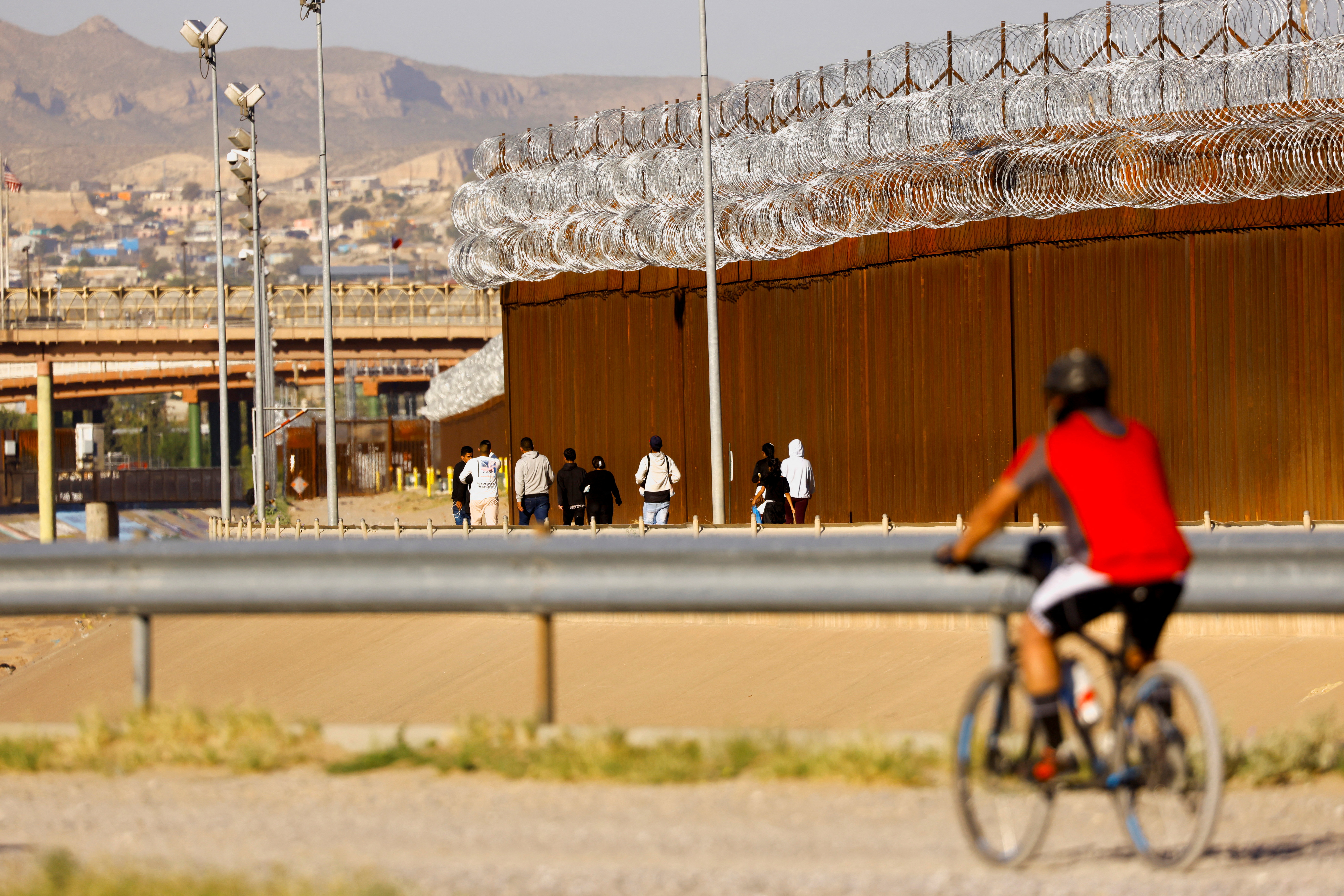 Asylum-seeking migrants, mostly from Venezuela, walk near the border wall after crossing the Rio Bravo river to turn themselves in to U.S. Border Patrol agents to request asylum in El Paso, Texas, U.S., as seen from Ciudad Juarez, Mexico, September 17, 2022. REUTERS/Jose Luis Gonzalez

Pandemic-era border restrictions that have blocked hundreds of thousands of migrants at the U.S.-Mexico border are set to end on Dec. 21 following a U.S. judge’s ruling that found the limits unlawful, but an ongoing legal battle could delay that timeline.

At the start of the COVID-19 pandemic in March 2020, U.S. health authorities issued an order, known as Title 42, that allows border agents to rapidly send migrants crossing the U.S.-Mexico border back to Mexico or other countries.

The order was implemented under Republican former President Donald Trump, whose administration sought to greatly curtail both legal and illegal immigration. The U.S. Centers for Disease Control and Prevention (CDC) said at the time it was needed to stem the spread of COVID-19.

Some public health experts, Democrats and advocates criticized the order, saying it unlawfully blocked migrants from claiming asylum and subjected them to dangers, like kidnapping and assault, in Mexico.

While Biden moved to end some Trump restrictions, he left Title 42 in place for more than a year, exempting unaccompanied children but allowing U.S. authorities to send hundreds of thousands of migrants, including families, back to Mexico.

Since Biden took office, there have been record numbers of migrants caught crossing the U.S.-Mexico border, causing operational and political challenges for his administration. Many have repeatedly crossed after being expelled under Title 42 to nearby Mexican border cities.

Mexico accepts Mexicans, Guatemalans, Salvadorans, Hondurans and Venezuelans returned under Title 42, but other nationalities are generally let into the United States to pursue their immigration cases.

This week, a large group of about 1,500 migrants lined up at the border near El Paso, Texas, waiting to be processed.

Mario D’Agostino, El Paso’s deputy city manager, told reporters on Tuesday that the arrivals were “unsustainable” and that the city had asked the Biden administration to consider processing migrants at military bases or increasing flights to move migrants to other parts of the border.

A U.S. Department of Homeland Security (DHS) spokesperson said the department is “working according to plan to quickly decompress the El Paso area.”

The CDC announced in April that it would end Title 42, saying it was no longer needed to limit the spread of COVID-19 in light of vaccines and other medical advances.

But a federal judge in Louisiana blocked the termination after a legal challenge brought by a group of two dozen U.S. states with Republican attorneys general who argued that increased migration would saddle their states with costs.

In a separate lawsuit, brought by the American Civil Liberties Union (ACLU) and other groups on behalf of migrant families who argue they were harmed by Title 42, a Washington, D.C.-based judge struck down Title 42 on Nov. 15.

The judge, U.S. District Judge Emmet Sullivan, ruled Title 42 violated federal regulatory law but delayed the effective date of his decision until Dec. 21 to give authorities time to prepare.

Following the ruling, a coalition of U.S. states with Republican attorneys general sought to intervene in the lawsuit to keep Title 42 in place.

In arguments similar to those made in the Louisiana case, the states said that ending Title 42 would “cause an enormous disaster at the border” and leave them shouldering the cost of services for new arrivals.

If the D.C. Circuit denies the states’ motion, they could appeal the matter to the conservative-leaning U.S. Supreme Court.

While the Biden administration last week appealed Sullivan’s decision to preserve the authority to implement such public health measures in the future, it did not seek to delay the termination.

At the same time, the administration is preparing for a possible increase in border crossings if Title 42 is ended and has privately considered implementing Trump-like asylum restrictions as a way to deter migrants, Reuters and other outlets reported earlier this month.

Some ideas that have been under discussion include a regulation that would bar single adults from seeking asylum at the southwest border and accelerated asylum screenings in U.S. Border Patrol custody.

The Biden administration has said it will increase the use of expedited removal, a fast-track deportation process, if Title 42 is terminated.

The plans may be unnecessary if the U.S. states’ effort to keep Title 42 in place succeeds, maintaining the status quo.

Home » Audio Sources - Full Text Articles » Explainer: U.S. pandemic border entry limits on migrants due to end next week. Will they?
a