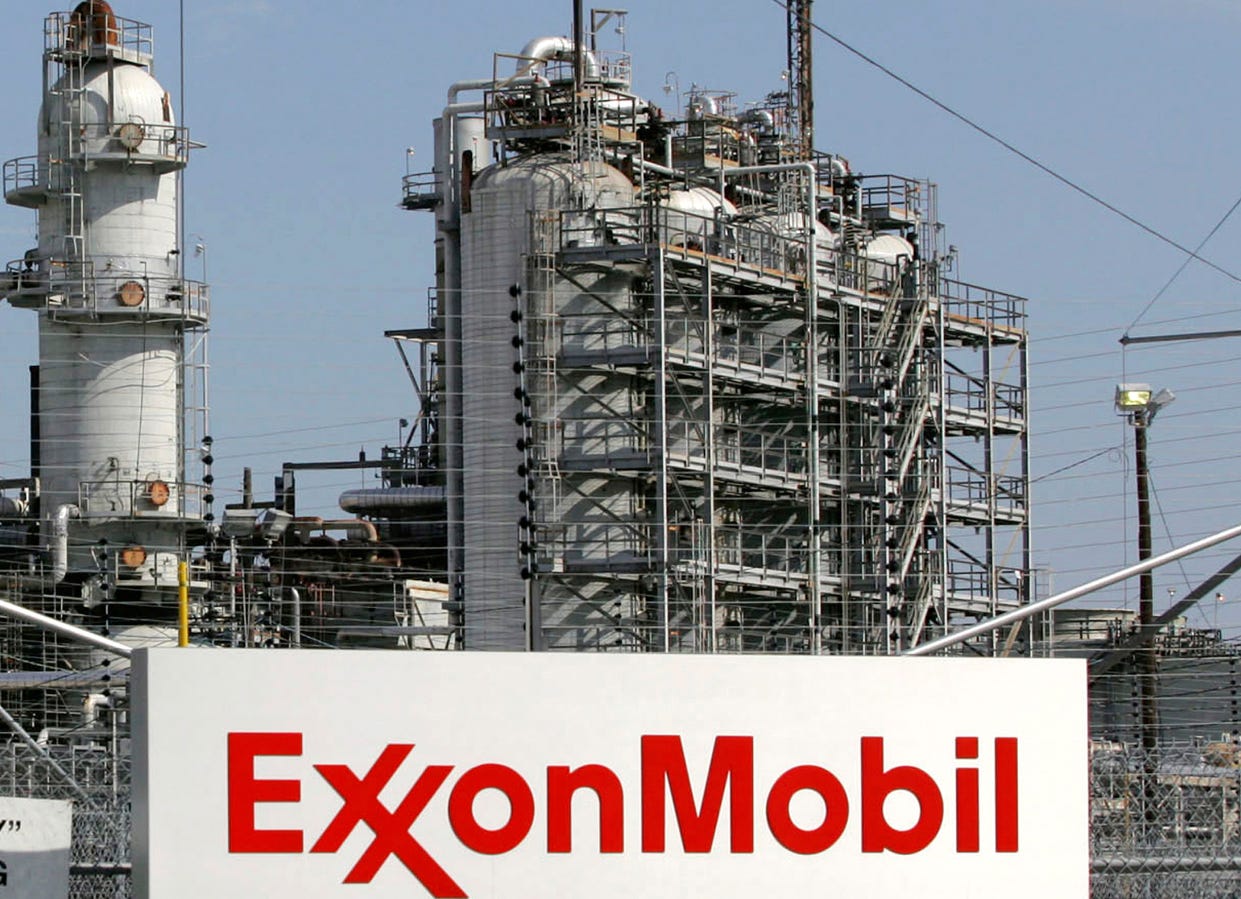 The new analysis on the precision of company scientists’ predictions could be powerful fuel for cities and states that are suing ExxonMobil, accusing the fossil-fuel corporation of violating consumer-protection statutes, lying to investors, or committing racketeering.

“This analysis is a stick of dynamite in these cases,” Patrick Parenteau, professor and senior fellow of climate policy at Vermont Law School, told Insider in an email. “It is the kind of incriminating evidence that can really influence a jury.”

Published in the peer-reviewed journal Science on Thursday, the study compares early ExxonMobil climate models to those from other scientists at the time, and to the actual rise in global temperature that has occurred since then.

According to the study, 63% to 83% of global warming projections from the company’s scientists have turned out to be accurate matches of real-life temperature rises in the decades since.

These projections had an average “skill score” of 66% to 78% — higher than the scores ranging from 38% to 66% reported by NASA scientist James Hansen when he testified to Congress in 1988. 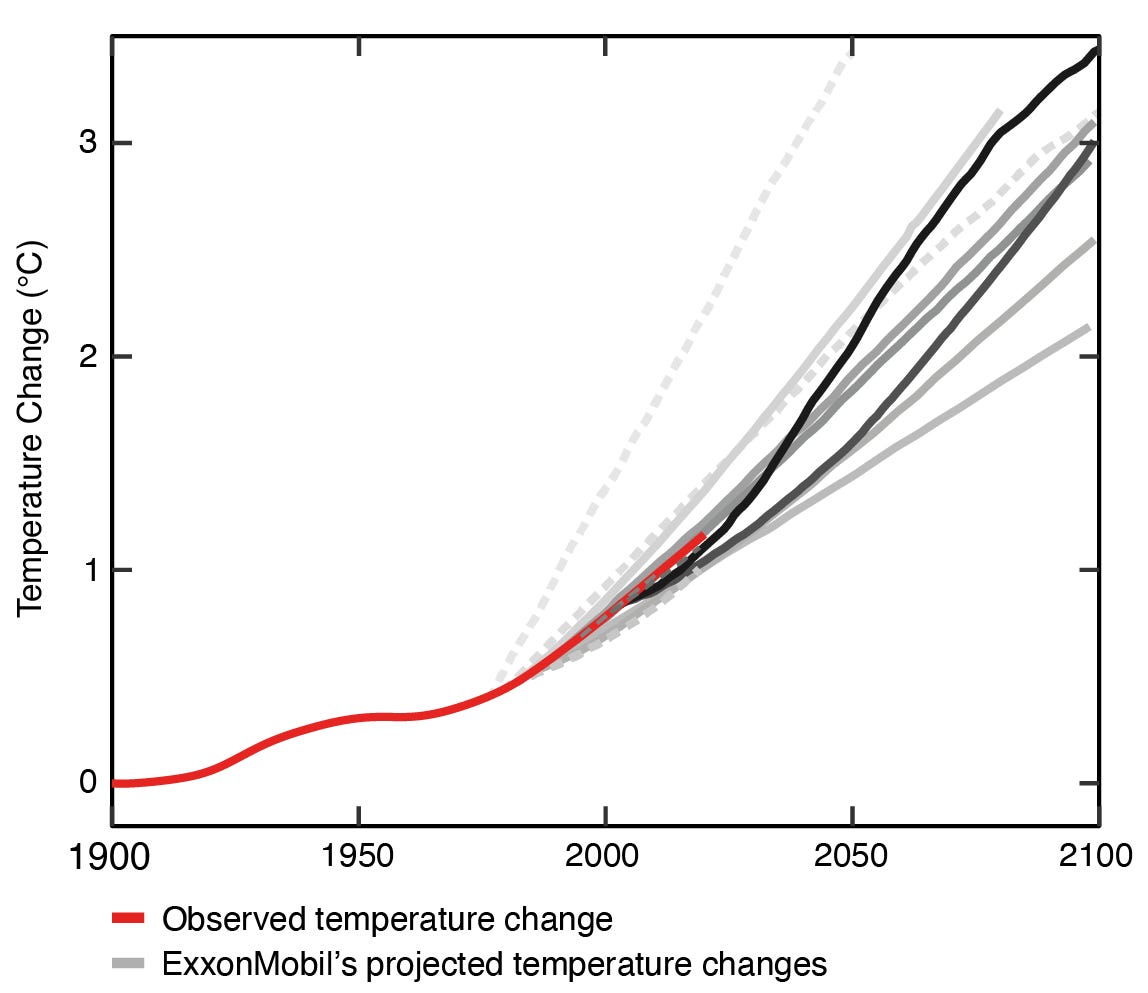 A graph from the study, showing ExxonMobil’s projections compared to observed changes in temperature.

Despite having this precise information about the consequences, ExxonMobil publicly denied that global warming would happen, spent decades attempting to discredit public research that predicted it, and touted the myth that the planet was actually cooling.

At the same time, the company shored up its infrastructure against the coming climate changes.

“That is arguably quite malicious conduct to not only continue your business, but to indeed accelerate production,” Karen Sokol, a professor specializing in climate law and policy at Loyola University New Orleans College of Law, told Insider.

“Right now we’re at a point where it’s getting increasingly painful and expensive to exit a fossil fuel economy,” she said, pointing to the energy crisis in Europe. “There was a time when we could have done this in a much calmer way where there wasn’t as much damage.”

Todd Spitler, a spokesperson for ExxonMobil, sent the following statement to Insider via email: “This issue has come up several times in recent years and, in each case, our answer is the same: those who talk about how ‘Exxon Knew’ are wrong in their conclusions.”

“Some have sought to misrepresent facts and ExxonMobil’s position on climate science, and its support for effective policy solutions, by recasting well intended, internal policy debates as an attempted company disinformation campaign,” Sptiler added. “ExxonMobil’s research in climate science has resulted in nearly 150 papers, including more than 50 peer-reviewed publications that the Company has made available to the public. ExxonMobil’s understanding of climate science has developed along with that of the broader scientific community.” 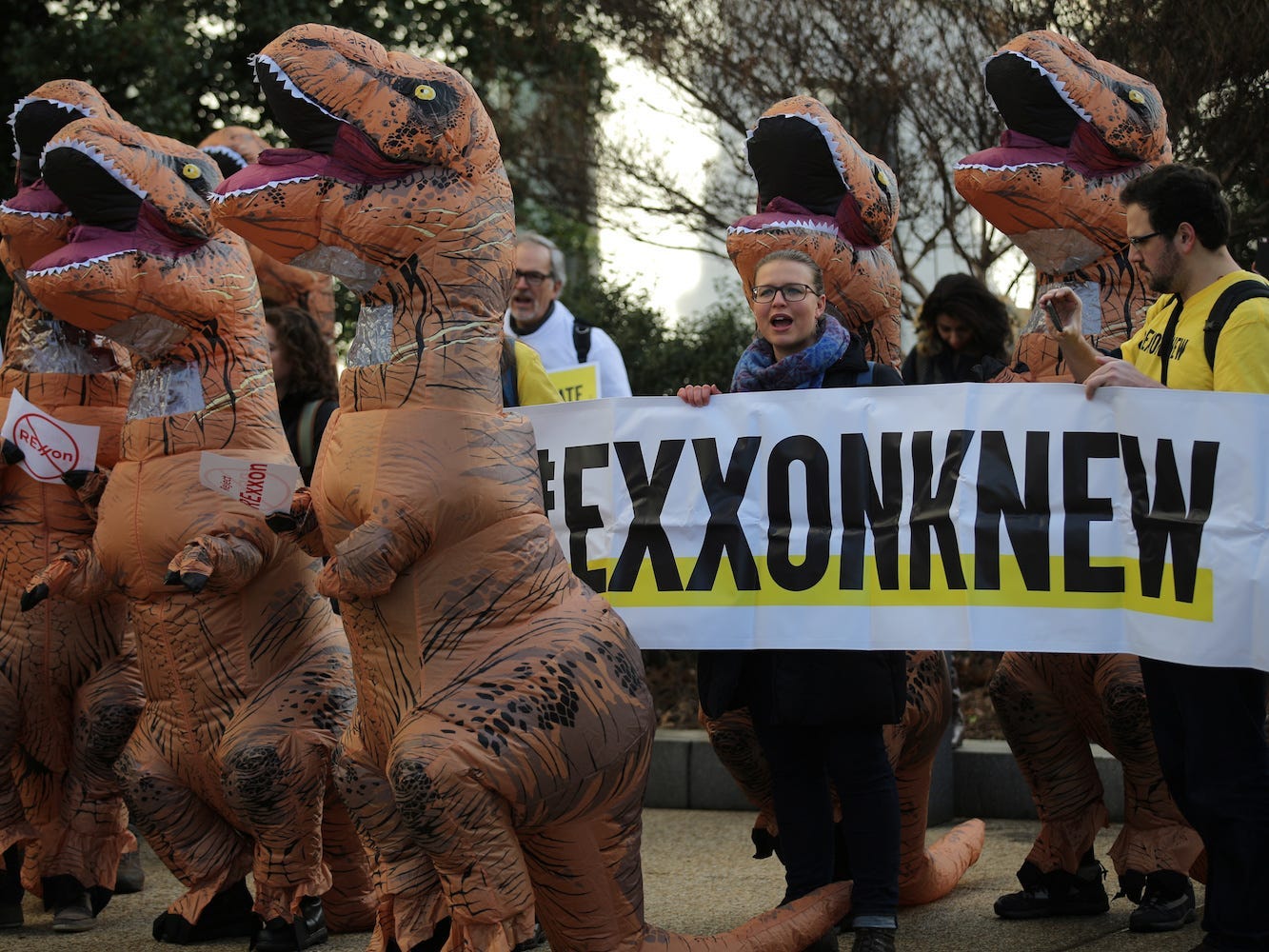 Despite having accurate predictions about global warming, the oil giant denied it would happen.

An investigation by InsideClimate News previously revealed that ExxonMobil’s scientists began warning its executives about the dangers of burning fossil fuels in 1977, when the company was called Exxon.

The company’s products could release so much carbon dioxide into the atmosphere that global temperatures rise 2 to 3 degrees Celsius, those scientists predicted.

“It’s one thing to kind of have the impression that they were vaguely aware of global warming decades ago, but it’s another to see the numbers and realize that they actually knew as much as anybody,” Geoffrey Supran, a Harvard historian of science who led the analysis, told Insider. “Arguably, they knew all they needed to know.”

“This study makes it more unassailable that Exxon knew the truth internally and lied publicly,” Matt Pawa, an environmental attorney who has previously won a case against ExxonMobil over groundwater pollution, told Insider.

He added that the new research could make a big difference for lawsuits against the company “because they’re being sued for knowing the truth, lying about it, and causing massive harm.”

The analysis is relevant to a bevy of ongoing legal cases against the oil giant.

Minnesota, Massachusetts, Connecticut, the District of Columbia, and the City of Hoboken have all sued ExxonMobil, alleging the company deceived the public about fossil fuels being a major cause of climate change and violating consumer protection laws.

Other cases accuse ExxonMobil of failing to disclose to investors that future oil and gas resources might not be assets at all, since they might have to be left in the ground in order to stay within the planet’s carbon budget. Those “stranded assets” are now a real possibility, due to global climate goals outlined in the Paris Agreement. 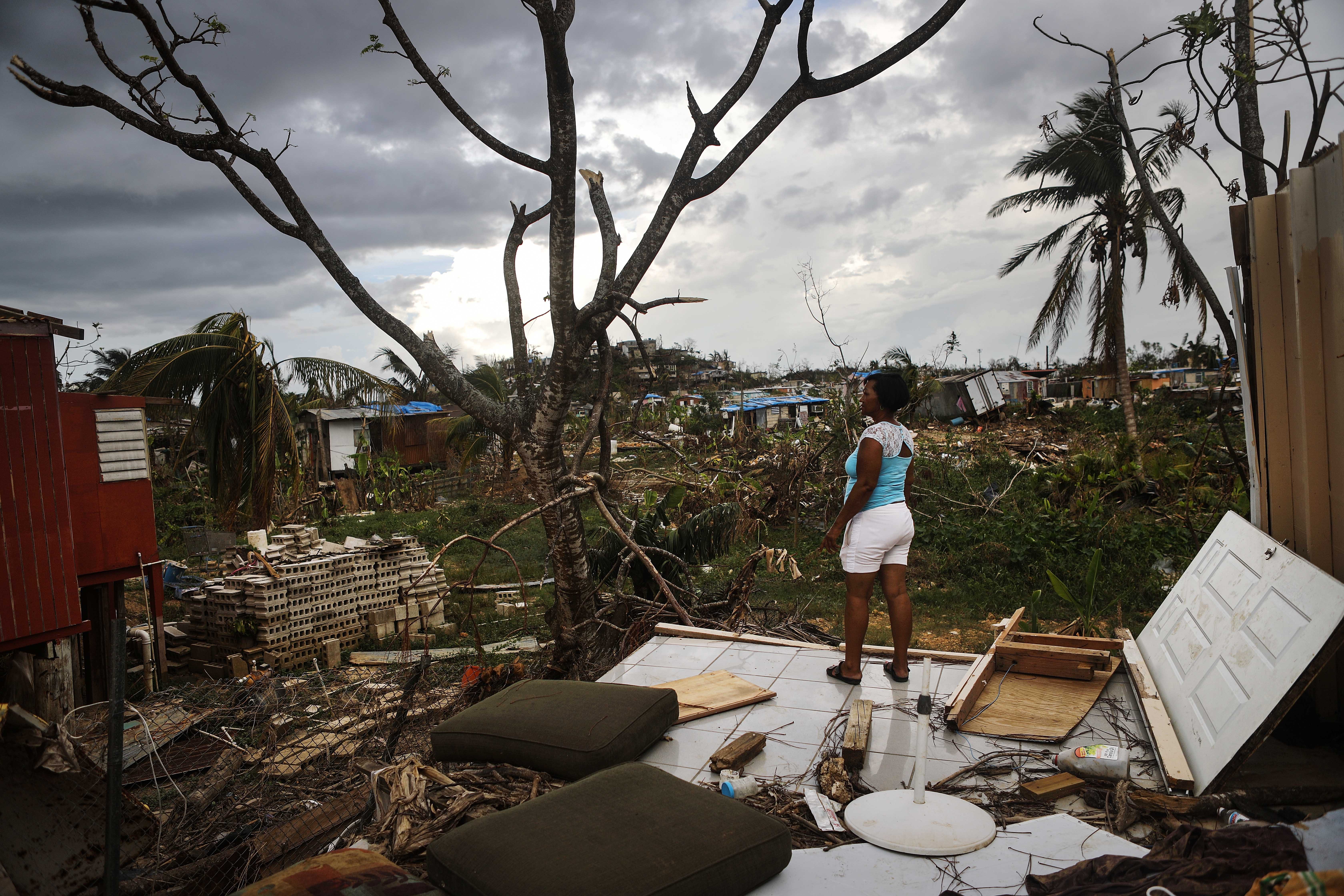 A woman standing where her home was before Hurricane Maria in Puerto Rico.

The new analysis is also relevant to a class-action lawsuit recently filed by 16 Puerto Rican municipalities under the RICO statute normally used to prosecute organized crime. That case alleged that ExxonMobil — and other oil companies — engaged in a coordinated, multibillion-dollar scheme in order to convince consumers that fossil fuels do not alter the climate in order to bolster their bottom line.

But the outcome of most of those lawsuits largely depends on whether defendants like ExxonMobil are able to get their state-level cases into federal court, where judges may be more friendly to fossil-fuel companies than state juries would be. The RICO case is an exception, since it’s already filed in federal court.

Sokol said the merits of the cases against ExxonMobil are strong and probably warrant punitive damages under the law. But that doesn’t necessarily mean that fossil fuel companies will ever have to pay up.

“My fear is that they’ll completely evade the merits and there won’t even be a day in court,” she said.

More Memphis police officers are facing disciplinary charges in connection to the death of Tyre Nichols – we have details. We’ll also tell you about a House investigation into Republican Congressman George Santos and hear from one of his constituents. Plus, we have new developments in the aftermath of a deadly earthquake in Turkey and Syria. Labor Secretary Marty Walsh is expected to leave the Biden administration. And, Federal Chair Jerome Powell shares his outlook on the economy in the fight to cool inflation.

Home » Audio Sources - Full Text Articles » ExxonMobil’s secret projections of the climate crisis were astonishingly accurate, and a legal expert says that’s ‘a stick of dynamite’ for the oil giant’s court battles
a