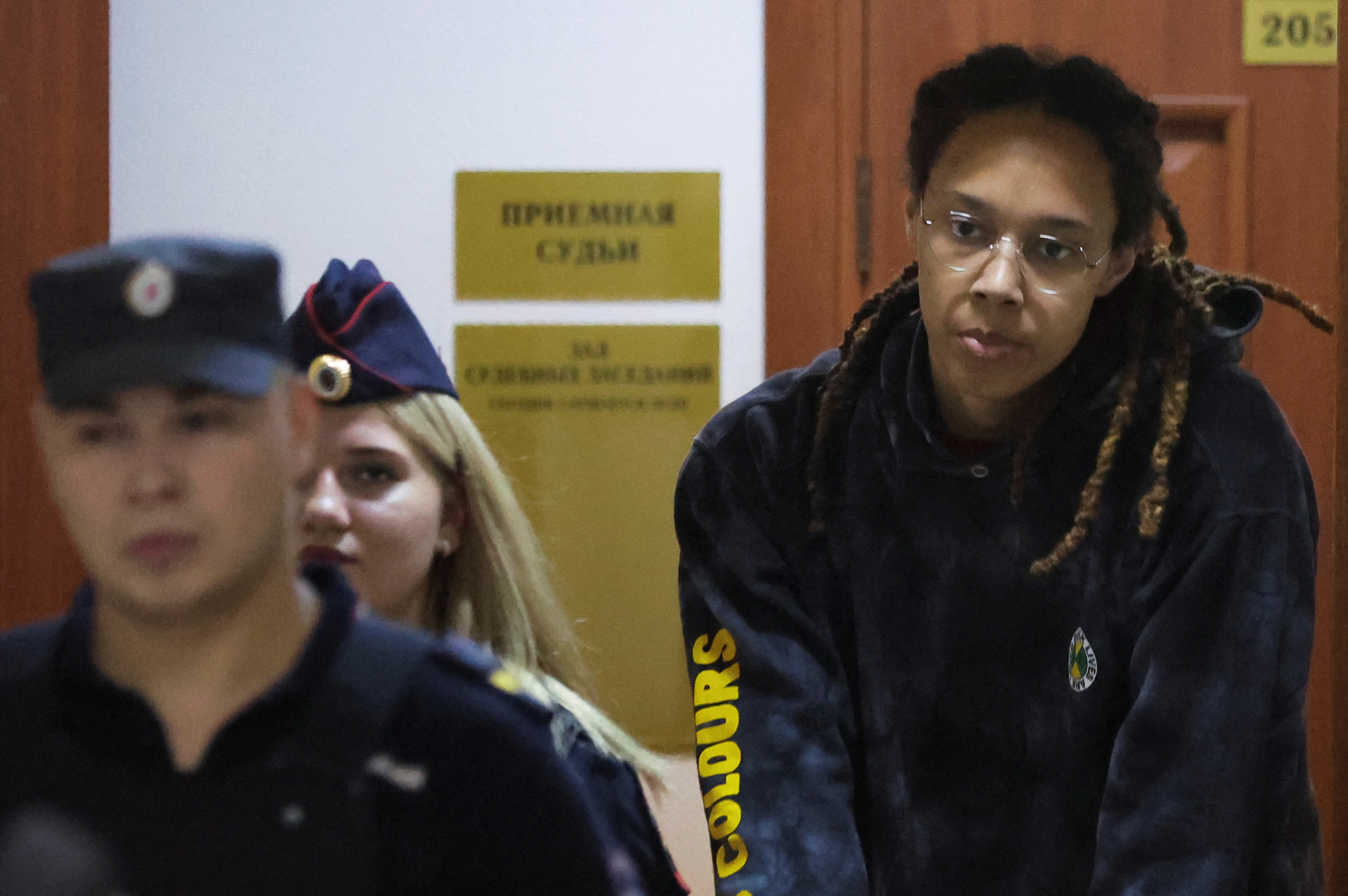 U.S. basketball player Brittney Griner, who was detained at Moscow’s Sheremetyevo airport and later charged with illegal possession of cannabis, is escorted before a court hearing in Khimki outside Moscow, Russia July 26, 2022. REUTERS/Evgenia Novozhenina/Pool

A U.S. official said on Thursday that U.S. basketball star Brittney Griner, who had been jailed in Russia in charges of possessing and smuggling illegal drugs, was now in U.S. custody.

Russia said she had been traded for Viktor Bout, a Russian arms dealer jailed in the United States.

Here are some facts about Griner:

Known as “BG” to basketball fans, she has played for UMMC Ekaterinburg in Russia during the WNBA winter off-season since 2014. The club has drawn other top U.S. basketball players including Sue Bird, Diana Taurasi and Candace Parker.

At the time of her arrest, she was on her way to Ekaterinburg, 1,400 km (870 miles) east of Moscow, to rejoin her club for the playoffs after spending time at home in the United States.

Griner was detained at Moscow’s Sheremetyevo airport on Feb. 17 with vape cartridges containing cannabis oil in her luggage, exactly a week before Russia took relations with the West to their lowest level in decades by invading Ukraine.

The player had a prescription in the United States for medical marijuana to relieve the pain from chronic injuries.

The drug has fewer side effects than some painkillers and is a common treatment for athletes in places where it is legal. In Russia, however, marijuana is illegal for both medicinal and recreational purposes.

Griner pleaded guilty to the charges of possessing and smuggling illegal drugs but insisted she had made an “honest mistake” and had not intended to break Russian law.

She testified that she did not understand how the cartridges had ended up in her luggage and speculated that she could have packed them inadvertently as she rushed to make her flight.

“I had no intent, I did not conspire or plan to commit this crime,” she told the court. “I know everybody keeps talking about political pawn and politics, but I hope that is far from this courtroom.”

At her unsuccessful appeal, she said the amount of marijuana in her luggage had been only slightly above that considered legally insignificant.

Her lawyers said that, in any event, the sentence of nine years in a penal colony was grossly disproportionate.

The failure of Griner’s appeal on Oct. 25 paved the way for her to be moved from a detention centre near Moscow to a penal colony elsewhere in Russia.

Her lawyers said on Nov. 17 that she had been taken to Female Penal Colony IK-2 in Yavas, a town in the Mordovia region southeast of Moscow.

U.S. officials and prominent athletes say Griner has been wrongly detained and convicted and have called for her immediate release, saying she is being used as a political pawn.

U.S. President Joe Biden met with Griner’s wife Cherelle in September to tell her he was working to secure Griner’s release as soon as possible.

Griner’s initials and jersey number, “42”, have been stencilled onto the courts of all 12 WNBA teams this season.

Alongside many messages of support from across U.S. sport, Megan Rapinoe of the women’s U.S. national soccer team wore a white suit jacket with “BG” embroidered on her lapel as she received the Presidential Medal of Freedom from Biden.