After winning a slim majority of seats in the U.S. House of Representatives in November’s midterm elections, Republicans are trying to elect a speaker.

The speaker of the House, second in the line of succession for the presidency after the vice president, leads the chamber and sets the legislative agenda and political tone.

Normally, the job goes to a lawmaker belonging to the party that controls the chamber with a majority of members, though it is possible for other people to be elected to the post, including an outsider who is not an elected lawmaker.

The full House of Representatives votes for the speaker on its first day of a new Congress, which was Tuesday.

A candidate must gain a majority of votes cast. With 435 seats in the chamber, the speaker must get 218 votes to win. If no candidate reaches that threshold, the House will continue voting until someone does. The record for longest vote was set in 1856, when it took 133 ballots and two months to choose a speaker.

Congress does not currently have a speaker. The House returned from its winter recess on Tuesday to elect a speaker and swear in newly elected representatives, but no one nominated received enough votes to win, despite three rounds of voting. It was the first time since 1923 that the speaker hasn’t been elected on the first ballot.

No other business – including swearing in new lawmakers and setting out the rules for House procedures – can take place until the speaker is chosen.

House Republican Leader Kevin McCarthy has long sought the job and was expected to finally achieve his goal on Tuesday, after dropping out of the race in 2015 due to opposition from hard-line conservative members.

But Tuesday turned into a recurring nightmare for McCarthy, as 20 far-right Republicans refused to support him in three back-to-back votes. He could afford only four “no” votes against his candidacy, given Republicans’ narrow margin of control and all Democrats voting against him.

McCarthy and his allies are struggling to convince the hard liners to back him under any circumstances. He has already made major concessions to their demands, including lowering the threshold on the motion to vacate the chair, a procedural tool that would allow any member to trigger a vote of confidence in the speaker at any time.

However it’s not clear there is anything McCarthy could do to win over some of his detractors, given that they are not convinced he is committed to advancing their legislative goals.

Republican Whip Steve Scalise, the No. 2 House Republican and a supporter of McCarthy, is a potential alternative whom moderates would vote for should McCarthy drop out. However some Republicans said on Tuesday that it did not make sense to drop McCarthy only to back someone ideologically and politically similar to him.

Representative Jim Jordan, a diehard conservative, got the support of all 20 anti-McCarthy Republicans on Tuesday, but vulnerable moderate members of his party would be unlikely to vote for him. Jordan himself nominated McCarthy on one of the ballots and repeatedly voted for him.

On Wednesday, those 20 conservative Republicans coalesced behind Representative Byron Donalds, one of the few Black members of the Republican conference and part of the right-wing bloc. Donalds is about to serve his second two-year term in Congress.

Democrats, meanwhile, have remained united behind their leader, Hakeem Jeffries, who unanimously won leadership of the House Democratic caucus in November. 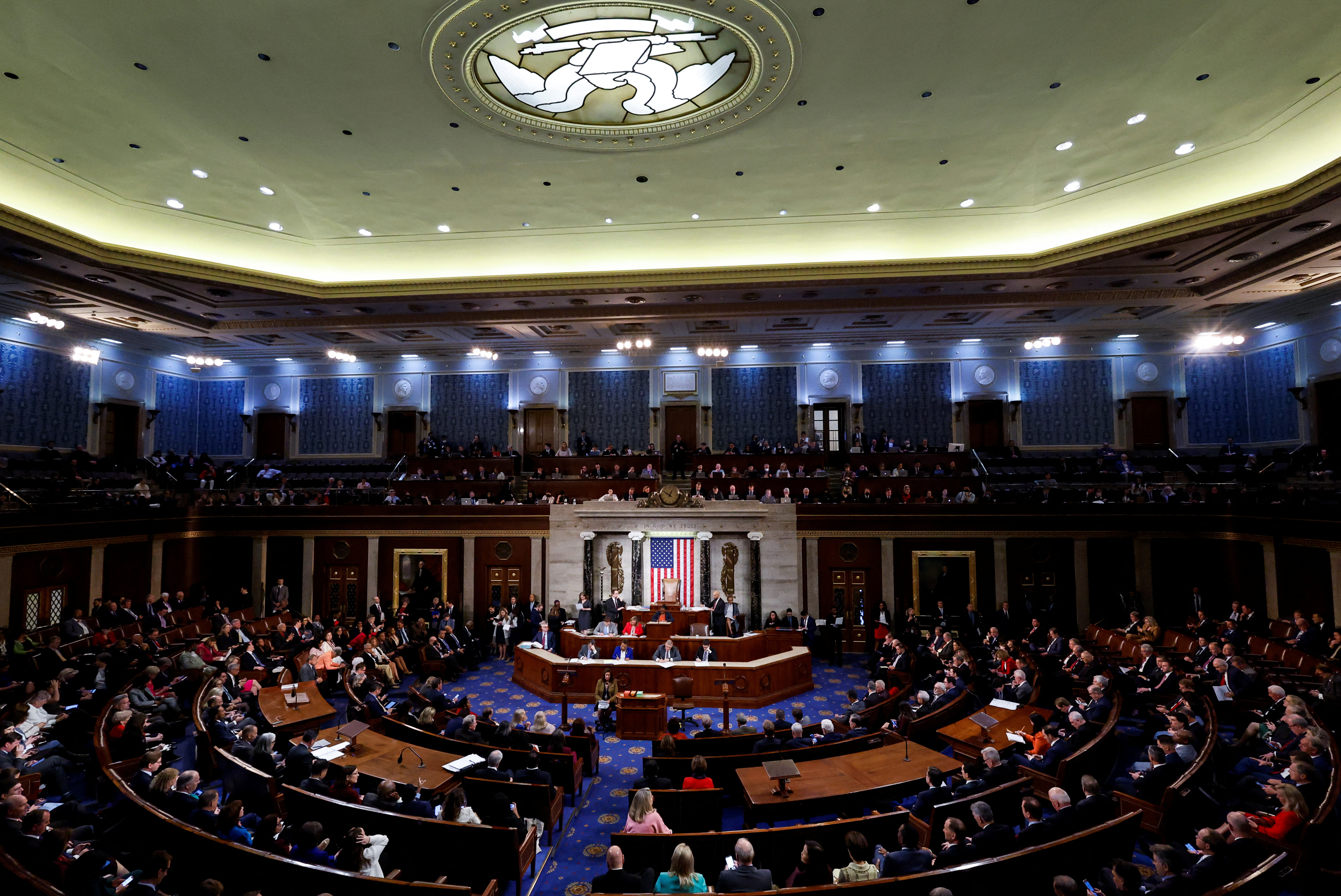 Members of the U.S. House of Representatives gather for a fourth round of voting for a new House Speaker on the second day of the 118th Congress at the U.S. Capitol in Washington, U.S., January 4, 2023. REUTERS/Jonathan Ernst 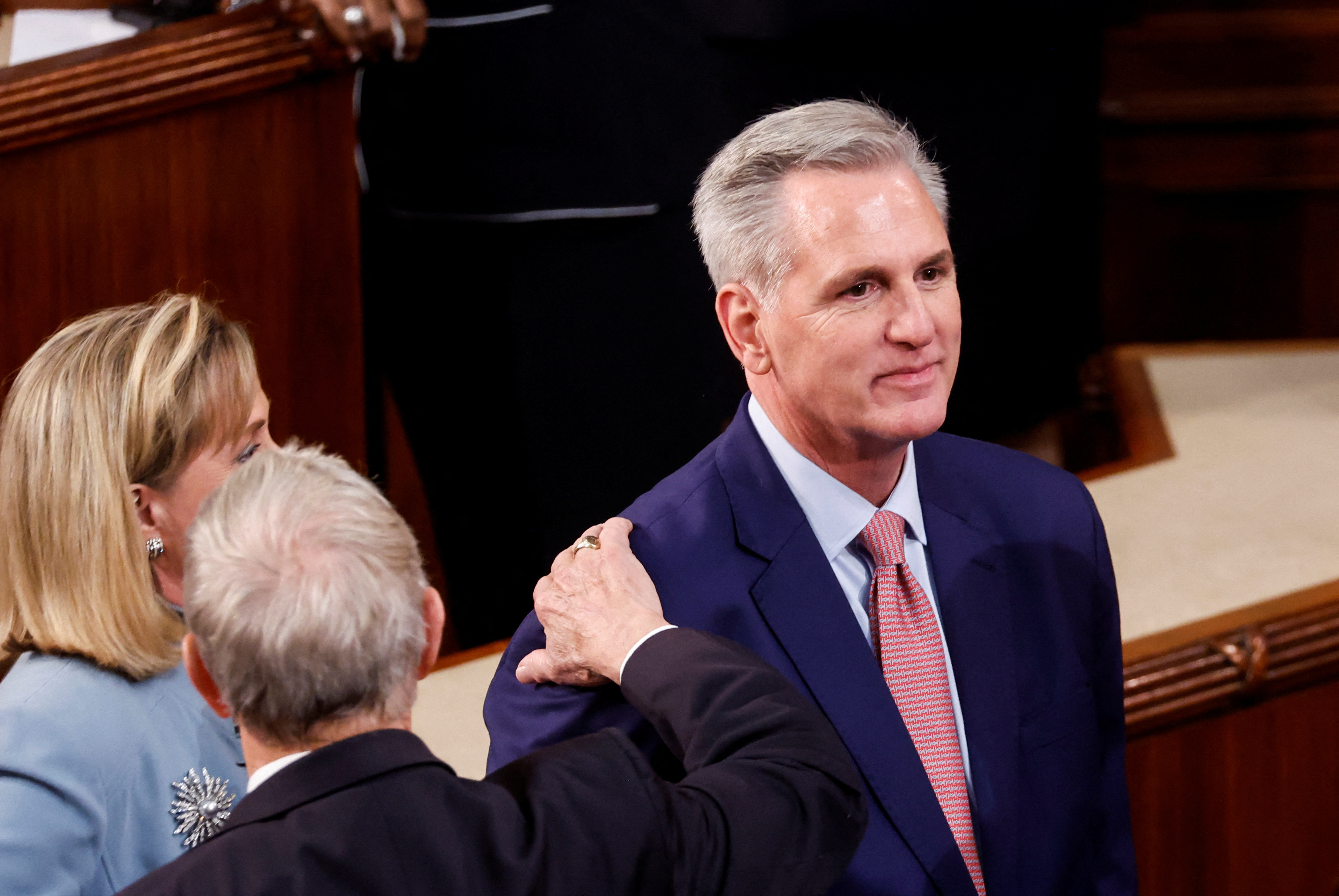 U.S. House Republican Leader Kevin McCarthy (R-CA) gets a pat on the back from one of his House colleagues prior to a fourth round of voting for a new House Speaker on the second day of the 118th Congress at the U.S. Capitol in Washington, U.S., January 4, 2023. REUTERS/Jonathan Ernst

Home » Audio Sources - Full Text Articles » Factbox: How does the U.S. House of Representatives decide on a speaker?
a