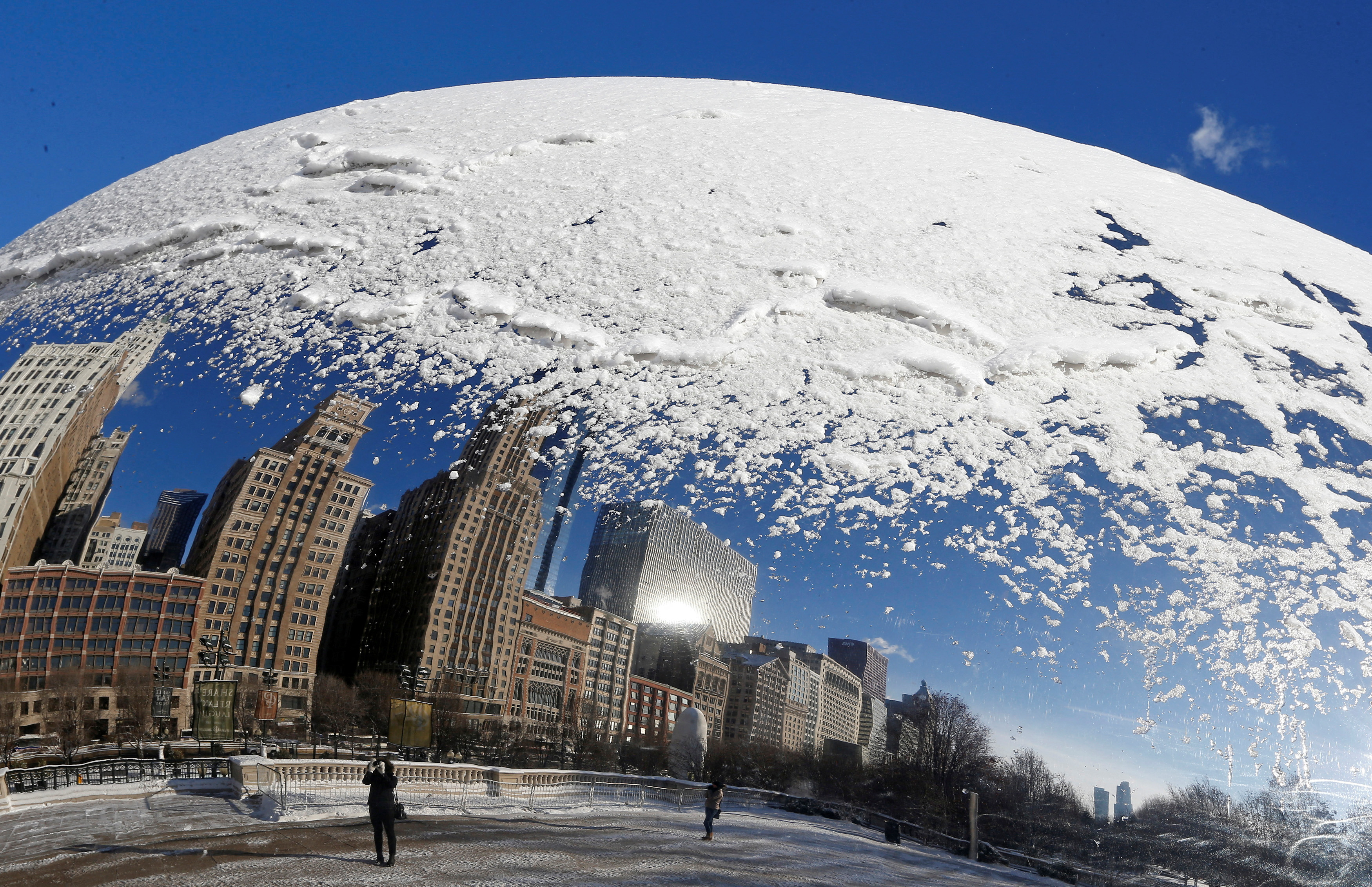 A woman and the Chicago skyline are reflected in the snow covered, curved surface of the “Cloud Gate” sculpture in Chicago, Illinois, January 6, 2015. A REUTERS/Jim Young/File Photo

The first major U.S. winter storm system of the year dumped a frosty mix of snow, freezing rain and sleet from the Northern Plains to the Upper Great Lakes region on Tuesday while posing a tornado and flood threat to a large swath of the South.

The National Weather Service (NWS) forecast 1 to 3 inches of snow (2-1/2 to 7-1/2 cm) would fall an hour, accompanied at times by thunder, and more than a foot would accumulate in parts of Nebraska, South Dakota and Minnesota on Tuesday.

Drifting and blowing snow from strong, gusty winds was expected to make road travel virtually impossible in some areas, while snow fog, mist and freezing rain created treacherous driving conditions in others, the NWS said.

Winter storm warnings, ice storm warnings and winter weather advisories were posted in and around Minneapolis and St. Paul in Minnesota as freezing rain swept north through the region, followed by bands of heavy snow, according to the NWS.

The wintry blast, expected to spread into New England by Wednesday, was part of a larger weather front bringing heavy showers and a chance of severe thunderstorms, hail and tornadoes to the lower Mississippi Valley, Gulf Coast, Tennessee Valley and southern Appalachians.

Tornado watches and severe thunderstorm warnings were in effect across much of Louisiana, Mississippi, Alabama and Georgia, along with flood watches posted along the southern fringe of that zone.

“It’s all part of the same system. The heavy snowfall is occurring on the west to northern side of the storm … and then the rainfall and severe weather is across the south,” NWS meteorologist Allison Santorelli said.

Nearly 200 flights through Minneapolis-St.Paul International Airport were canceled on Tuesday, according to flight tracker FlightAware.

On the West Coast, northern California braced for another bout of heavy rain and flooding from an “atmospheric river” of dense moisture. It was expected to bring drenching rains and the possibility of renewed flooding to northern and central California, starting on Wednesday.

Heavy snow was expected to return to the Sierra Nevada mountains on Wednesday, along with coastal rain and higher-elevation snow in the Pacific Northwest.

As many as 21,000-plus homes and businesses in northern California were without electricity by early on Tuesday, data from poweroutage.us showed.