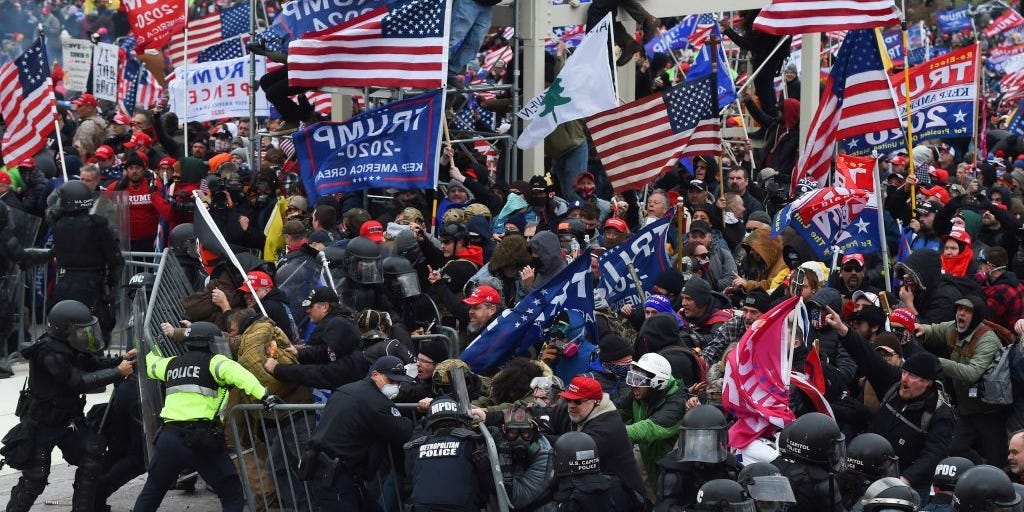 Trump supporters clash with police and security forces as they push barricades to storm the US Capitol in Washington D.C on January 6, 2021.

It’s been two years since a mass of Trump supporters violently infiltrated the US Capitol on January 6, 2021, in an attempt to prevent Joe Biden from being duly certified as the winner of the presidential election.

2022 proved to be a banner year for learning the ins and outs of the disastrous event, which left both protestors and police injured, and some even dead.

This was due to the ten hearings set up by the United States House Select Committee on the January 6 Attack, a nine-member group consisting of seven Democrats and two Republicans, former Reps. Liz Cheney and Adam Kinzinger.

After interviewing more than 1,000 witnesses, the committee used the hearings to publicly unveil key information about the planning behind the January 6 attack, a plot to overturn the presidential election results, and recommended charges against President Donald Trump.

Revelations from cases from the Justice Department, which has arrested 978 Capitol rioters and seen 465 of them plead guilty, have also given insight into the events that occurred on January 6.

Here are five things we learned in 2022 about the insurrection:

In a speech given near the White House on January 6, Trump said he’d join protestors and march with them to the Capitol, though his march never occurred.

Former White House Aide Cassidy Hutchinson testified that while in a vehicle, Trump demanded to his team that he be brought to the Capitol alongside his supporters on January 6. When his security team didn’t allow him to do so, Hutchinson noted, the president lunged at a member of the Secret Service and tried to grab the steering wheel.

Tony Ornato, a former White House aide, also mentioned in his deposition with the committee that other aides floated the idea of setting up a glass box atop a stage for Trump to “peacefully protest” alongside the crowd.

2. The plot to declare victory before votes were counted was hatched as early as 4 months before Election Day 2020

Former Trump campaign manager Brad Parscale told the committee, which was later unveiled at a hearing, that the president had begun planning in July to say he won the election even in the event he lost.

“As far as I’m concerned, we already have won this,” Trump said on November 4, 2021, before several swing states had been called.

“If Trump is losing by 10 or 11 at night, it’s going to be even crazier … He’s going to sit right there and say, ‘They stole it.  I’m directing the attorney general to shut down all ballot places in all 50 states,'” Bannon said on October 31, 2020.”If Biden is winning,” he noted, “Trump is going to do some crazy shit.”

3. Trump never called any members of the military for help on January 6

Chairman of the Joint Chiefs of Staff Mark Milley told the committee that he was puzzled by Trump’s inaction that day.

“Nothing? No call? nothing? Zero?” he told members of the House January 6 committee.

“If you watched our hearings closely, you understand that Vice President Mike Pence was essentially the president for most of that day,” she said. “White House staff knew it, and so did every other Republican and Democratic leader in Washington.”

Cheney reiterated in her speech that Trump absconded his duties and that committee testimonies showed “that President Trump was the only person who refused to respond to desperate calls for help, even from his own congressional allies. He refused to come to their aid.”

4. Trump tried to call a witness of the January 6 committee

Cheney ended the seventh of the hearings with a bombshell: Trump called a witness of the House January 6 investigation. It’s unclear what his intention was, but it prompted House investigators to contact the Justice Department.

“After our last hearing, President Trump tried to call a witness in our investigation — a witness you have not yet seen in these hearings. That person declined to answer or respond to President Trump’s call and, instead, alerted their lawyer to the call,” Cheney said.

Cheney also revealed that Trump allies were calling and pressuring witnesses, urging them to do “the right thing.”

Hutchinson also said that former White House Chief of Staff Mark Meadows asked for a pardon, along with Trump’s attorney Rudy Giuliani. The January 6 committee revealed that John Eastman, a conservative attorney who peddled a plan to overturn the presidential election, asked Giuliani to relay his desire for a pardon as well.

Home » Audio Sources - Full Text Articles » It’s been two years since rioters stormed the Capitol. Here’s 5 things we’ve learned about the insurrection in the past year
a