Listen to this article
2022-12-31T13:11:17Z
Bells rang out across the Vatican on Saturday (December 31), after the death of former Pope Benedict was announced by a spokesman for the Holy See.

Former Pope Benedict, who in 2013 became the first pontiff in 600 years to resign, died on Saturday aged 95 in a secluded monastery in the Vatican where he had lived since stepping down.

Bells tolled across the Vatican City as news of his death, which followed a rapid decline in his health over Christmas, spread to the faithful on an unusually warm winter’s day.

The Vatican said his body would lie in state from Monday in St.Peter’s Basilica and his funeral will be held on the morning of Jan. 5. Pope Francis will preside over the ceremony, which will take place in the huge square in front of the basilica.

“With sorrow I inform you that the Pope Emeritus, Benedict XVI, passed away today at 9:34 in the Mater Ecclesiae Monastery in the Vatican,” Vatican spokesman Matteo Bruni said.

The Vatican has painstakingly elaborate rituals for what happens after a reigning pope dies but no publicly known ones for a former pope – one of the many complications thrown up by Benedict’s shock resignation in 2013.

Earlier this week, Pope Francis disclosed that his predecessor was “very sick”. Bruni said Benedict had received his last rites, called “the anointing of the sick”, on Wednesday.

Leaders were swift in sending their condolences for Benedict, who was the first German pope in 1,000 years.

“We mourn the death of our Bavarian Pope,” said Markus Soeder, premier of Benedict’s home state. German Chancellor Olaf Scholz said on Twitter that the world had lost “a formative figure of the Catholic Church”.

Italian Prime Minister Giorgia Meloni hailed Benedict as “a great man who history will not forget”, while Polish President Andrzej Duda called him “one of the greatest theologians of the 20th and 21st centuries”.

French President Emmanuel Macron said Benedict had “worked with all his soul and intelligence for a more fraternal world”.

For nearly 25 years, as Cardinal Joseph Ratzinger, Benedict was the powerful head of the Vatican’s doctrinal office, then known as the Congregation for the Doctrine of the Faith (CDF).

He was elected pope on April 19, 2005 to succeed the widely popular Pope John Paul II, who reigned for 27 years. Cardinals chose him from among their number seeking continuity and what one called “a safe pair of hands”.

Child abuse scandals hounded most of his papacy but he is credited with jump-starting the process to discipline or defrock predator priests after a more lax attitude under his predecessor.

But Benedict himself acknowledged that he was a weak administrator, saying he showed a “lack of resolve in governing and decision taking” during his eight-year papacy which was marked by missteps and a leaks scandal.

He announced he was resigning in Latin at a routine meeting of cardinals. Many had no idea what he had said and it took time before the news sank in. He himself said he was no longer strong enough to lead the Church due to his “advanced age”.

After his resignation he installed himself in a converted convent on the Vatican grounds and chose the title “pope emeritus”.

Although he rarely appeared in public, Catholic conservatives looked to the former pope as their standard bearer and some ultra-traditionalists even refused to acknowledge Francis as a legitimate pontiff.

They have criticised Francis for his more welcoming approach to members of the LGBTQ+ community and to Catholics who divorced and remarried outside the Church, saying both were undermining traditional values.

Despite the difficulties that emerged from having two men wearing white in the Vatican, Francis developed a warm relationship with Benedict, and said it was like having a grandfather living in the house.

Emeritus Pope Benedict XVI waves as he arrives to attend a mass for the beatification of former pope Paul VI in St. Peter’s square at the Vatican October 19, 2014. REUTERS/Tony Gentile/File Photo 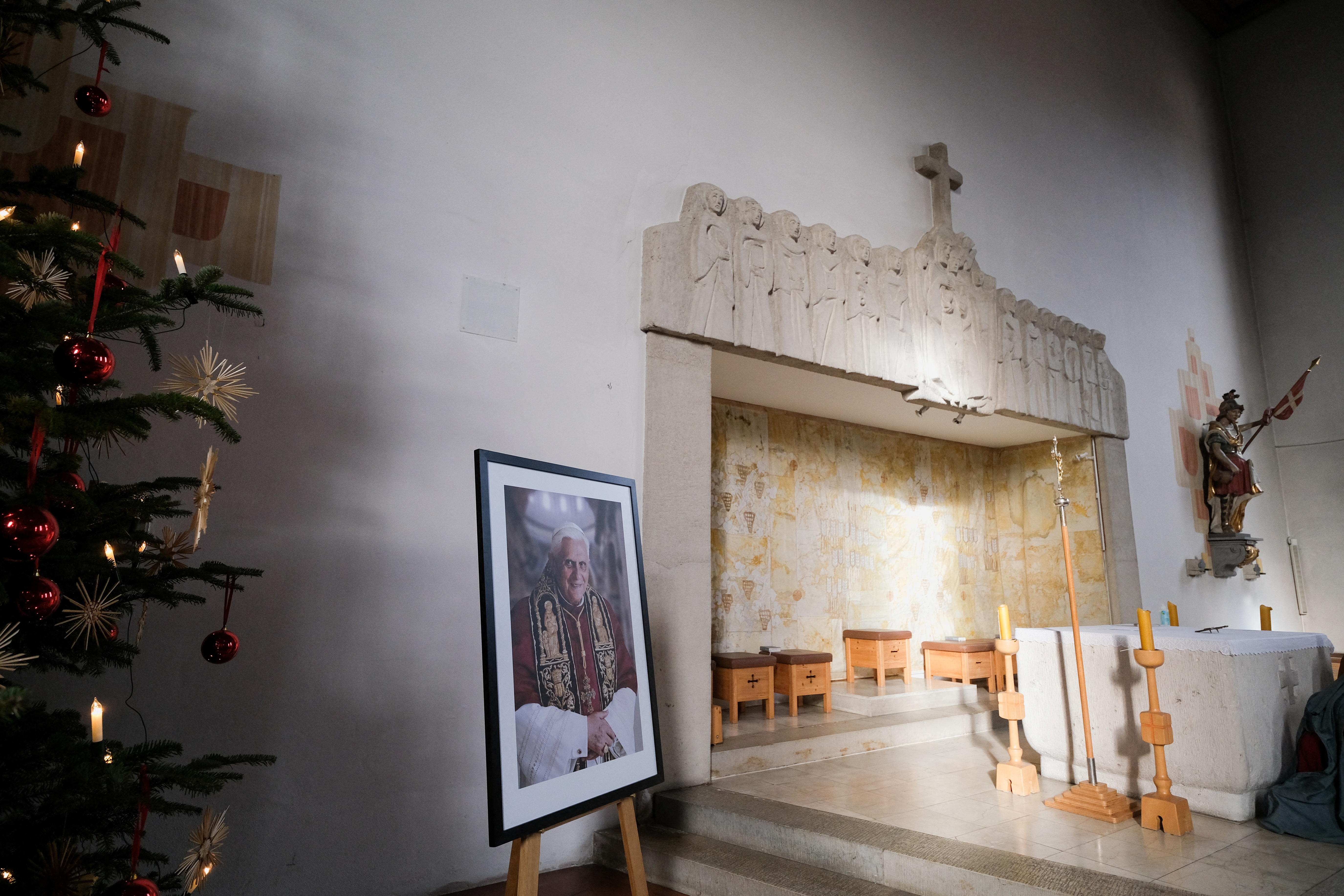 A general view of St. Oswald Church, Baptistery of former Pope Benedict after his death, in Marktl, Germany, December 31, 2022. REUTERS/Leonhard Simon NO RESALES. NO ARCHIVES 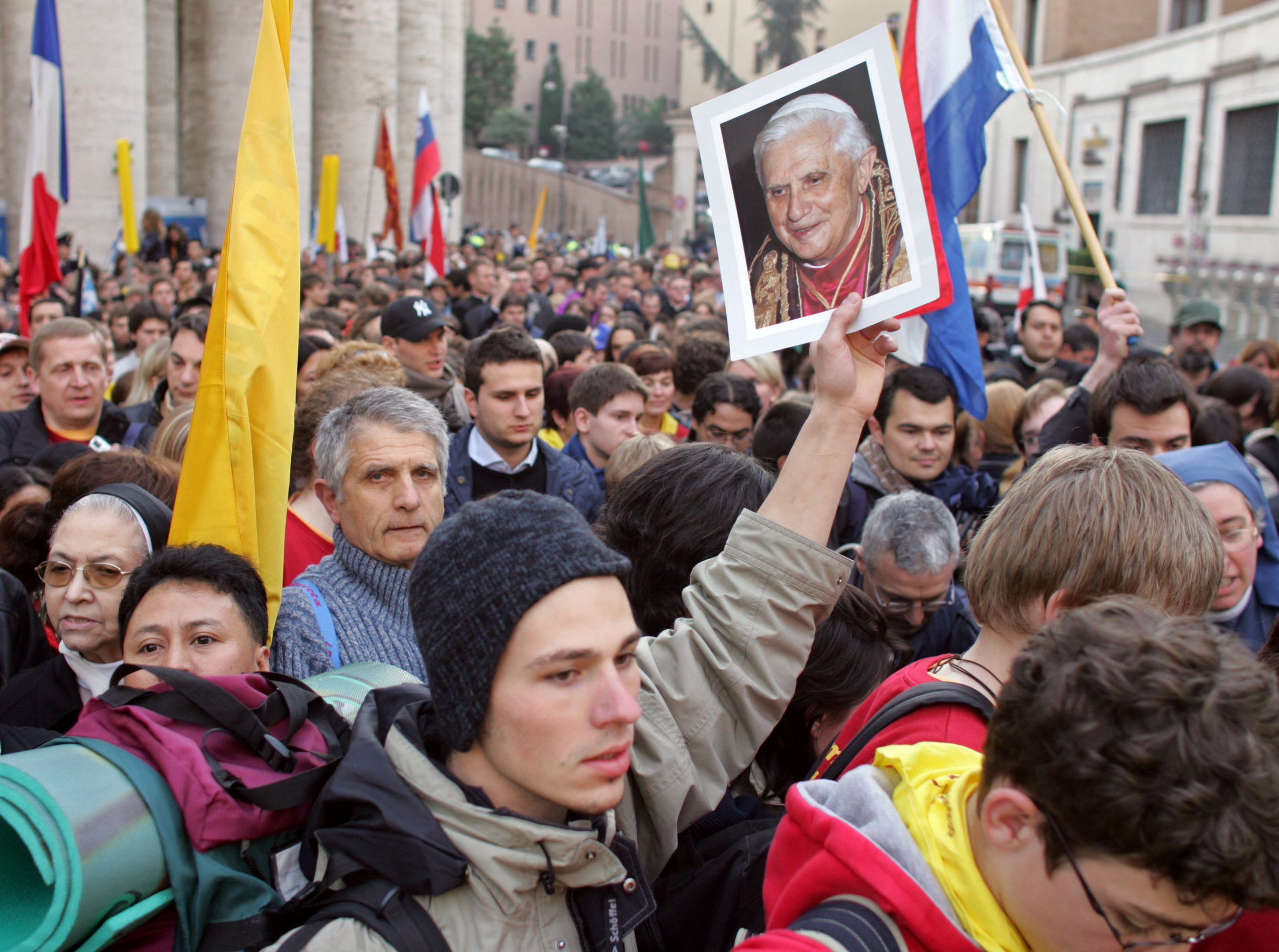 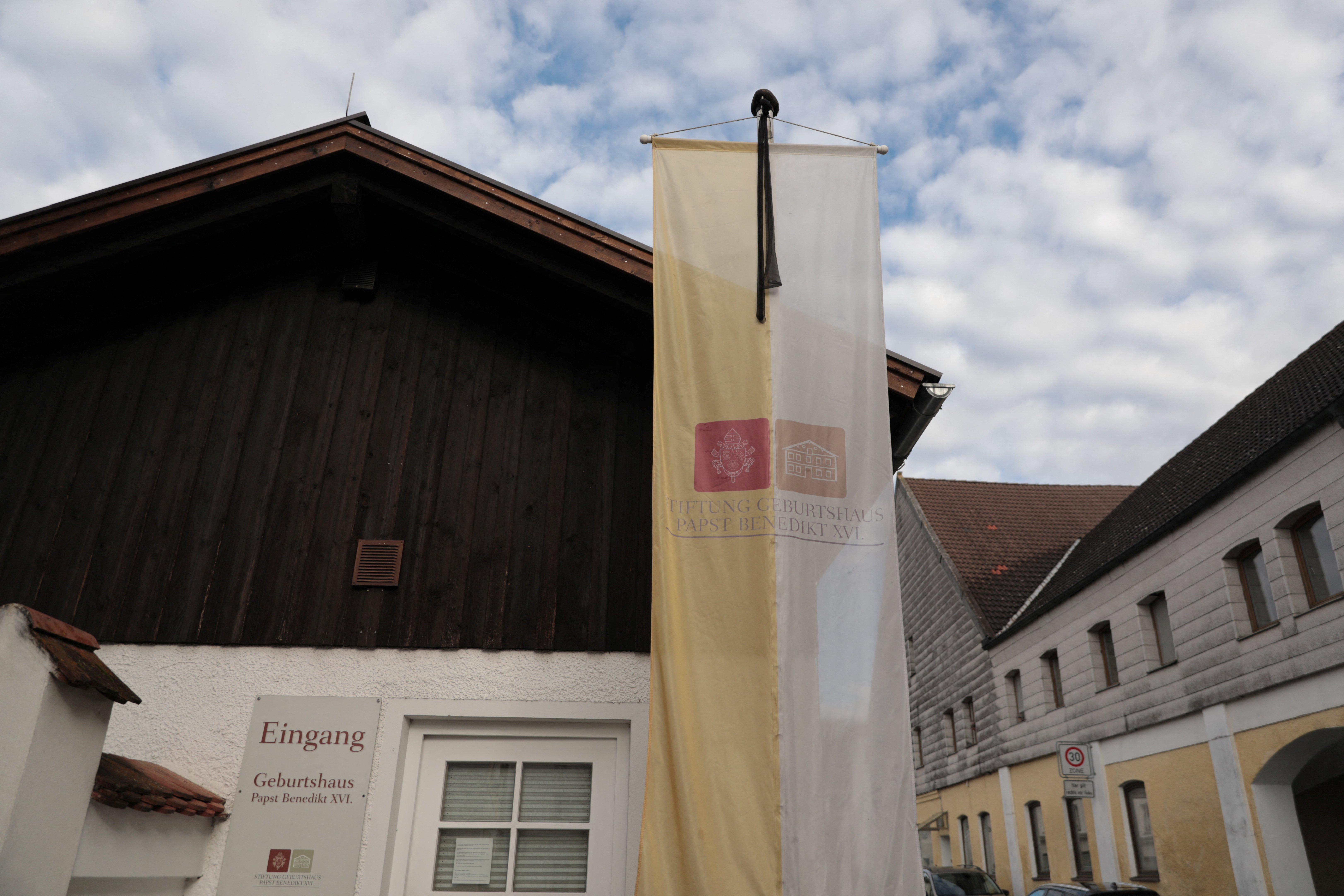 A flag with a black ribbon is seen near the entrance of former Pope Benedict’s house of birth after his death, in Marktl, Germany, December 31, 2022. REUTERS/Leonhard Simon NO RESALES. NO ARCHIVES 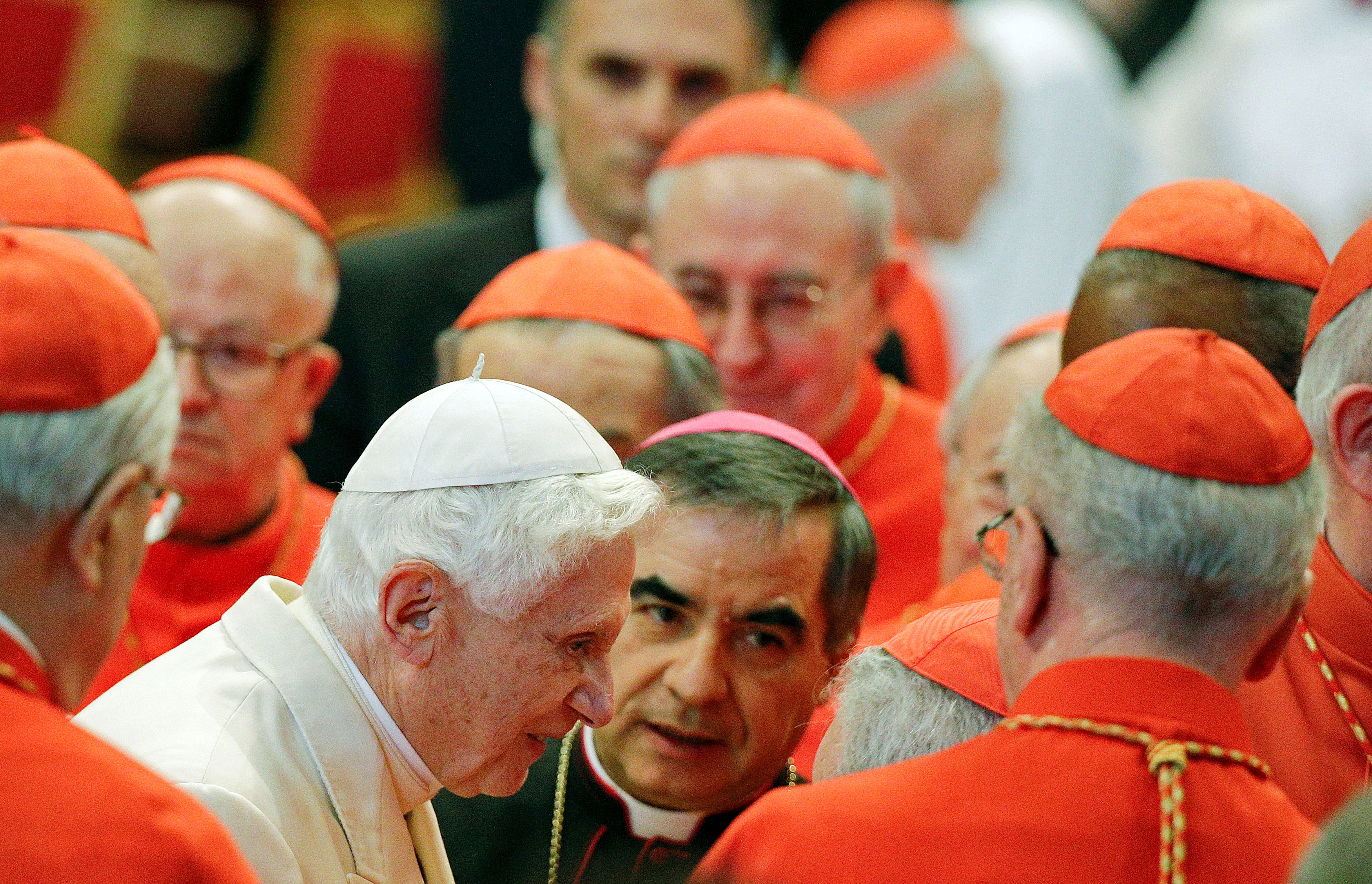 Pope Emeritus Benedict XVI is greeted by Cardinals as he arrives to attend a consistory ceremony in Saint Peter’s Basilica at the Vatican February 22, 2014. REUTERS/Max Rossi/File Photo 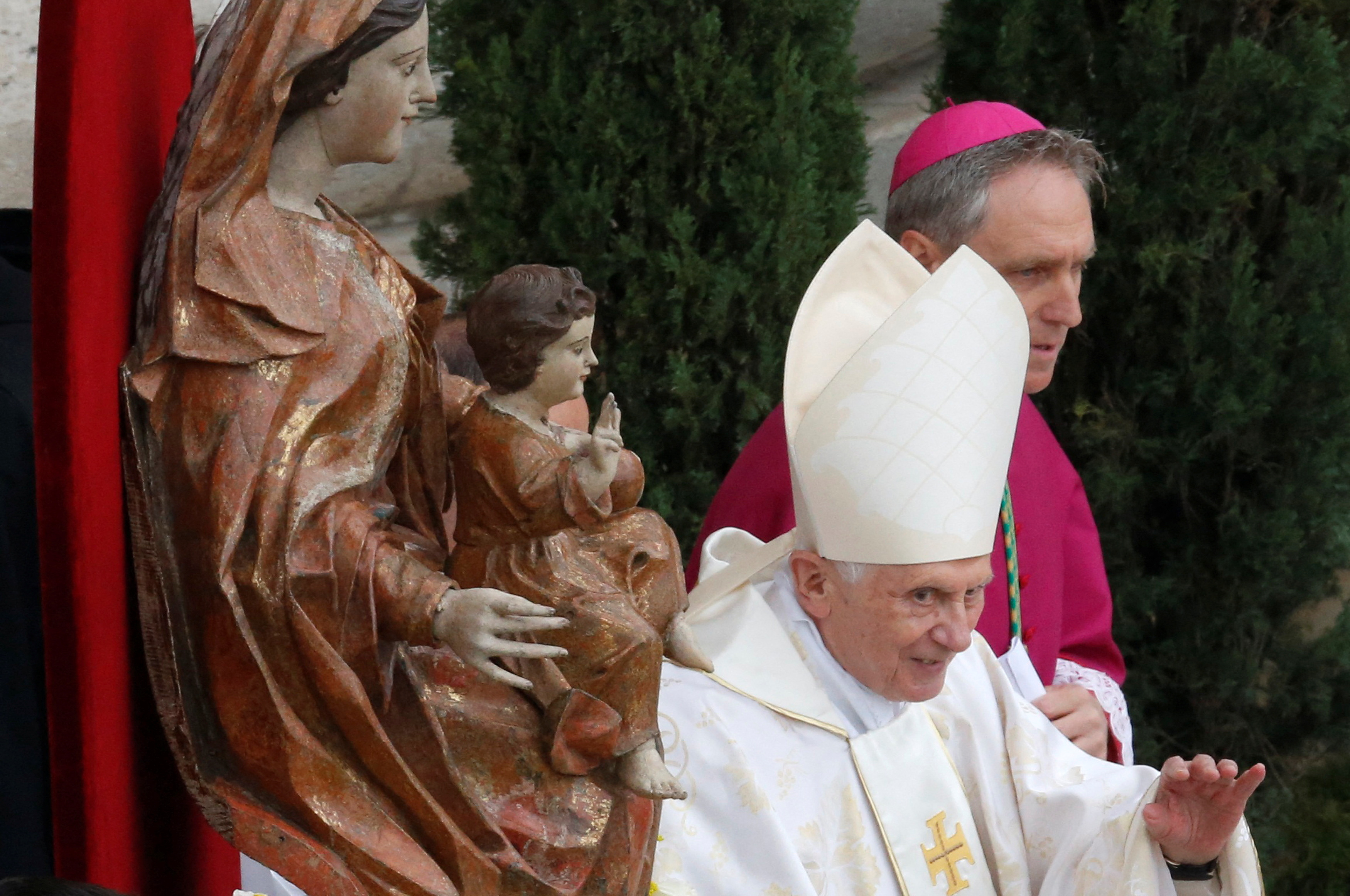 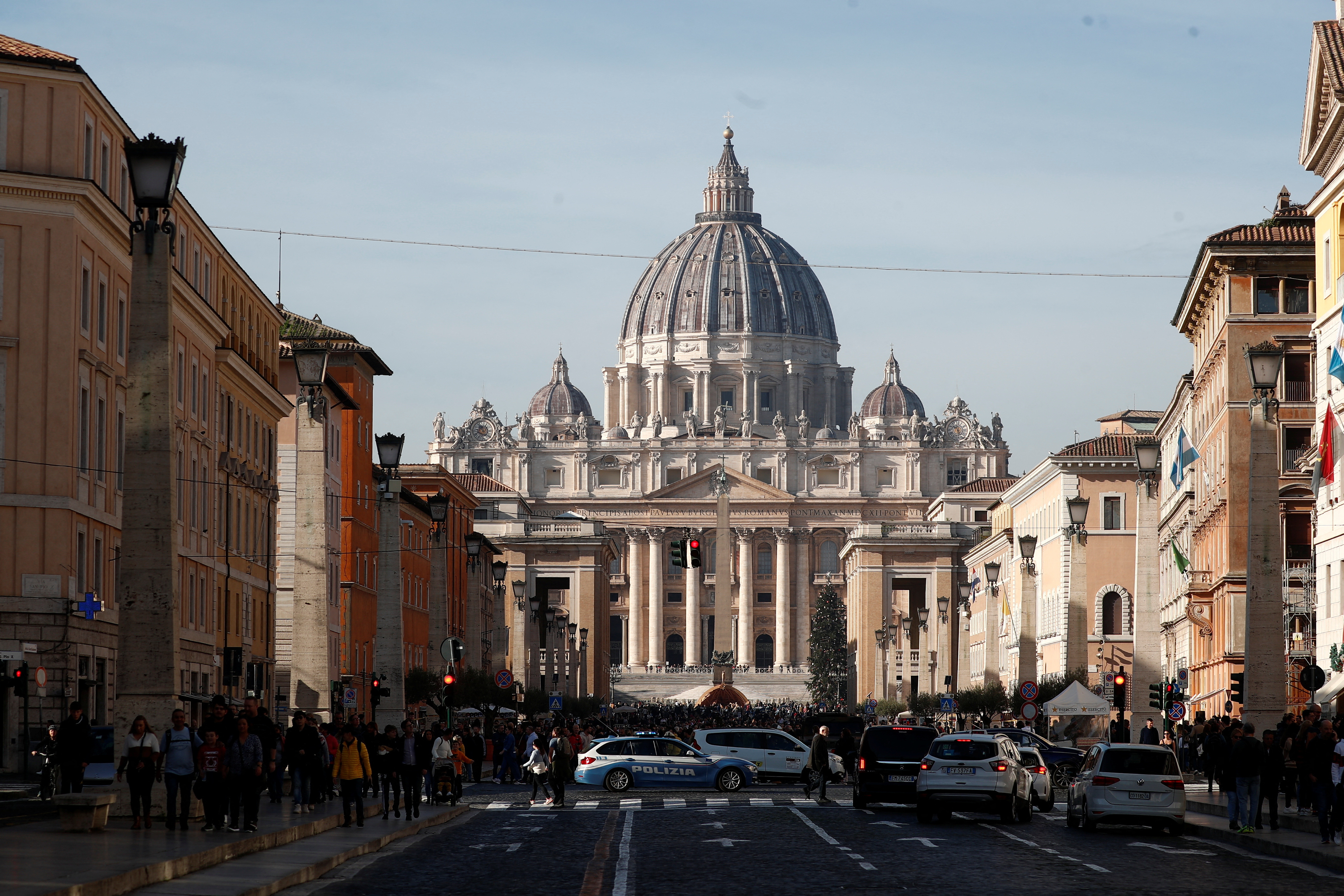