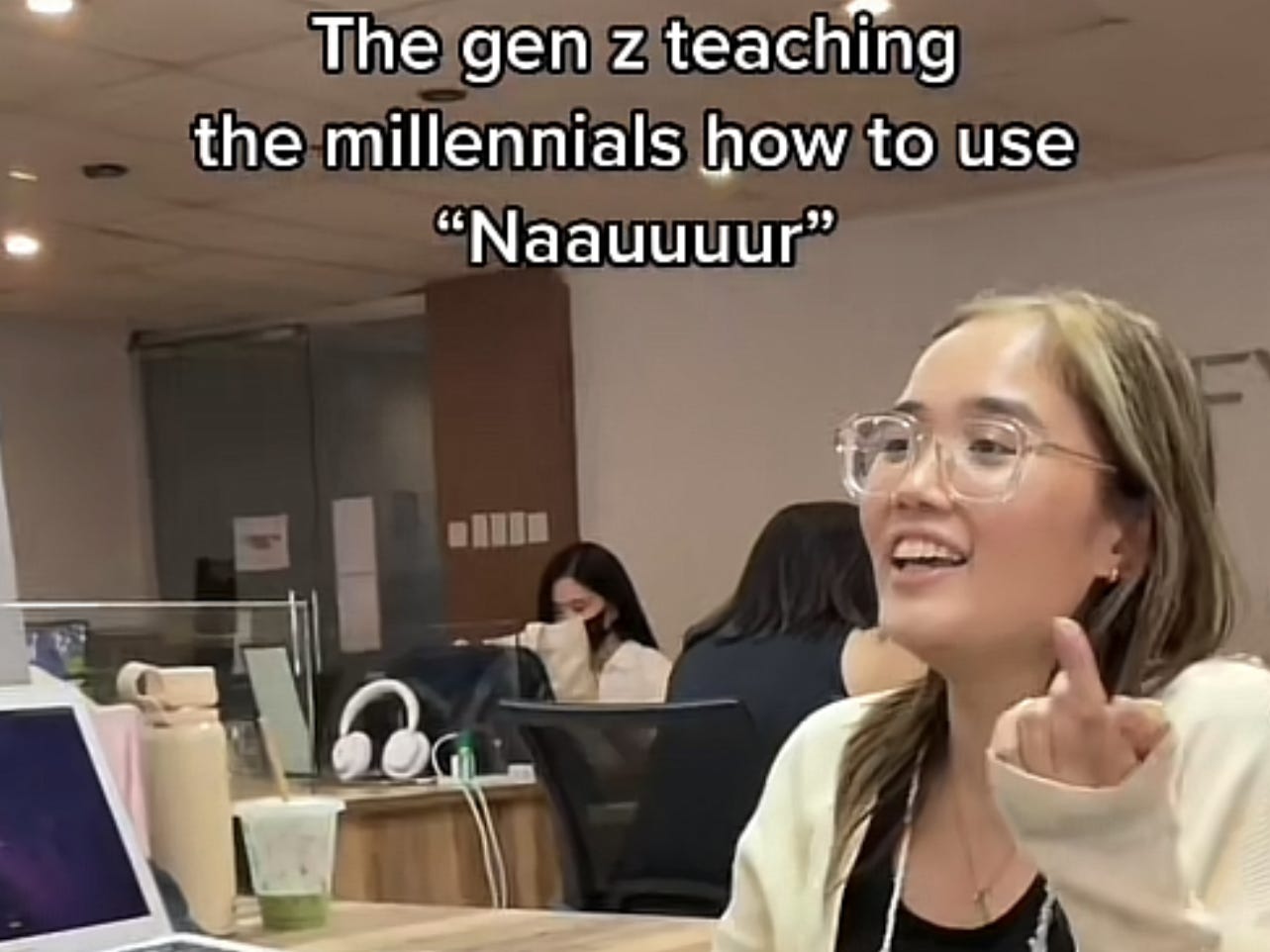 A screenshot from a TikTok by @wethepvblic.

Chronically online Gen Zers are bringing the slang they’ve learned through social media to the office, which could make it tricky for other generations who are trying to work with — and understand — them.

Employees who are part of Generation Z — those born between 1997 and 2012 — are introducing coworkers to a variety of new phrases in the workplace. These days, the jargon circulates through TikTok and is starting to appear in more mainstream office settings, The Washington Post reported.

Zachary Timms, a 25-year-old project engineer, told Insider he’s in a unique position as an elder Gen Zer. Although he’s familiar with the new slang, he said he’s less comfortable than his younger peers are using it.

“I don’t think it’s appropriate to use slang in the office. In a conservative field like engineering, I know that my older coworkers are less likely to get it, so I avoid using slang,” Timms said.

“Older colleagues can benefit from being more adaptable and relatable to their younger coworkers, so they know how to appeal to a younger consumer base,” Martin told Insider. “However, Gen Z must also recognize you can’t come to work and use whatever slang words you’d use with each other because it’s not the same environment.”

While some of these phrases originated from Black and LGBTQ+ creators, they are wide-ranging in their origins and references. Below is a list of phrases a Gen Z colleague might use and what they (usually) mean.

The term “ick” has long been used to describe something gross or unpleasant, but it has taken on a new meaning thanks to a current trend on TikTok. At first, “give me the ick” was used by Gen Zers to refer to traits or habits that turned them off from a person they’re dating, but now many are sharing “icks” in all aspects of life.

In December, a group of Atlanta-based nurses were ridiculed publicly for sharing their “icks” about patients in a TikTok video. The caption read “Icks, Labor & Delivery (Edition),” and the video featured multiple nurses sharing things they didn’t like about patients.

The employees appear to have since lost their jobs, based on an apology posted to Facebook by Emory Healthcare which referred to them as “former employees.”

Stories like the former staffers of Emory Hospital may give young people pause when considering more casual behavior around the office. But Martin told Insider it can work if executed appropriately — and not disparagingly — in an environment of open communication between colleagues of multiple generations.

Simply put, naur just means no or know. It functions as a more dramatic way of saying “no” or “know,” and sounds like “no” with an Australian accent.

To “slay” anything means someone is doing an exceptional job at their work or a task at hand.

If a coworker says this, they mean a task has been completed exactly as it was meant to be done.

A shortened version of “say no more.” It’s used when you completely agree or understand what someone has just said.

This is a more fun way of saying something or someone is ridiculous, or that it can’t be taken seriously.

Home » Audio Sources - Full Text Articles » Gen Z employees are using new slang in the workplace and it’s confusing their colleagues. Here’s a breakdown of the jargon.
a