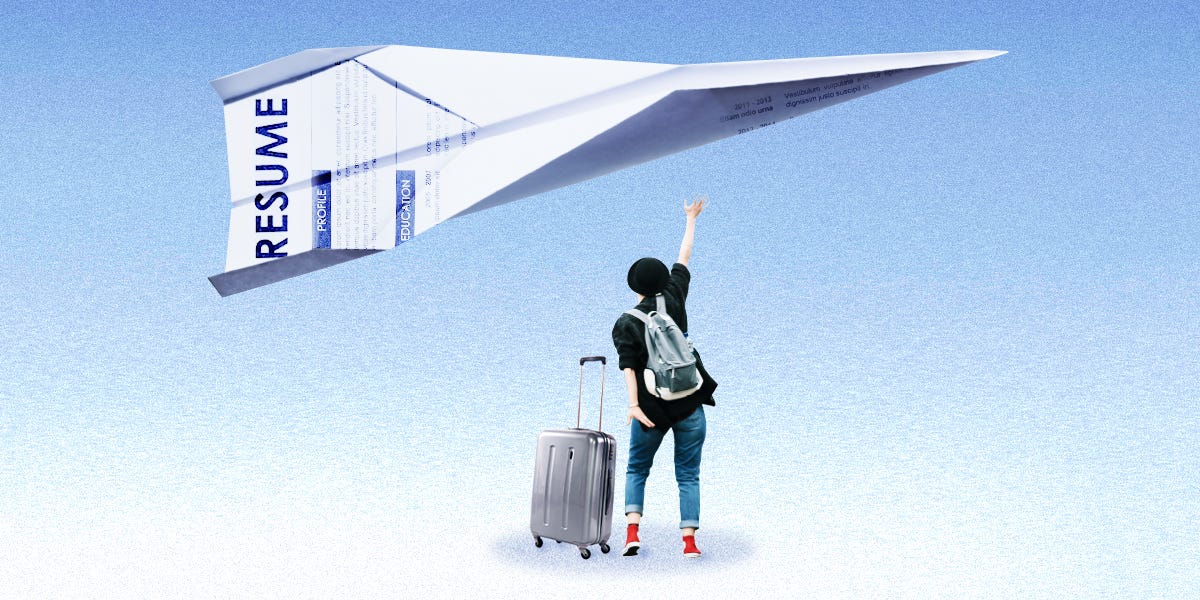 Members of Gen Z are taking more career breaks to travel, take care of their mental health, or explore career paths, and it’s leaving large gaps on their résumés.

Career breaks are supposed to hurt your career. So how is Gen Z getting away with it?

Most people are familiar with the scourge of the résumé gap. For decades, job candidates have been trying to avoid handing over a résumé with an extended gap between jobs. The conventional wisdom has long been that companies won’t want to hire you if your résumé shows that you have a gap of a few months or years between jobs, so candidates often try to fudge the dates or fill in the gaps with extracurriculars. Hiring managers worry the gaps signify that the candidate’s skills have gotten rusty or that they have gaps in their technical know-how, which would mean them taking longer to jump in and get up to speed.

But now, after decades of prospective hires fretting over a blank space on their career arc, Gen Z is shifting the power dynamics. Young entrants to the workforce are leading a new conversation about the workplace, and the long-scorned résumé gap is no exception. A survey from the hiring company Applied found that 47% of UK Gen Zers, the oldest of whom are 25, had taken a career gap of six months or more compared with 33% of workers across the UK as a whole.

Based on my interviews, it’s clear that Gen Z doesn’t think opportunities for personal development should be limited to the more-traditional gap year before or after college, and they don’t think companies should be penalizing workers who have chosen to or been forced to take time away from their career. Instead of viewing it as a negative, many Gen Zers are arguing that career breaks are positive and forcing employers to reconsider their preconceived notions about the résumé gap.

While job candidates have papered over résumé gaps for years, taking a break during the long march of a career is not uncommon. A LinkedIn survey found that 62% of workers had taken a gap at some point in their careers. Research from 2010 found this number had increased fourteenfold since the 1970s. Applied’s survey found that childcare was the most common reason for a career gap: 38% of women and 11% of men said that was the reason for their time away. One in five of all respondents cited mental or physical health as their reason, and just under one-third took a break because of a layoff or to care for a friend or relative.

Despite the varied and often noble reasons people have a hole in their CVs, many companies still penalize people for them. Recent research by ResumeGo, a résumé-consulting service, found that applicants with gaps in their CVs were, on average, 45% less likely to get invited to an interview than those without. More than half of the people Applied surveyed said they would feel more confident applying for jobs if they did not have to share a gap with employers. And these biases can have a significant influence on a person’s long-term life prospects. A 2020 study conducted by researchers at the University of North Carolina at Chapel Hill found that workers with the most employment gaps experienced up to 40% lower wages later in life compared with workers without gaps. The study also found that women, Black men, those with less education, and those living in poverty by age 22 were the most likely to have résumé gaps — and therefore lower wages — throughout their lives.

The bias is acute for young people, who are expected to be putting their noses to the grindstone to make a name for themselves. Brad Thomas, a business manager at the recruitment company Orange Quarter, told me: “If somebody takes time off in their 20s, a lot of employers will still view that time as when they should really be building their career upwards.” He said employers might see that person “as someone who doesn’t take their career very seriously.”

This has led to scores of articles instructing people on how to fudge their résumés to cover up gaps, some suggesting applicants “use a resume style or format that makes the gap less obvious” or “add some limited contractor or consulting work to beef up your resume.” Khyati Sundaram, the CEO of Applied, is leading a campaign that calls on employers to ask for CVs that limit career-gap bias by showing the candidate’s tenure in each role, rather than specific dates. She attributed the bias to “a very narrow view of talent that employers have built over the last 70 years.” She added: “The needs of organizations are changing, society’s changing, and the demands from the younger generations are changing.”

Not ‘just sitting at home in front of the TV’

Shola West, 22, took a yearlong break at the start of her career and now offers advice to other young people via her TikTok account. “I didn’t really know what I wanted to do,” West said. Instead of jumping into a career right out of college that she might not like and wasting time and energy, West chose a career gap that gave her the time she needed to research, network, go to events, and understand what she was getting herself into.

“My break wasn’t just sitting at home in front of the TV — it was me discovering what was right for me,” West told me. “That meant trying different courses, trying different training schemes, doing two-week internships, speaking to people in the industry, speaking to family and friends. I was constantly thinking about what it was I wanted to do and upskilling myself to put myself in the best position so that when I did apply for jobs, I had enough to show and prove my skills.”

Other young people are taking a similar path and exploring career options before jumping into the workforce. Sundaram told me that 70% of young workers in the Applied survey said they believed a three-year break after college before joining the workforce would set them up better, not worse, for a job.

And there are many benefits to these kinds of gaps: In a LinkedIn survey, 69% of people who took a break from their career said their time away helped them gain perspective, and 68% said taking a break positively influenced their well-being. Thomas, the recruitment manager, echoed that sentiment: “Taking time out of work can allow someone to gain practical experience and skills that can end up helping their career in the long run. It may even encourage a pivot to an entirely new industry.”

West told me that a career gap didn’t mean just “a break from a job” — it could mean “the start of building content on TikTok or the start of upskilling yourself in another career.” She told me: “Our generation is not afraid to take risks and do what we need to do. Sometimes it might not make sense to other generations, but we understand where we want to go and are willing to take risks to get there.”

This attitude shift may be starting to catch on. Since the pandemic started, more employers are realizing that long absences from work don’t necessarily mean a candidate is lacking skills or qualifications. In LinkedIn data from 2021, 79% of hiring managers said they would hire a candidate with a gap on their résumé. But as the economy gets weaker, and the job market gets more uncertain, it’s unclear whether this openness to candidates with résumé gaps will be the start of a new paradigm or just a COVID-era blip.

A new attitude toward work

At the core of Gen Z’s willingness to take breaks from their careers is a shift in how they see the nature of work. The distaste for career gaps relies on the assumption, widely espoused by older generations, that we should fit life around work, rather than work around life. This perspective is a vestige of the way the world worked in past decades, but it’s not the reality of the world we live in now, where workers confidently stand up against employers who want to grind them down. “There’s a clear disconnect between what the employers value and the new generation,” Sundaram told me.

When Jack Riley, 22, graduated from college in 2020, he already had a job lined up as a resort-manager trainee in Florida. But the pandemic quickly disrupted those plans and left him stranded with few job options. After two years of dead-end jobs, he quit and decided to travel across Europe for five months.

“I wasn’t a huge fan of my job. I knew I wanted to do sales, but I didn’t like what I was selling,” Riley told me. “I had savings so thought, ‘Why not?’ Everyone talks about traveling young, but most people don’t because they are afraid of the consequences.” Riley is now back from Europe and has had to take a seasonal job at UPS because not many people are hiring for full-time positions this close to Christmas, but he isn’t worried about how the time away from work will affect his career. “If there is a boss that doesn’t get why I did it, I wouldn’t want to work for them anyway,” he said.

Like Riley, other members of Gen Z are coming into the workplace with strong ideas about the role of work in their lives. Surveys have found that Gen Z is more likely than other generations to quit if they are unsatisfied at work, that Gen Z spends less time in a role than millennials, and that 74% of millennial and Gen Z employees report they are “likely to quit within the next year” over a lack of skill-development opportunities. And it often pays off: Young job hoppers who nabbed a new role last year got nearly a 30% raise on average, the Bank of America Institute found.

For Gen Z, the state of the economy and labor market is very different from what their parents and grandparents encountered. “Older generations were thrown straight into the workforce, and few had the opportunity or desire to take time out of work,” Riley said. “They had responsibilities like getting married a lot younger — young people now are getting married a lot later and learning to live their lives before settling down in life and in a career. I don’t think older generations get it because they didn’t have the choice to.” And where older generations had the promise of an easy retirement waiting for them at the end of their careers, a time to sit back and enjoy the fruits of their labor, most young people won’t be able to retire until much later in life, a new study by Evelyn Partners found. For those looking at working well into their 70s, a career gap, or two, simply makes sense.

By 2025, Gen Z workers will make up an estimated 27% of the workforce, and if employers want to tap into this talent pool, they’ll need to pay attention to young workers’ preferences. As Sundaram summed up, “We need to be more objective about what a person brings, rather than simply judging a candidate off a piece of paper.”

Eve Upton-Clark is a features writer covering culture and society.

Home » Audio Sources - Full Text Articles » Having a big ‘résumé gap’ is supposed to hurt your career and tank your future salary. Gen Z is proving otherwise.
a