Germany is bleeding cash to keep the lights on. Almost half a trillion dollars, and counting, since the Ukraine war jolted it into an energy crisis nine months ago.

That’s the cumulative scale of the bailouts and schemes the Berlin government has launched to prop up the country’s energy system since prices rocketed and it lost access to gas from main supplier Russia, according to Reuters calculations.

And it may not be enough.

“How severe this crisis will be and how long it will last greatly depends on how the energy crisis will develop,” said Michael Groemling at the German Economic Institute (IW).

“The national economy as a whole is facing a huge loss of wealth.”

The money set aside stands at up to 440 billion euros ($465 billion), according to the calculations, which provide the first combined tally of all of Germany’s drives aimed at avoiding running out of power and securing new sources of energy.

That equates to about 1.5 billion euros a day since Russia invaded Ukraine on Feb. 24. Or around 12% of national economic output. Or about 5,400 euros for each person in Germany.

Europe’s preeminent economy, long a byword for prudent planning, now finds itself at the mercy of the weather. Energy rationing is a risk in the event of a long cold spell this winter, Germany’s first in half a century without Russian gas.

The country has turned to the pricier spot, or cash, energy market to replace some of the lost Russian supplies, helping drive inflation into double-digits. There’s no security in sight either, with the push to build up of two alternatives to Russian fuel – liquefied natural gas (LNG) and renewables – years away from targeted levels.

“The German economy is now in a very critical phase because the future of energy supply is more uncertain than ever,” said Stefan Kooths, vice president and research director business cycles and growth at the Kiel Institute for the World Economy.

“Where does the German economy stand? If we look at price inflation, it has a high fever.”

Asked about the Reuters tally of money set aside, the German finance ministry referred to data on its website. The economy ministry, which is in charge of energy security, said it continued to work on diversifying supply, adding that LNG and the terminals needed to import it were a critical part of this.

The more costly power will be painful indeed for an economy already forecast to shrink the most among G7 nations next year, according to the International Monetary Fund.

Germany’s energy import bill will grow by a combined 124 billion euros this year and next, up from growth of 7 billion for 2020 and 2021, according to data provided by the Kiel Institute, presenting a major challenge for the country’s energy-intense industries.

The country’s chemicals sector, the most exposed to rising power costs, expects production to fall by 8.5% in 2022, according to industry association VCI, which warns of “huge structural breaks in Germany’s industrial landscape”.

The 440 billion euros earmarked to fight the energy crisis is already near the roughly 480 billion euros that the IW says Germany has spent since 2020 to protect its economy from the impact of the COVID-19 pandemic.

The money includes four relief packages worth 295 billion euros, including the 51.5 billion euro bailout of power firm Uniper (UN01.DE) and a 14 billion rescue package for Sefe, formerly known as Gazprom Germania; up to 100 billion in liquidity for utilities to secure their sales against default; and around 10 billion on infrastructure to import LNG.

Despite these efforts, there is little certainty over how the country can replace Russia; Germany imported around 58 billion cubic metres (bcm) of gas from the country last year, according to data from Eurostat and German industry association BDEW, representing about 17% of its total energy consumption.

Germany wants renewables to account for at least 80% of electricity production by 2030, up from 42% in 2021. At recent rates of expansion, though, that remains a remote goal.

Germany installed just 5.6 gigawatts (GW) of solar capacity and 1.7 GW of onshore wind capacity in 2021, the latest year on record.

To achieve the 80% goal, new onshore wind installations need to increase around six-fold to 10 GW annually, according to an October report by the federal government and Germany’s states. Solar installations must quadruple every year to 22 GW, it said.

Susi Dennison, senior policy fellow at the European Council on Foreign Relations (ECFR) think-tank, said that while Germany had done a “good sticking plaster job” by replacing gas volumes with power from the spot market, it had lost its standing as a thought-leader in clean energy.

“To me what’s really absent in Germany’s strategy is a similar attention to a rapid scaling up of renewables, that now is the time to invest in the infrastructure of hydrogen and wind power, to replace gas.”

In March, Economy Minister Robert Habeck set a target of replacing Russian energy by mid-2024, although many economists and power industry players believe this is too ambitious.

For instance, Marcel Fratzscher, president of the German Institute for Economic Research, and Markus Krebber, CEO of Germany’s biggest power producer RWE (RWEG.DE), reckon it will happen no sooner than 2025, and only then if alternative sources were found or expanded rapidly.

On the LNG front, too, there’s a mountain to climb.

Germany has no LNG infrastructure of its own because its longstanding reliance on Russian gas, so is only now starting to build its LNG import capability.

For the time being, it plans to rely on six floating import terminals to help diversify gas supply, the first of which is due to arrive on Thursday. Three are meant to come online this winter, with the rest to be deployed at the end of 2023, bringing total capacity to at least 29.5 bcm a year.

RWE, Uniper and smaller peer EnBW (EBKG.DE) have pledged to come up with the volumes to make sure the terminals run at full capacity until the end of March 2024. Nonetheless, it remains unclear where the volumes will come from.

Germany has only struck two firm LNG deals since the complete halt of Russian gas supplies in the summer, modest short-term agreements for the next two winter seasons, according to data from the ECFR.

The first is a 1 bcm a year deal between Australia’s Woodside and Uniper, which has since become the subject of Germany’s largest ever corporate bailout. The second was struck between Abu Dhabi National Oil Company and RWE and covers a delivery of 137,000 cubic metres in December and unspecified further shipments in 2023.

Uniper and RWE said they would be able to ensure further supplies via its their LNG portfolio, without giving further details. EnBW said supply contracts were still being worked out and that it was looking for opportunities in the market.

The hectic travel schedule of Habeck and Chancellor Olaf Scholz point to the difficulties in securing major long-term deals that could wean Germany off pricey spot power. They have criss-crossed the globe this year to hunt for additional volumes, including trips to Canada, Qatar, and Norway.

“I think Germany has been doing whatever it can,” said Giovanni Sgaravatti, research analyst at the Bruegel think-tank. “In the LNG market Germany had to start from scratch, which isn’t easy.” 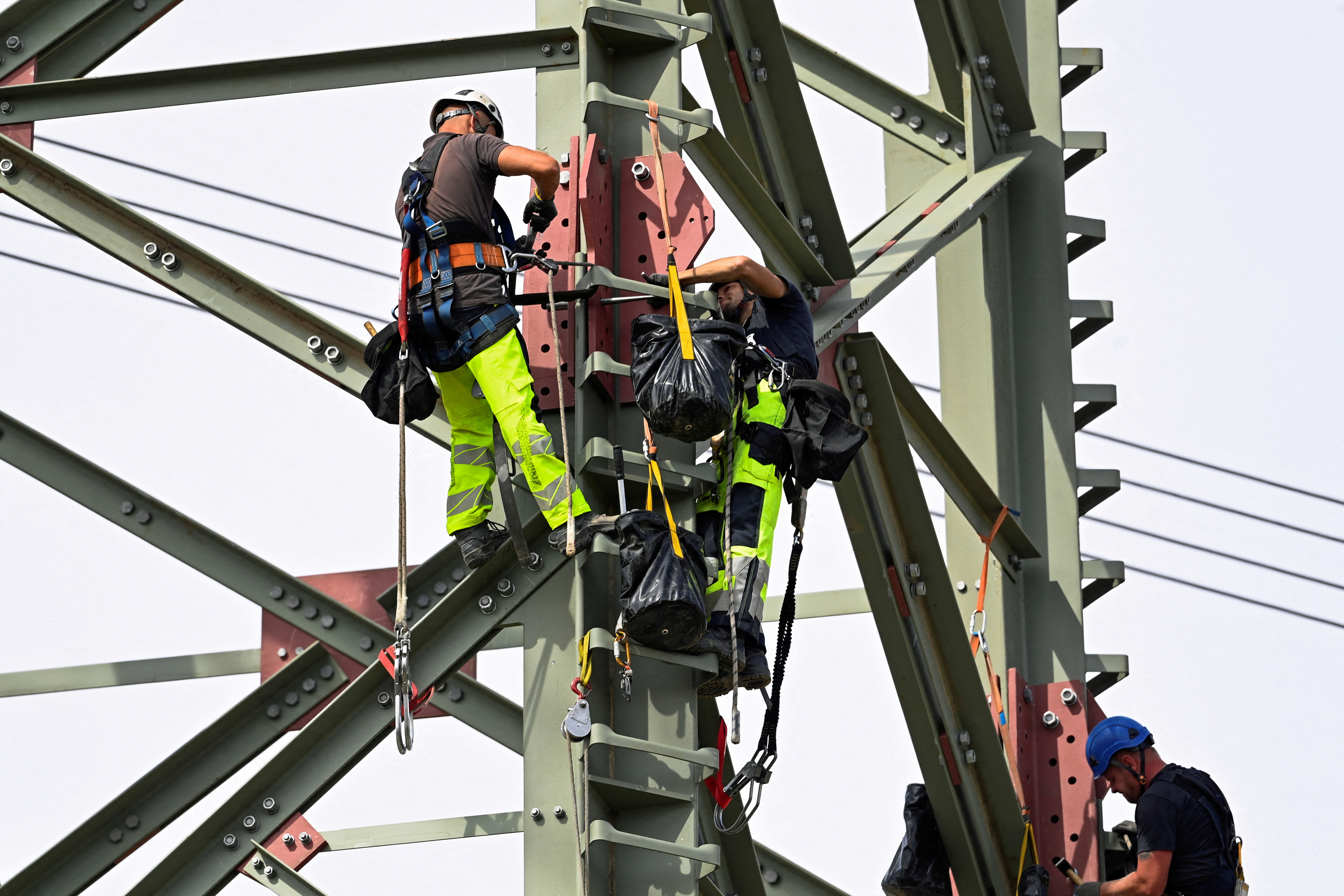 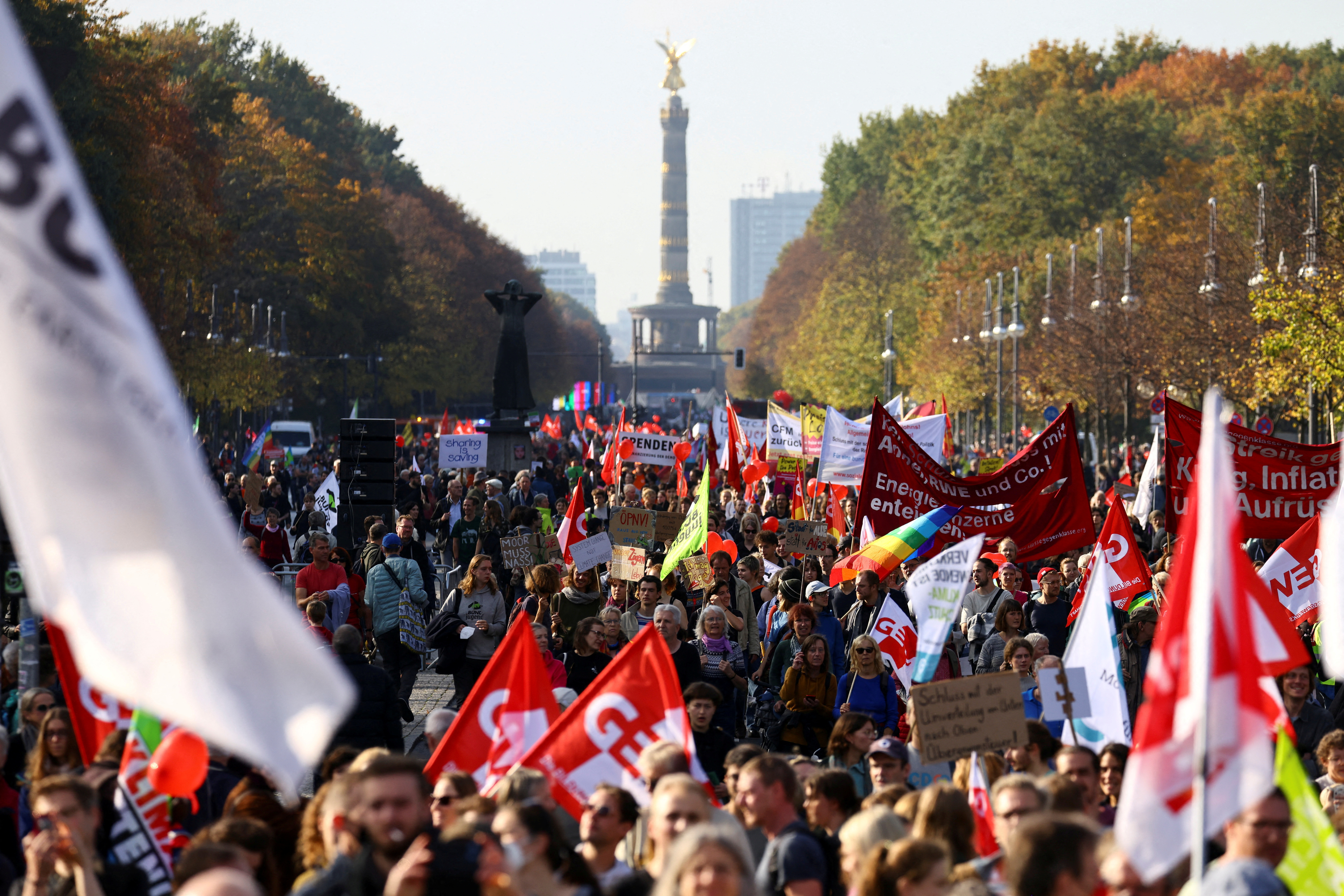 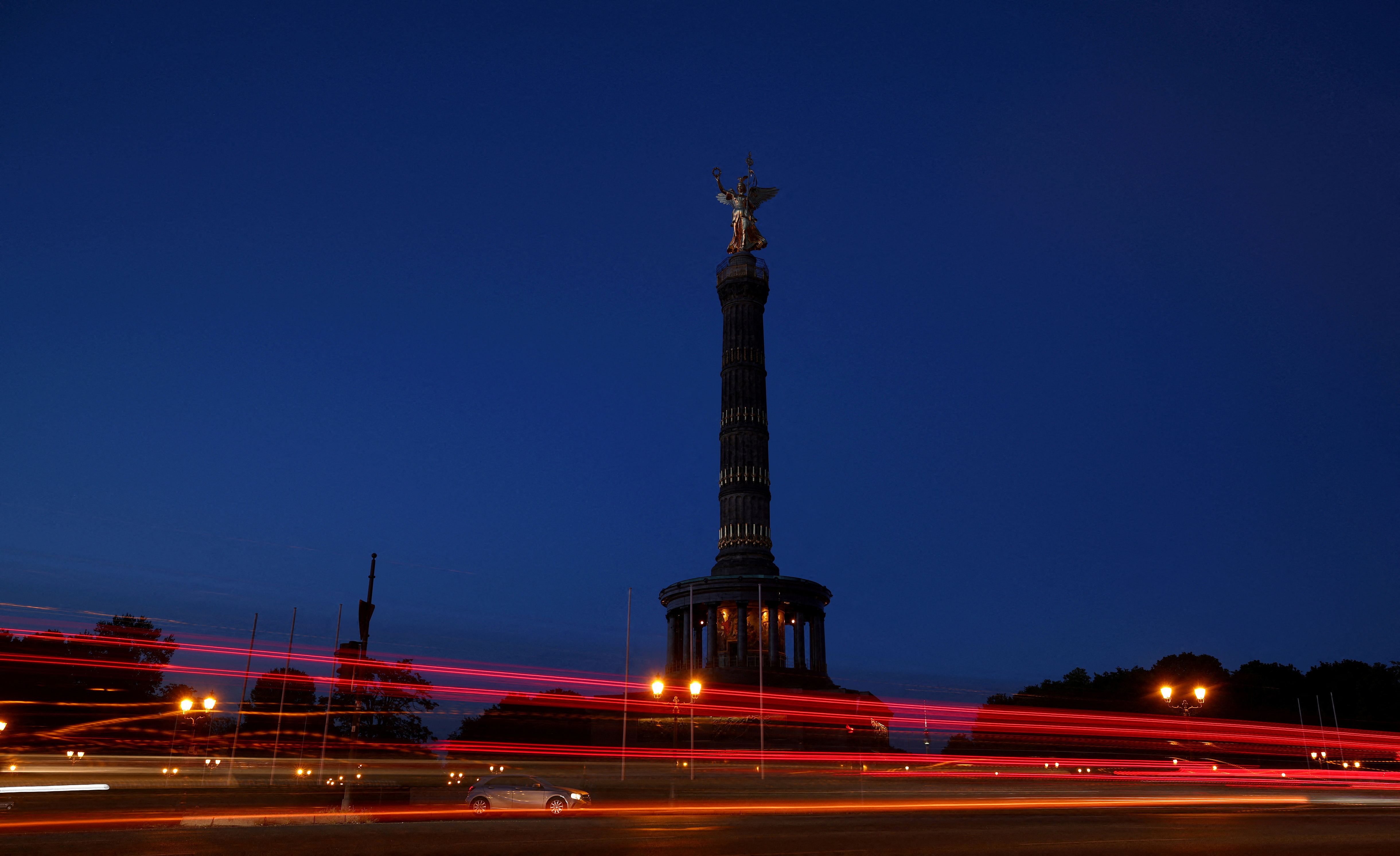 Cars make their way past the Victory Column shows a reduced lighting to save energy due to Russia’s invasion of Ukraine in Berlin, Germany August 6, 2022. REUTERS/Lisi Niesner