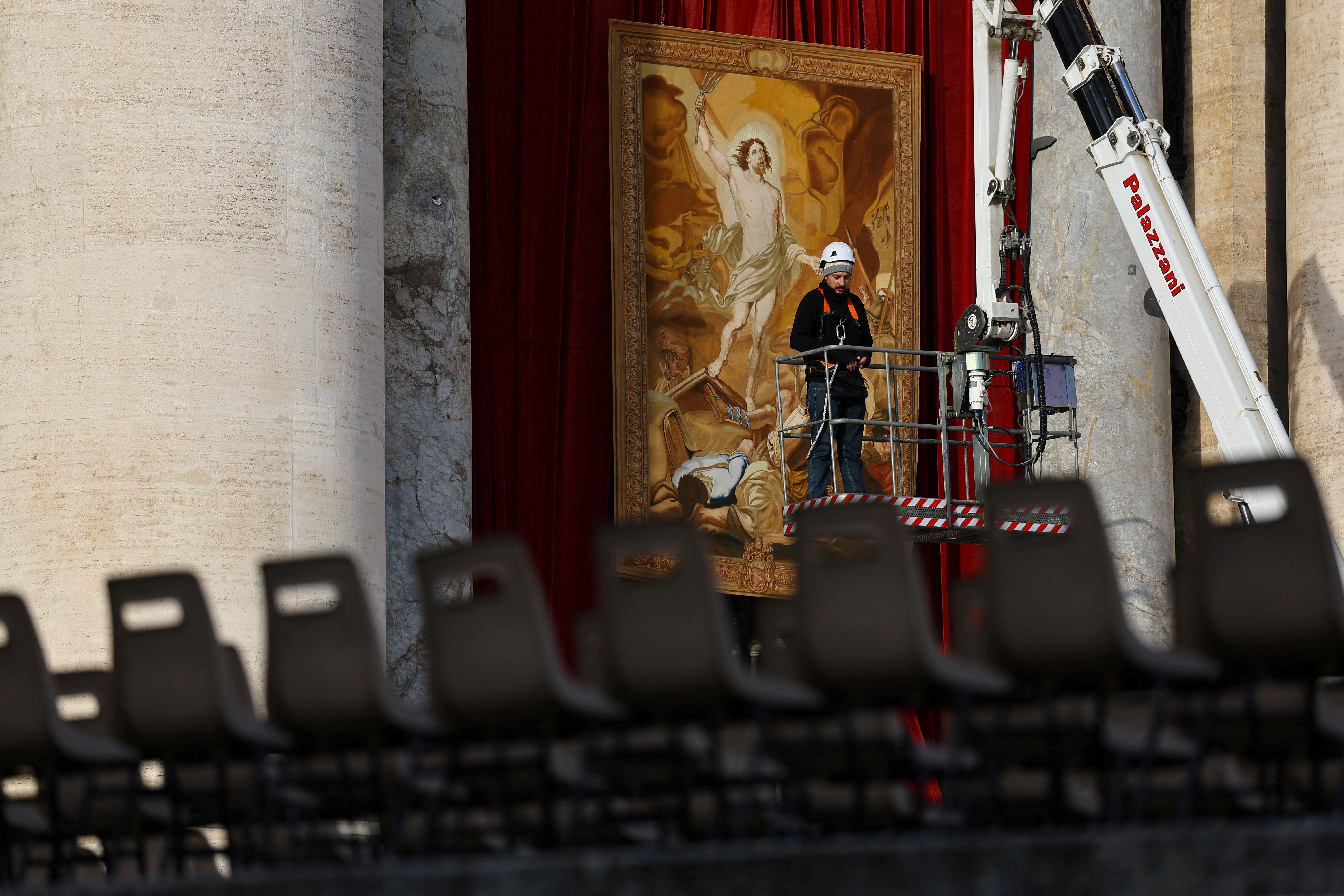 Preparations for former Pope Benedict’s funeral in operation outside St. Peter’s Basilica, while the former Pope’s body lies in state at the Basilica, at the Vatican January 4, 2023. REUTERS/Kai Pfaffenbach

Pope Francis will preside at a funeral Mass in St. Peter’s Square on Thursday for his predecessor former Pope Benedict, who died on Saturday at the age of 95.

More than 60,000 people are expected to attend. There will be official delegations from Italy and Benedict’s native Germany. Other leaders, including the king and queen of Belgium and about 13 heads of state or government, will attend in a private capacity. Most countries will be represented by their ambassadors to the Vatican.

Here is a guide to what is expected to happen:

After the end of his lying-in-state on Wednesday evening, Benedict’s body was placed in a cypress coffin which was closed privately in the presence of a few close aides, such as his long-time secretary, Archbishop Georg Ganswein, and other members of the household where he lived after he resigned the papacy in 2013, the first pope to do so in 600 years.

Papal items such as vestments symbolising his role as pope and bishop were placed inside the coffin, along with coins and medals that were minted during his pontificate. Also included was a lead tube with a deed in Latin listing the key points in his pontificate.

At 8:45 a.m. (0745 GMT), ushers known as papal gentlemen carried the coffin in procession out of the basilica and placed it on the steps facing St. Peter’s Square. The faithful will pray the rosary for about 45 minutes.

The funeral Mass presided over by Pope Francis is due to start at 9:30 a.m. (0830 GMT). At first, the pope will sit before the coffin facing the crowd. The Sistine Chapel choir will start its singing with the introductory rites.

The pope will then move to a chair to the side of the altar and preside from there, sitting most of the time because of knee aliment that impedes him from standing for too long. The celebrant standing at the altar will be Italian Cardinal Giovanni Battista Re, dean of the College of Cardinals.

Francis will deliver the homily at the Mass, which will be con-celebrated by 120 cardinals, 400 bishops and nearly 4,000 priests.

At the end of the Mass, Francis will recite “The Final Commendation and Farewell” asking God to “console the Church”.

The liturgy for the funeral Mass is based mostly on that for a pope who dies while reigning, with some minor modifications, particularly in a few prayers and readings.

One prayer will include petitions to God for both Benedict and Francis.

Near the end of the Mass, Francis will sprinkle holy water on the coffin and incense it.

He will say in Latin: “Gracious Father, we commend to your mercy Pope Emeritus Benedict, whom you made successor of Peter and shepherd of the Church, a fearless preacher of your word and a faithful minister of the divine mysteries.”

The choir will then sing in Latin: “May the angels lead you into paradise; may the martyrs come and welcome you and take you into the holy city, the new and eternal Jerusalem.”

The pall bearers will then carry the cypress coffin back into the basilica for a private service in which it will be sealed and wrapped in ribbons.

It will then be placed into a zinc coffin, which will be soldered shut. Both will then go into a larger, wooden coffin.

Benedict will then be buried according to his wishes in the same spot in the crypts under St. Peter’s Basilica where Pope John Paul II was originally interred in 2005 before his body was moved up to a chapel in the basilica in 2011.

The burial will also be a private service.