Global seed maker Syngenta will release a new type of wheat developed with complex cross-breeding techniques in the United States next year, beating out rival companies that are also trying to develop higher yielding wheat at a time of diminishing global grain supplies.

Syngenta, which began working on hybrid wheat in 2010, told Reuters enough seeds will be on the market next year for U.S. farmers to plant about 5,000 to 7,000 acres.

Though a tiny fraction of the nation’s plantings, the previously unreported total represents the company’s biggest ever release of hybrid wheat. It could open the door for larger seedings in 2024 and beyond, as war and climate change make the world’s food supplies increasingly vulnerable.

Growers of corn and other crops like barley have long benefited from hybrid seeds boosting yields. The road to market has been extra slow for wheat because the development process is more costly and difficult, and companies saw lower potential for returns, researchers said.

Benefits of the new crop are still not certain. Three independent seed companies that produced hybrid wheat this year under agreements with Syngenta told Reuters they were unsure the crop will deliver game-changing results for growers. They added that it will take longer to determine how to cost effectively produce the best seeds.

Syngenta’s French unit told Reuters the company postponed the launch of a similar type of wheat tested in France following disappointing results. The U.S. and French hybrids were tailored for local growing conditions, which can include threats from plant diseases and the need to meet quality standards for milling and baking, the company said.

Chinese-owned Syngenta said its U.S. wheat, to be sold under the AgriPro brand, could increase yields by as much as 12% to 15% and make crops more stable, adding that it is attracting strong interest from farmers.

Wheat “is the only major food crop that has not yet benefited from significant technification. Hybrids will change this,” said Jon Rich, Syngenta Seeds’ head of North America cereals operations.

Farmers have used hybrid seeds since the 1930s to grow corn, followed by other crops ranging from peanuts to tomatoes. Hybrid corn helped U.S. yields climb from 20 bushels per acre in 1930 to 140 bushels by the mid-1990s. By 1960, 95% of U.S. corn acres were planted with hybrid seed.

“Corn is really easy to do,” said Charlie Vogel, chief executive officer of the Minnesota Association of Wheat Growers. “It’s really hard with wheat so you need ideal conditions for the seeding.”

Other major global seed companies including Bayer AG (BAYGn.DE) and BASF SE (BASFn.DE) are developing hybrid wheat but are several years behind Syngenta. Unlike genetic modification, crop hybridization has not caused controversy among consumers. While widely used in soy and corn crops fed to livestock, changing plant genes has long been taboo for wheat that is made into bread and pasta.

Even so, Argentine startup Bioceres (BIOX.O) has gained varying levels of approvals for drought-resistant genetically modified wheat in Brazil, Nigeria, Australia and New Zealand, betting on rising consumer acceptance as the world struggles to feed a growing population faced with increasingly severe weather.

Harvests must also improve enough to convince farmers to buy new hybrid seeds each year, instead of saving wheat from previous harvests as many do with conventional seeds, researchers said.

In Park River, North Dakota, Hankey Seed Company grew Syngenta’s hybrid wheat seeds on 30 acres and also produced the crop for grain on 80 acres as a test for future customers, owner Dave Hankey said. He planted the wheat grown for grain on his best soil and said it produced his best yield.

“It will be considerably more expensive and I probably don’t have real good data to show that it will be worth the extra expense,” Hankey said.

Hybrid wheat can produce more uniform results across fields than conventional wheat, and may deliver better yields on poor soil, Hankey said. He declined to talk specifics due to a nondisclosure agreement with Syngenta.

To produce hybrid seeds, Hankey said he planted a mixture of male and female plants in his fields and then surrounded them with a border of male plants to ensure their pollen was the only pollen available to the females.

Hankey even hired a crop duster to fly over half of his 30 acres to test whether the plane would move more pollen around in the air and improve fertilization. He said he did not notice a difference.

“You just plain need the right, light wind – not too much, not too little – for that pollen to waft across right at the time when the female plant is opened up ready to receive it,” said Kevin Capistran, co-owner of Capistran Seed Company in Minnesota who also produced Syngenta’s hybrid wheat seeds.

Another company, Noeske Seed Farm in Valley City, North Dakota, said it grew 80 acres of Syngenta’s hybrid wheat for grain. Yields were unremarkable, though the crop was planted late due to excessive rains, a representative said.

The U.S. farmers who grow hybrid wheat next year will connect directly with Syngenta Seeds to provide crop data the company will use to improve subsequent hybrids, ahead of a full commercial launch in 2024, Syngenta said. Farmers will receive a discount on seeds to encourage feedback, the company said.

“We understand the uncertainty that some farmers may have, especially when the industry has attempted to make hybrid wheat viable in decades past,” Syngenta’s Rich said.

Syngenta projected in 2015 that its annual sales of hybrid wheat seeds could potentially reach $3 billion by 2032. It declined to provide an updated forecast.

Syngenta’s French unit said it hopes to market a variety of hybrid wheat in France in 2025, after its first hybrids there failed to reach yield targets in trials during a hot, dry year. The company said that while the first hybrids “matched the best results on the market, we need to go beyond that.”

The world’s wheat stockpile is projected to shrink to a mere 98-day inventory by the end of the 2022/2023 marketing year, the lowest in eight years, according to U.S. government data.

Germany’s BASF plans to launch hybrid wheat seeds, known as Ideltis, in Europe, the United States and Canada in the second half of the decade, said Peter Eckes, president of research and development for BASF Agricultural Solutions.

Bayer, meanwhile, said its hybrid wheat will also be released “by the later part of this decade,” and that it has seen yield increases of about 15% or more in trials. The company ramped up development work over the last three years and the Ukraine crisis has amplified supply concerns, said Frank Terhorst, Bayer Crop Science’s head of strategy and sustainability.

“Hybrid wheat has been a dream of seed developers since the 1950s,” said Claude Tabel, former president of French seed makers association UFS. “Everyone is working on it.” 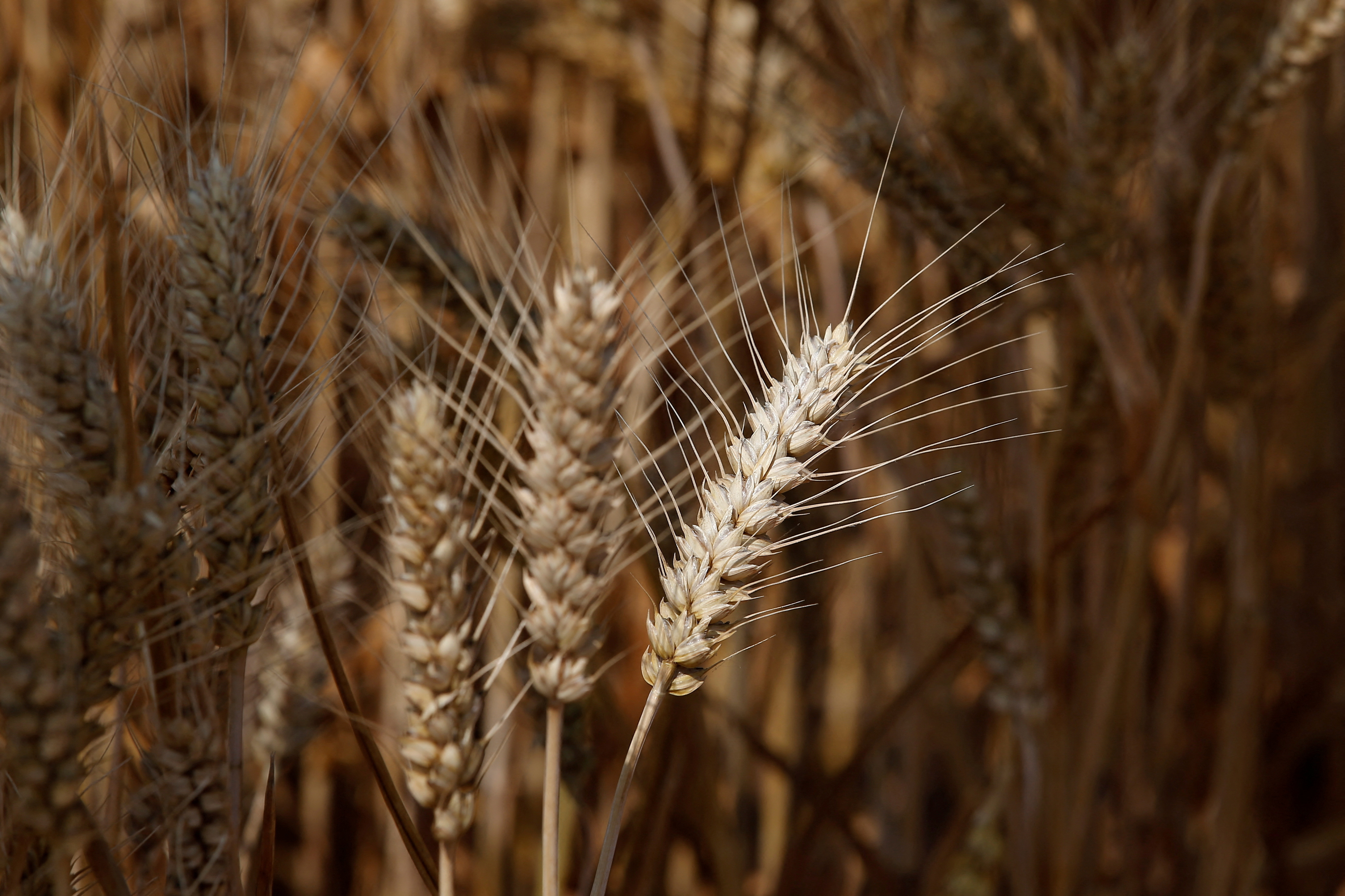 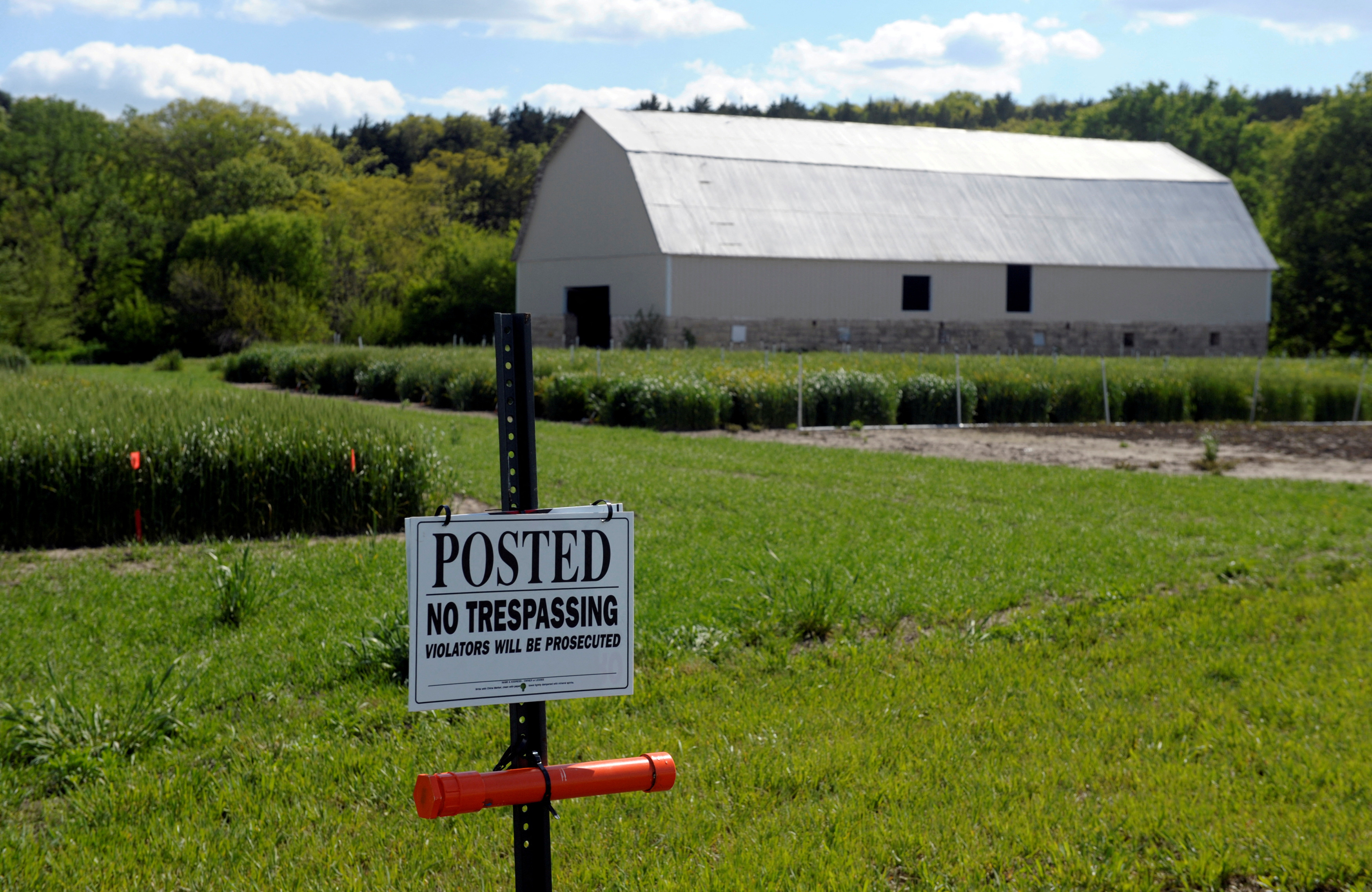 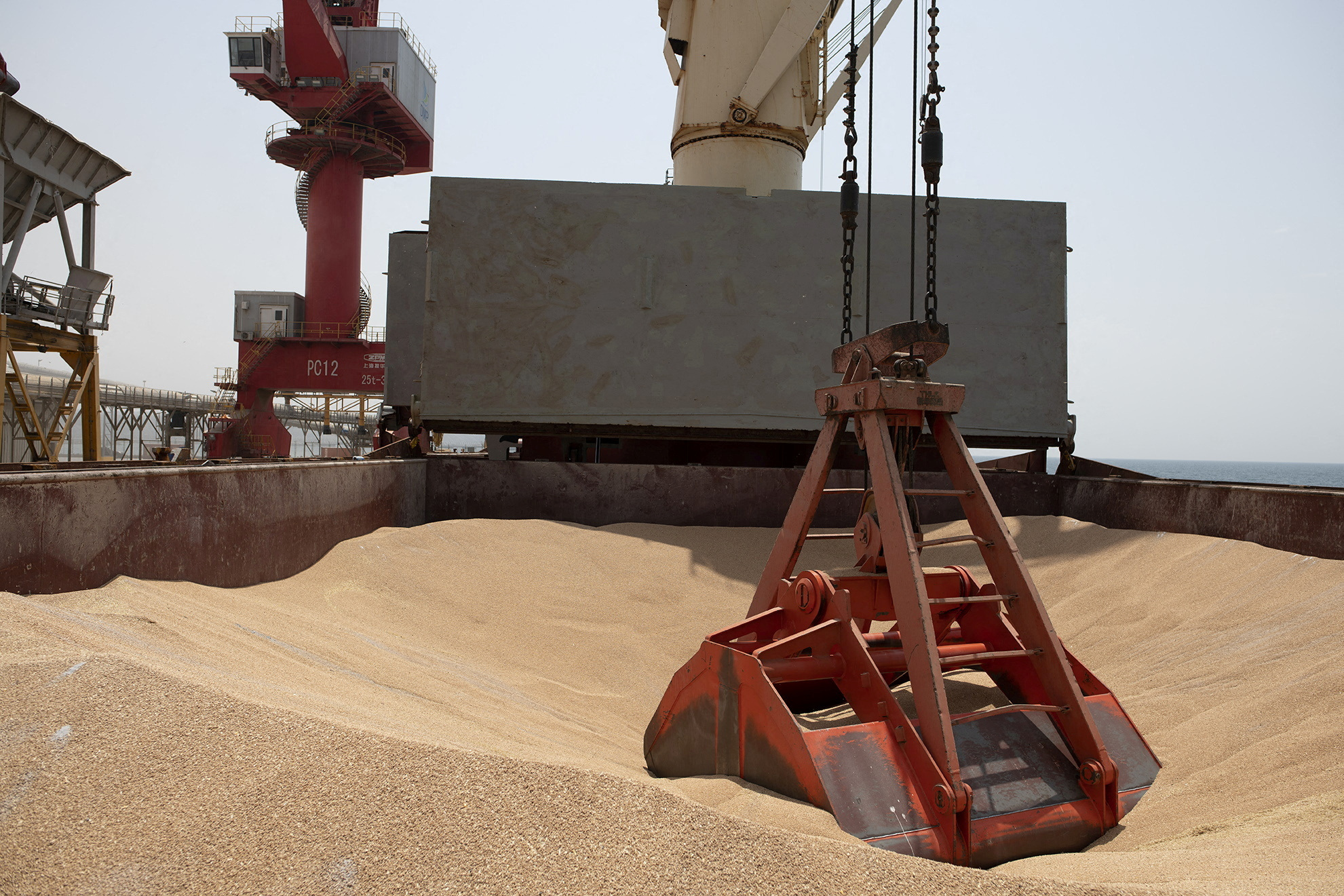 Wheat grain is seen on the MV Brave Commander vessel from Yuzhny Port in Ukraine to the drought-stricken Horn of Africa as it docks at port of Djibouti in Djibouti August 30, 2022. Hugh Rutherford/World Food Programme/Handout via REUTERS 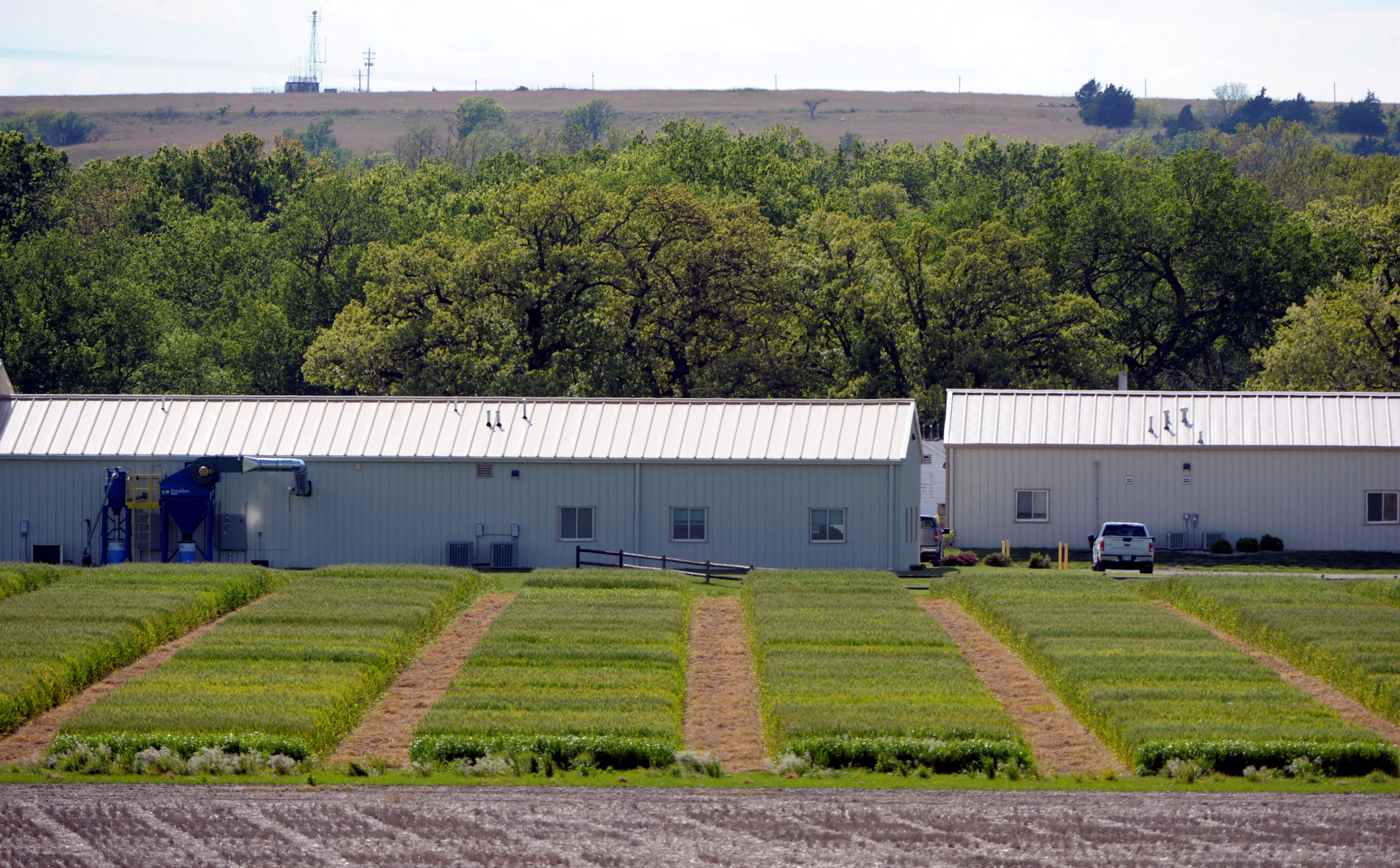