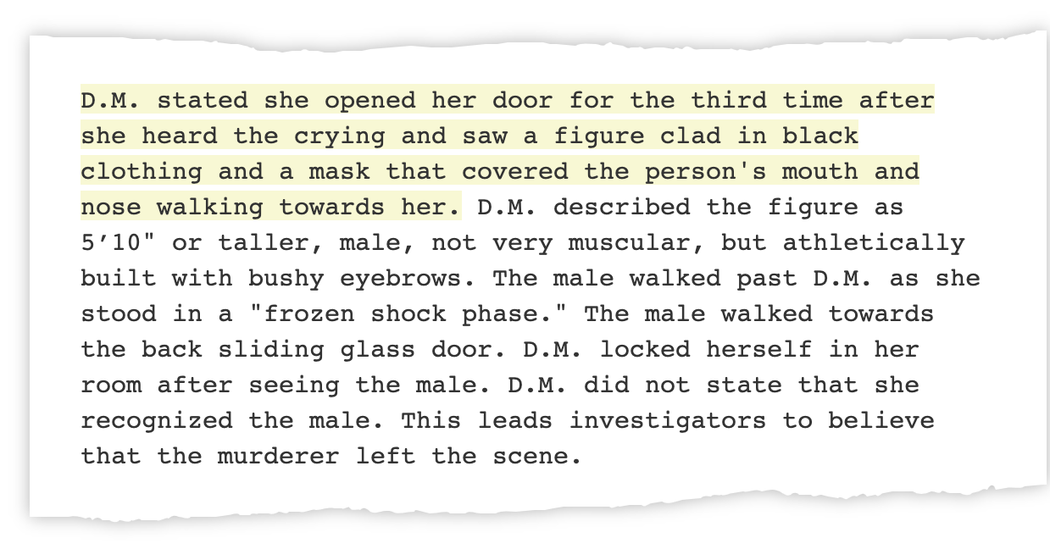 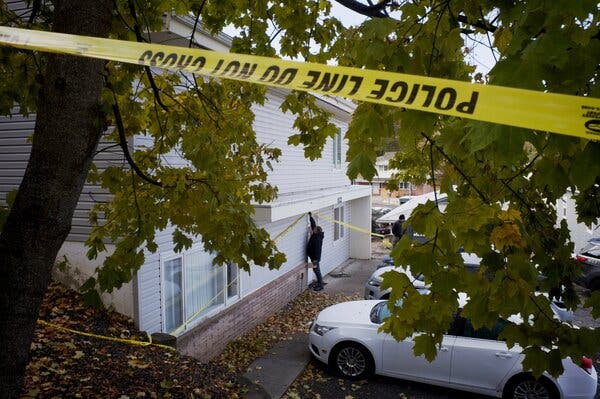 The students were found dead in a rented house near the University of Idaho campus in Moscow, Idaho.Credit…Rajah Bose for The New York Times

MOSCOW, Idaho — After weeks of unease over the murders of four University of Idaho students in a house near campus, the authorities this week released their most detailed account yet of the investigation that led them to arrest a criminology student from a nearby university.

The documents detail an array of evidence about the suspect, Bryan Kohberger, 28, a graduate student at Washington State University, who said through a lawyer that he looks forward to being exonerated. The records also provided jarring new details about the night the four students were murdered, while raising fresh questions about a mystifying case in which authorities have not explained a possible motive.

Here are 10 key revelations made public on Thursday.

D.M. stated she opened her door for the third time after she heard the crying and saw a figure clad in black clothing and a mask that covered the person’s mouth and nose walking towards her. D.M. described the figure as 5’10″ or taller, male, not very muscular, but athletically built with bushy eyebrows. The male walked past D.M. as she stood in a “frozen shock phase.” The male walked towards the back sliding glass door. D.M. locked herself in her room after seeing the male. D.M. did not state that she recognized the male. This leads investigators to believe that the murderer left the scene.

Investigators had previously suggested that two roommates who were inside the house on the night of the crime and were not attacked had been sleeping. But the records show that one of them awoke around 4 a.m. after hearing noises, a man’s voice and crying. That was around the time the authorities believe the killings occurred.

That roommate, according to the records, eventually watched from her room as a man in black clothing with a mask on his face walked past her toward the home’s back door. She reported locking her own bedroom door at that point, but it’s unclear from the records what transpired afterward.

Authorities were not summoned to the scene for more than seven hours.

I also later noticed what appeared to be a tan leather knife sheath laying on the bed next to Mogen’s right side (when viewed from the door).

The police said they were able to get a DNA sample from a button snap on the sheath, and later found a connection between that sample and DNA collected from Mr. Kohberger’s parents’ home in Pennsylvania.

That may prove to be a key piece of evidence, as authorities seek to tie Mr. Kohberger to the scene of the crime.

Pursuant to records provided by a member of the interview panel for Pullman Police Department we learned that Kohberger’s past education included undergraduate degrees in psychology and cloud-based forensics. These records also showed Kohberger wrote an essay when he applied for an internship with the Pullman Police Department in the fall of 2022. Kohberger wrote in his essay he had interest in assisting rural law enforcement agencies with how to better collect and analyze technological data in public safety operations.

Mr. Kohberger had long taken an interest in criminology and criminal law.

He studied in Pennsylvania in part under Katherine Ramsland, a forensic psychologist whose books include “The Mind of a Murderer” and “How to Catch a Killer.” He researched the psychology of criminals when they committed crimes.

In search of a suspect. Authorities went weeks without identifying a suspect, pleading with the public for tips and videos that could help them piece together what had led to the crime. On Dec. 30, the police arrested Bryan C. Kohberger, a 28-year-old criminology student at Washington State University, about 10 miles from Moscow, and charged him with murder.

Extradition to Idaho. Mr. Kohberger was taken into custody at his parents’ home in the Pocono Mountains of Pennsylvania. On Jan. 4, authorities transported him by plane from Pennsylvania, where he had made an initial court appearance the day before, to Idaho. During that hearing, the suspect agreed to be extradited.

The charges. Mr. Kohberger faces four counts of first-degree murder and one count of felony burglary. Authorities have yet to detail a motive in the case or how investigators came to identify him as a suspect. Mr. Kohberger has said he looks forward to being exonerated, according to his public defender in Pennsylvania.

At Washington State University, he was pursuing a Ph.D., engaging in a class on DNA evidence and forensics in the weeks before the killings, while continuing to grade papers in the weeks afterward.

Authorities also disclosed that Mr. Kohberger had applied in recent months for an internship at the police department in Pullman, Wash., less than 10 miles from the University of Idaho campus in Moscow. He wrote an essay as part of the application in which he described his interest in helping rural police departments collect and analyze data.

A review of footage from multiple videos obtained from the King Road Neighborhood showed multiple sightings of Suspect Vehicle 1 starting at 3:29 a.m. and ending at 4:20 a.m. These sightings show Suspect Vehicle 1 makes an initial three passes by the 1122 King Road residence and then leaves via Walenta Drive. Based off of my experience as a Patrol Officer this is a residential neighborhood with a very limited number of vehicles that travel in the area during the early morning hours. Upon review of the video there are only a few cars that enter and exit this area during this time frame.

On the night of the killings, investigators said, a white automobile could be seen on surveillance footage repeatedly passing through the dead-end street where the victims lived.

The vehicle, which the police said was a Hyundai Elantra, started appearing around 3:29 a.m., passing by the area three times before returning for a fourth time at 4:04 a.m., around the time that the surviving roommate was awakened and that the police believe the killings occurred. The vehicle, the police said, could be seen speeding away from the area at 4:20 a.m.

At approximately 4:17 a.m., a security camera located at 1112 King Road, a residence immediately to the northwest of 1122 King Road, picked up distorted audio of what sounded like voices or a whimper followed by a loud thud. A dog can also be heard barking numerous times starting at 4:17 a.m. The security camera is less than fifty feet from the west wall of Kernodle’s bedroom.

At around 4:17 a.m., a security camera near the home of the victims picked up distorted audio of what sounded like a whimper and a loud thud, investigators said. They also said a dog could be heard barking numerous times.

After the killings were discovered, police officers arriving at the house found a dog in one of the rooms. The dog belonged to one of the victims, Kaylee Goncalves.

D.M. and B.F. both made statements during interviews that indicated the occupants of the King Road Residence were at home by 2:00 a.m. and asleep or at least in their rooms by approximately 4:00 a.m. This is with the exception of Kernodle, who received a DoorDash order at the residence at approximately 4:00 a.m. (law enforcement identified the DoorDash delivery driver who reported this information).

While the coroner has said that all four victims were probably asleep at the time of the killings, investigators suggested in the new court records that at least one of them may have been awake.

Xana Kernodle received a DoorDash delivery around 4 a.m., just before the arrival of the white vehicle, the investigators said. A forensic review of her phone also suggested that she was using the TikTok app at around 4:12 a.m.

On November 25, 2022, MPD asked area law enforcement agencies to be on the lookout for white Hyundai Elantras in the area. On November 29, 2022, at approximately 12:28 a.m., Washington State University (WSU) Police Officer Danicl Tiengo, queried white Elantras registered at WSU. As a result of that query he located a 2015 white elantra with a Pennsylvania license plate LFZ-8649.

With the surveillance video in hand, the police began scouring the region for white Hyundai Elantras, and a campus police officer at Washington State University found one in November registered to Mr. Kohberger.

Investigators said they reviewed images of Mr. Kohberger and found that his physical appearance matched the recollection of the roommate who saw a man in the house, including his height, build and bushy eyebrows.

Police initially said they were looking for a 2011-13 Elantra, but later determined that it could also be from a model year as late as 2016. Mr. Kohberger had a 2015 Elantra.

At approximately 2:47 a.m. the 8458 Phone stops reporting to the network, which is consistent with either the phone being in an area without cellular coverage, the connection to the network is disabled (such as putting the phone in airplane mode), or that the phone is turned off.

By the end of December, investigators were able to get records of the location of Mr. Kohberger’s cellphone.

The phone reconnected to the network at 4:48 a.m., at a location miles to the south of the University of Idaho. The phone eventually traveled back to Pullman.

Specifically, the 8458 Phone utilized cellular resources that would provide coverage to the King Road Residence between 9: 12 a.m. and 9:21 a.m.

Several hours after the killings, at around 9:12 a.m., Mr. Kohberger’s phone was detected in Moscow, connecting to the cellular network near the scene of the murders and staying there for nine minutes, according to the police records.

The phone then returned to the area of his home in Pullman. At that point in the morning, no one had called 911, so the police had not yet gone to the crime scene.

On December 27, 2022, Pennsylvania Agents recovered the trash from the Kohberger family residence located in Albrightsville, PA. That evidence was sent to the Idaho State Lab for testing. On December 28,2022, the Idaho State Lab reported that a DNA profile obtained from the trash and the DNA profile obtained from the sheath, identified a male as not being excluded as the biological father of Suspect Profile. At least 99.9998% of the male population would be expected to be excluded from the possibility of being the suspect’s biological father.

In the days after obtaining Mr. Kohberger’s phone records, investigators were in Pennsylvania, where Mr. Kohberger had driven for the holidays with his father.

Agents there recovered trash from the home of Mr. Kohberger’s family and shipped it to Idaho. Investigators said they worked to match a DNA profile found in the trash to a DNA sample collected from the knife sheath found at the crime scene. The analysis, the police said, suggested a strong likelihood that the elder Mr. Kohberger was the father of whoever left DNA on the knife sheath.