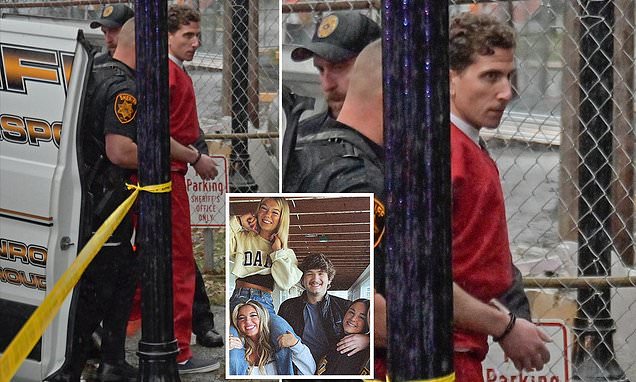 Idaho murders suspect Bryan Kohberger has arrived at court in Pennsylvania for an extradition hearing that will send him back to the state where he is accused of murdering four college students in cold blood.

Kohberger, 28, denies the murders but is not fighting extradition – rather he says he is eager to get back to Idaho, where he can answer the charges formally.

The PhD student was arrested at his parents’ house in Pennsylvania on Friday. His  family insists police got the wrong man, despite investigators claiming that his DNA matches a sample found at the scene on November 13.

Kohberger will go before a judge today at 3.30pm. He arrived at the court hours earlier amid a swarm of Pennsylvania State Troopers and media.

He was seen entering the court wearing a red prison jumpsuit and handcuffs, though he did not appear to be shackled by the feet.

Scroll down for video

Bryan Kohberger arrives at Monroe County Courthouse in Stroudsburg, Pennsylvania, for an extradition hearing on Tuesday. He is accused of murdering the four Idaho students found stabbed to death on November 13

There will not be a live feed to the hearing, but a select number of photographers are allowed inside along with journalists.

Much of the case remains a mystery due to the fact that he was arrested in a different state than where the crime took place.

Prosecutors are yet to provide a motive for Kohberger, and it remains unclear if he knew any of the victims.

He believes he’s going to be exonerated. That’s what he believes. Those were his words.

Those details are expected to emerge in the probable cause affidavit, a charging document that remains sealed but that will become public once Kohberger is back in Idaho.

Kohberger’s family insists he is innocent.

‘This is certainly completely out of character, the allegations, and really they’re just trying to be supportive with the understanding these four families have suffered loss, so they’re sympathetic towards that, and that’s why it should remain really private and they don’t want to try this case in the court of public opinion,’ LaBar told NBC News.

LaBar said Kohberger has been ‘easy to talk to’ and is confident he will be exonerated.

‘He believes he’s going to be exonerated. That’s what he believes. Those were his words. He’s been very easy to talk to. Actually, he’s in a calm demeanor.’

The accused killer appeared to enter the court through a side door. His hearing is not until 3.30pm

LaBar also told ABC News that he is ‘calm’ and ‘polite’ behind bars, where corrections officers have been ‘very accommodating’ of his vegan diet.

He added that Kohberger ‘understands the seriousness’ of the charges and that the death penalty is on the table.

He is said to have told his attorney: ‘This will be a long process.’

LaBar has ordered a psychiatric evaluation after learning of how Kohberger has behaved behind bars.

KHQ reports that he’d been sitting ‘in a ball on the floor’, barely speaking to guards.

LaBar is a public defender in Pennsylvania who was assigned the case following Kohberger’s arrest.

He is not expected to represent him in Idaho, and said no other private attorneys had come forward to offer their services to him or his family.

‘They’re not hiring an attorney.

‘Given the situation, given the charges, no attorneys have reached out to them, and they’re not anticipating hiring an attorney,’ he said.

He has been in contact with Idaho’s Public Defense Commission to help the family find a new attorney.

The victims’ families are eagerly awaiting Kohberger’s extradition, and for the probable cause affidavit to become public.

Kohberger’s attorney says he denies the killings and is ‘eager’ to get back to Idaho to be ‘exonerated’. Victims Maddie Mogen, Kaylee Goncalves, Ethan Chapin and Xana Kernodle are pictured

The suspect was attending college in nearby Washington State, where he pursued criminology

The crime took place six weeks ago, 2,500 miles from where Kohberger was arrested. His father flew to meet his son in Washington and drove with him back to their Pennsylvania home

Police were on the hunt for Kohberger’s white Hyundai Elantra, which officials began tracking around Christmas time as the suspect drove across the country

Kaylee Goncalves’ father Steve appeared on Good Morning America on Tuesday morning along with his attorney.

He said Kohberger’s arrest came as a ‘relief’ after weeks of uncertainty.

‘It felt like a cloud was lifted. It’s like seeing sunlight after being stuck in a house for a month.

‘It provided relief and comfort to know things were progressing, and that all this torture and waiting had a purpose and a meaning,’ he said.

Kohberger was arrested at his parents’ home in Albrightsville, Pennsylvania, on Friday